Why fixing the second issue isn’t possible without addressing the first.

First Papiya was forced into marriage at 12 years old. Then she was trafficked into sexual slavery.

Her story isn’t unusual. It’s echoed by tens of thousands of girls in Bangladesh, highlighting a link between child marriage and sex trafficking that should be impossible to ignore. The country with the highest rate of marriage involving girls under the age of 15 in the world, and where 150,000 to 200,000 children and young women have been trafficked into prostitution, the two forms of abuse are tightly intertwined. Traffickers prey on the vulnerable, and child marriage is what makes girls like Papiya vulnerable in the first place.

But international donors, policymakers, and even the U.S. State Department have failed to recognize this chain of exploitation, and that’s slowing down efforts to address it.

First Papiya was forced into marriage at 12 years old. Then she was trafficked into sexual slavery.

Her story isn’t unusual. It’s echoed by tens of thousands of girls in Bangladesh, highlighting a link between child marriage and sex trafficking that should be impossible to ignore. The country with the highest rate of marriage involving girls under the age of 15 in the world, and where 150,000 to 200,000 children and young women have been trafficked into prostitution, the two forms of abuse are tightly intertwined. Traffickers prey on the vulnerable, and child marriage is what makes girls like Papiya vulnerable in the first place.

But international donors, policymakers, and even the U.S. State Department have failed to recognize this chain of exploitation, and that’s slowing down efforts to address it.

Since March 2017, I have interviewed over 400 women trapped behind the walls of four brothels in Bangladesh, in an investigation that was funded by the nonprofit organization Girls Not Brides. Marriage is illegal for girls under the age of 18 (and boys under 21) in Bangladesh under the 1929 Child Marriage Restraint Act (which was updated in 2017), although the law allows girls under 18 to marry under “special circumstances”—without establishing a minimum age limit, or clarifying what those circumstances must be. Half of the girls I spoke with told me that they had been married before the age of 18 and believed they had been trafficked into sexual slavery as a direct result.

Yet for all the obvious overlap, trafficking and child marriage in Bangladesh are viewed independently of one another by the U.S. State Department —and initiatives to end both are kept separate as a result. While child marriage is largely approached by nonprofit organizations through a lens of legislative lobbying and education as prevention, counter-trafficking efforts center on rescue, rehabilitation, and prosecution. Projects that work to prevent trafficking focus on unmarried girls who are still in school.

Approximately 52 percent of girls in Bangladesh are lost in the chasm between child marriage prevention and trafficking rehabilitation: coerced into marriage as children and left without the support they need to protect themselves and safely break out. 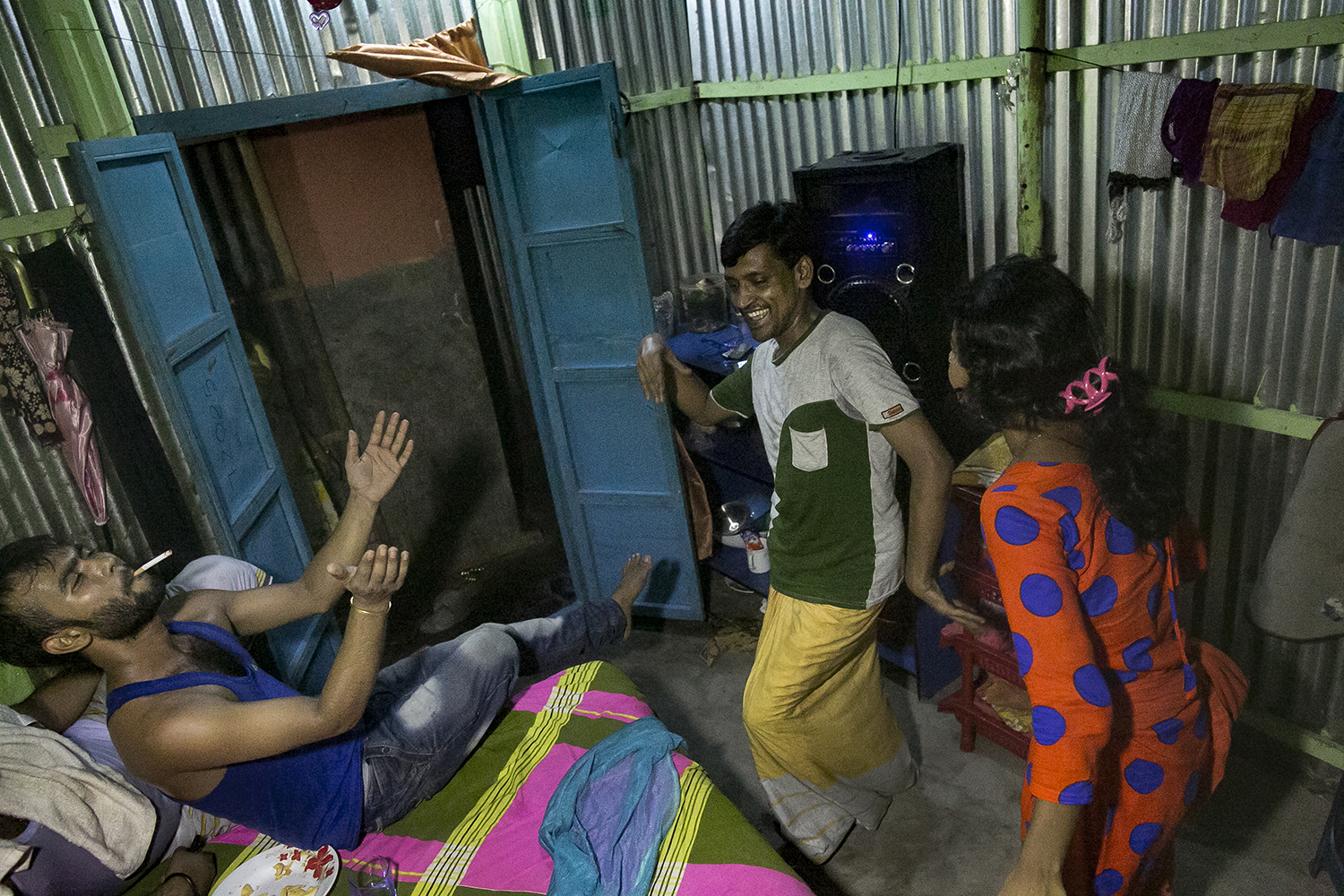 Customers pass time with Papiya at the Kandipara brothel where Mohammed Ashreful, in yellow, has lived since his childhood, on Aug. 17, 2017. Allison Joyce for Foreign Policy

Papiya was still trapped in a brothel in the village of Kandipara when I first met her in March 2017. She told me how she fled her in-laws’ house barefoot in the middle of the night, leaving her sandals by the door so that slap of their soles on the stairs didn’t wake her 22-year-old husband. As the sun rose, she spotted a rickshaw driver sleeping by the side of the road and begged him for help. He agreed with a smile, she remembered. Then he drove Papiya to a brothel and sold her for more money than he’d usually make in a month.

Approximately 52 percent of girls in Bangladesh are lost in the chasm between child marriage prevention and trafficking rehabilitation.

Now 17, Papiya has been trapped in one of Bangladesh’s 11 government-registered, legal brothel villages ever since. Each one enslaves up to 3,000 women and underage girls in sexual servitude that can see them raped up to 11 or 12 times a day. Abdulla al-Mamun, the director of child protection and child rights governance at Save the Children International, says he receives reports of four or five children being trafficked to the country’s largest brothel every month.

Reporting from inside these brothels never gets easier. As lines of men jostle through the entry gates and policemen patrol the brothel streets for signs of drugs or disorder, Papiya and her friends lie on their beds in windowless metal cells and self-harm in a last-ditch attempt at temporary escape. 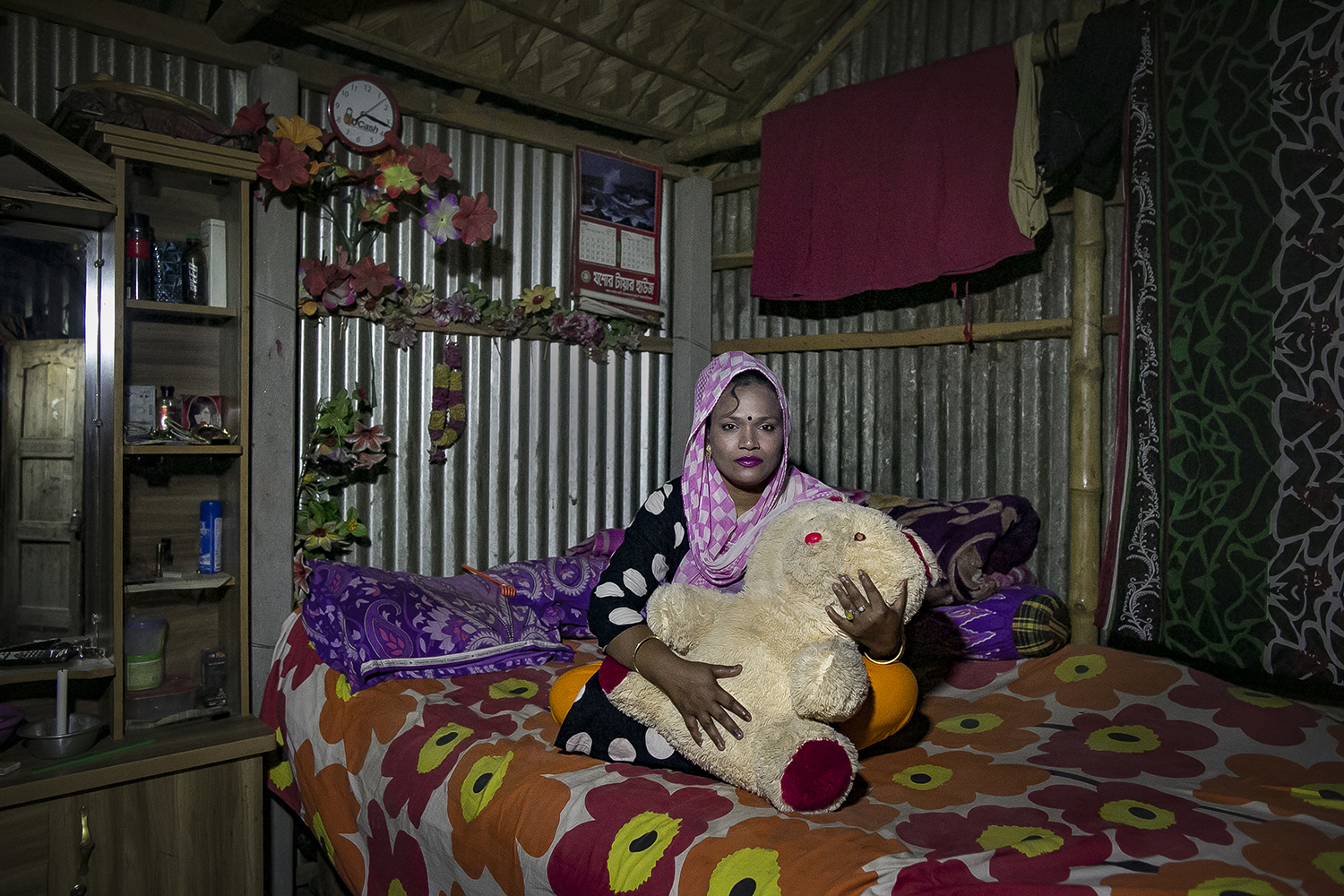 Hajera, who married at 12 before she was trafficked to the Kandipara brothel, sits in her room there on March 28, 2017. Allison Joyce for Foreign Policy

None of the girls came here consensually. For some, it was their husbands who sold them to the brothels—each man opting to free himself from the constraining role of babysitter in a marriage in which his child wife might feasibly sleep with a teddy bear, and earning about 300,000 taka, $3,500, in the process. But the majority of the girls shared the same story: Like Papiya, they also refused to accept the life of sexual violence and abuse that they found themselves forced into in the name of marriage, and they were willing to risk their lives to escape it.

Despite such widespread evidence of child marriage as a precursor to sex trafficking, the connection is consistently overlooked.

A few were picked up by traffickers as they attempted to make their way home. Others, like Rupa, Sony, Jinuk, crossed sunken rice fields and railway lines, only to find themselves rejected by their families for the social shame that accompanies a daughter who flees a life of exploitation. Within days, alone at a bus stop or a train station, each girl was approached by a man or woman proffering help and a place to stay for the night. They were drugged and sold to the brothel before they could understand what was going on.

Despite such widespread evidence of child marriage as a precursor to sex trafficking, the connection is consistently overlooked. The Bangladesh National Women Lawyers Association has been working to provide legal assistance and shelter to abused women across Bangladesh since 1979, but staff say they have found themselves struggling to make international donors understand the crossover between underage marriage and modern-day slavery. Funding for their anti-trafficking work has increased since 2017, but little support comes for cases that involve domestic violence or girls who need to flee their marriage.

“It is hard to make our donors see that these problems are all linked,” said Towhida Khondker, the director of the lawyers association. “They are all forms of violence, and one can quickly lead to another.” 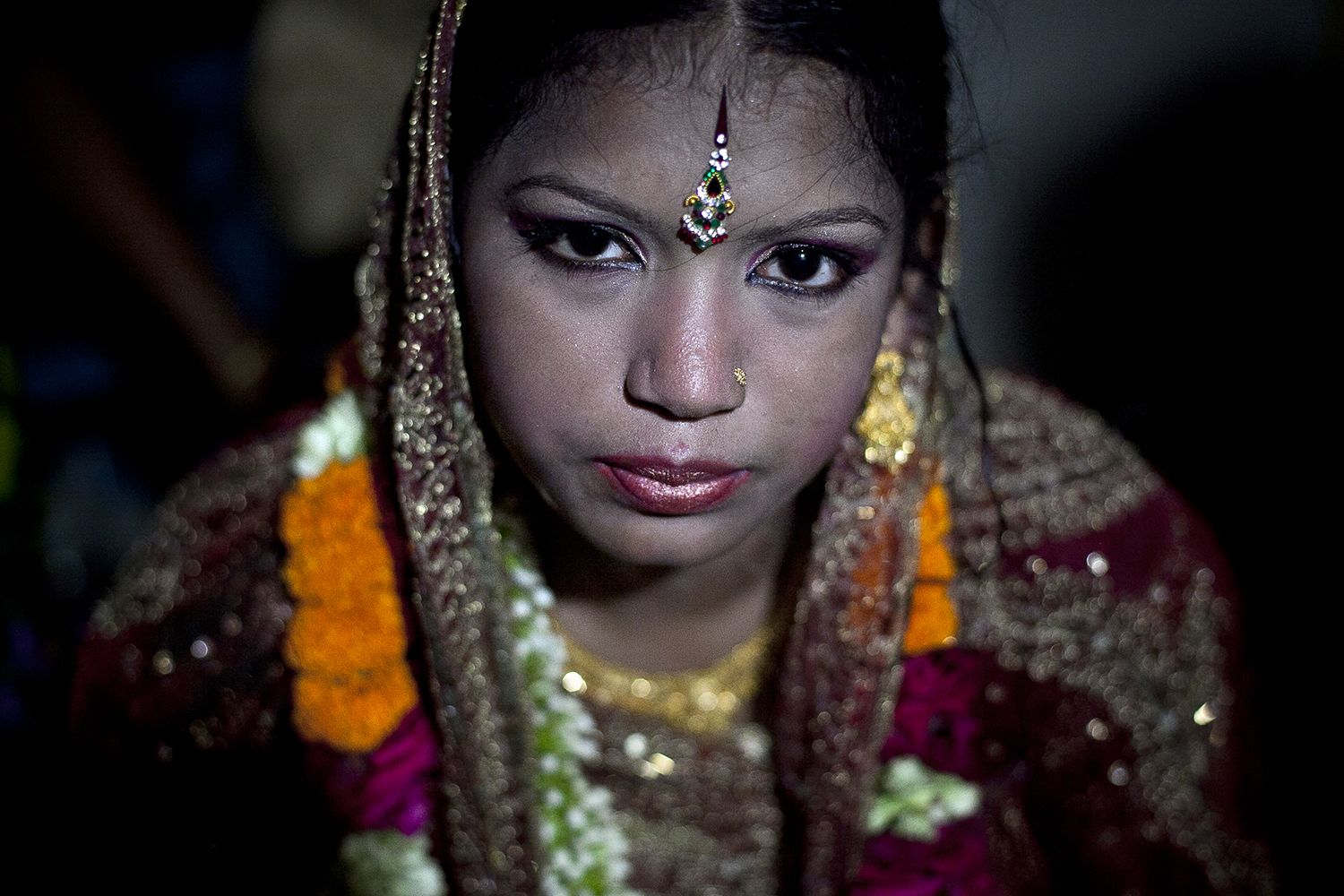 Thirteen-year-old Runa Akhter is seen the day of her wedding to a 29-year-old man in Manikganj, Bangladesh, on Aug. 29, 2014. Allison Joyce

One agency with the influence to effect change is the U.S. State Department’s Office to Monitor and Combat Trafficking in Persons. Were they to take child marriage into consideration when assessing human trafficking in Bangladesh, local nonprofit organizations believe countertrafficking initiatives would likely be expanded to target the country’s most defenseless demographic: underage brides.

Since 2001, the United states has purported to hold foreign—often low- and middle-income—countries accountable for failing to adequately implement countertrafficking measures set out by the U.S. Trafficking Victims Protection Act, as established in 2000. It does so through the means of the Trafficking In Persons (TIP) Report—a controversial but vastly influential lengthy annual assessment of the response to trafficking in 187 countries, ranking them across four tiers: Tier 1 being the most successful at countertrafficking efforts, followed by Tier 2, Tier 2 Watch List, and finally Tier 3.

Countries considered not to be making sufficient efforts to combat trafficking are classified within Tier 3 and are subject to sanctions on U.S. aid to their governments, which are theoretically restricted to activities that are unrelated to human trafficking and its root causes. The U.S. State Department is then required by law to work with them to develop a more effective countertrafficking strategy going forward.

This year’s report, released in June, saw 21 countries fall within Tier 3, including China, Belarus and South Sudan. For the third year in a row, Bangladesh was assigned Tier 2 Watch List status—a ranking explained in part by researchers as a repercussion of the sudden influx of over a million Rohingya refugees since 2016, and accompanied by 13 recommendations for improvement.

The State Department is clearly aware of the implications that early marriage can have on a girl’s safety.

In 18 years of research and assessment, there has never been any mention of child marriage in Bangladesh’s TIP profile. Yet the State Department is clearly aware of the implications that early marriage can have on a girl’s safety: In this year’s report, they referenced child marriage as a contributing factor to girls’ vulnerability to sexual exploitation and trafficking in both Syria and Iraq.

Human rights advocates say that if the State Department viewed child marriage in Bangladesh as a form of trafficking or an enabler of trafficking, then it’s possible that the country would have received different recommendations, or even a different grade. Were that the case, the incentives for the Bangladeshi government to end child marriage and develop comprehensive child protection legislation would be considerable. 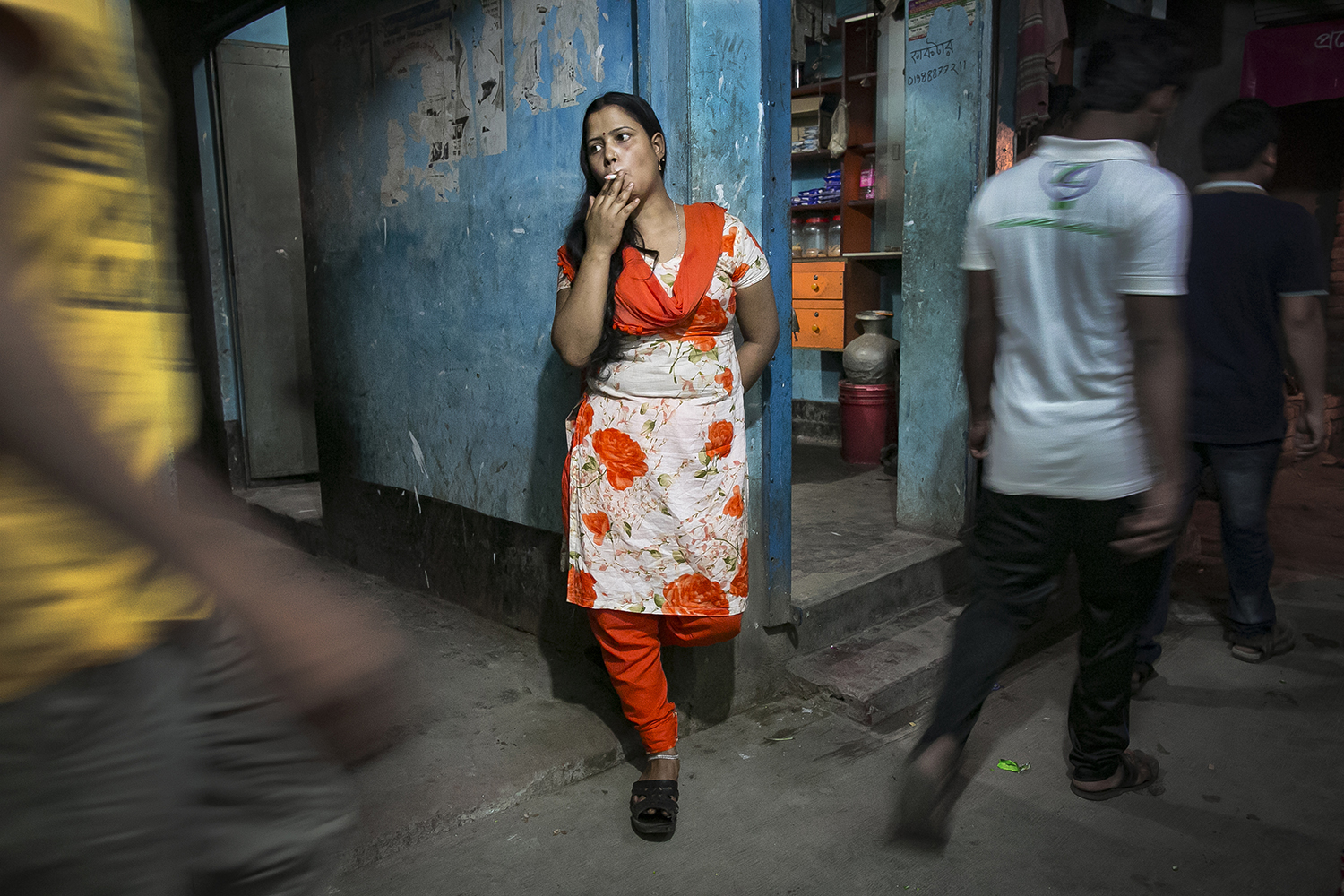 Sony waits for customers at the Tangail brothel on March 24, 2017. Allison Joyce for Foreign Policy

“The Bangladeshi government takes the TIP report very seriously,” said Liesbeth Zonneveld, the chief of Winrock International’s Counter Trafficking-In-Persons Project, adding that both Bangladesh’s secretary of home Affairs and foreign secretary have already shown a demonstrable commitment to implementing the State Department’s 2019 recommendations. Zonneveld doesn’t know why the United States refuses to consider child marriage as a form of trafficking and to include it in the TIP report accordingly. “The U.S. says there are 25 million global victims of human trafficking, whereas most of us would include forced marriage in that and say there are 40 million,” she said.

Funding for programs that address child marriage as a root cause of trafficking would also be easier to access, said Talinay Strehl, the program manager for the Dutch anti-trafficking nonprofit Free a Girl. “Our donors respect the information included in the TIP Report,” she said. “If we were able to show them that child marriage was referenced, it would probably be easier to get financial support for prevention projects that work with victims of child marriage.” Free a Girl does not currently run any anti-trafficking projects that target girls forced into early marriage, but Strehl acknowledges that they’re a high-risk demographic. “Right now, we just don’t have the resources,” she said.

Until the U.S. State Department acknowledges the role of child marriage in rates of trafficking in Bangladesh, and organizations on the ground are able to incorporate the victims of child marriage into their countertrafficking efforts, those working with trafficking survivors say girls growing up across Bangladesh will remain trapped at an alarming impasse: stay with your husband and endure sexual violence in the name of marriage, or run away and risk being sold into sexual slavery without hope of escape.

Corinne Redfern is Asia correspondent for the Fuller Project.