Defense Secretary Mark Esper is quiet, deferential—and on his way to becoming the Trump administration’s most influential player.

An inadvertent effect of the Trump administration’s personnel management has been to make the U.S. Military Academy at West Point’s class of 1986 among the most influential in history. Its graduates include the U.S. secretary of state (Mike Pompeo), a high-profile Washington insider and reputed “Trump whisperer” (Dave Urban, who now heads up a powerful lobbying firm), an ultraconservative Republican congressman (Mark Green, who was previously a part of the mission that captured Iraqi dictator Saddam Hussein), and a bevy of Pompeo’s best buddies—including Brian Bulatao, the undersecretary of state for management, and Thomas Ulrich Brechbuhl, the State Department’s counselor. As of this summer, it also includes President Donald Trump’s new secretary of defense: Gulf War veteran Mark Esper.

The members of this group of insiders are closely networked with one another, but the group nevertheless has its own internal hierarchy. Esper hasn’t tried to place himself at the top of this West Point network, or the network that comprises the broader Trump administration. There’s every reason to believe, however, that he’s steadily, if quietly, charting his way there.

Pompeo, who graduated first in the class, is closer to Trump than anyone in the administration. That may be why Esper, Pompeo’s former classmate, defers to him—an observation noted by a senior Defense Department civilian who’s watched the defense secretary in action. “I’ve seen this now half-a-dozen times,” the official noted. “Whenever Pompeo calls, Esper clears the room and closes the door. People have noticed. I don’t think that Pompeo runs Esper, but it’s a bad look.” The deference is unusual and, for some, disturbing. The sheer size of the Pentagon dwarfs that of the State Department, its budget dominates federal spending, and, more crucially, the secretary of defense is in the chain of command. Shouldn’t Pompeo defer to Esper? 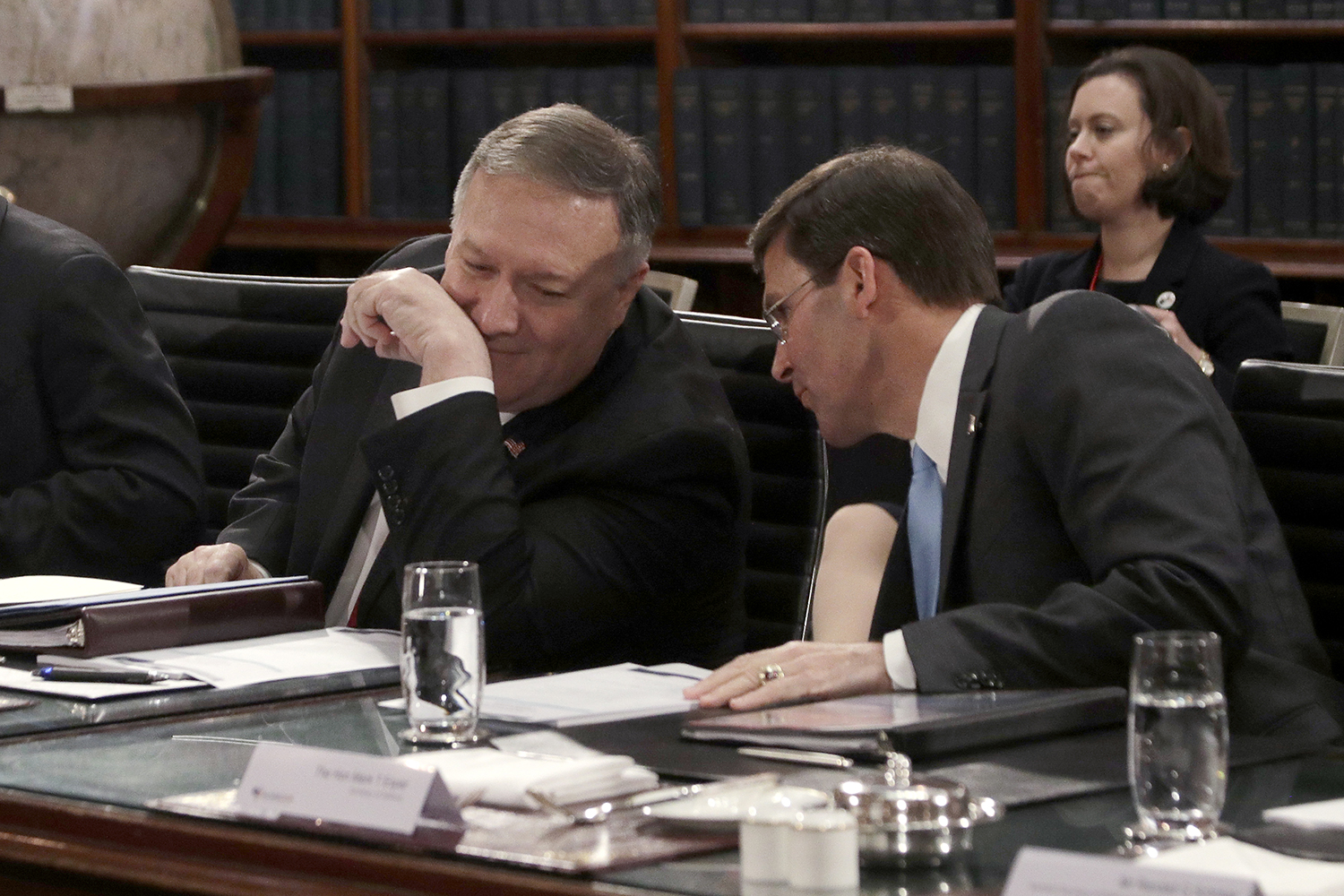 U.S. Secretary of State Mike Pompeo confers with Esper at the beginning of bilateral talks with Australian counterparts in Sydney on Aug. 4. Rick Rycroft/Getty Images

Not everyone thinks Esper’s deference is a problem. “Mark Esper is new to his job, while Secretary Pompeo isn’t,” said retired Army Lt. Gen. Thomas Spoehr, the director of the Center for National Defense at the Heritage Foundation. “So if you’re going to get your feet wet in this administration, it’s only natural you would listen to someone who’s close to the president. My sense is that that is what Mark Esper is doing. Besides, what’s wrong with having two cabinet officials, especially at the Pentagon and Foggy Bottom, who actually get along?” In fact, open feuding between the defense and state departments is legion: The personal animus between Secretary of Defense Caspar Weinberger and Secretary of State George Shultz nearly derailed Ronald Reagan’s foreign policy, while Defense Secretary Donald Rumsfeld drew swords with both Colin Powell and Condoleezza Rice during their respective stints as secretary of state in the George W. Bush administration. (“Donald Rumsfeld’s first priority isn’t the war in Iraq,” one of his aides told me in 2005, “it’s his war against Condoleezza Rice.”)

But Esper’s deference to Pompeo (the latter dubbed “Miss America” by some Pentagon insiders, because “he’s always smiling and waving,” as the senior civilian notes) isn’t the only major criticism of the new defense secretary. He also has a reputation as an arms industry insider because of his seven years as a lobbyist for Raytheon, a major Pentagon contractor. Esper’s confirmation hearing sparked an infamous exchange with Sen. Elizabeth Warren, who demanded the nominee recuse himself from all matters involving his former employer during his time in government service—and for four years after leaving it. Esper refused, while saying he would follow the ethics rules he signed on to before becoming army secretary.

When Warren pressed him, Esper commented that he thought the exchange was “a good debate.” Warren cut him off: “I’m not trying to have a debate,” she snapped. For the analysts Mandy Smithberger and William D. Hartung, the Esper appointment was more of the same: “During the Trump administration,” they wrote during the confirmation process, “the post of secretary of defense has been passed from one former defense industry figure to another, as if it were literally reserved only for key officials from major weapons makers.” Esper did ultimately recuse himself from the Pentagon’s cloud computing contract because his son is employed by IBM, which was one of the initial bidders. “It was a good decision,” Smithberger told me. “It shows that the secretary knows the rules.”

Esper may well be the most experienced Pentagon insider to serve as defense secretary since President Bill Clinton appointed William Perry to the job back in 1994.

Indeed, Esper may well be the most experienced Pentagon insider to serve as defense secretary since President Bill Clinton appointed William Perry to the job back in 1994. In addition to his midcareer seven-year stint at Raytheon, Esper served as a young officer during the 101st Airborne Division’s famous “left hook” in the first Gulf War (and was awarded a Bronze Star), earned advanced degrees from Harvard and George Washington University, served as chief of staff at the conservative Heritage Foundation, spent six years on Capitol Hill (where he worked on the staffs of Republicans Bill Frist and Chuck Hagel), was a senior official at the Aerospace Industries Association, and then, from late 2017 to this past July, was the Trump administration’s secretary of the army.

If there’s anything surprising about Esper’s resume, it’s that he’s often been overlooked by political leaders outside the military. He was Trump’s third choice as army secretary, after billionaire businessman Vincent Viola (West Point Class of 1977) and the uberhawk Mark Green, then waited in the wings to hear his name called. Esper’s appointment as defense secretary, however, confirmed the tenacity of the ring-knockers, who included the Esper cheerleader Dave Urban (who helped Trump win Pennsylvania) and the Heritage Foundation strategist and West Point graduate James Jay Carafano, who once described Esper as “an all-American public servant.” Despite this, Esper wasn’t the first choice of Republican insiders, who preferred someone with more conservative credentials. At one point South Carolina’s Sen. Lindsey Graham looked past Esper to Marine Gen. Joseph Dunford, the Joint Chiefs of Staff chairman under both Trump and his predecessor Barack Obama, as a potential successor to outgoing acting Defense Secretary Patrick Shanahan. “Esper was viewed as a Hagel acolyte, and that doesn’t sit too well with some more conservative Republicans,” one retired Army senior officer explained. “But Urban and Carafano kept pushing and pushing.”

Esper’s experience was evident in his response to Trump’s controversial October decision to pull U.S. troops out of northern Syria. “Esper was more than a good soldier on this one,” a senior Pentagon civilian argued. “He was tireless. He spent that weekend on the telephone, talking to his counterparts, worked with the [Pentagon’s] anti-ISIS task force until all hours and then appeared on news programs to defend the president. It was an impressive performance.” The official contrasted Esper’s approach with that of his acting predecessor, Shanahan, whose permanent defense secretary nomination was withdrawn after reports of a “deeply personal family situation” surfaced. “Shanahan looked lost,” this official noted, “like he couldn’t find where he was going. He didn’t know the Pentagon, and I mean that literally. And he was always trailed by a group of aides, hanging on his every word. That’s not Esper.” 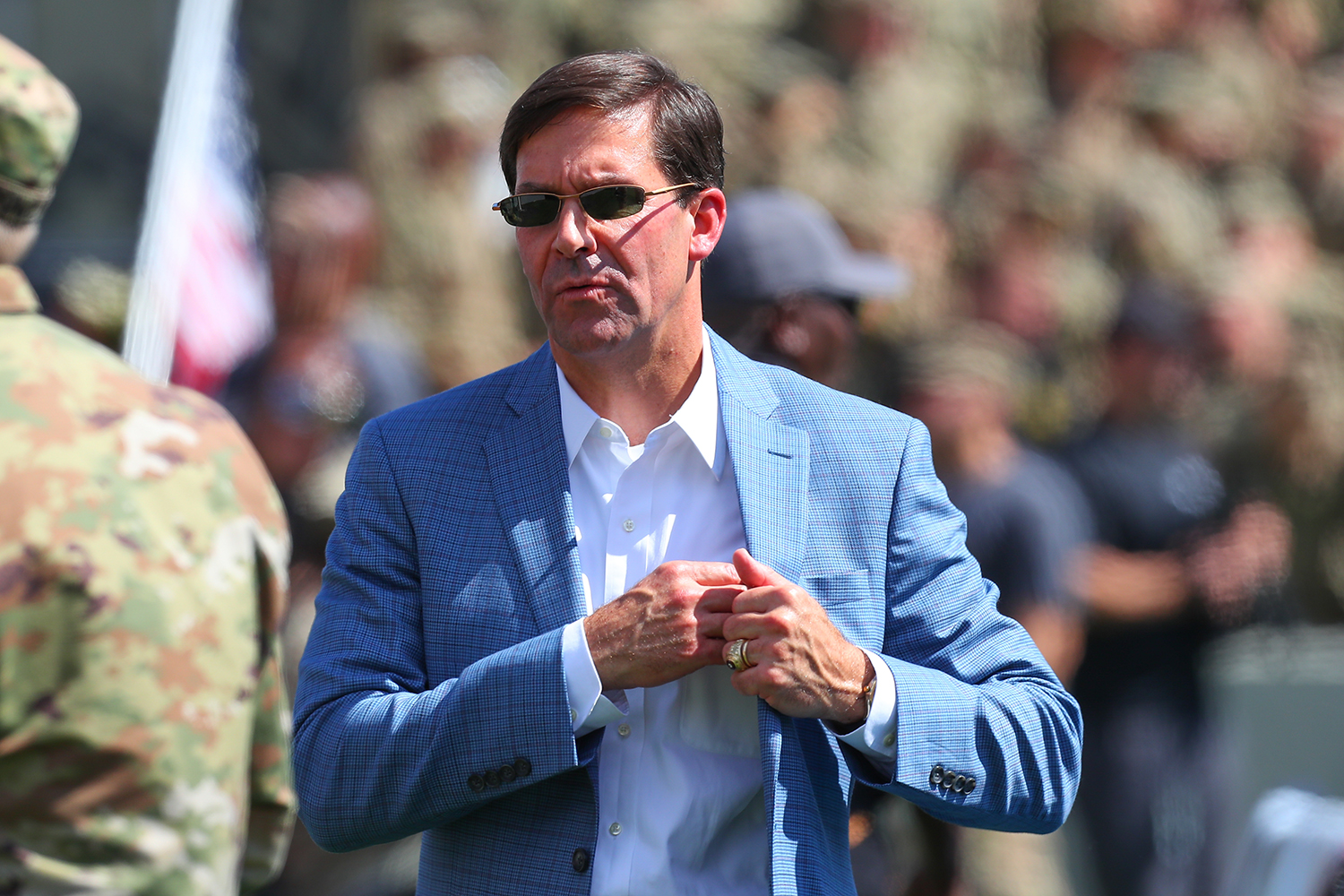 The one rap against Esper that might stick is that he’s “too Army.” Esper’s West Point nickname was “Troop” (“Because I was really, really committed to military service and being in infantry,” as he told one reporter); he has a portrait of Gen. George Marshall, a non-West Pointer, behind his Pentagon desk (both Esper and Marshall grew up in Uniontown, Pennsylvania); and he has long been close to Gen. Mark Milley, who now serves as chairman of the Joint Chiefs of Staff.

The one rap against Esper that might stick is that he’s “too Army”—his West Point nickname was “Troop.”

Their relationship solidified during Esper’s tenure as army secretary, when the two teamed up in a much ballyhooed “night court” initiative aimed at rooting out duplication in army programs. The two were joined by then-Army Undersecretary Ryan McCarthy and then-Army Vice Chief of Staff James McConville. “This was a very disciplined process,” retired Marine Col. Mark Cancian, a senior advisor at the Center for Strategic and International Studies, said, “and would go on for hours each day. You had to come in and defend your program, and if it didn’t fit the army’s modernization priorities then its funding was reprogrammed. These guys were pretty tough.” The Esper-Milley initiative reprogrammed nearly $31 billion in Army funding over a period of five years, according to one estimate. But the Esper-Milley partnership is also crucial for two other reasons: Milley is closer to Trump than Esper, and Milley and Esper both see eye to eye on China and identify it as “the primary challenge” to the United States over the next several decades.

Esper’s alliance with Milley is crucial, particularly now with Mike Pompeo under a firestorm of criticism from State Department officers and diplomats who believe their boss is primarily interested in securing his own political future. Pompeo is faulted for failing to defend Ukraine Ambassador Marie Yovanovitch (who was forced from her position) and for refusing to intervene to end presidential lawyer Rudy Giuliani’s shadowy Ukraine initiative.

Esper, on the other hand, has stayed out of the line of fire, building Pentagon alliances and gaining the trust of uniformed defenders, like Milley, who can protect him. The result is that he’s gained valuable allies among senior military officers and Pentagon careerists. Then too, there’s Esper’s West Point association, which is a card that plays well among many in the uniformed services, but not at all at Foggy Bottom, as Pompeo has discovered.

“I know it’s a cliche, but this is a hare and tortoise kind of thing,” a Pentagon civilian who has worked closely with Esper over the last weeks said. “Mike Pompeo is flashy, savvy, politically ambitious, and a Trump darling. He’s No. 1 in his class. Esper isn’t any of those things. But he’s steady, tenacious, well-liked in this building, and he works under-the-radar. Don’t bet against him.”

Mark Perry is a senior analyst at the Quincy Institute for Responsible Statecraft and the author of 10 books on foreign policy and military history.
Tags: Department of Defense, Donald Trump, Politics, United States