Tehran Paints Over Its Anti-American Murals

The city’s old public art showed a United States to be feared. The new ones depict a country that is weaker, more laughable, and riddled with its own problems.

On Nov. 4, in commemoration of the 40th anniversary of the takeover of the U.S. Embassy in Tehran, the Iranian regime unveiled a set of new murals on the walls around the old embassy’s compound, locally known as the Den of Espionage. The designs of the new paintings were proposed by student volunteer members of the Iran’s Basij paramilitary force in an effort to capture the latest aspects of tensions between Iran and the United States in the wake of the U.S. withdrawal from the 2015 nuclear deal and the reimposition of sanctions under U.S. President Donald Trump.

The fresh artwork was literally plastered over another set of murals, which had been painted in the aftermath of the Iranian revolution and had closely reflected the contentious politics of that era. In articles in the local Iranian press, the manager of the Den of Espionage museum, Bahram Amini, suggested that the themes of the old murals were dated and they had to be changed.

The similarities and differences between today’s murals and yesterday’s are telling. The original artwork was cast in more muted tones as compared to the new ones, which are done in bolder reds, whites, and blues. The new murals also more starkly invoke comic strips as a way of mocking the U.S. government, trivializing U.S. power instead of making it fearful as in the old images.

Although there are some new themes—such as the war in Syria and the recent downing of the United States’ RQ-4A Global Hawk drone over the Persian Gulf—that are meant to capture contemporary U.S.-Iranian tensions, the similarities between the old and the new paintings remain striking. For example, one of the recently unveiled murals shows a gun festooned with stars and stripes, and it is notably similar to an older mural of the same look. Yet the barrel of the gun in the newer mural is bent, and the weapon appears to be quivering, reflecting a more mocking tone. 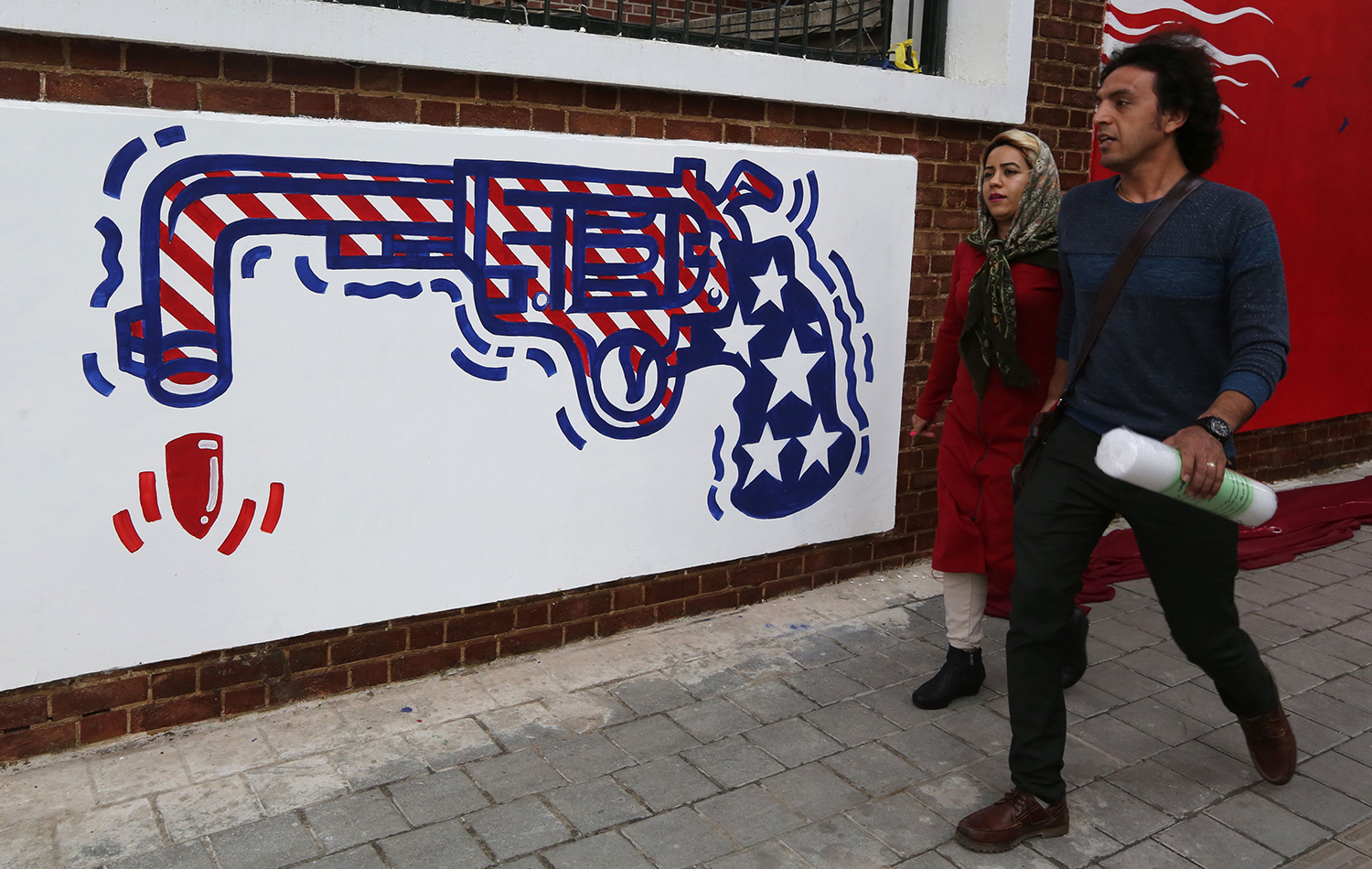 A new mural on the walls of the former U.S. Embassy in Tehran on Nov. 2. 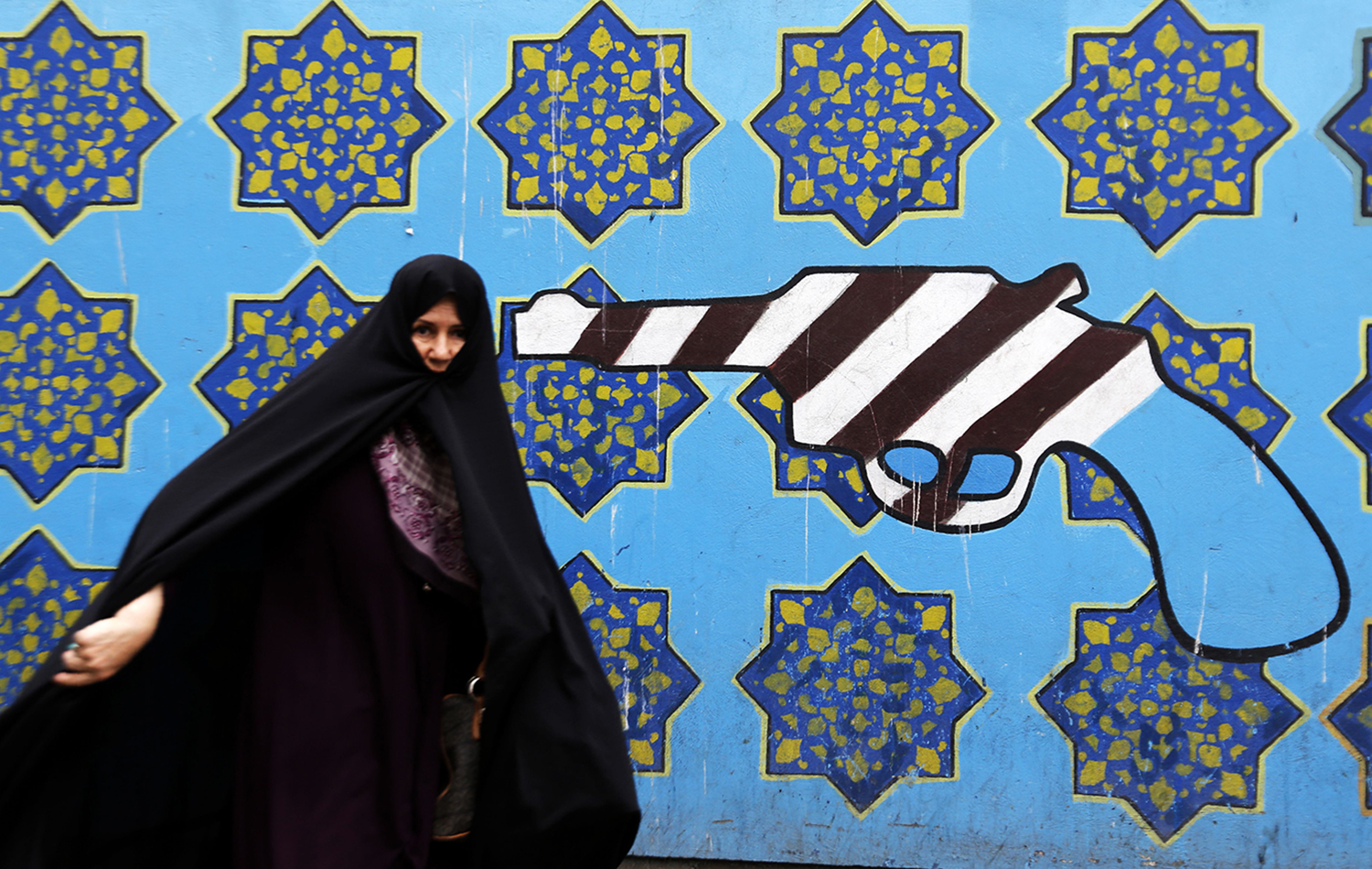 A mural on the walls in Tehran on May 8, 2018. Atta Kenare/AFP via Getty Images

The Statue of Liberty also remains a feature, either with a severed arm in the new version, where her torch to light the way for others is gone, or as a skull instead of a face in the old. 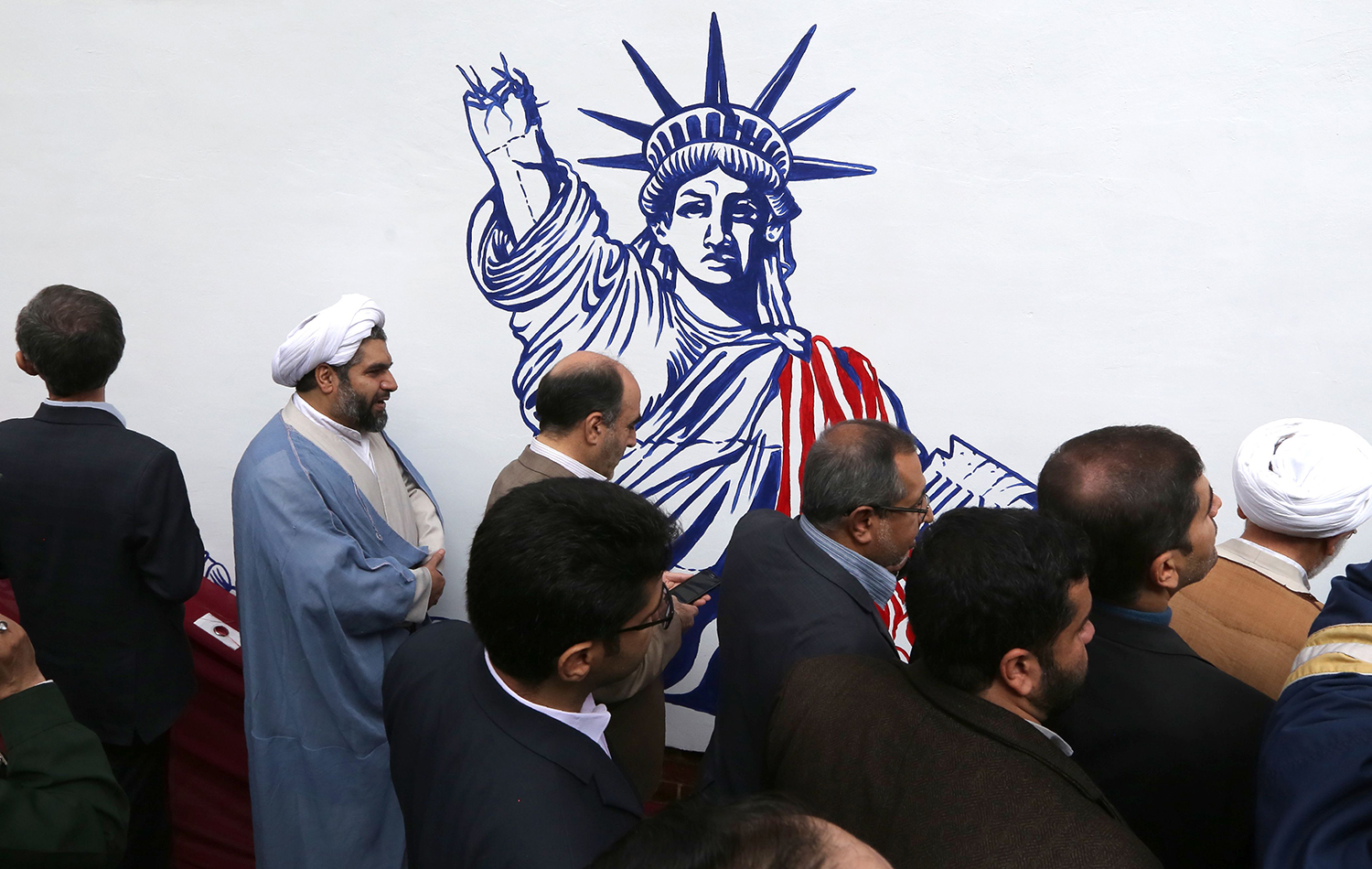 Iranians take part in an inaugural ceremony unveiling the new murals on the walls of the former U.S. Embassy in Tehran on Nov. 2. Atta Kenare/AFP via Getty Images 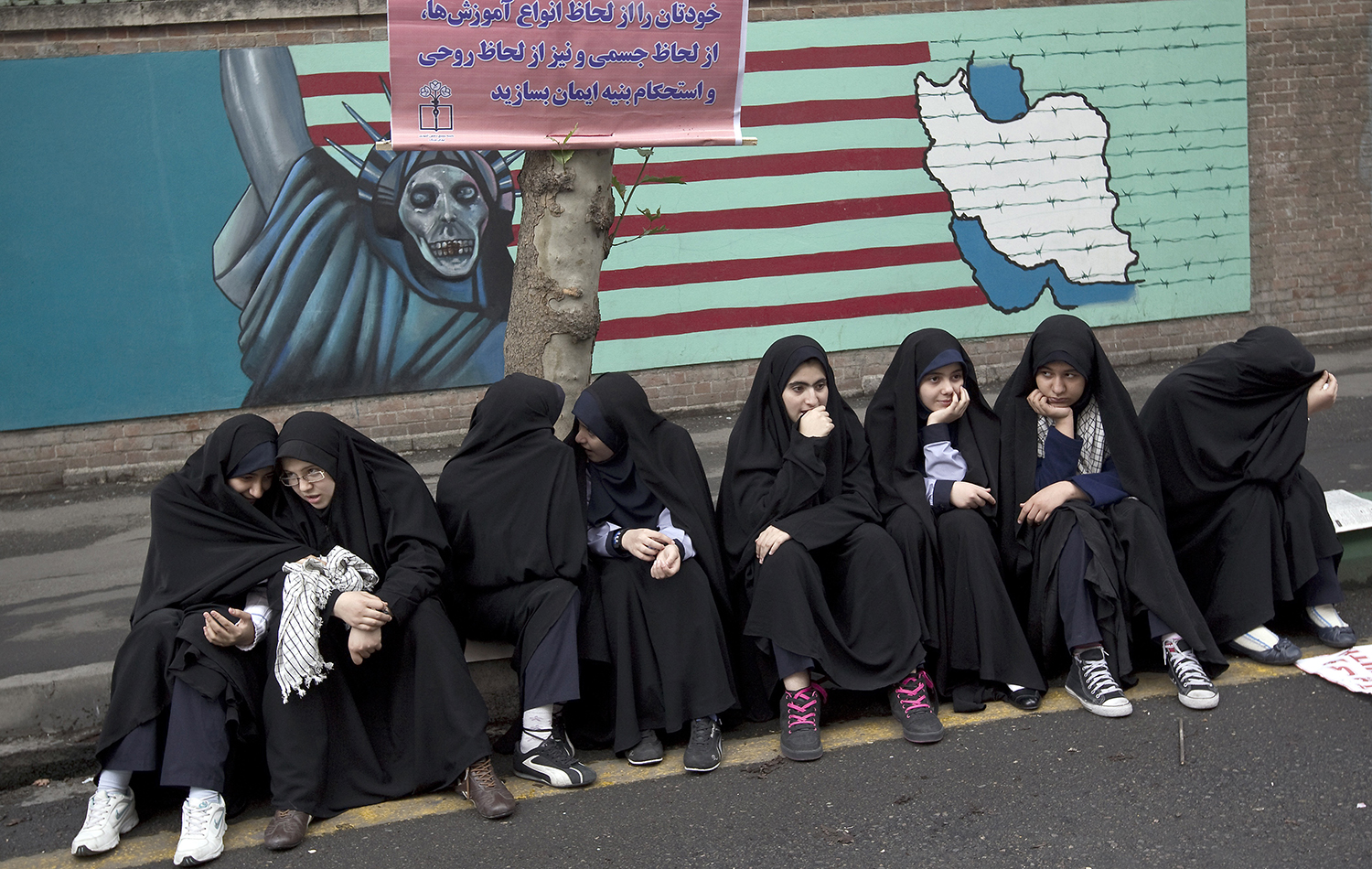 Iranian schoolgirls sit in front of mural in Tehran on Nov. 4, 2010. Behrouz Mehri/AFP via Getty Images

Barbed wire and American pop culture are themes in both the new murals and old as well. Barbed wire was prevalent in the Iran-Iraq War, and its presence in the original murals would have reminded older viewers of those battles. These days, though, one wonders if it recalls more the U.S. prison at Guantánamo Bay, a touchstone of anti-Americanism in the younger generation.

In terms of U.S. pop culture, the latest images include a $1 stamp featuring barbed wire replacing french fries in a McDonald’s container, next to another stamp depicting Mickey Mouse holding a smoking gun, and a third with Uncle Sam’s stars-and-stripes hat depicted as a magician’s hat with missiles peeking out of it—references that seem to be both universal and frozen in time. 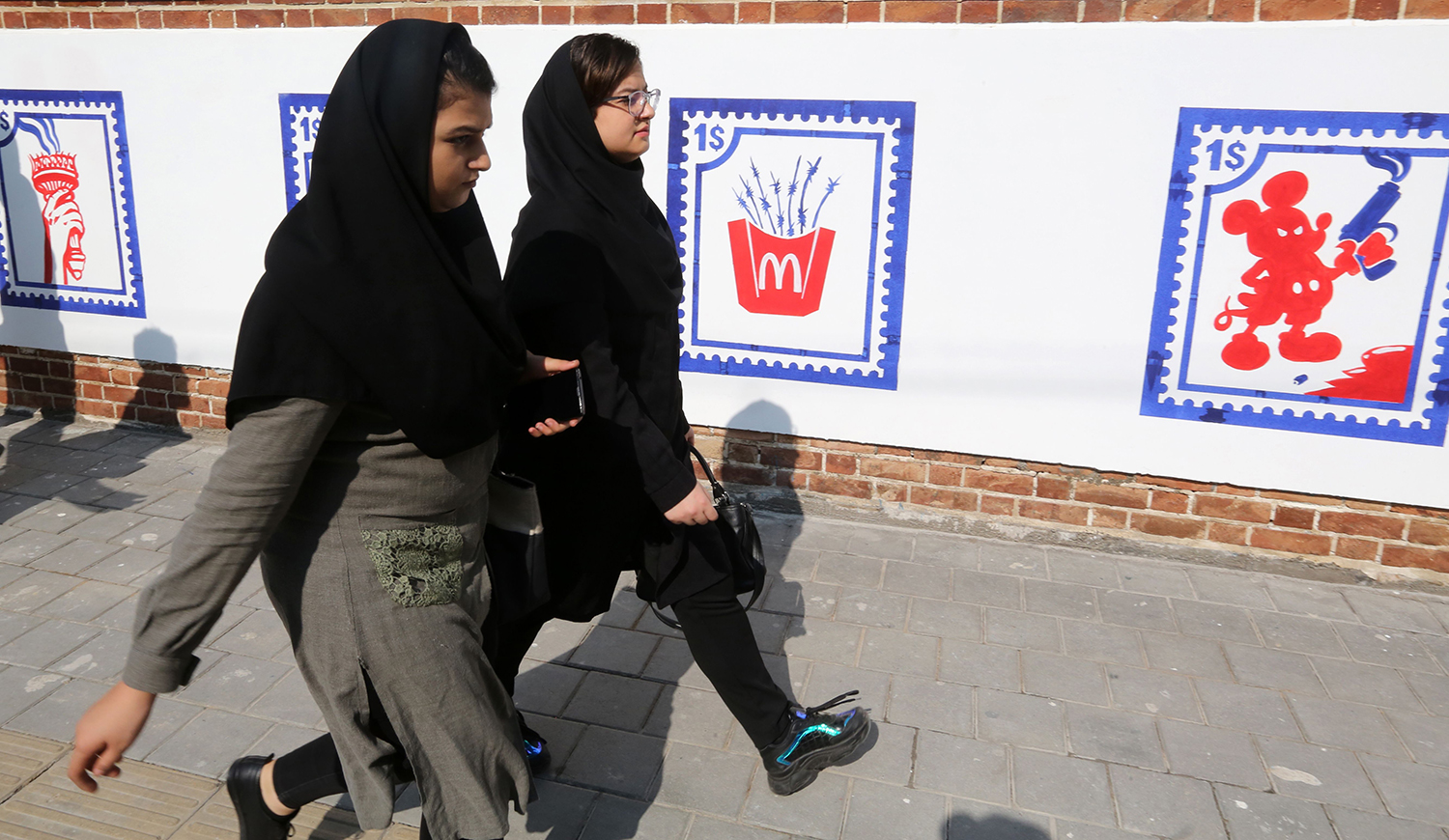 Skulls are a recurring theme, too, rendered in one new mural as floating in a blood-red sea around the Eye of Providence, the symbol used on the back of the U.S. dollar bill, and in another as taking place of the stars on an American flag, with snipers hiding among the stripes, alluding to the United States’ lengthy wars in the Muslim world. This particular mural recalls an older one on the streets of Tehran that combined skulls as stars in the flag with missiles making up the stripes. 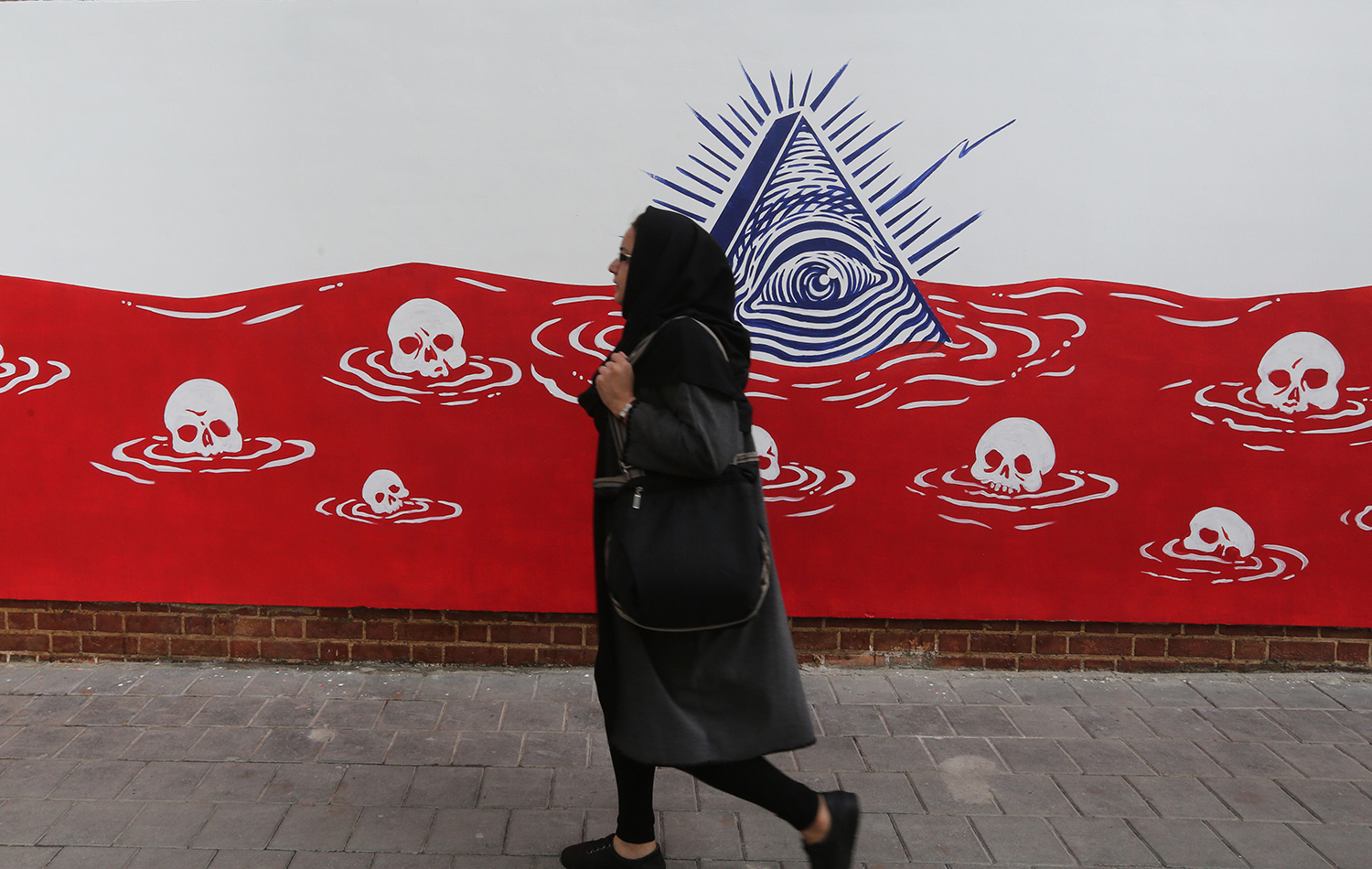 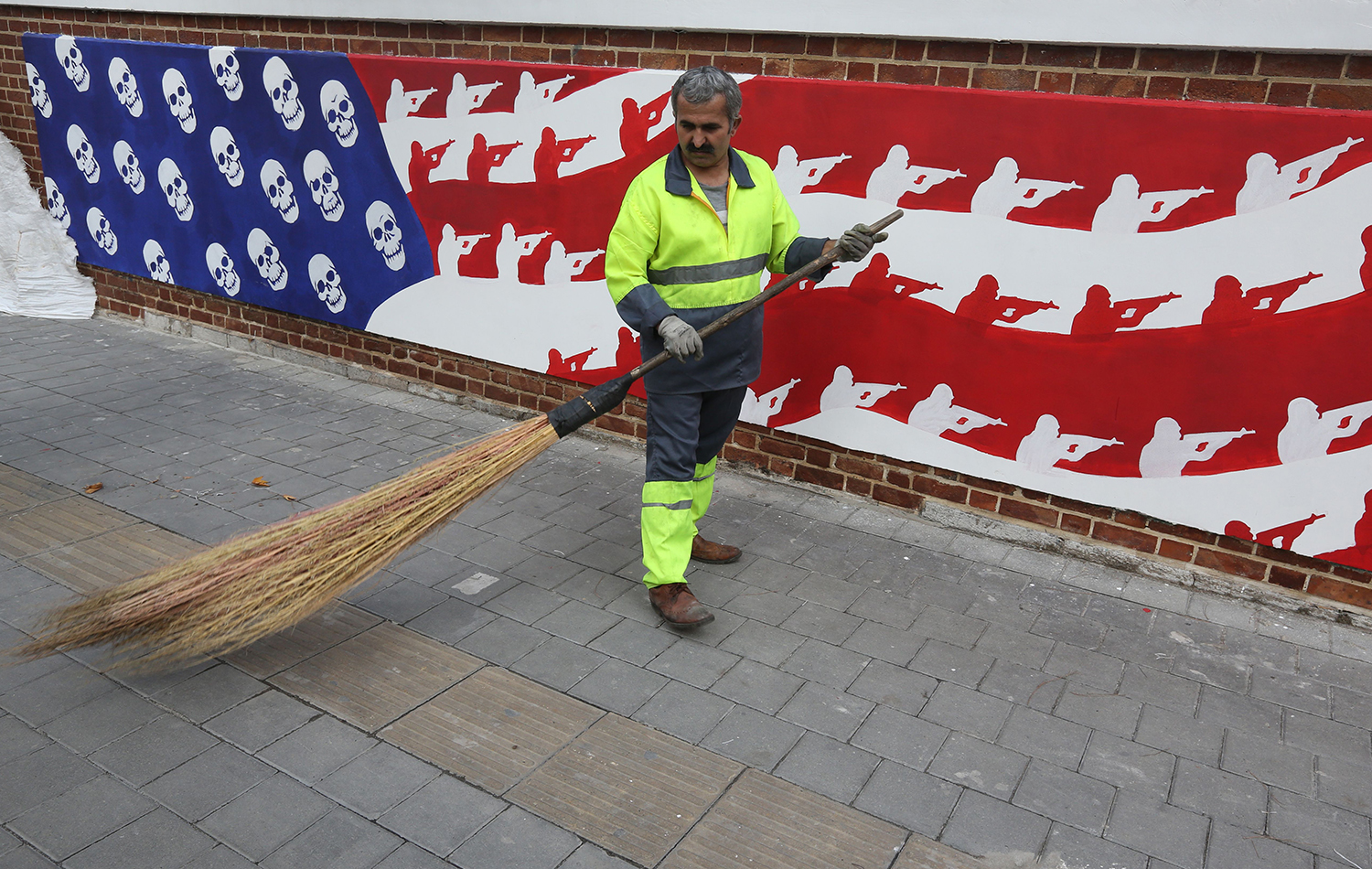 Another mural featuring skulls in Tehran on Nov. 2. Atta Kenare/AFP via Getty Images 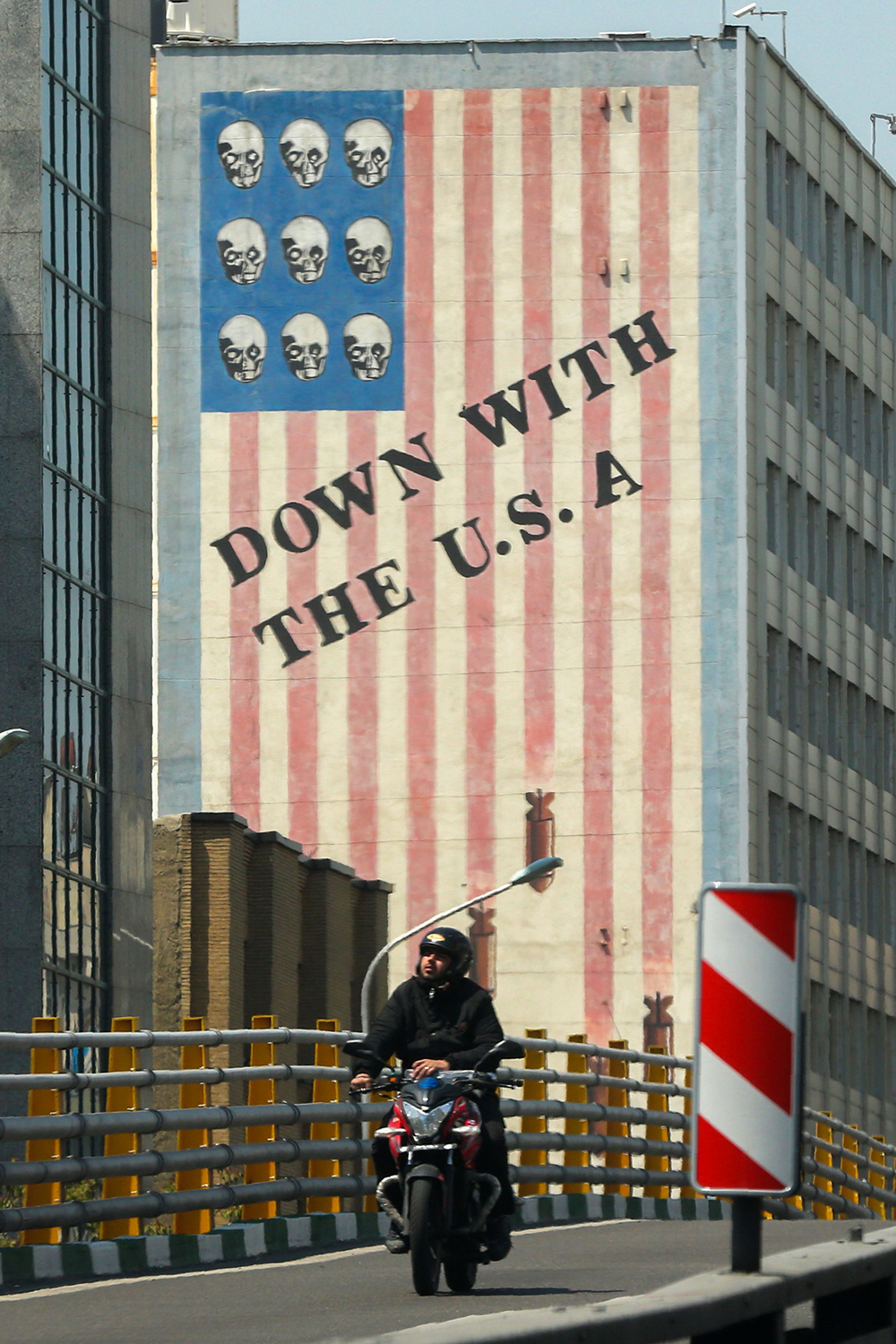 A large anti-American mural covers the wall of a building in the center of Tehran on April 23. ATTA KENARE/AFP via Getty Images

As striking as the recurring themes may be there, there is also imagery that has been left out of the new versions. One of the old murals that has been covered up showed a hand draped in the American flag coming out of a satellite dish. It is holding a burning match and setting fire to the flowers of the revolution. This was meant to depict the destructive intrusions of U.S. propaganda through satellite outlets such as Voice of America. It is surprising that there was no reference or indirect allusion to the contemporary use of social media or U.S. news outlets and their perceived role in propaganda against Iran.

Images of Ayatollah Ruhollah Khomeini returning from Paris to start the Islamic Revolution used to figure prominently in the murals, but now they are gone. In fact, he’s nowhere to be seen, perhaps because his successor has been in power for many years now, and the country considers itself to have moved out of the revolutionary phase. Indeed, one painting shows an Iranian and an American politician sitting across a table from each other in the White House. While both politicians are depicted as wearing suits from the waist up, under the table the American is dressed in military fatigues and boots, signaling that Iran is not the overmilitarized power and that it can never trust the United States’ intentions. 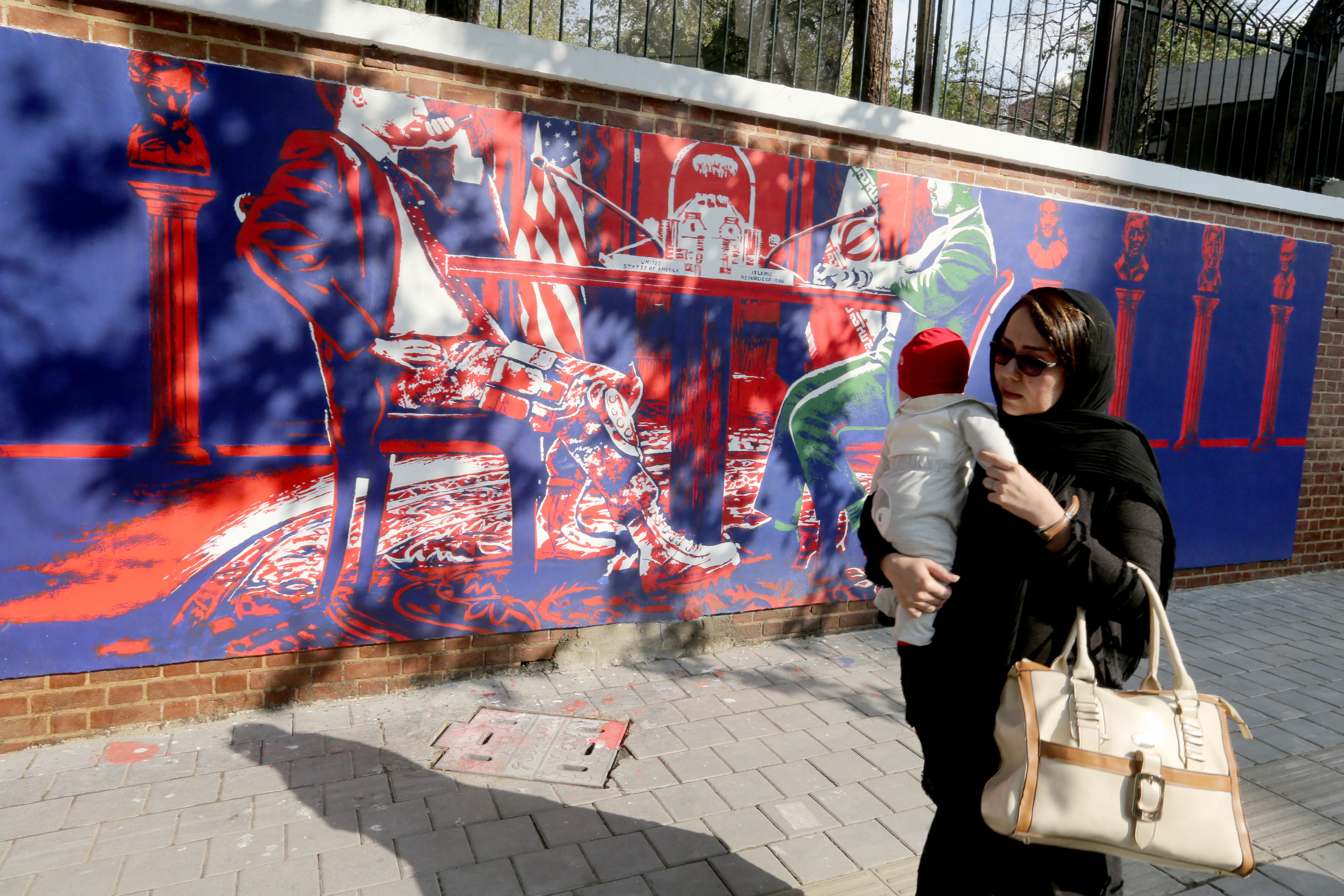 A new mural in Tehran on Nov. 2. ATTA KENARE/AFP via Getty Images

Likewise, images of fighters and martyrs of the Iran-Iraq War are gone to allow for imagery invoking wars in contemporary Middle East theaters. For example, one mural depicts the recent downing of a U.S. drone over the Persian Gulf, which was seen in Iran as an important assertion of sovereignty and military prowess. 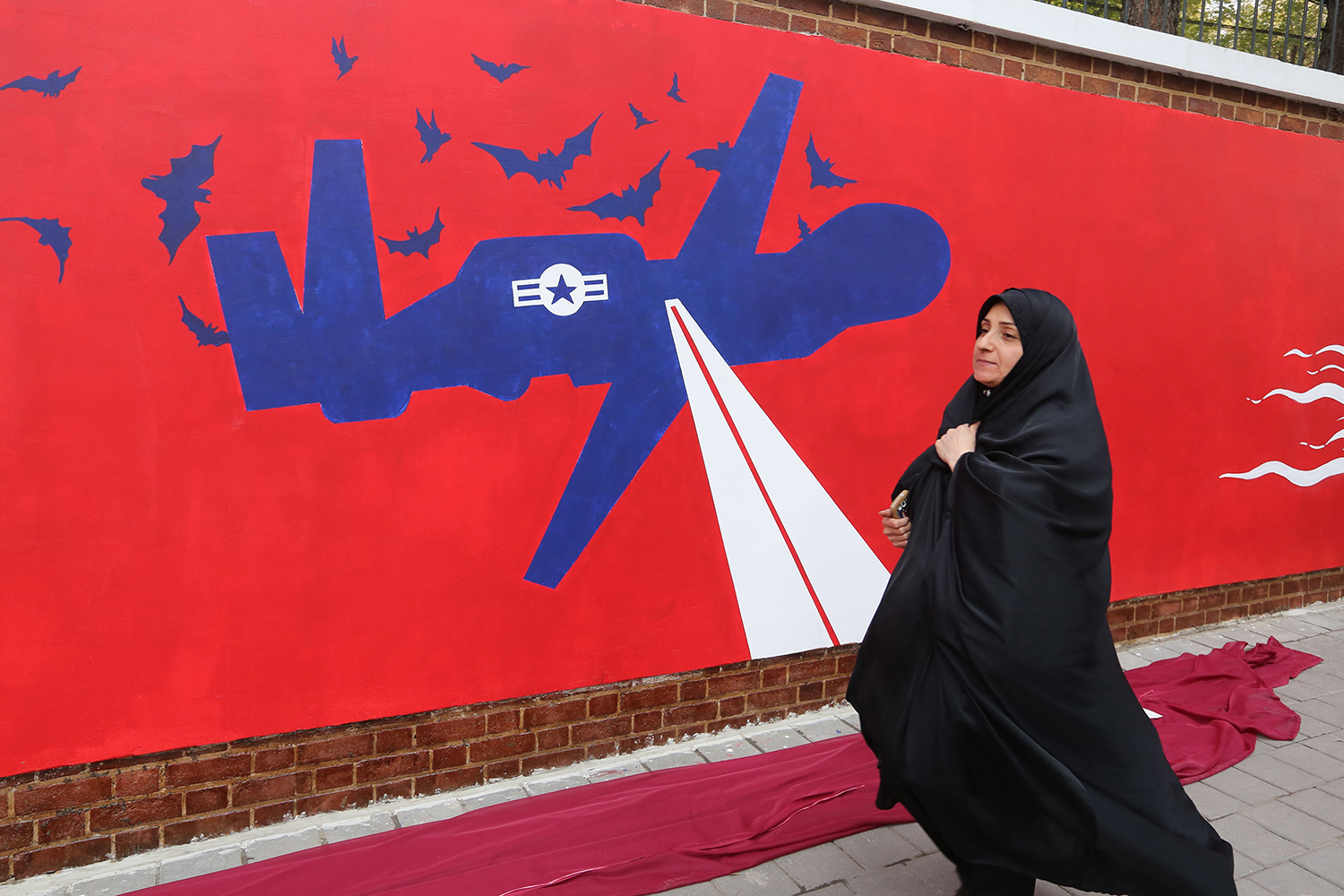 A new mural in Tehran on Nov. 2. ATTA KENARE/AFP via Getty Images

Another takes on the war against the Islamic State. It features an Islamic State fighter with an overturned Israeli tank to his right and some destroyed antiquities from Palmyra, Syria, and from northern Iraq next to a downed U.S. helicopter to his left. What is of interest here is that Iraq—no longer a great enemy—is included in the iconography, signaling Iran’s influence in the neighboring country.

The new mural with the starkest imagery may be one that hints at the United States’ domestic problems. It shows the Great Seal of the United States, but the constellation of stars above the eagle’s head has been replaced by a red Star of David, and the eagle is holding bullets and drug syringes in its talons instead of an olive branch and 13 arrows. The red stripes of the American flag on the chest of the eagle are dripping blood, and there are more bullets and guns scattered to the left of the seal and more syringes and drugs to the right, in direct reference to gun violence and the opioid crisis in the United States. The image reminds Iranians that the United States, far from an all-powerful enemy, is riddled with its own problems and moral corruption. 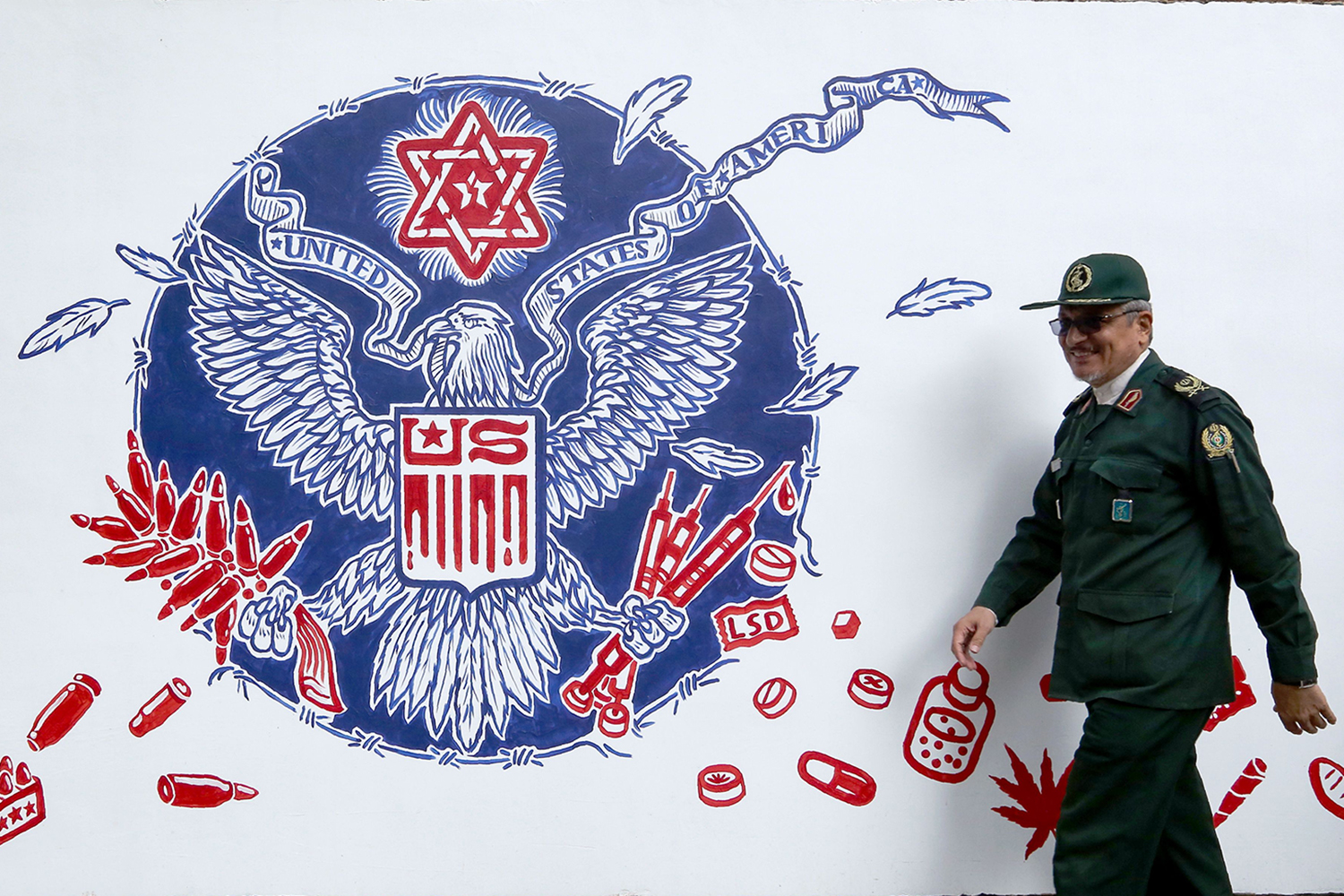 A member of Iran’s Islamic Revolutionary Guard Corps walks past a new mural in Tehran on Nov. 2. ATTA KENARE/AFP via Getty Images

In the murals around the old U.S. Embassy, Khomeini and other references to the revolution may be giving way to more contemporary concerns, but his pledge that “We will make America face a severe defeat” was, and continues to be, emblazoned across the embassy’s high brick wall. After all these years, it still seems to aptly convey the main message the Iranian regime wants to communicate. [redendbox] 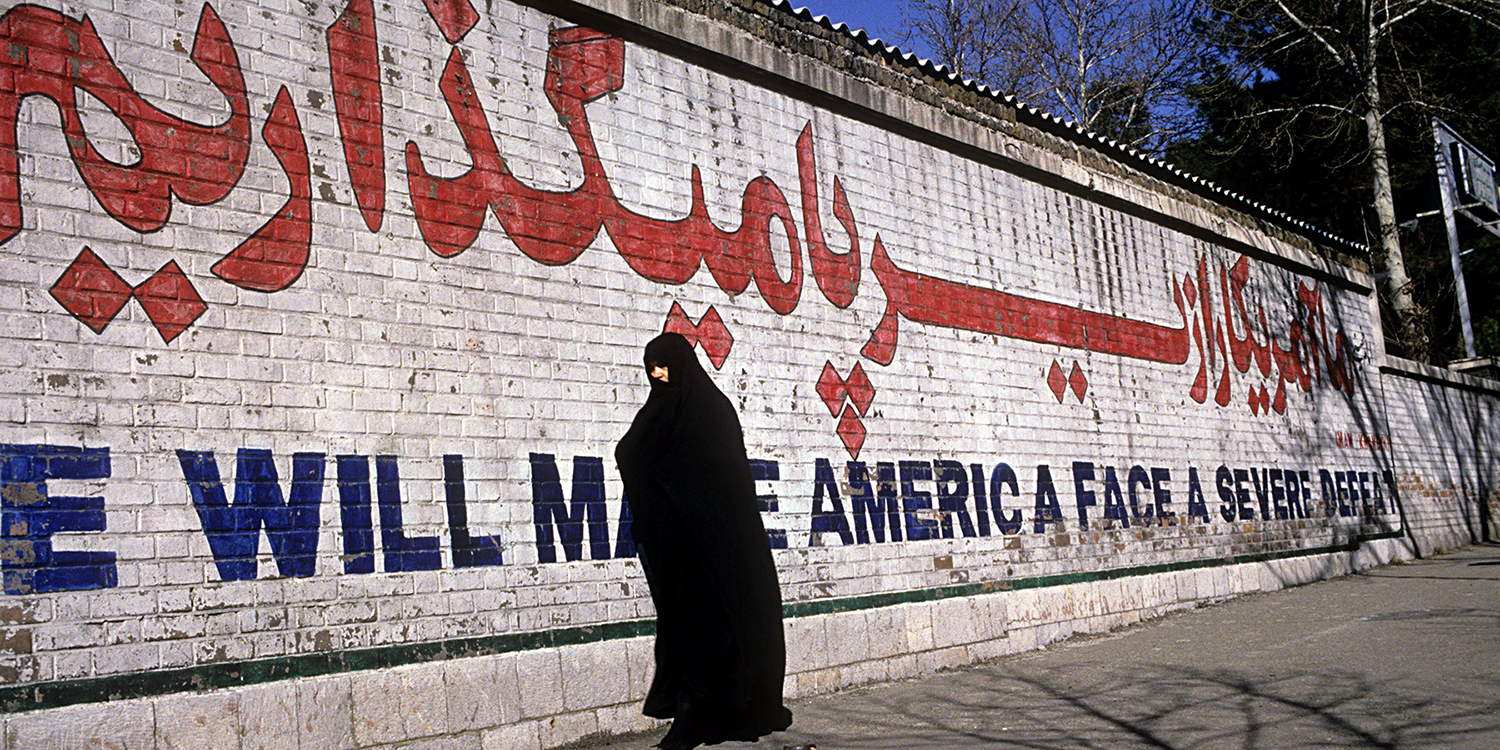 A woman passes a mural featuring a quote by Ayatollah Ruhollah Khomeini, “We will make America face a severe defeat,” in Tehran on April 11, 1996. Kaveh Kazemi/Getty Images

Fotini Christia is a professor of political science at MIT.