Despite mounting economic woes, the prime minister is scoring points by ticking off items on his pro-Hindu social agenda.

Another Victory for Modi’s Hindu Agenda

Another Victory for Modi’s Hindu Agenda

India’s Supreme Court made a historic ruling on Saturday as it gave Hindus control over a holy site long contested by Muslims. The top court’s judgment represented a victory for Prime Minister Narendra Modi and his Bharatiya Janata Party (BJP), which campaigned this year on a promise that it would build a Hindu temple at the disputed area in Ayodhya, Uttar Pradesh, where a 16th-century mosque once stood.

Complex history. The Ayodhya case is intertwined with religion, violence, and modern Indian politics. Hindus claim that the mosque, erected by the Mughal emperor Babur, occupied the birthplace of the Hindu deity Rama. Those claims date back to the mid-19th century, but the real showdown began in 1949, after India’s independence. Hindus broke into the Muslim site and placed an idol of Rama there, leading to a legal case and the compound gates being locked.

In 1986, under then-Prime Minister Rajiv Gandhi, the gates were reopened for Hindus to worship there, giving strength to the movement to replace the mosque with a temple. The tipping point came in 1992, when a Hindu nationalist mob incited by BJP leader L.K. Advani demolished the mosque. That led to Hindu-Muslim violence across the country and the deaths of 2,000 people—most of whom were Muslims. The question of what to do with the vacant lot has dragged on for 27 years—until now.

The ruling. As the Supreme Court prepared to issue its verdict last week, large parts of India went into lockdown. TV channels were warned to exercise caution in their reporting. Thousands of troops were deployed in Uttar Pradesh, and the internet was shut down in certain areas. But the ruling itself was not a surprise: The court placed the three acres of disputed land in a government-run trust, which allows Hindus to build the temple they have long desired. Muslims, on the other hand, were given five acres somewhere else in Ayodhya to build a mosque.

What happens next? While Hindus celebrated the ruling, not all parties were pleased. “This is a victory of faith over facts,” said Asaduddin Owaisi, a Muslim member of Parliament. And the facts, as Owaisi points out, are that those who destroyed the mosque have yet to face justice. Even though the court’s ruling noted that what had happened in 1992 was illegal, it went ahead and gave Hindus the green light to build their temple.

Security forces have maintained the peace, but there is still a possibility of violence—especially if Hindus engage in overt triumphalism. Either way, Modi and his BJP will be keen to highlight that they’ve accomplished another campaign promise, following the decision in August to curtail Kashmir’s autonomy and the move to create a citizens’ register in the state of Assam. If nothing else, those victories will distract Modi’s base from the increasingly worrying signs of a slowing economy—at least for now.

Sri Lanka’s October surprise. Ahead of the presidential election this Saturday, outgoing Sri Lankan President Maithripala Sirisena pardoned a death row convict who murdered a Swedish teenage girl in 2005. The pardon of the man, who is from a wealthy family, set off a public outcry as the presidential hopefuls are making their last bids for support. One of the leading contenders, cabinet member Sajith Premadasa, has positioned himself as an anti-China, pro-reform moderate in the hope of winning the youth vote. His main opponent, Gotabaya Rajapaksa, has played to his reputation as the former defense minister to win over those concerned with law and order. 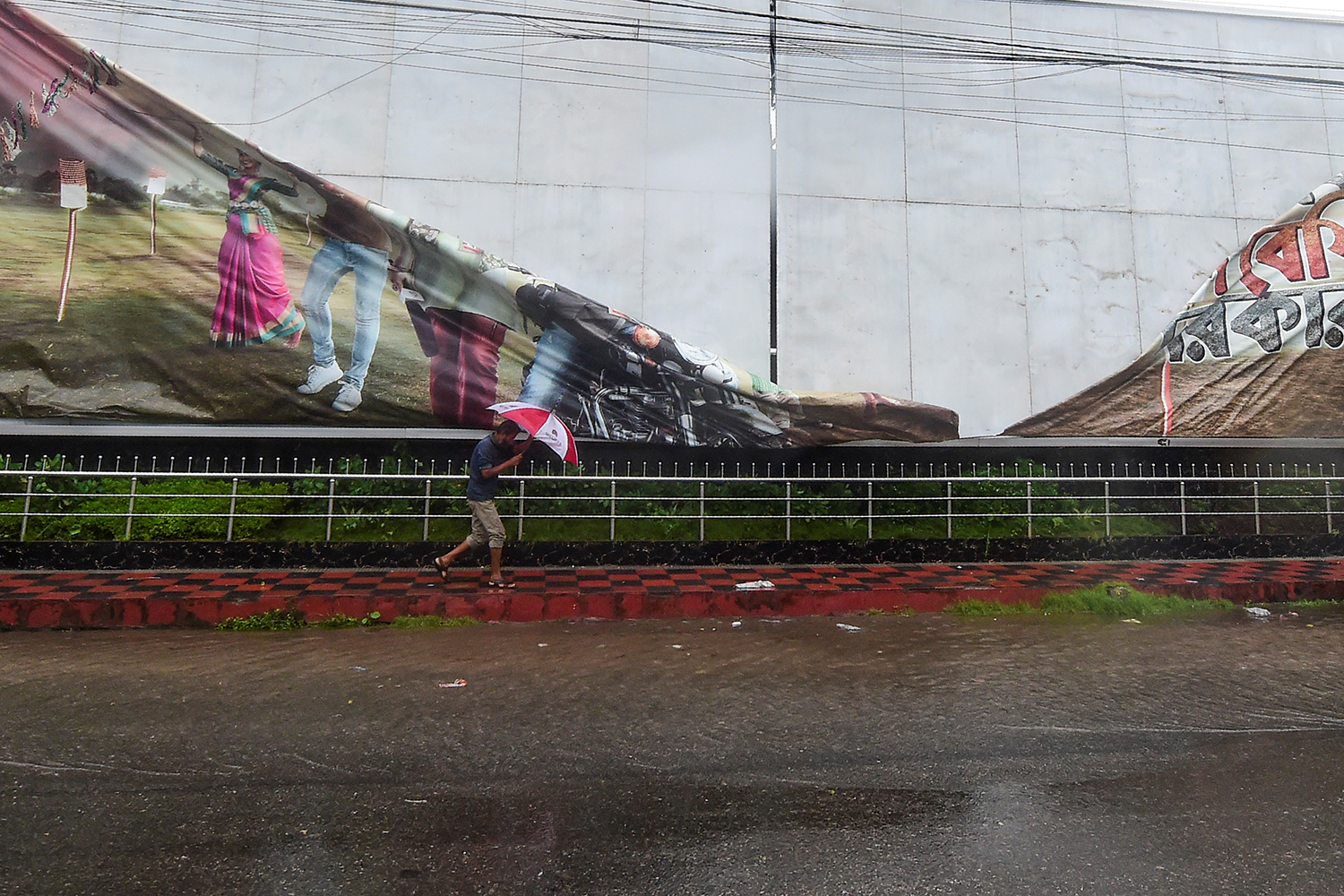 Cyclone Bulbul. Over the weekend, a massive cyclone hit Bangladesh and then India, killing at least 24 people and displacing millions. Both countries have seen major flooding, with around 30,000 homes damaged in Bangladesh. Ahead of Cyclone Bulbul, Bangladesh ordered its largest-ever evacuations, with around 2.1 million people moved to shelters. That’s part of the reason why death tolls from such disasters have declined, even as cyclones have become more frequent and intense.

U.S. troops remain in Afghanistan. U.S. President Donald Trump announced the pullout of U.S. troops from Syria, but it looks like he’ll keep the 14,000 stationed in Afghanistan there for several more years. In a Nov. 10 interview, U.S. Army Gen. Mark Milley, the chairman of the Joint Chiefs of Staff, said the U.S. mission in Afghanistan is still not complete. Hopes that it ever will be seem dim, with the Taliban peace talks at a standstill and results of the country’s September presidential election delayed.

No country for critics. The Modi government has stripped the prominent writer Aatish Taseer of his overseas citizenship status—a designation that granted him some rights in India, though not the right to vote—after he criticized the prime minister as India’s “divider-in-chief.” The move, Taseer believes, is meant to send “a warning message to other journalists.” Taseer joins millions of others who have lost their citizenship status under Modi, including potentially 2 million people in the Muslim-majority state of Assam.

Hundreds of Sikhs from India made a pilgrimage to Pakistan visa-free on Saturday as part of a historic deal between the two countries. The pilgrims visited the shrine of Guru Nanak, Sikhism’s founder, in the town of Kartarpur. Our question:

What is the estimated global population of Sikhs?

The business of bribes. This week, Trace International released its annual bribery risk matrix, which measures the likelihood that a business will encounter bribe demands from 200 different governments. Two South Asian countries—Bhutan and India—cracked the top half of the list (less likely), with Pakistan, Afghanistan, and Bangladesh nearest to the bottom (more likely). The World Bank similarly reports that nearly half of businesses in Afghanistan and Bangladesh have experienced at least one bribe request, with around 30 percent of Pakistani businesses saying the same.

The Trace International ranking of how likely companies
are to face bribe demands in different countries.

Bust to boom. India’s Yes Bank was once the world’s worst performing banking lender. But its stocks have made the biggest gains among its peer group to rally by 50 percent. With founder Rana Kapoor out as of October, a new management team under Ravneet Gill has courted wealthy investors to revive the bank’s fortunes. One of them is the billionaire investor Rakesh Jhunjhunwala, who may have bought as much as $1.2 billion worth of shares.

Life on the line. With tensions between Indian and Pakistan increasing during the fall, the Line of Control, the de facto border that divides disputed Kashmir, has seen increased shelling from both sides, forcing locals to abandon their homes. The journalists Muddasir Ali and Majid Maqbool report from the region for Foreign Policy.

“Larger than life.” As the protests against Prime Minister Imran Khan show, Pakistani politics are often an unpredictable mix of big personalities, strong-arm tactics, shifting party alliances, and rage—themes that work their way into Sheheryar Sheikh’s new novel, Call Me Al: The Hero’s Ha-Ha Journey. The work of fiction is a thinly veiled account of the rise of Altaf Hussain, the leader of the Muttahida Quami Movement, a party that held a lock on politics in Pakistan’s largest city, Karachi, for decades. “Larger than life, diabolically callous and yet, at times, almost touchingly human, Al is given so many diverse aspects by Sheikh that the book occasionally seems like a mini-refraction of the terrifying ‘Guernica,’” one reviewer writes.

That’s the estimated number of Sikhs worldwide. Of those, the majority live in India, concentrated mostly in the northwestern state of Punjab.

And that’s it for this week.

The Long Game Podcast: Sports Activism and the 2022 World Cup

The Long Game Podcast: Sports Activism and the 2022 World Cup