A police raid against student activists on university grounds marks a new phase in the city’s ongoing unrest.

Welcome to Foreign Policy’s weekly China Brief. The highlights this week: Hong Kong’s police target university campuses, a potential legal clash between China and Vietnam, and why China’s Uber is being criticized for sexism.

Welcome to Foreign Policy’s weekly China Brief. The highlights this week: Hong Kong’s police target university campuses, a potential legal clash between China and Vietnam, and why China’s Uber is being criticized for sexism.

After another violent weekend, Hong Kong police laid siege to the Chinese University of Hong Kong (CUHK) on Tuesday, firing tear gas and rubber bullets inside the campus. But the university’s hilly location was ideal defensive terrain: Students blocked police from crossing a footbridge while pelleting them with homemade weapons, leading to a dramatic clash. More than 100 students were injured. At CUHK, which has 20,000 students, the raid seemed deliberately provocative: There was no campus protest before the police arrived, according to a professor.

During five months of unrest, university campuses have remained sanctuaries from riot police, despite being centers of student activism. But mainland students have largely fled Hong Kong universities, returning across the border to Shenzhen, and most schools have now suspended classes or moved them online after this week’s clashes.

Spiraling violence. Showdowns between police and protesters, once limited to weekends, have become a 24-hour affair in Hong Kong. And the police are increasingly using live fire. Over the last 10 days, one protester died after a fall and one was critically injured by a police bullet. A man was set on fire by two protesters after shouting pro-Beijing slogans. Meanwhile, since returning from Beijing last week, Chief Executive Carrie Lam’s rhetoric has become more extreme, including describing the protesters as “enemies of the people.” The violence will only get worse as peaceful protest becomes harder to achieve.

Public solidarity? The government seems to be betting that the chaos will turn the public against the protesters. But as police brutality spreads, affecting children and retirees, the opposite seems to be happening. Even professional Hong Kongers feel alienated by the authorities. (The people who complain the most about their lives being disrupted tend to be expats.) As Zeynep Tufekci points out in the Atlantic, professionals’ knowledge of mainland oppression plays a big role in fostering solidarity with the protesters.

A China-Vietnam clash. Ongoing tensions between Vietnam and China over disputed claims in the South China Sea could end up in court, a Vietnamese official suggested this week. That would be a big deal. Although China rejected the results of a similar case brought by the Philippines to the Hague in 2016, Philippine President Rodrigo Duterte’s obsequious attitude toward Beijing quickly took some of the sting out of his country’s court victory. But Vietnam could be tougher-minded.

Israeli concerns on the rise. The China-Israel economic relationship, especially in technology, has been a quiet success story over the last decade. But Israel, under U.S. pressure, is starting to think twice about security concerns. A new body is set to oversee foreign investments by Israel, and Chinese money is a major target. Meanwhile, the influence of Israeli strategies on China’s state control in Xinjiang is being explored by academics.

Pressure on Zimbabwe. Another little-known relationship is that between China and Zimbabwe, which is now heavily dependent on Chinese financial support. (Beijing may have played a role in negotiating former Zimbabwean President Robert Mugabe’s departure.) Zimbabwean media now claims that China is pressuring current President Emmerson Mnangagwa to resign in favor of Gen. Constantino Chiwenga, a regular visitor to Beijing.

Plague outbreak? This week, a state attempt to censor news of two cases pneumonic plague in Beijing failed, sending the China-watching internet aflutter. The decision was later reversed and a public health warning put out. Despite its grisly associations, plague is not a huge public health concern. Both the United States and China see cases every year as a result of people coming into contact with mammals that commonly carry the disease, such as prairie dogs.

Singles Day. This world-weary headline from the New York Times captures the way a lot of China tech correspondents feel about Nov. 11—the hyped Chinese “Singles Day” sales, or the online equivalent of Black Friday. The tradition was hijacked by e-sellers in the 2000s, and it is now an excuse for Alibaba to ring up huge profits every year. China’s e-commerce sector is huge, but it’s also dependent on cheap migrant labor for delivery—a model that’s proving hard to sustain as cities shut out the poor.

Ride-sharing sexism. DiDi is known as the Chinese Uber. Not only is it the country’s most used ride-sharing app, but it has also logged some major public-relations mishaps. DiDi’s model, which relied on rural drivers, was hit hard when cities demanded drivers have urban residency permits. But the latest PR issue is a decision to reinstate a carpooling feature—shut down after numerous sexual assaults and two murders—and to ban women from using the service after 9 p.m. The move was reversed, but it illustrates how Chinese tech may be even more of a boys club than Silicon Valley.

Chinese hacks. A Chinese group likely hacked a U.S. manufacturing industry group earlier this year at the height of the U.S.-China trade talks, Reuters reports. China isn’t likely to give up such cyberespionage, even with an eventual trade deal. Not only is it an effective tactic, but it’s also a major component of the military-party complex. Any promises on paper would be as trustworthy as Beijing’s repeated denials that its military has ever even used a computer.

Who Thinks Hong Kong Is a Democracy?

Perceptions of Democracy in Hong Kong 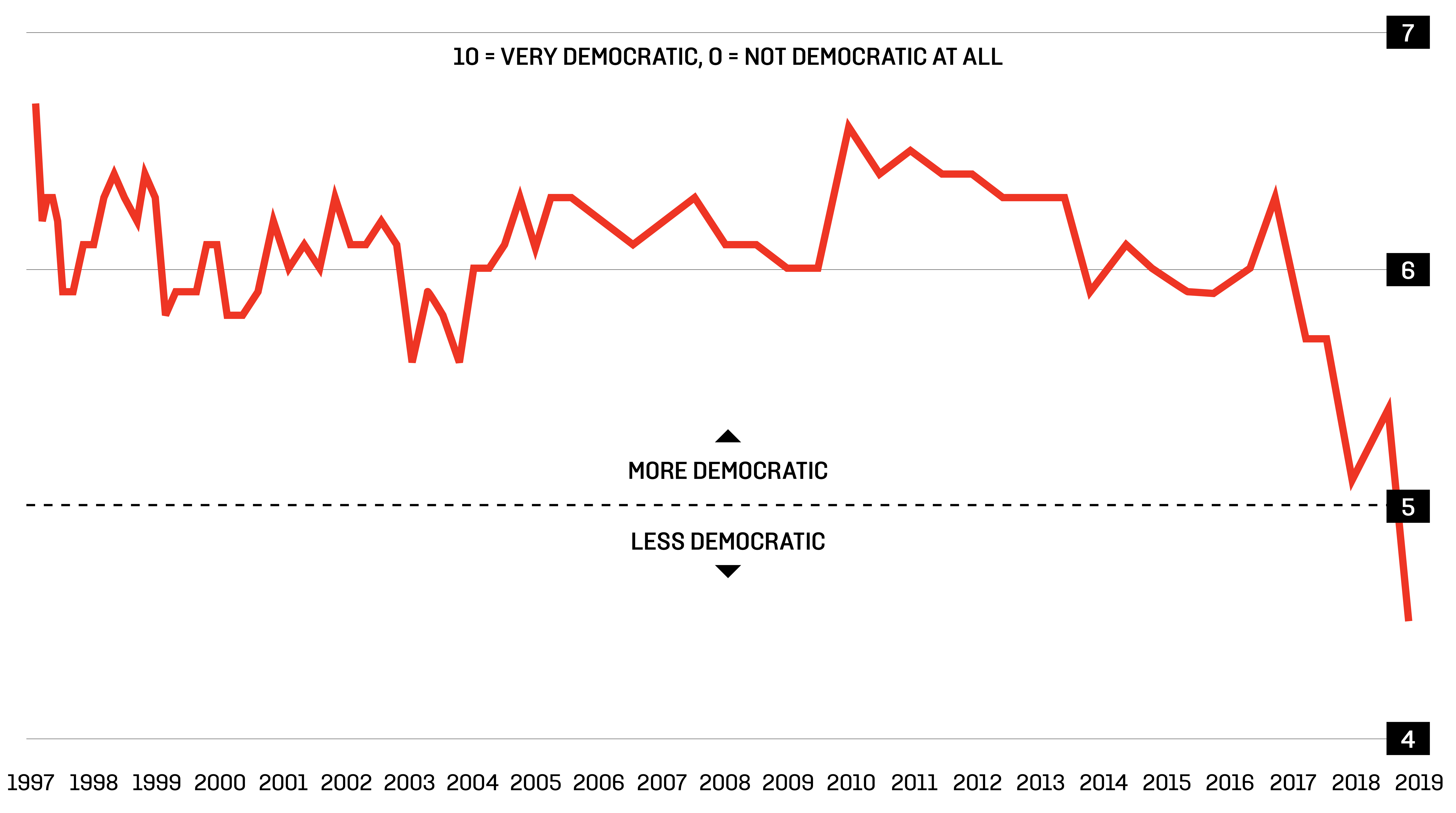 Hong Kong has never actually been fully democratic, though it has always had a lot of the trappings of democracy: a thriving civil society, freedom of the press, and an independent judiciary. But as Beijing’s grip has tightened, Hong Kongers have become significantly more skeptical of their own system, as shown above. 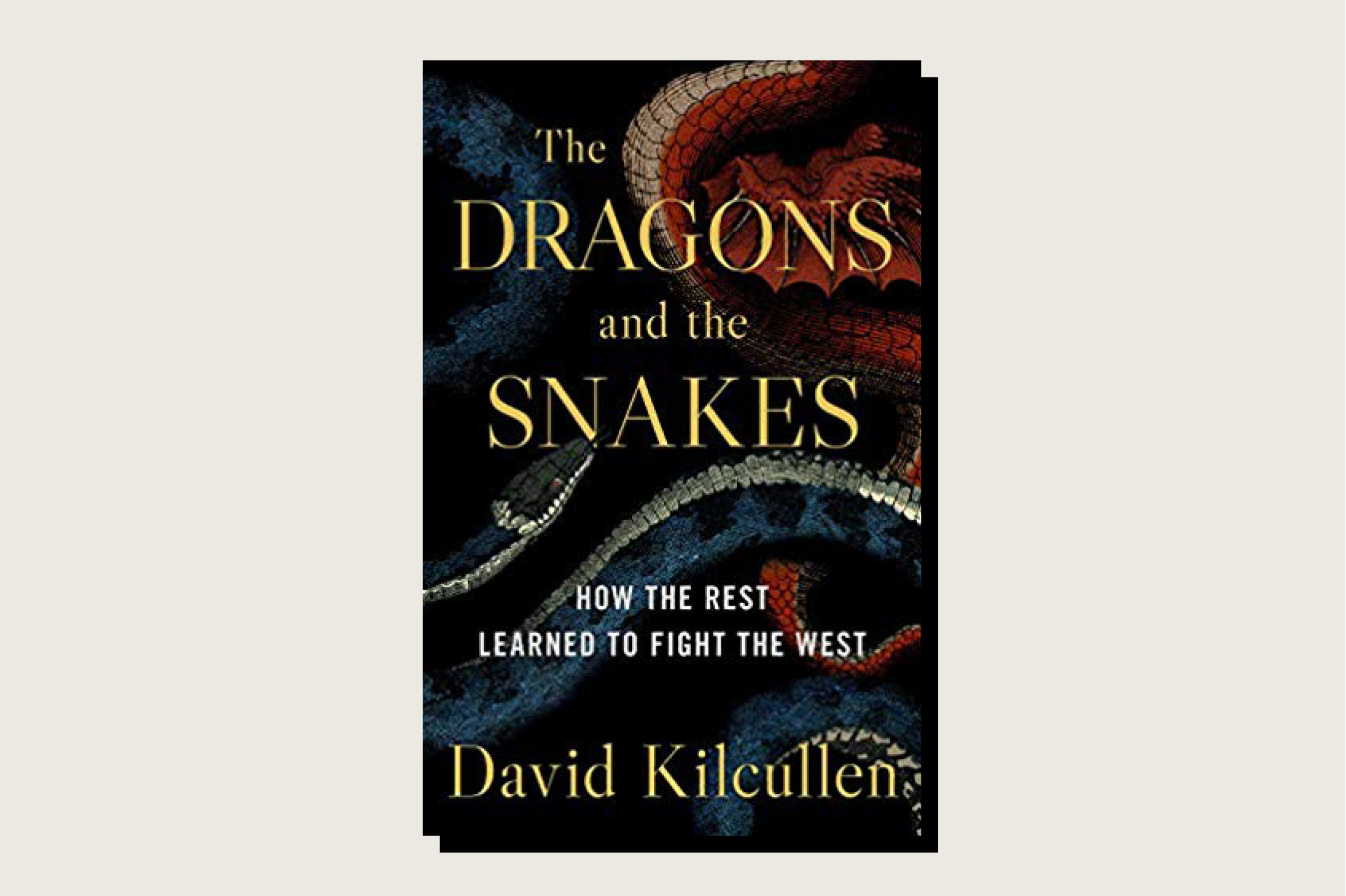 The Dragons and the Snakes: How the Rest Learned to Fight the West, by David Kilcullen (March 2020)

This book, which comes out in March 2020, is a fascinating exploration of what China and Russia have learned from nonstate actors and the shifts away from the conventional battlefield by an expert in nonconventional warfare. Kilcullen is not a China specialist, but he’s a smart reader of Chinese strategy, particularly about the ways in which the People’s Liberation Army appears to be dangerously misreading the United States.

Everyone knows the Black Death, but it was just the second of three great bubonic plague outbreaks in Eurasia. The first was the sixth-century Plague of Justinian, which may have killed one in five people on earth at the time. The last was the Third Pandemic, which broke out in Yunnan province in China in 1855—just under 165 years ago. Deforestation in Yunnan caused human-animal interactions that led to the outbreak of bubonic plague, which was then spread by soldiers. The plague was largely confined to Asia, with tens of millions of people dying over the next few decades in China and India—one likely reason it’s almost unknown in the West.