Until the country can address its own economic problems, agreements like the RCEP may do more harm than good.

In late October, India decided to pull out of a massive trade deal, the Regional Comprehensive Economic Partnership (RCEP), which would have included 16 countries and covered around 40 percent of the global economy. Indian Prime Minister Narendra Modi announced his decision at an RCEP summit held in Bangkok in early November. The negotiations, he said, failed to address India’s “outstanding issues and concerns.”

India’s objections to the trade agreement aren’t hard to understand. For one, India has trade deficits with 11 of the 15 other RCEP members, many of them sizable. Taking that into account, at the start of negotiations, India had demanded a three-tiered structure for phasing out its tariffs for different groups of countries. For example, India would have provided an initial tariff reduction on 65 percent of goods from members of the Association of Southeast Asian Nations (ASEAN), with reductions on another 15 percent phased in over a 10-year period. For countries such as Japan and South Korea, with which India already had trade agreements, the reduction would be on 62.5 percent of items. The rest of RCEP members, including China, which doesn’t currently have a free trade agreement with India, would have received a reduction on 42.5 percent.

Facing stiff opposition to its tired approach, by 2017, India had offered to liberalize tariffs on 74 percent of goods from China, Australia, and New Zealand, and on up to 86 percent for other RCEP members. But the ASEAN nations and other RCEP members still wanted India to make deeper concessions and commit to future tariff cuts on 92 percent of tariff lines across all countries. Further, in 2019, the members indicated that India would also have to accept the immediate elimination of its import duties on more than one-fourth of the items it trades once RCEP comes into effect.

It wasn’t clear whether the benefits of RCEP would make up for the costs.

As a country with one of the highest average tariff rates on all imports among RCEP members, India would be among those making the largest cuts to get tariffs to zero. It also wasn’t clear whether the benefits of the deal would make up for that cost: According to a report by NITI Aayog, an Indian government think tank, purchases of Indian exports have been more linked to changes in income in other countries than to changes in the prices of goods themselves resulting from trade concessions. On their own, tariff reductions by RCEP member countries were not necessarily likely to significantly boost imports of Indian goods around the region.

Another major issue for India was the potential that opening up its market to China, another RCEP member, would lead to a flood of cheap Chinese goods crowding out Indian-produced products. India’s trade deficit with China accounts for about 50 percent of the country’s total trade deficit. And the gap has grown tremendously since China’s accession to the World Trade Organization in 2001. India was legitimately concerned about what a second wave of opening up would do to the existing deficit—one that developed even without a free trade agreement with China.

IMPORTS AND EXPORTS SINCE 2001, IN BILLIONS USD 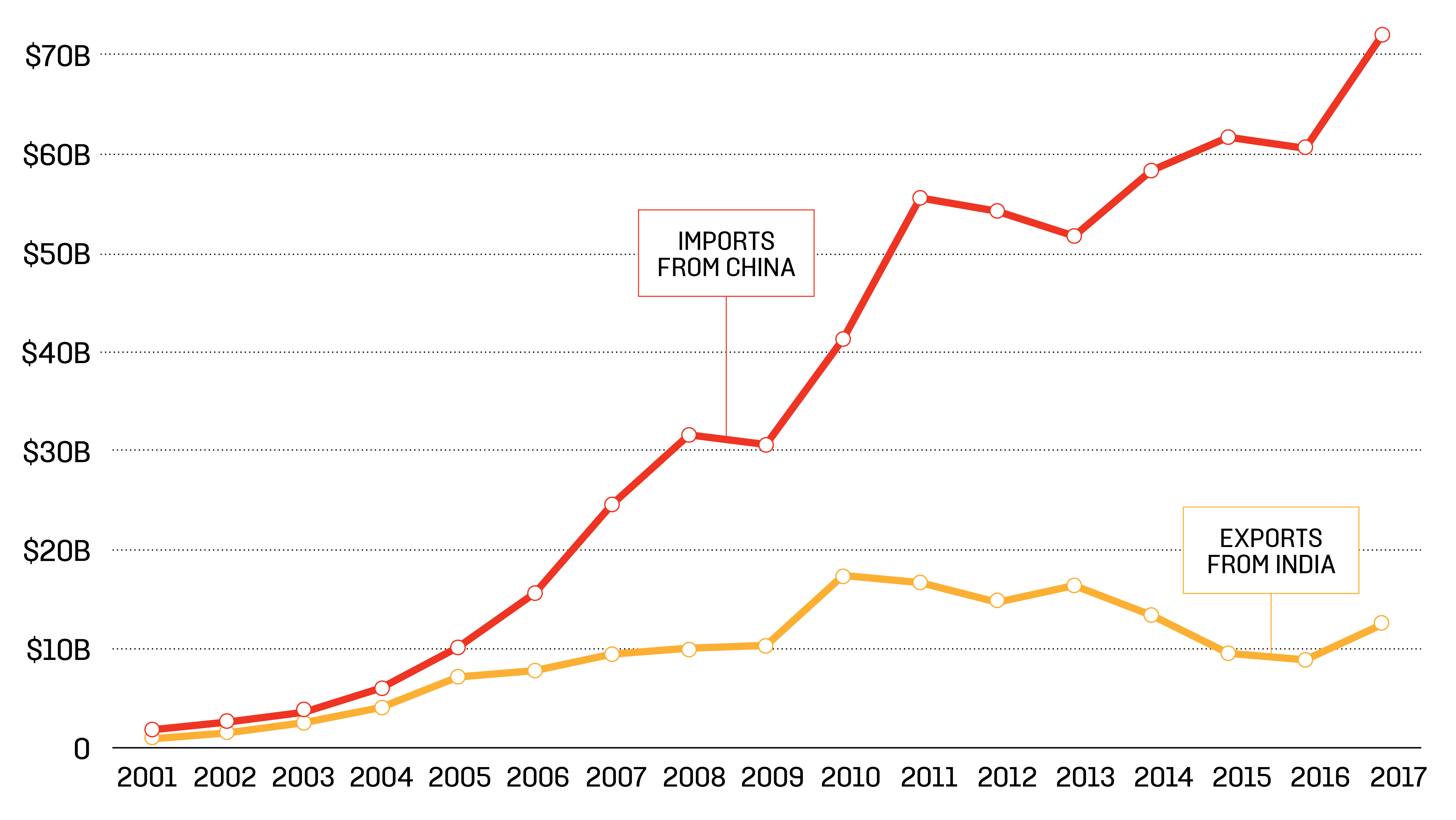 To protect its domestic industries from surges in cheaper imports, especially from China, India had been negotiating with the RCEP members for a mechanism that would automatically snap back safeguard duties on imports if a certain threshold, to be mutually decided by members, were crossed. India had wanted a system that would kick in automatically so any damage to its economy could be contained immediately, but there was no agreement on this issue.

Another problem for India is that, even with a safeguard against soaring direct Chinese imports, Chinese goods could still have found their way into the Indian market via third countries if the RCEP’s rules of origin were not tightened, as demanded by India. India had preferred requiring a value-add of greater than 25 percent for an exporter to count as the country of origin of a particular product. But the RCEP’s rules instead allow value addition to take place in any of the member countries.

A final contentious issue with RCEP was related to trade in investments and intellectual property rights. India had objections to the inclusion of a controversial investor-state dispute settlement mechanism that would allow large multinational firms abroad to challenge India’s domestic laws. RCEP also included proposals that go beyond WTO rules for intellectual property. Two particularly controversial proposals included demands for data exclusivity—which refers to the protection of clinical trial data that regulators require to prove the efficacy of a new drug—and patent term extensions, which are given to compensate for delays in processing patent applications that would essentially expand a patent period to more than 20 years. Both of these provisions would have hurt one of India’s major exports: generic pharmaceutical products. They would also have impeded access to inexpensive generic drugs within India.

Beyond the specific issues with the RCEP, India’s past experience with regional trade agreements had given the country little reason to expect that the benefits of free trade would make up for the challenges.

India has 15 existing regional trade agreements. The signing of each has led to greater bilateral trade, but with imports increasing substantially more than exports, according to the NITI Aayog report. In turn, India has made no net gains from past agreements. To be sure, part of the reason is its own inverted duty structure, which taxes imported finished goods at a lower rate than raw materials, making Indian-constructed goods uncompetitive. Without substantial changes to its own tax codes, the new agreement could do the same.

That’s why many Indian businesspeople and agricultural interests had been wary of the country joining the RCEP and were putting increasing pressure on New Delhi to protect the domestic manufacturing, produce, and dairy sectors. The farming community had also appealed to the government to keep agricultural produce and dairy out of RCEP. Modi’s decision to opt out of the agreement entirely was hailed by the steel, auto, copper, and aluminum industries in particular.

In truth, Indian manufacturing is simply not yet equipped to take on competition from outside. And that relates to a failure to undertake tough reforms at home. India’s manufacturing output has been stagnant at 15 percent of GDP for several years, despite attempts to increase the share. Indian manufacturers face supply-side constraints such as a lack of proper infrastructure—roads are poor, energy shortages are common, and so on. According to India’s 2018 economic survey, logistics costs in the country are estimated at about 13 to 14 percent of GDP as compared to about 8 percent in developed countries. Meanwhile, inflexible labor laws disincentivize firms to grow beyond a limited size and thus complete globally.

However, given the current state of the economy—it is witnessing its slowest growth in many years and is suffering from a lack of demand—the government’s decision makes sense as a short-term way to protect the country from further outside shocks. If it wants to fare better in the long term, though, India should take the opportunity to reform its domestic policies and streamline its existing free trade agreements so it can reap the intended rewards.

India is Trump’s Next Target in the Trade War

As sea levels rise and storms become fiercer, container shipping could be in for major disruptions.