Gotabaya Rajapaksa may have won a majority of votes, but he will struggle to unite a divided nation.

Sri Lanka’s new president, Gotabaya Rajapaksa, promised at his swearing-in on Monday to ensure tolerance for all religions and cultures, but it might not be so simple. Rajapaksa won 52.3 percent of the vote on Saturday. He was supported—by his own admission—mainly by the Sinhalese majority, most of whom are Buddhists. Minority Tamil Hindus and Muslims voted mostly for his opponents.

Both minority groups have reason to fear their new government. Rajapaksa was Sri Lanka’s defense minister from 2005 to 2015, overseeing the brutal crushing of the Tamil separatist movement and ending 25 years of civil war. The United Nations Human Rights Council is still waiting for Sri Lanka to conduct a credible investigation into war crimes in those years.

Rajapaksa’s role in ending the civil war solidified his reputation as being tough on terrorism, and voters likely saw him as someone who could have prevented the country’s Islamic State-inspired Easter bombings, which killed 277 people in April. Since the attacks, Muslims have faced violence and discrimination by hard-line Buddhist groups. After campaigning to protect Buddhist interests, an early challenge for Rajapaksa will be to unite his polarized country.

Brothers in autocracy. Gotabaya Rajapaksa could appoint his brother, former President Mahinda Rajapaksa, as prime minister. When they ran Sri Lanka together as president and defense minister, the two tended toward authoritarianism. Gotabaya Rajapaksa, nicknamed “The Terminator” by his own family, developed a tough reputation for alleged extrajudicial killings and abductions of Tamil separatists and journalists. He has denied those charges, as well as others of corruption and kickbacks from defense deals.

China or India? Under Mahinda Rajapaksa’s presidency, Sri Lanka grew closer to China as it increasingly received Chinese funding for large-scale infrastructure projects, taking on debt. In 2017, after Mahinda Rajapaksa was voted out, Sri Lanka handed over its Hambantota Port to China and the 15,000 acres of land around it for 99 years as payment. Sri Lanka began to move closer once again to India, its more traditional ally.

A big question for the second round of Rajapaksa rule is whether Colombo will pivot again toward Beijing and what that would mean for the region’s power dynamics. In a speech on Monday, Gotabaya Rajapaksa said his administration would “remain neutral in our foreign relations and stay out of any conflict of world powers.” That could lead to warming ties with the United States. But the president’s immediate focus will have to be on the economy, which grew by just 1.6 percent last quarter. Both the rupee and Colombo’s stock index rose sharply on the news of Rajapaksa’s win.

Double refugees. After fleeing what international observers have called a genocide in Myanmar, hundreds of Rohingya refugees are finding their lives in Bangladesh’s camps intolerable. Last week, Bangladesh’s coast guard rescued 122 Malaysia-bound Rohingya refugees in the Bay of Bengal after their boat started sinking. The refugees left the camps in Bangladesh’s Cox’s Bazar, where many struggled to find employment. Since the beginning of October, officials say the coast guard has rescued another 200 people attempting to get to Malaysia, trips that are often arranged by human traffickers. Acknowledging the overcrowded conditions in the camps, Bangladesh recently announced that thousands of Rohingya refugees agreed to move to an island in the Bay of Bengal, despite criticism from rights groups.

India’s new map draws controversy. This month, India issued a new political map that shows Jammu and Kashmir, as well as Ladakh, as part of its territory. Pakistan immediately rejected the map, which it said included territories that are actually under Pakistani control. Another country is now up in arms. Nepal has seen protests over the inclusion of Kalapani, a territory its claims as its own. India’s External Affairs Ministry reiterated that India hasn’t revised its border, but that did not stop Nepali Prime Minister K.P. Sharma Oli from demanding that India revise the map and withdraw its army from the area.

Bombs away in Pakistan. Pakistan has successfully launched a nuclear-capable surface-to-surface missile, a move it says was part of a training exercise for the Army Strategic Forces Command. The missile has a range of 650 kilometers, or almost 400 miles, bringing some cities in western India and Indian-administered Kashmir within striking distance. The test follows the practice launch of a shorter-range ballistic missile in September.

In Sri Lanka over the weekend, voter turnout was 83.7 percent, high even for a country where a large majority of registered voters showed up at the polls for presidential elections.

Three other South Asian nations had major elections this year. How do they rank for voter turnout, in ascending order?

New kids on campus. In the 2018-2019 academic year, the United States welcomed over 1 million international students to university and other programs. Of the total international student population, about 34 percent come from China and 18 percent from India, together making up over half. Among the top 25 origin countries were three other South Asian nations: Bangladesh, Nepal, and Pakistan. Although each contributed a far smaller number of students than India, as a share of its population Nepal’s 13,229 students in the United States stand out. 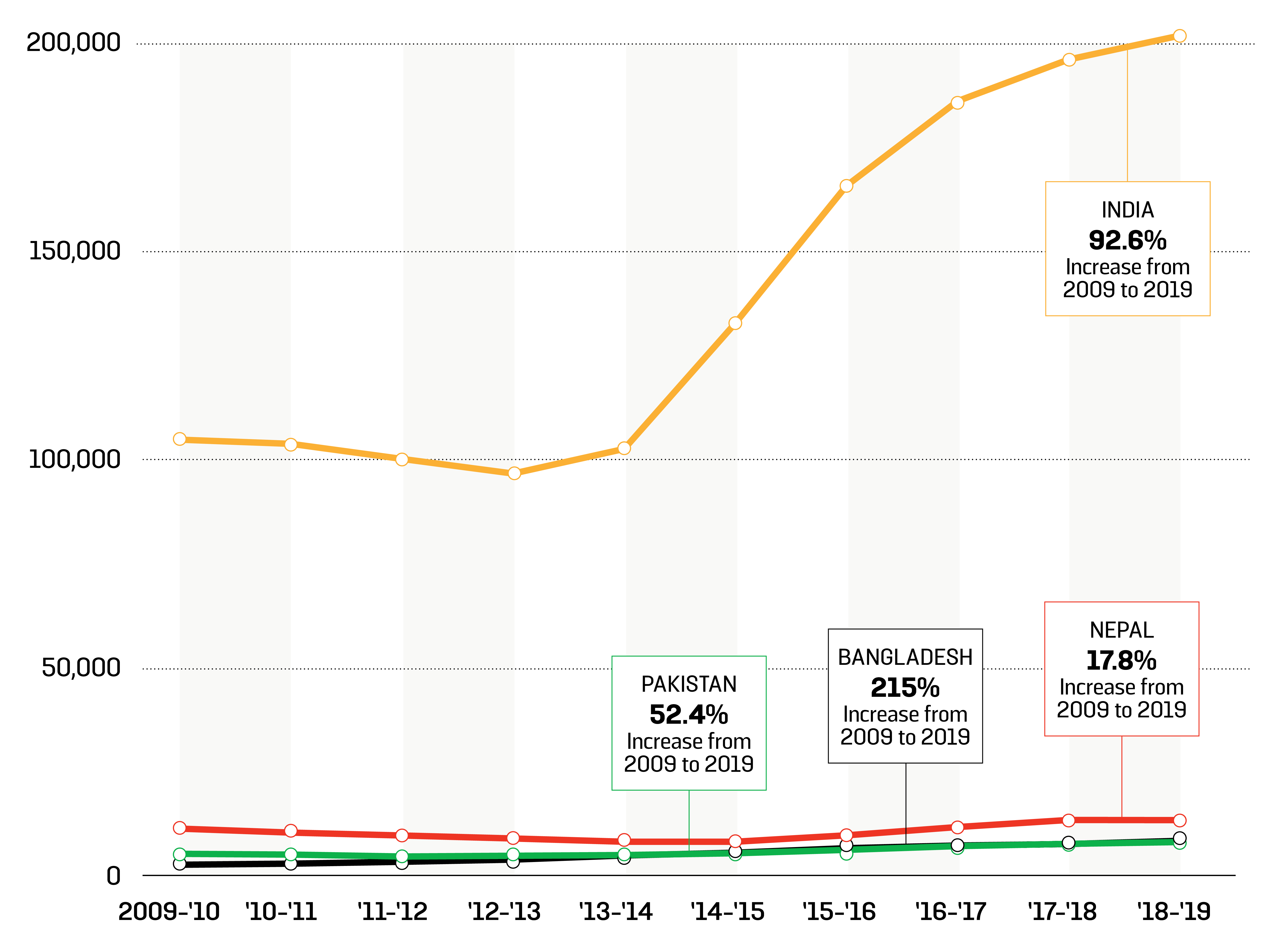 Onion emergency. Bangladesh is importing tons of onions from Myanmar, Turkey, China, and Egypt amid growing anger over the vegetable’s soaring prices. India, facing its own public outcry over a weak yield this year, banned exports of the precious bulbs in September, leading to shortages across South Asia.

The eighth plague. Pakistan is facing its worst plague of locusts since the 1990s, destroying up to 40 percent of crops in some areas. The insects have descended on some of Pakistan’s poorest rural areas, but they have also reached the country’s biggest city, Karachi. The Weather Channel has striking footage of the insects, and one local minister offers a recipe for locust biryani.

Joy ride. The term “scooter sharing” may bring to mind fleets of stand-up electric scooters in the streets of Western metropolises. But the biggest single-country market for sit-down shareable scooters is India, where between 15,000 and 20,000 are in operation. That puts the country well ahead of other front-runners, including Spain, France, and Italy. Foreign Policy’s C.K. Hickey lays out the numbers.

The turnout for Afghanistan’s election in September may have been as low as 20 percent, with voters plagued by fears of violence. For such a large country, India pulled in a respectable 67 percent in the spring. And the Maldives saw a reported 78 percent turnout in April. But none could beat reigning Sri Lanka, where national elections seemed to come down to security following the Easter terrorist attacks this year.