Is China Detaining Hong Kong Protesters on the Mainland?

Claims by a Hong Kong citizen held for 15 days in August could stir even more anti-China anger in the city.

Welcome to Foreign Policy’s weekly China Brief. The highlights this week: A new account from a Hong Kong employee of the British consulate detained in mainland China could inflame Hong Kong’s unrest, the U.S. Senate backs Hong Kong’s protesters, and a Sackler family firm is marketing OxyContin in China.

Welcome to Foreign Policy’s weekly China Brief. The highlights this week: A new account from a Hong Kong employee of the British consulate detained in mainland China could inflame Hong Kong’s unrest, the U.S. Senate backs Hong Kong’s protesters, and a Sackler family firm is marketing OxyContin in China.

Simon Cheng, a Hong Kong citizen and former employee of the British consulate, was detained in mainland China for 15 days in August on trumped-up charges of soliciting prostitution, which he says he confessed under torture. Speaking publicly for the first time, he said on Tuesday that he was tortured for by Chinese police, who forced him to record another confession about a foreign plot to stir unrest in Hong Kong.

The British government said it finds Cheng’s story credible. Cheng said that he was shackled, blindfolded, and hooded before being forced into a “tiger chair”—a metal chair that prevents movement often used by mainland police. Before being released, Cheng was threatened and told to keep silent. His account could stir more unrest in Hong Kong.

Paranoia and propaganda. Cheng’s account suggests recurrent paranoia inside the Chinese Communist Party about foreign saboteurs that dates back decades. While it’s easy to dismiss as propaganda, this belief in foreign plots is held by people high up in the system—and perhaps by President Xi Jinping himself. The paranoia has led to innocent people like Cheng being targeted. He was forced to record his confessions on video—a propaganda tactic that’s been increasingly deployed in recent years.

Are there other Hong Kong detainees? Cheng says that he saw other prisoners that he thought were Hong Kong protesters and that heard wailing in Cantonese in the prison. (Though, it’s worth nothing, plenty of mainlanders speak Cantonese.) That account will only further enrage Hong Kongers, as the unrest that began in June was sparked by the fear of suspects in Hong Kong being extradited into China’s legal system.

How has Britain responded? British Foreign Secretary Dominic Raab has summoned the Chinese ambassador in London to express outrage. But China won’t give a public apology: Instead, state media is already doubling down on its attacks against the British. British-Chinese relations, already tense over Hong Kong’s protests, are likely to dip further.

University siege portends more turmoil. Police surrounded Hong Kong Polytechnic University over the weekend, trapping protesters inside and leading to a long battle with students. Police deployed tear gas and rubber bullets, while protesters kept them at bay with Molotov cocktails. Hundreds of students fled or were arrested, though a small contingent remains.

The police assaults against universities and the strip-searching of high school students who returned to class this week have lowered their reputation even further. It’s hard to envision business returning to this climate of public rage and fear. The municipal elections this weekend could provide one way for Hong Kongers to have their voices heard, but only if they’re allowed to go forward, as Dominic Chiu argues in FP.

U.S. Senate backs Hong Kong protesters. On Tuesday, the U.S. Senate unanimously passed the Hong Kong Human Rights and Democracy Act, and the House of Representatives seeks to quickly pass the legislation today. The most serious measure in the act would revise Hong Kong’s special market status—another blow to the territory’s financial credibility. The act’s passage would leave U.S. President Donald Trump in a tricky position: It is likely to harm any progress in the U.S.-China trade talks, but the unanimous vote in the Republican-held Senate could make it difficult to veto.

Beijing threatens to overturn courts. In another blow to Hong Kong’s special status, Beijing has threatened Hong Kong’s High Court after it overturned a local government ban on face masks. A statement from China’s top lawmaking body said that Hong Kong courts couldn’t rule on the city’s laws. If Beijing follows through, it would mean the effective end of Hong Kong’s judicial independence.

A deal with South Korea. A minor arrangement between the defense ministries of South Korea and China drew unusual attention this week, due to the suspension of talks between the United States and South Korea over the costs of their military alliance. The new China-South Korea deal is insubstantial—an expansion of military hotlines and a visit next year—but it has been seen as a sign of South Korea pursuing new security arrangements.

India’s growing trade gap. The U.S. trade deficit with China gets a lot of attention, but the gap between India’s imports from and exports to China may be just as significant, as shown below. Indians buy many cheap Chinese goods, while the Chinese appetite is limited to India’s raw materials such as copper and cotton. The trade deficit has grown tremendously since 2001 and likely played a role in India’s decision to pull out of a massive regional free trade deal early this month, as Harsh V. Pant and Nandini Sarma write in FP.

Imports and exports since 2001, in billions USD 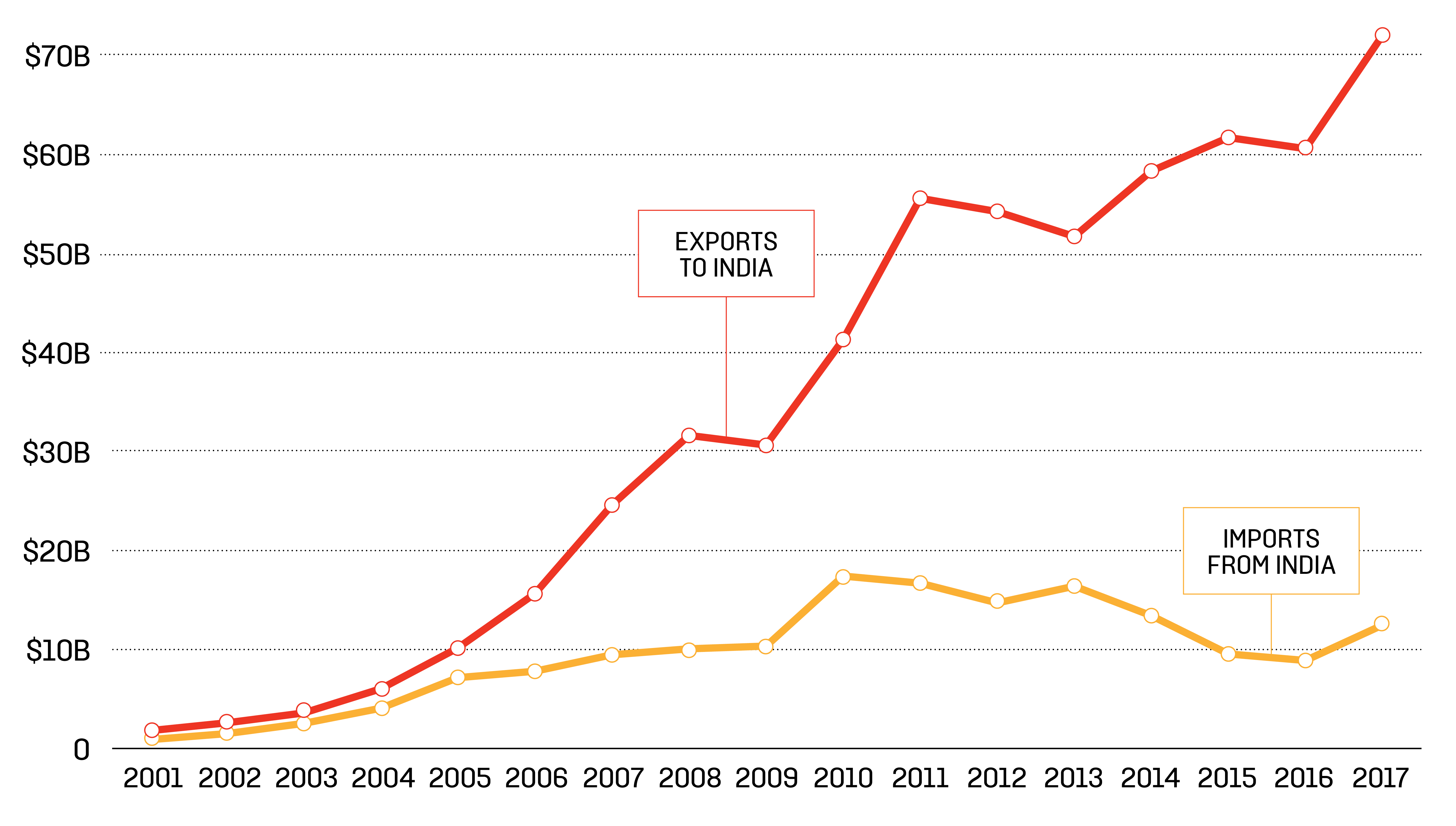 Opium peddling. A firm owned by the Sackler family, which is facing litigation in the United States over Purdue Pharma’s marketing of the painkiller OxyContin, is now using the same tactics that fueled the opioid crisis in the United States to market the drug in China, the Associated Press reports. Pain management in China is a potential gold mine: Over-prescription is common, and medicines that you would need a prescription for in the United States are often available over the counter.

Didi tries to expand. The struggling Chinese ride-hailing app Didi, known as the Uber of China, is still pushing for expansion worldwide, targeting Japan and Costa Rica in particular. That seems like a mistake. Not only is Didi’s core business at home weakening, but the Japanese market is also notoriously resistant to apps and cashless technology—in part owing to an aging population that’s still more comfortable with telephone orders than Amazon.

Where to declare an IPO. A recent survey shows that two-thirds of Chinese business owners say they would rather go public with their companies in China than in the United States. That patriotic answer doesn’t necessarily reflect behavior: Chinese firms have always rushed to list in New York or Hong Kong, in part because of state manipulations of China’s limited stock market. But it’s possible that will change under political pressure. 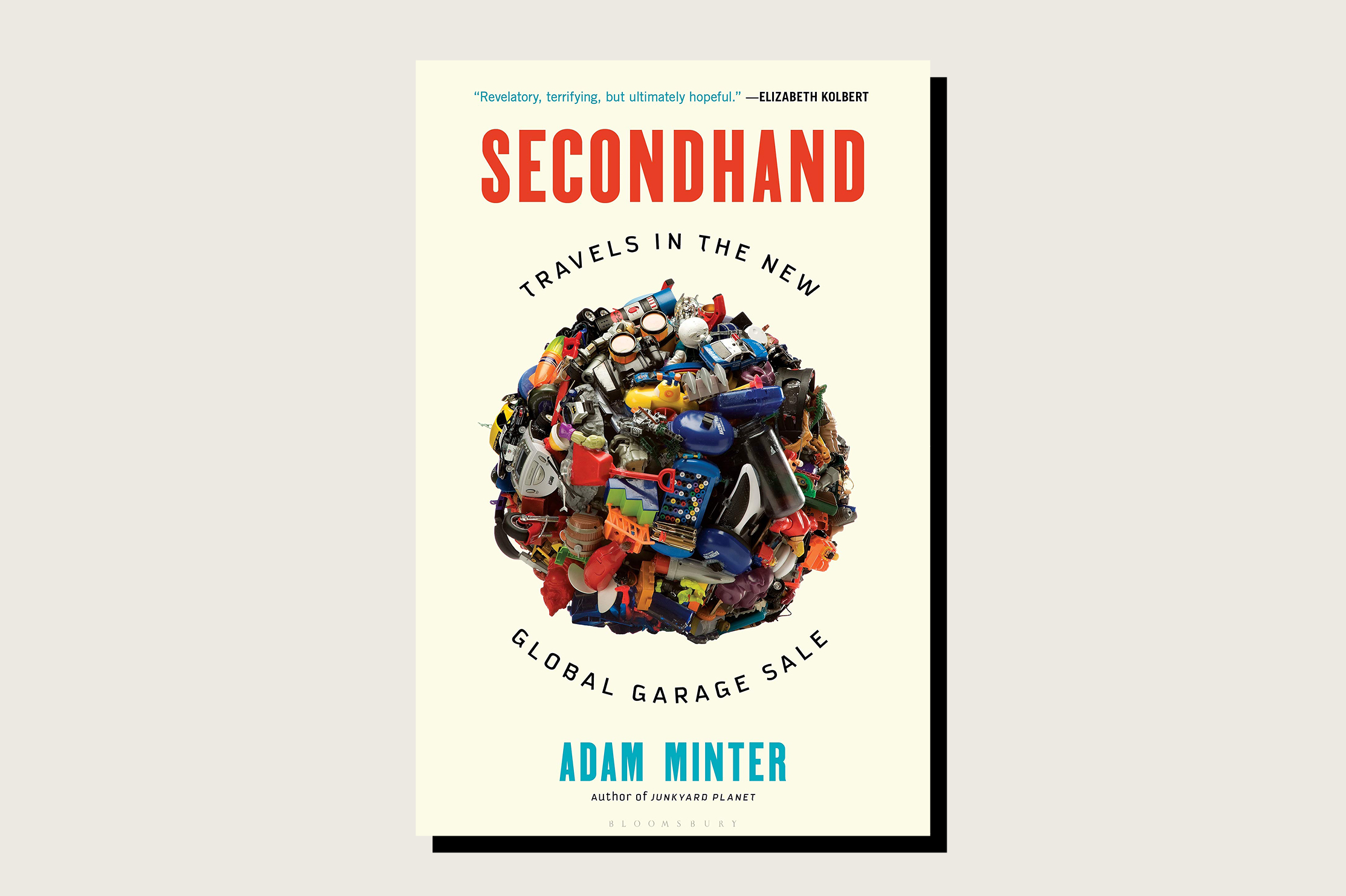 Adam Minter, a former China correspondent, is a leading expert on global scrap and recycling—the subject of his previous book. This new one, released this month, goes deep into the market for secondhand goods. While he makes only a brief mention of China, the rise of Chinese manufacturing is a thread running through the whole story. As quality and price have dropped, the market for secondhand goods has shrunk worldwide—altering economies far beyond China. Minter’s approach manages to be both detail-orientated and a page-turner.

The Pandemic Proves Only Technocrats Can Save Us

Italy Has Learned a Tough Lesson on China

The Pandemic Proves Only Technocrats Can Save Us

Italy Has Learned a Tough Lesson on China