Xi Jinping Knows Who His Enemies Are

A new book lays out the Chinese leader’s stark worldview.

Xi Jinping is a Chinese renaissance man. Self-assured, self-possessed, and utterly unflappable, Xi is equally at home on the hearths of struggling farmers and in the greeting halls of foreign capitals. State media likes to juxtapose the years he spent in the caves of Shaanxi with the days he spent governing Shanghai’s glittering towers. Here is a man as men should be: a leader who can grasp both the plow and the bond market! So things go with Xi Jinping.

Though Xi studied chemical engineering, he presents himself as a littérateur. In Russia, he peppers his speeches with Dostoevsky and Gogol; when in France, Molière and Maupassant. To better grasp the meaning of The Old Man and the Sea, Xi traveled to Ernest Hemingway’s favorite bar in Havana. Xi has a hankering for historical sites like these, especially those associated with famous scenes from the stories of Chinese antiquity. He cultivates a reputation for taking history seriously; his speeches are filled with allusions to obscure sages and statesmen from China’s past. 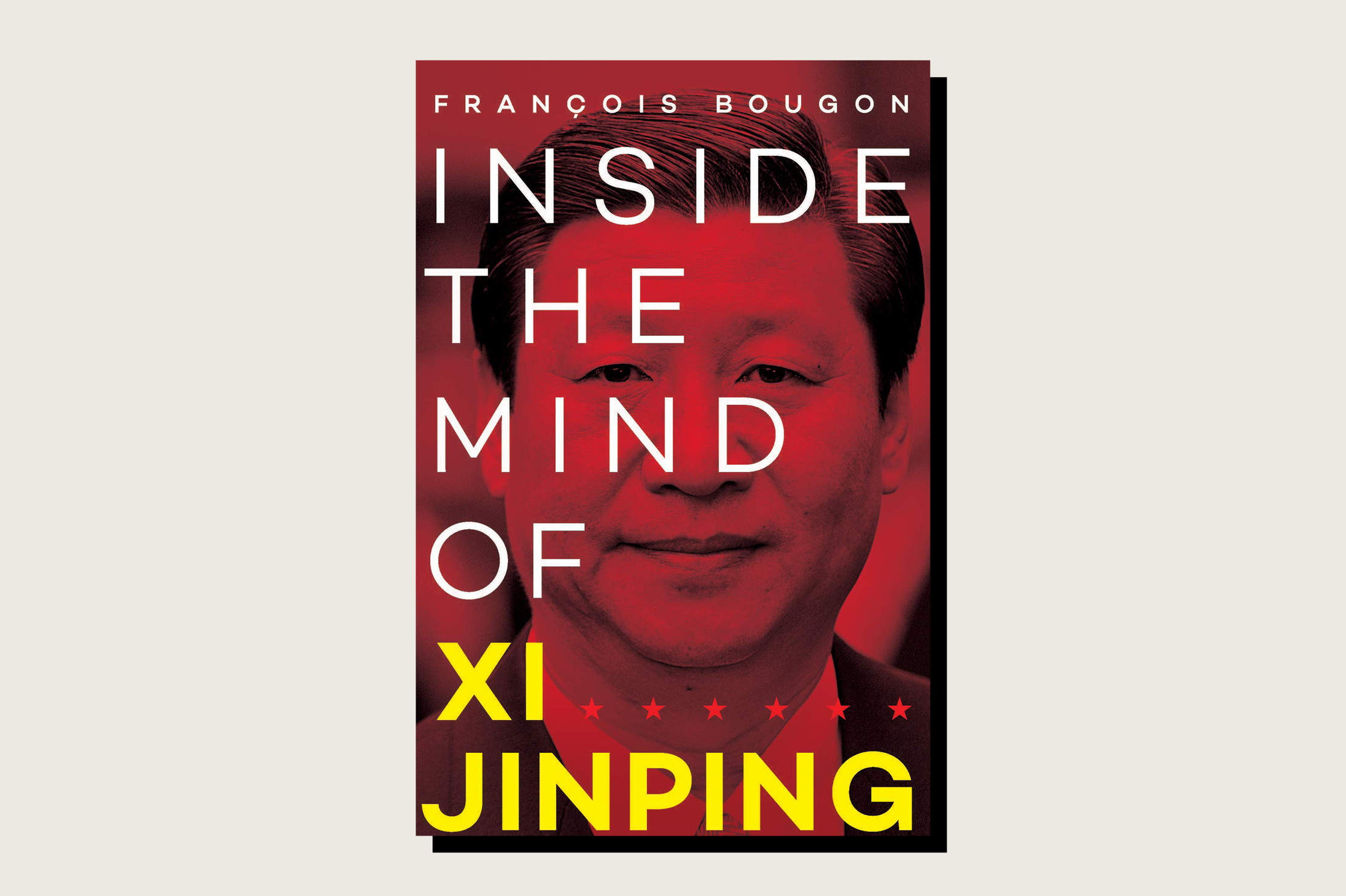 But Xi is also eager to present himself as a man of the future. He revels in touring laboratories and centers of scientific innovation. He dabbles in complexity science and has tried to integrate its findings into Chinese Communist Party policies. There is a certain flexibility to China’s leader: To financiers, he adopts the argot of debts and derivatives. To Davos revelers, he drifts easily into the trendy buzzwords of the global business class. To soldiers, he speaks in military idiom (on many occasions happily attired in army greens), and to party members, the jargon of Marxist theory. For the common people of China, he consciously models an ideal of patriotic service and loving family life.

But what of the person behind the persona? Unearthing that man is the goal of François Bougon’s book Inside the Mind of Xi Jinping, translated from the original French into English in 2018. A journalist and editor who covered China throughout the Hu Jintao and Xi eras, Bougon aims to untangle the web of literary, historical, and biographical influences that have shaped Xi’s ideology. Bougon’s conclusions may surprise: His Xi is not far removed from the propaganda caricature. Though he undoubtedly has a cohort of speech writers ready to supply him with learned literary allusions, Xi’s public image is grounded in fact. Xi is comfortable in the presence of both the princelings and the poor. Xi genuinely treasures literature. He has a sincere love for China’s historical heritage.

That is all real. But it is a reality used for larger purpose. Xi’s constant allusions to traditional Chinese thought, for example, are not mere flashy displays of personal erudition. Behind “this wide-ranging borrowing,” Bougon observes, is “a sign that [Xi] finds the Marxist-Leninist base solid enough to graft onto it the long history of ‘wonderful Chinese civilisation.’” Xi’s allusions signal to party members that one can be a proud Marxist and proud of China’s traditional culture at the same time. So-called “Xi Jinping Thought” promises to weave the strands of China’s history and heritage into one grand whole.

Xi generally divides this history into four historical acts. The first is China’s imperial and pre-imperial past, the so-called “5,000 years of history” that culminate in the splendor of the Qing Dynasty (1644-1911) at its height. This, in Chinese terms, is their country’s “ancient history.”

The remaining years are divided into three parts: “the century of humiliation,” in which China was ravished by imperial powers; “the New China era,” Xi’s favored term for China under Mao Zedong; and “the era of socialism with Chinese characteristics,” which began under the guiding hand of Deng Xiaoping and continues on to the present. Xi quite consciously draws inspiration from each of these eras when framing his policies. Most references to China’s pre-modern past are superficial, more important for their aesthetic effect than ideological power. Far more serious is Xi’s quest to reclaim the legacy of New China. Harmonizing the institutions of 21st-century China with the party’s Maoist ideological heritage is central to Xi’s political project. Bougon argues that it is the defining feature of Xi’s inner sense of purpose.

Xi’s driving need to rehabilitate Mao is partly born out of practical necessity. For Xi, venerating the old helmsman is the difference between death and survival. “If at the time of reform Comrade Mao had been completely repudiated, would our party still be standing? Would our country’s system of socialism still be standing?” he asked the Chinese Communist Party Central Committee several days after being elevated to the position of general secretary. Answering his own question, he quoted the words of Deng: “These things cannot be cut away from the entire history of our party and our country. To grasp this is to grasp everything. This is not just an intellectual issue—it is a political issue.”

But this political calculation is only half of the story. Added to it is a sincere emotional attachment to Mao and his era. This nostalgia for Maoism at first seems an incredible delusion. Why does Xi yearn for an era that saw his father, a prominent Communist Party leader, maligned, mother tortured, sister killed, and himself banished? Xi’s own answer to that question: Yanan. Xi’s associates New China not with the terrors his family experienced in Beijing but with the seven years he spent as a “sent-down youth” farming with the same peasants his father had governed 20 years earlier as a young revolutionary. More than a decade before Xi was elevated to dictatorship, he described his time farming the yellow loess of Yanan as “seven years of rural life [that] gave me something mysterious and sacred.”

Xi came to Yanan as a bitter teenager unafraid to flout party rules. (He ran away once during his first year there and spent some time doing forced labor because of it.) He would leave Yanan a man so deeply committed to life in party service that he would apply for party membership 10 times.

Bougon traces how these experiences with the peasants of Yanan formed the bedrock of later political positions: a withering distaste for conspicuous consumption, the belief that corruption among party cadres brings disaster, a idolization for the revolutionary heroes of his father’s generation, and the deep conviction that the party must present the Chinese people with larger ideals worth sacrificing for. “Even now,” Xi said in 2004, “many of the fundamental ideas and basic features that I have formed were formed in Yanan.” Two years earlier, he voiced a similar message: “Wherever I go, I will always be a son of that yellow earth.”

Xi is deeply troubled that the same spirit of self-denial and sacrifice that was instilled in him at Yanan is missing from later generation of party members. (His own belief in his sacrifice has not prevented his family from accumulating immense wealth, both inside China and off-shore in foreign accounts; as with other leaders, Xi has particularly targeted any institution that reports on this.) This is one of the reasons Xi resurrected what Bougon labels the “national imaginary” of Communist China.

Xi delights in the legendary heroes whom Maoist propagandists manufactured in Xi’s childhood: the selfless youth Lei Feng, the incorruptible cadres Jiao Yulu and Gu Wenchang, the martyred soldiers of Mount Langya, and so forth. He invokes their names and examples in speech after speech. The box office failure of three films about Lei Feng in 2013 seems to have been one of the spurs for a renewed insistence on patriotic movies. That their deeds are exaggerations or fabrications does not concern him much. Absent a personal history of sacrifice for the sake of revolutionary ideals, a spirit of consecration must be cultivated through myth. Xi believes he is the personnel caretaker of the national mythos that Chinese society needs to survive and thrive in an era of intense international competition.

This self-conception helps explain Xi’s other great obsession: defeating the so-called hostile forces inside and outside of China that would weaken the people’s faith in the political and ideological system that Xi helms. The view that China is locked in an ideological struggle for survival predates the Xi era—Bougon traces it to the later years of Hu’s administration, but scholars like John Garver and Matthew Johnson have traced the origin of these ideas all the way back to the late 1980s—but it is essential to understanding Xi’s policies. Bougon highlights a speech given in 2009 as especially important statement of Xi’s beliefs: “There are certain well-fed foreigners who have nothing better to do than point the finger. Yet, firstly, China is not the one exporting revolution.”

In numerous speeches, Xi has identified the Soviet Union as the most prominent victim of revolutionary export. The United States and allied hostile forces, he maintains, successfully destroyed the Soviet Communist Party through a strategy of cultural subversion. Xi is determined not to let the same fate befall the Chinese Communist Party. In Bougon’s words, Xi has becomes a “culture warrior.” This culture war is more deserving of that title than the political debates that are given that name in Western countries. It has led to the jailing of historians; crackdowns on internet personalities, human rights activists, feminists, and labor organizers; censorship in literary journals, newspapers, and Chinese social media; an all-out assault on Chinese Christianity; and the labyrinth of detention centers in Xinjiang. It is also, though Bougon does not mention them, the impulse behind the coercion and surveillance of activists, students, dissidents, former officials, and Chinese-language media outlets outside of China’s borders. Culture and ideology spill across borders. To fight his culture war, so must the iron hand of the Communist state.

Bougon conveys all of this with a wry touch. Most readers will find Bougon’s portrait of Xi and his era disturbing and dispiriting. It naturally leads to fundamental questions about the aim of U.S. policy toward China. How should the United States, Europe, and the democracies of the Pacific Rim deal with a regime whose leaders believe that Western ideals and culture pose an existential threat to their rule—even their lives? What enduring compromise is possible with a leader who treats cultural change the way most leaders treat insurrection or terrorism? How do we accommodate a superpower directed by men like Xi? Bougon does not provide answers to these questions. One can only hope that his sharply drawn picture of Xi inspires us to.

Tanner Greer is a writer and strategist based in Taiwan. Twitter: @Scholars_Stage

Beijing is famous for putting engineers and scientists in charge. But that doesn’t make for better leaders.

The Resistible Rise of Xi Jinping

China's president radically changed his country, and the Communist Party, through skill, determination — and a series of lucky breaks.