Life on the Front Lines in Northern Syria

With echoes of shelling from Turkish-allied forces nearby, families sheltering in abandoned villages wonder when they can go home.

TAL TAMR, Syria—“I would rather go back to my village, to be killed in my village, than live here as a refugee,” said Fatima Shlo, 43, as she sat on the ground of her family’s new home. It was early November, and she and her family were living in an abandoned school, destroyed by the Islamic State. A line of pine trees provided little shade from the burning midday sun. Her children played in the concrete ruins of classrooms, and a chalkboard between two concave walls revealed writing from years before: “The Islamic State will remain.”

In the last few weeks, fighting between the mainly Kurdish Syrian Democratic Forces (SDF), the Syrian army, and the Turkish-backed Free Syrian Army had reached Shlo’s village of Malkef on the outskirts of Tal Tamr in northern Syria. Her small community of Arab Muslims had lived amicably alongside their Kurdish and Christian neighbors for generations. But as the sounds of shelling and airstrikes drew nearer, most families there left for the city of Hasakah, some 25 miles from Tal Tamr. They escaped in rented cars or on foot, some children without shoes, holding what belongings they could carry and facing an uncertain future. Shlo’s family was among those who fled. 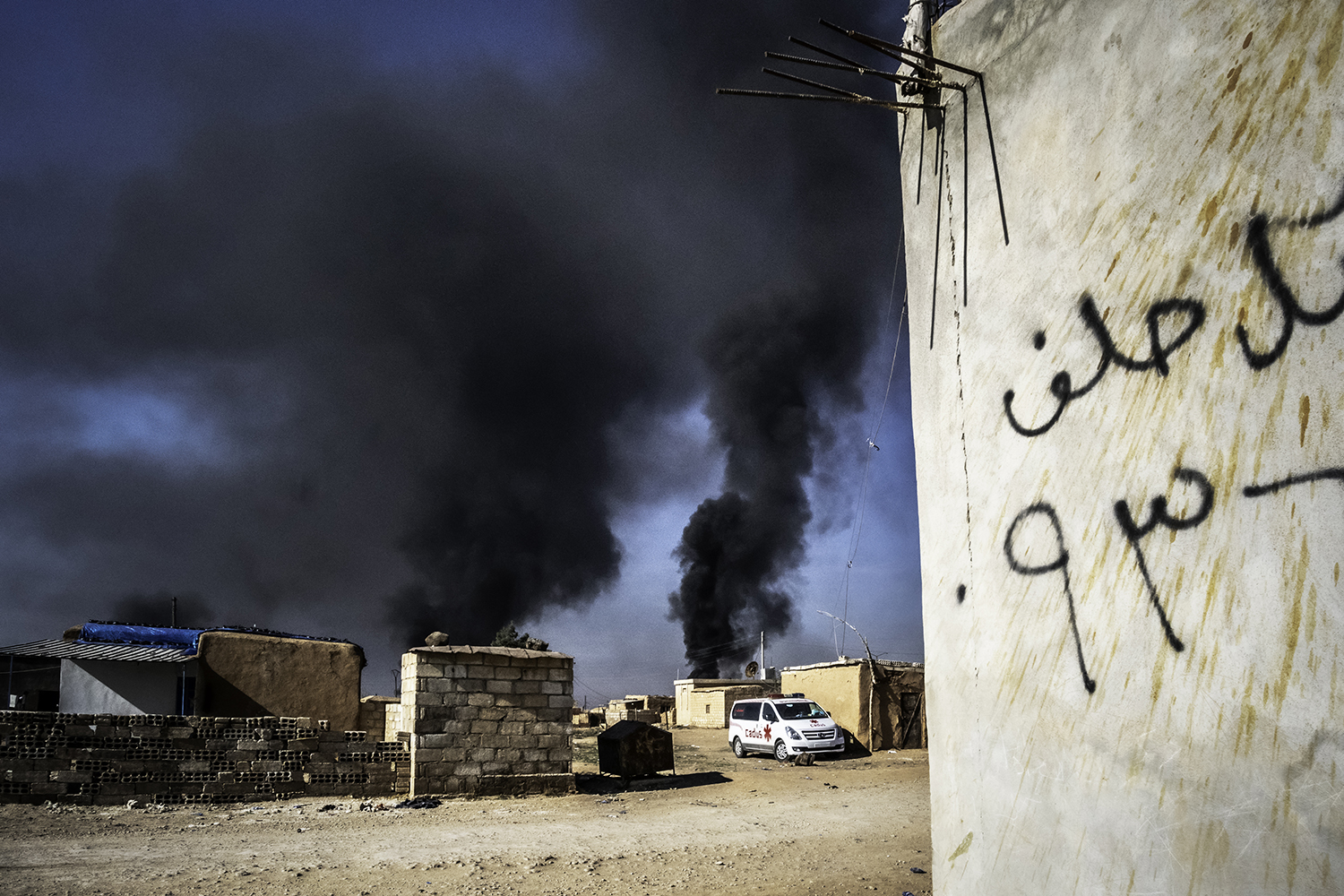 Tire fires burn across Malkef to provide air cover from Turkish jets and drones on Nov. 11. The area is used as a base for the Kurdish Red Crescent, a humanitarian nonprofit organization, to receive wounded from the front line. Jade Sacker for Foreign Policy 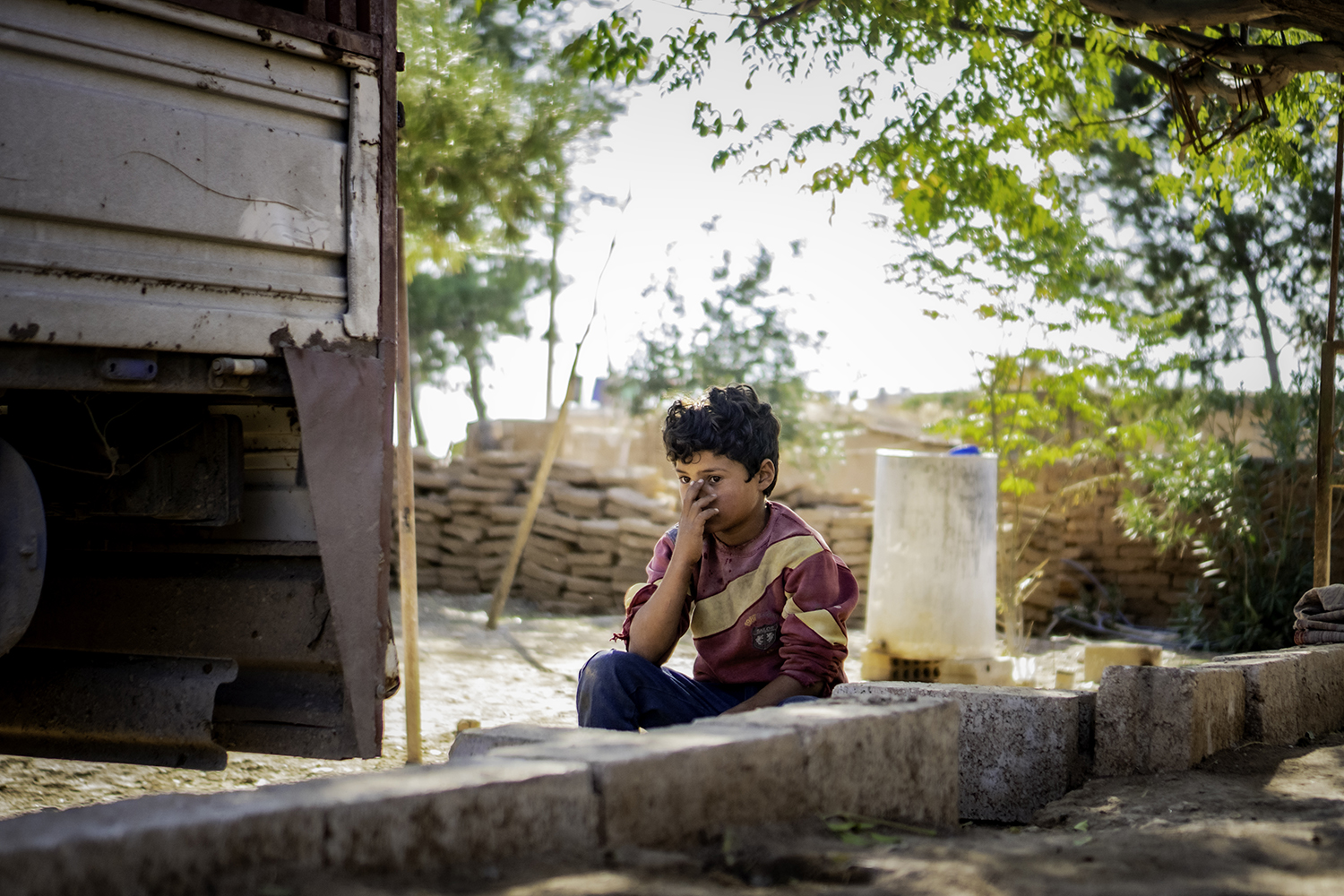 A child sits near a truck loading his family’s belongings as they prepare to flee the fighting in Malkef on Nov. 6. Jade Sacker for Foreign Policy

Malkef has already changed dramatically since Shlo left. By two days after her flight, the small village was already just a mile from the front line. SDF fighters, dressed in civilian clothing to avoid targeting by drones, were the village’s main occupants. Tire fires burned, obscuring the skyline. One afternoon, a shell struck a home. According to local SDF members stationed in the village, two children were killed and seven civilians wounded. All this despite the fact that, officially, there is no conflict. On Oct. 22, Russia brokered a cease-fire deal with Turkey to stop their advancing army. Yet the fighting hasn’t stopped.

“Talk of peace agreements were never a reality on the ground,” said one SDF soldier who asked only to be identified as Agir. As part of the latest agreement, Turkey had requested a safe zone along parts of its border with northern Syria from which Kurdish forces would be cleared. SDF fighters believe that Tal Tamr, a city that was never included in the safe zone, is now a target. “One moment everything can seem fine,” the soldier said, “but the next it could be hell on earth.” It’s unclear how much control Turkey now has over the Turkish-backed Free Syrian Army, but those on the ground speculate that the fighters are motivated to seize the city for the purposes of looting and pillaging. 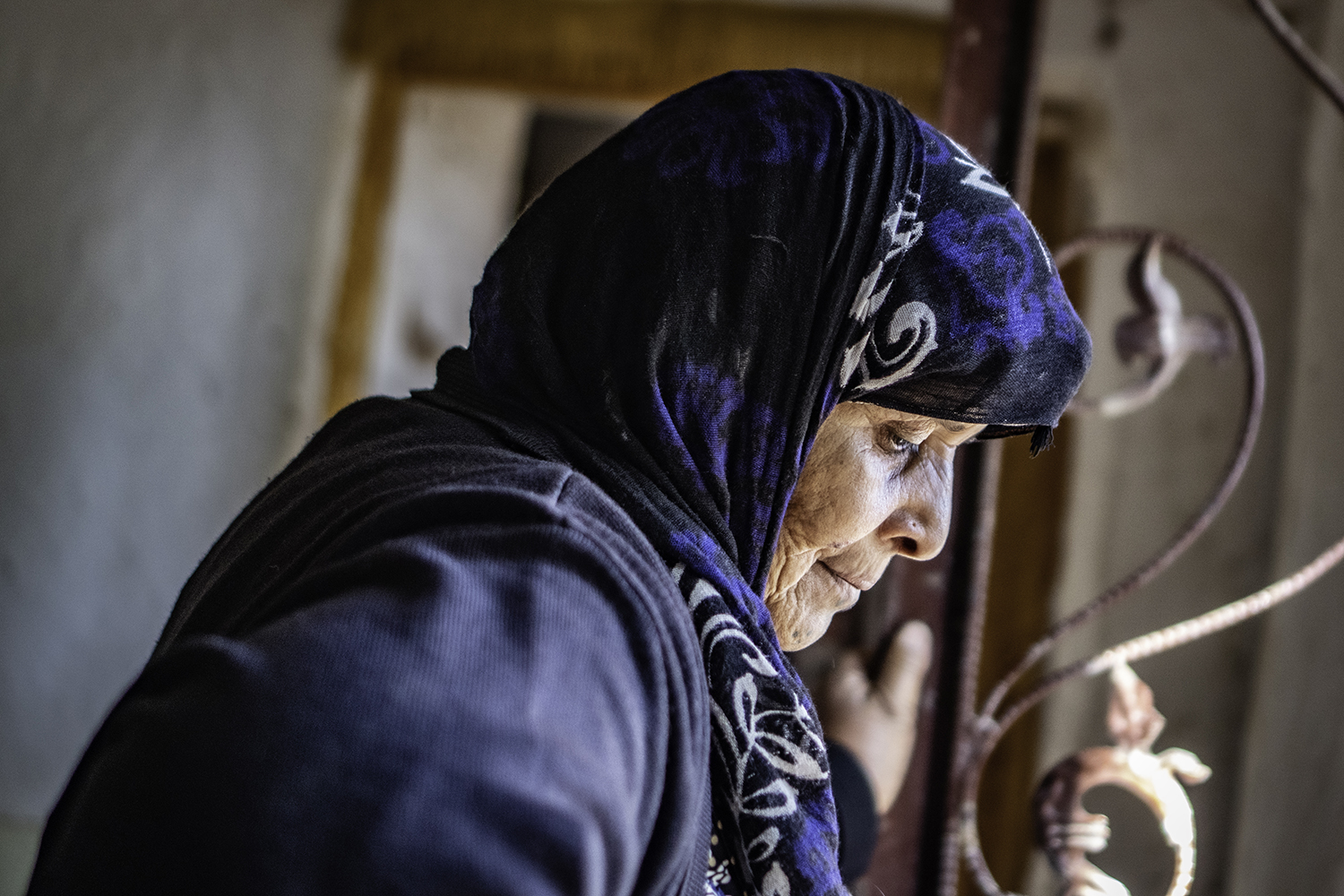 Yezi Hassan, Fatima Shlo’s mother, stands in front of her home in Malkef on Nov. 6. 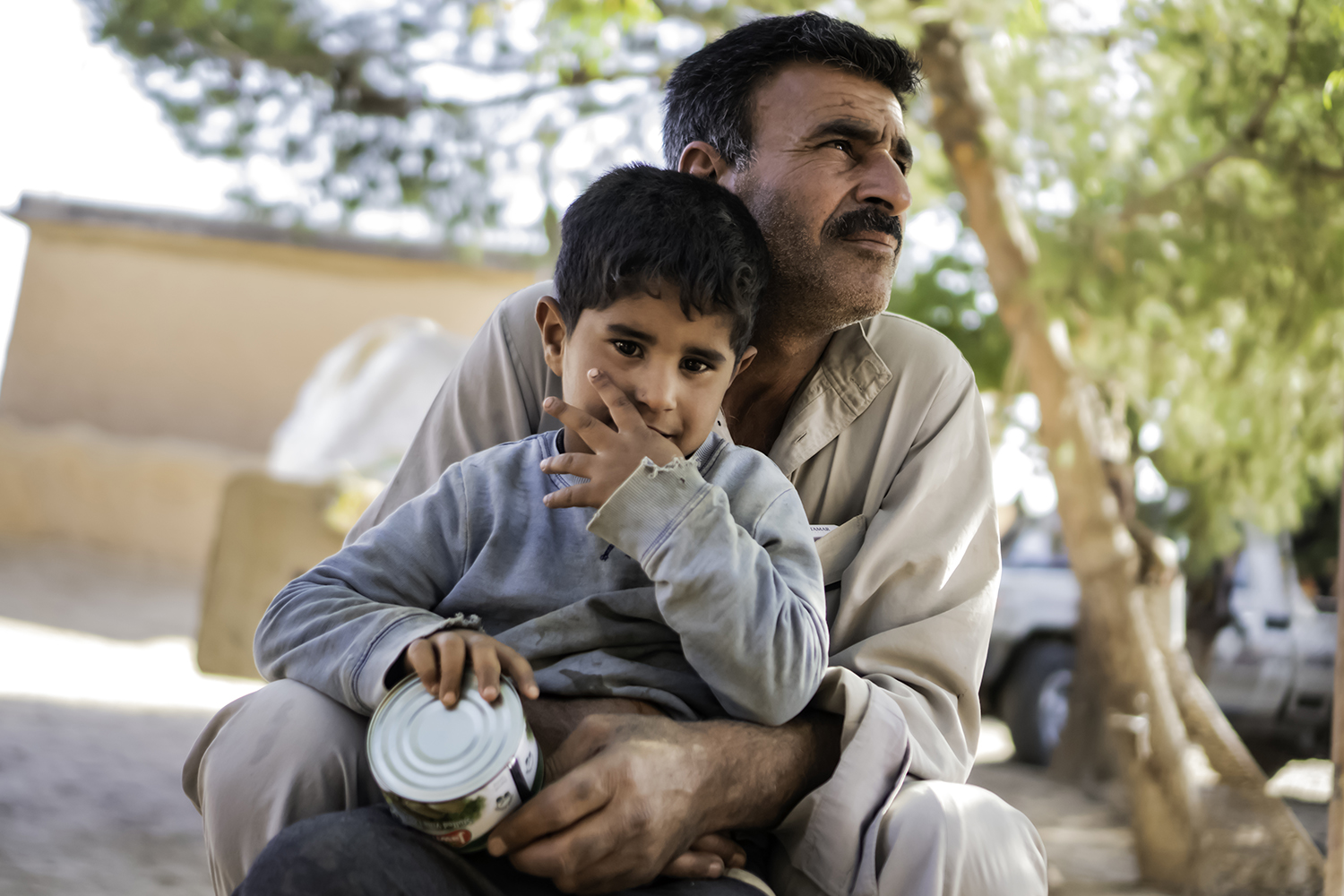 Fatima Shlo’s husband, Jaseem, holds their son in Malkef on Nov. 6. The sounds of shelling and airstrikes scare his children, who had experienced years of peace since the Syrian Democratic Forces ousted the Islamic State from the area. Jade Sacker for Foreign Policy 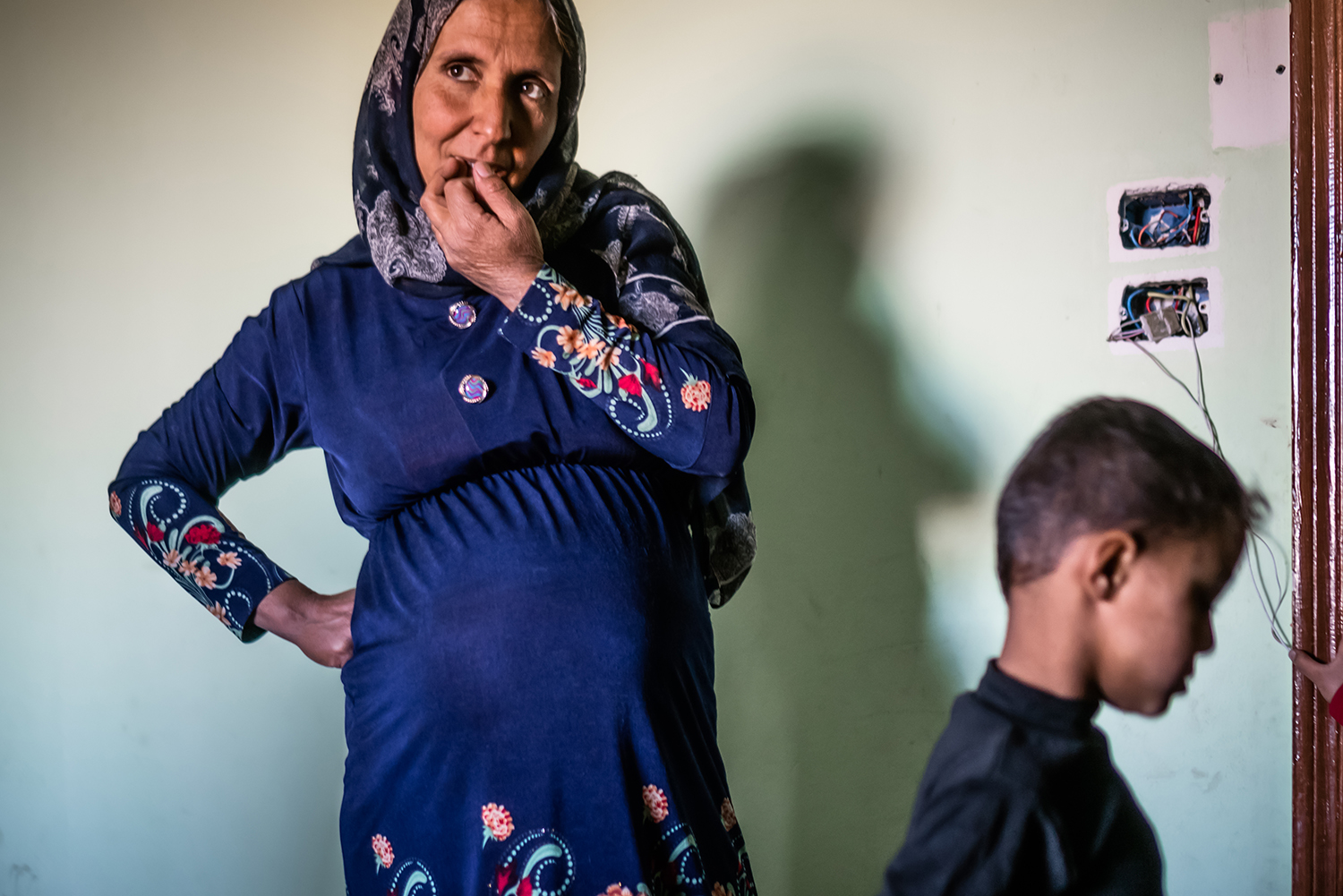 Shalla in Am Albaloa on Nov. 7. Jade Sacker for Foreign Policy

Fatima Khode al-Shalla, 36, did not know where her children would sleep the night they left Malkef. She eventually found refuge in a Christian village, Am Albaloa, that was abandoned during Islamic State rule four years ago. The homes have no running water or electricity. Most lack furniture, too, and even doors and windows. Her family of seven is holed up in a single room. Her children, who no longer have access to schooling, spend most of their days inside. As of early November, there were more than 80 refugee families living in Am Albaloa. Local officials have taken tallies of families, yet no aid has been provided. The refugees say they’ve resorted to drinking the water from a nearby river, which they say has made some sick. “Life here is not life,” said Shalla, who’s expecting another child. She said if she has a boy she’ll name him Harb, meaning “War.” 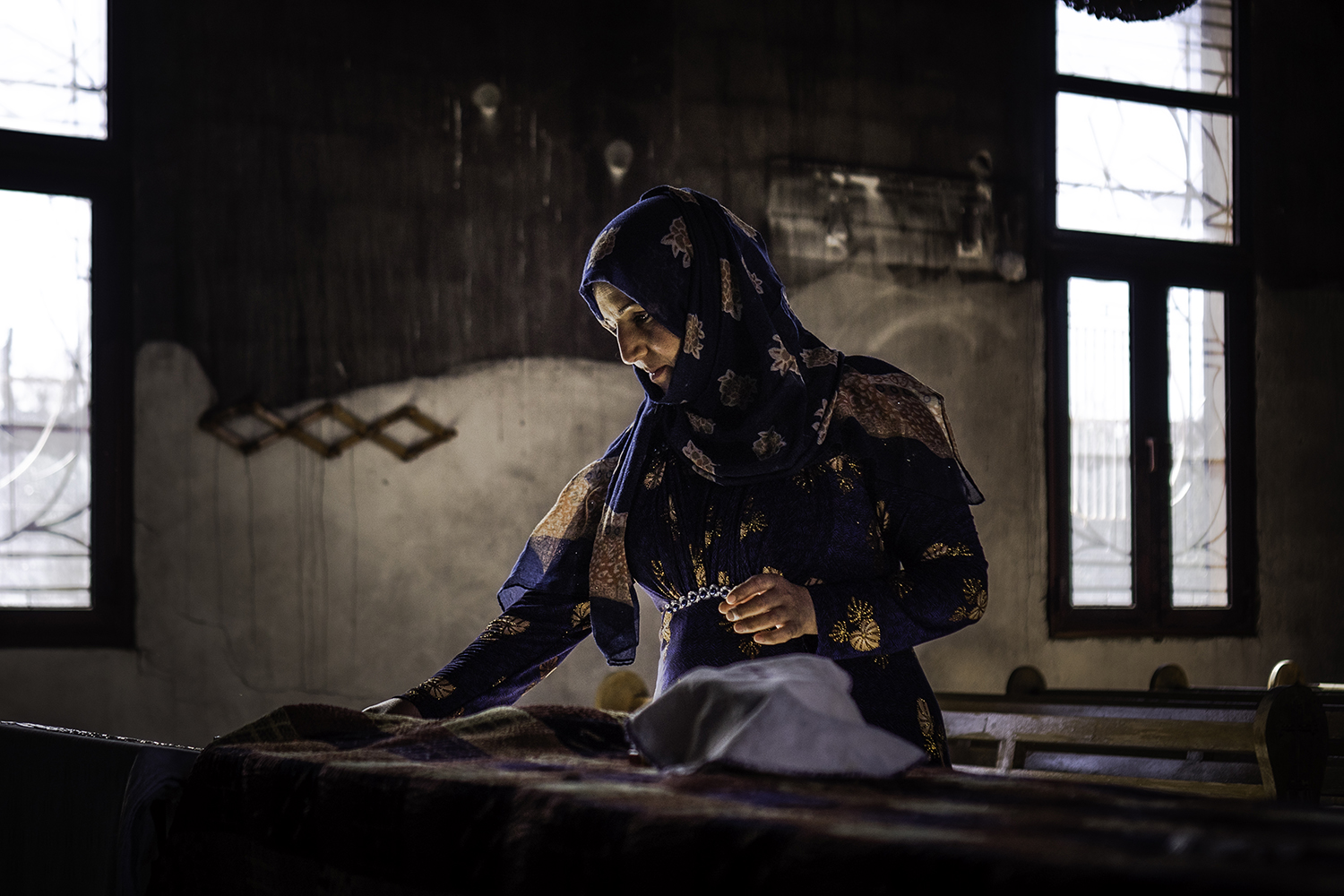 A Muslim woman from Serekani visits a burned church in Am Albaloa, where she has found refuge, on Nov. 9. 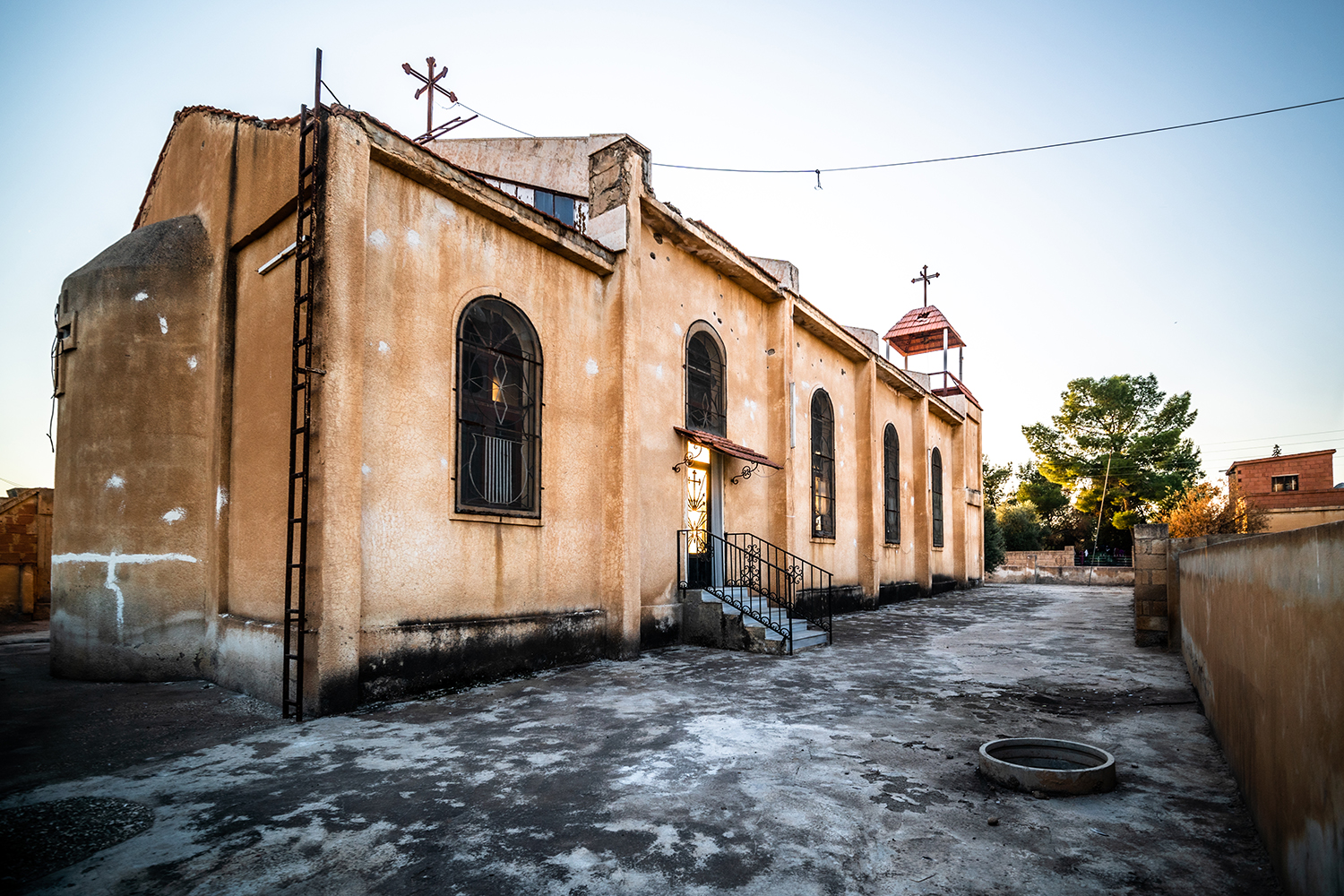 The church in Am Albaloa, a Christian village that has become a refuge to largely Kurdish Muslims fleeing violence. Jade Sacker for Foreign Policy

Salem Awyed, 50, relocated his family to another deserted Christian village called Tal Hafyan. They live with two other families—25 people in total—in a three-room home scarred from combat. Despite a lack of clean water and food, he said his greatest fear is more war. His children are traumatized by the sounds of violence. 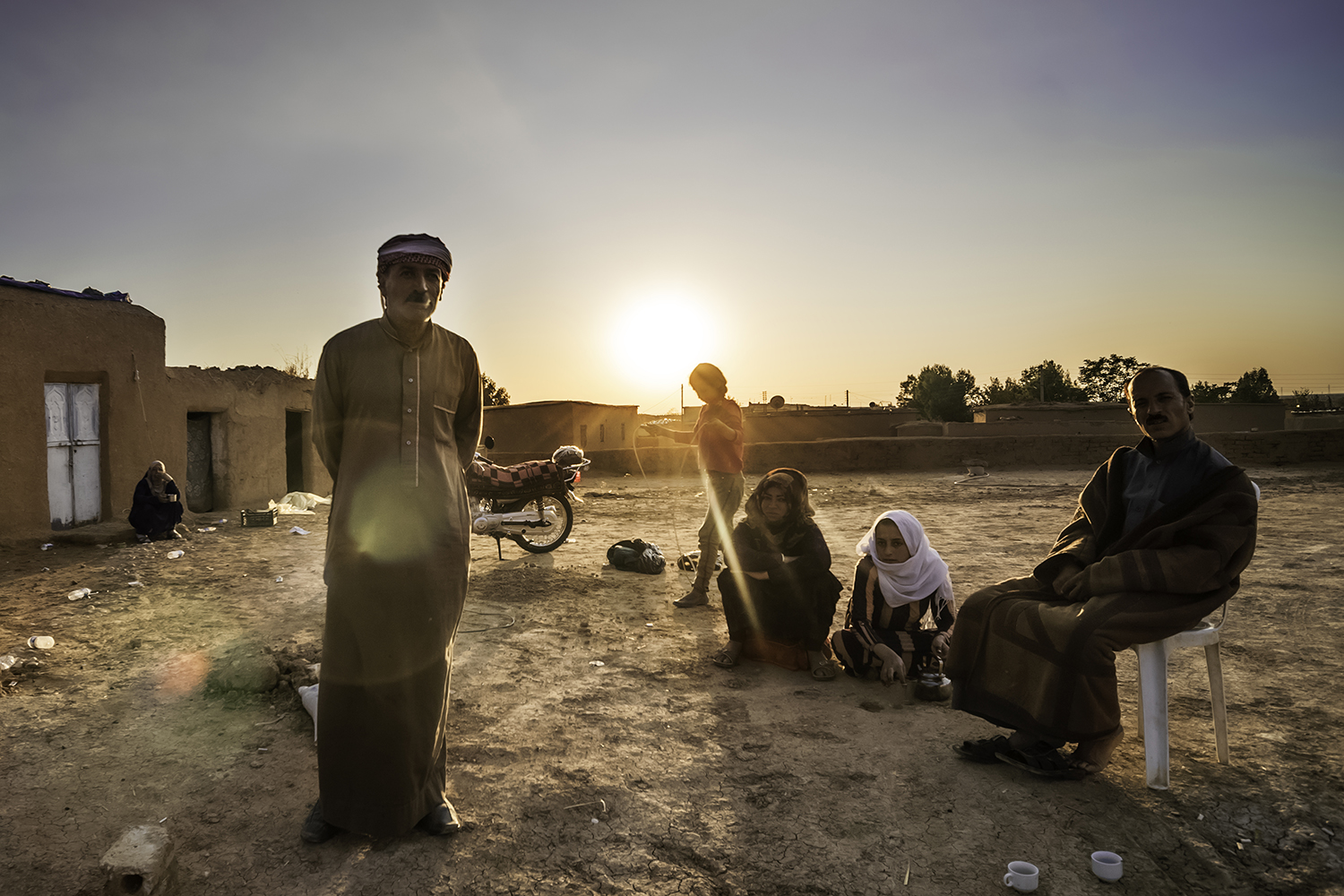 Salem Awyed, 50, and his family sit outside their now empty home in Malkef on Nov. 6. Despite a cease-fire deal brokered between Russia and Turkey, fighting has raged near the village, and locals fear it could fall at any time. Jade Sacker for Foreign Policy 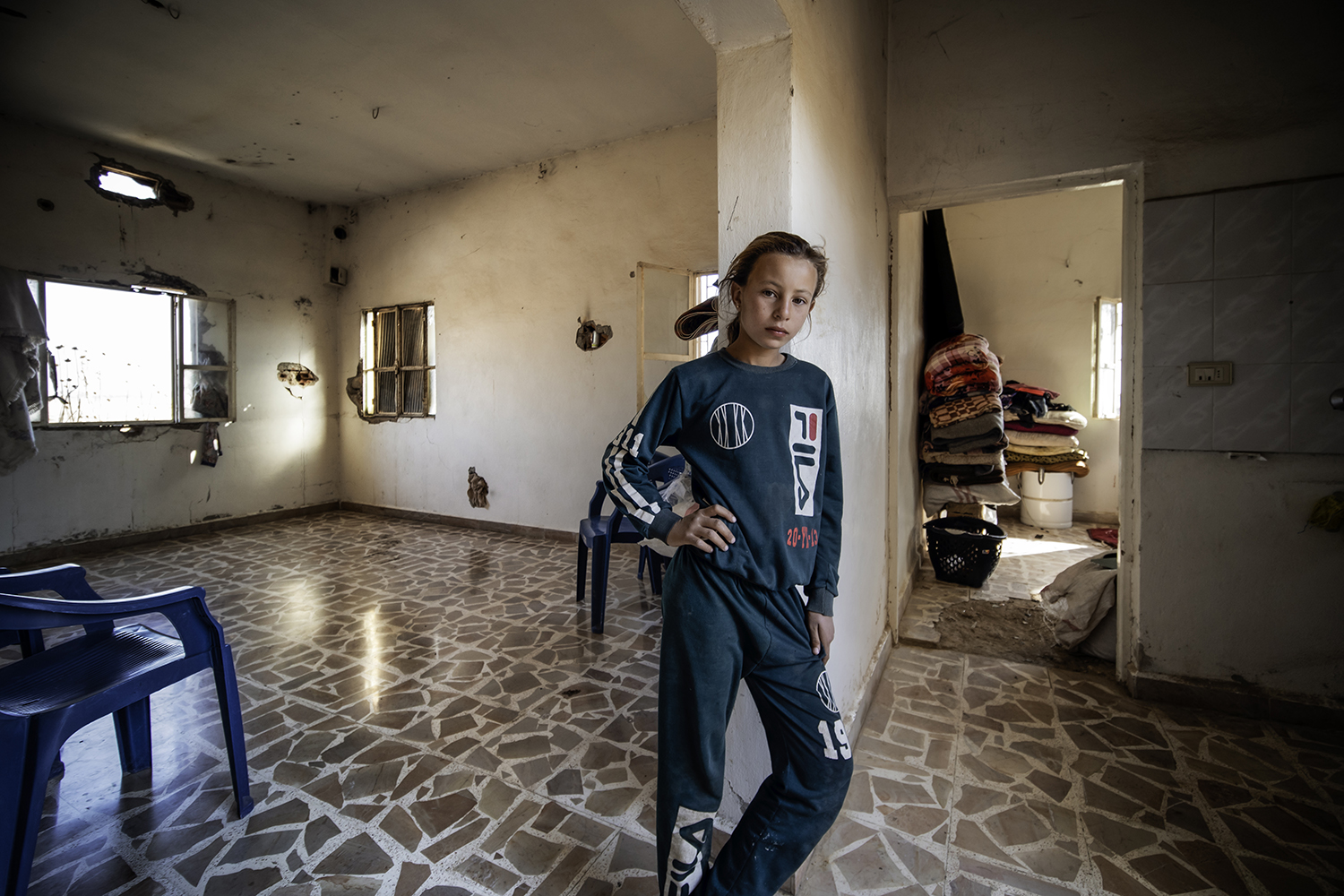 Salem Awyed’s 12-year-old daughter stands in her family’s new home in the historically Christian village of Tal Hafyan, abandoned during Islamic State rule, on Nov. 9. Most houses show signs of the heavy fighting between Syrian Democratic Forces and the Islamic State. Jade Sacker for Foreign Policy

Meanwhile, there is daily shelling and airstrikes on the villages around Tal Tamr and along other fronts of Turkey’s paused invasion. It’s unclear if the Turkish-backed Free Syrian Army will continue its advance, but Syrians are preparing for the worst. Most refugees have no access to aid, nor the financial means or connections to immigrate to another country. They restlessly wait for the bitter winter and hope for a chance to return to their homes.

In spite of the danger from unremitting bombs, Awyed returns each day to his former home in Malkef, sitting listlessly between his russet house and the sparse olive trees surrounding it. “I love my home,” Awyed said, unwilling to abandon the meager land and belongings his family possesses. He’ll spend his day there, without his family, as the echoes of shelling crackle nearby. 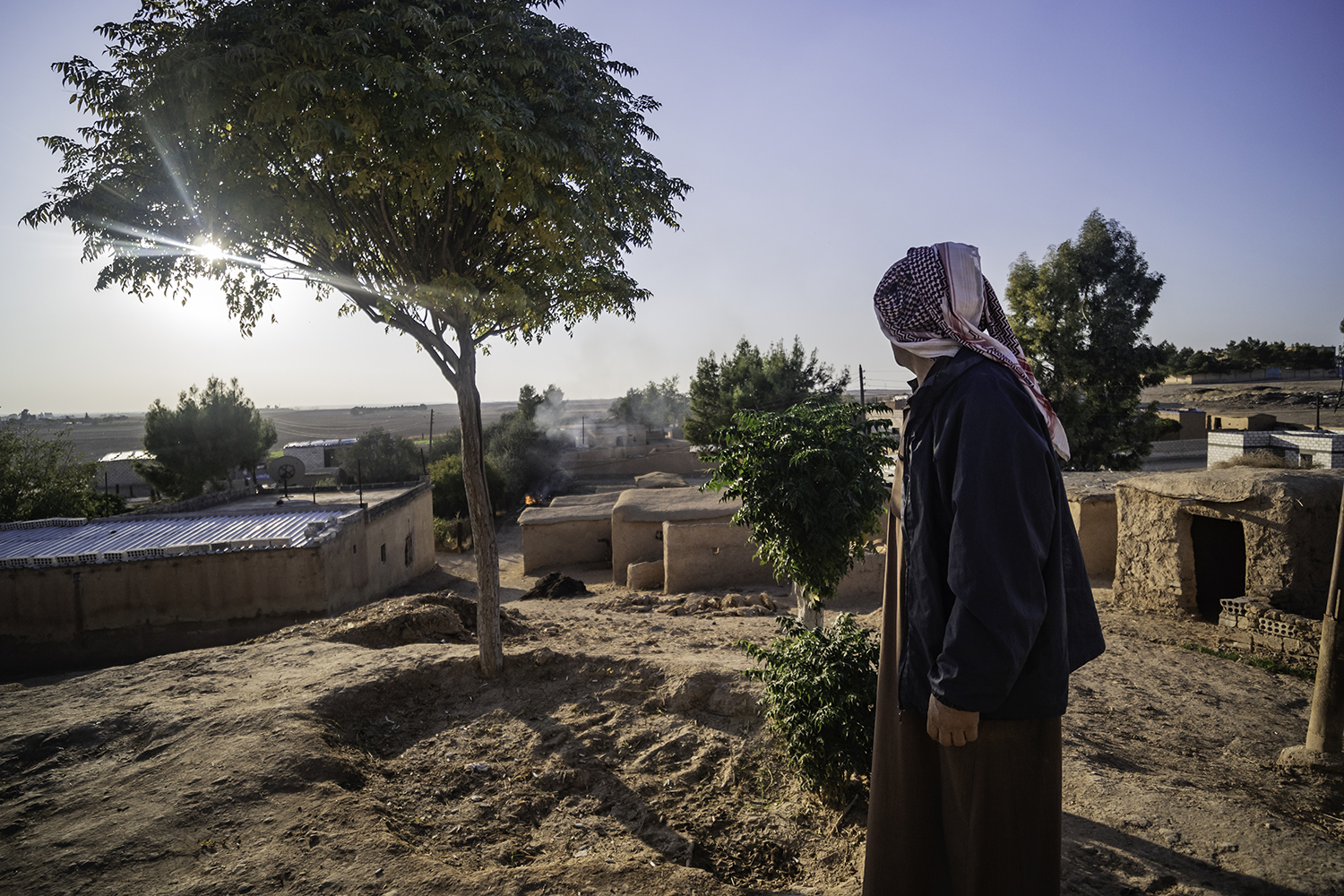 A villager looks at the impact of a shell that reportedly wounded seven civilians and killed two children an hour earlier in Malkef on Nov. 10. Jade Sacker for Foreign Policy

Jade Sacker is a photojournalist based in New York City.