New rules force companies to give up their privacy and steer clear of social networks and Wi-Fi if they want their internet back. Regular citizens still have no access, 113 days into a digital blackout.

Welcome to Foreign Policy’s weekly South Asia Brief. The highlights this week: An extremely limited rollback of Kashmir’s internet ban, a cabinet shuffle in Nepal, an Afghan prisoner swap, and another divestment drive in India.

Welcome to Foreign Policy’s weekly South Asia Brief. The highlights this week: An extremely limited rollback of Kashmir’s internet ban, a cabinet shuffle in Nepal, an Afghan prisoner swap, and another divestment drive in India.

India has begun to restore internet connections for businesses in Kashmir but with strict conditions. According to the Wire, which obtained a copy of a bond that more than 80 local businesses have signed so far, internet is being restored only if signatories commit to using it “for business purposes only” and pledge to keep users away from social networking sites, proxies, virtual private networks, and Wi-Fi. The bond bars users from uploading encrypted videos or photos and makes companies responsible for “any kind of breach or misuse.” It is unclear what exactly would constitute a breach or misuse, which will likely allow authorities to interpret those terms broadly. Signatories also waive their right to privacy, providing “complete access … as and when required by security agencies.”

There we have it. One hundred and thirteen days since Aug. 5, when New Delhi rolled back the autonomy of the Jammu and Kashmir region after cutting off access to internet there—paralyzing businesses, commerce, education, health care, and everyday life—a greatly curtailed version of the web is being given to businesses that are willing to sign away their freedoms. And while mobile and landline services have been gradually restored, internet services for the public remain suspended. At an Indian Supreme Court hearing on Tuesday, the government defended its blockade, calling it “justified to prevent terror acts on [the] dark web.”

Open or closed? While the last decade has seen an immense growth in the number of internet users in India, from 100 million in 2010 to an estimated 600 million this year, a big question for the next 10 years is whether the internet that Indians will experience will be open or closed. On the one hand, India has made important progressive moves on internet freedom, not least the fact that it has adopted rules guaranteeing net neutrality—the principle that prevents internet providers from granting favorable access to any particular app or site. The country’s Supreme Court has also ruled that privacy is a “fundamental right.”

But as Freedom House’s annual Freedom on the Net report shows, internet freedom has been declining in India: The government has proposed guidelines that would undermine encryption and has arrested journalists and politicians for their social media posts. The greatest example of overreach, however, continues to be New Delhi’s propensity to shut down the internet to maintain public order. Supporters of these moves liken shutting down the internet to the police cordoning off a section of a highway in the event of a car accident. But while the instinct of protecting law and order is an important one, there are no checks and balances in the process. Who gets to decide when the internet is shut down? What are the criteria? If shutdowns are misused to suppress particular groups or communities, how are the authorities held accountable? How India answers these questions will determine whether its internet economy will be free and fair in the coming years.

As the chart below shows, from 2016 to 2018, India shut down the internet more than any other country—by far. 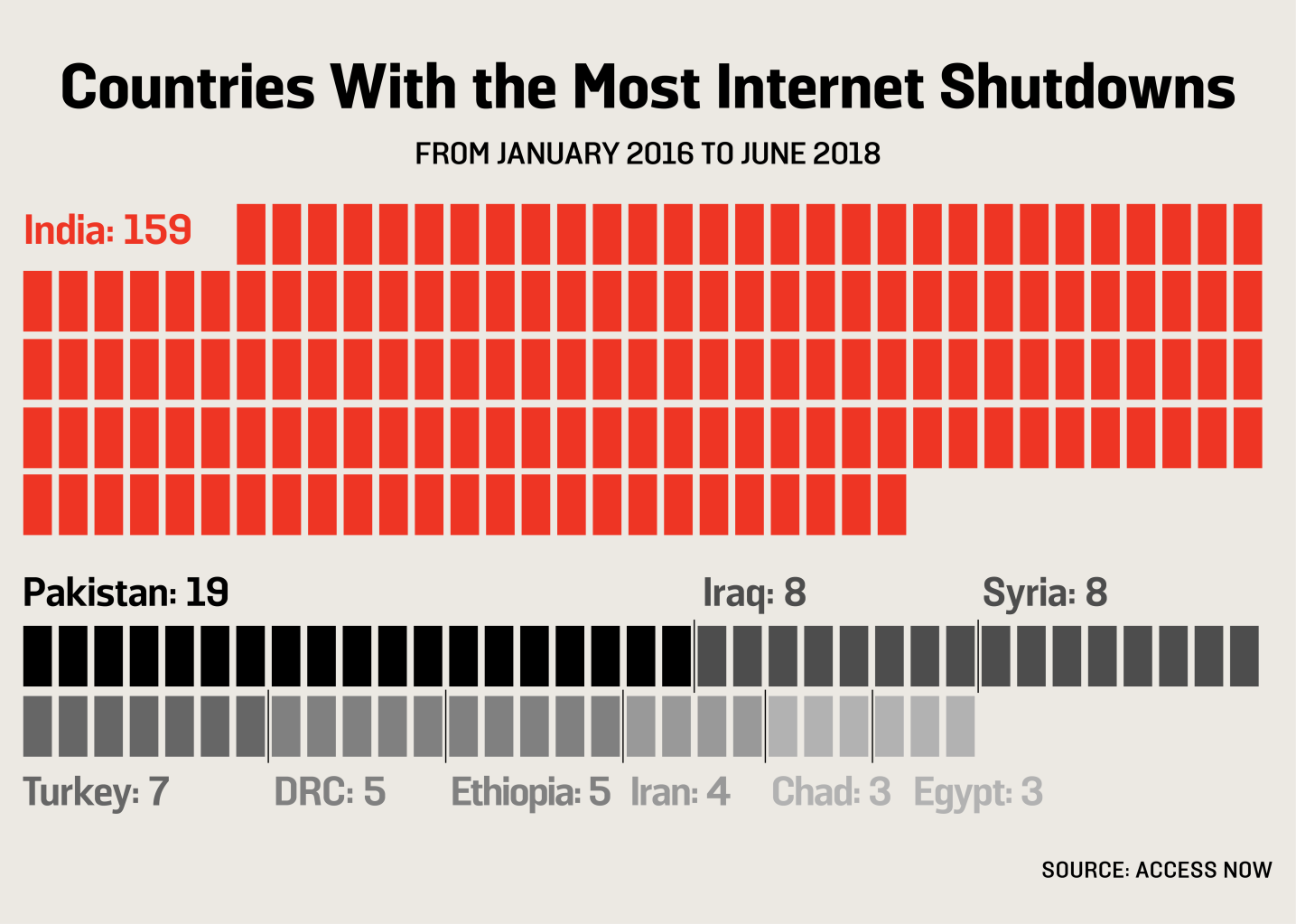 Rajapaksa-land. Newly elected Sri Lankan President Gotabaya Rajapaksa has sworn in his brother, former President Mahinda Rajapaksa, as prime minister. The brothers have worked together before: Gotabaya ran the defense ministry under Mahinda between 2005 and 2015. Two other brothers, Basil and Chamal Rajapaksa, were minister of economic development and speaker of parliament, respectively. Observers fear that the Rajapaksas may crack down on the country’s Muslims, revive ethnonationalism, and harm the country’s democracy.

Do the shuffle. Nepali Prime Minister K.P. Sharma Oli replaced six members of his cabinet in a bid to strengthen his position. On Thursday, in what many saw as a gift to the Maoists, Oli handed the role of executive chairman of the ruling Nepal Communist Party to former Maoist rebel leader Prachanda. The move may shore up Oli’s standing in his coalition alliance with the Maoists, with whom he joined forces to win the country’s last vote in 2017.

All talk? The Afghan Taliban released two academics—an American and an Australian, held hostage for more than three years—as part of a prisoner swap for three Taliban commanders. “The Taliban have indicated that the release of the two professors is intended as a goodwill gesture, which the United States welcomes,” U.S. Secretary of State Mike Pompeo said in a statement, rekindling hopes that the swap could revive stalled peace talks.

New Delhi’s Jama Masjid—one of the largest mosques in India—may date to the 1650s, but a decidedly more modern addition has popped up out front: a sign banning TikTok, the popular Chinese video platform, from the premises. 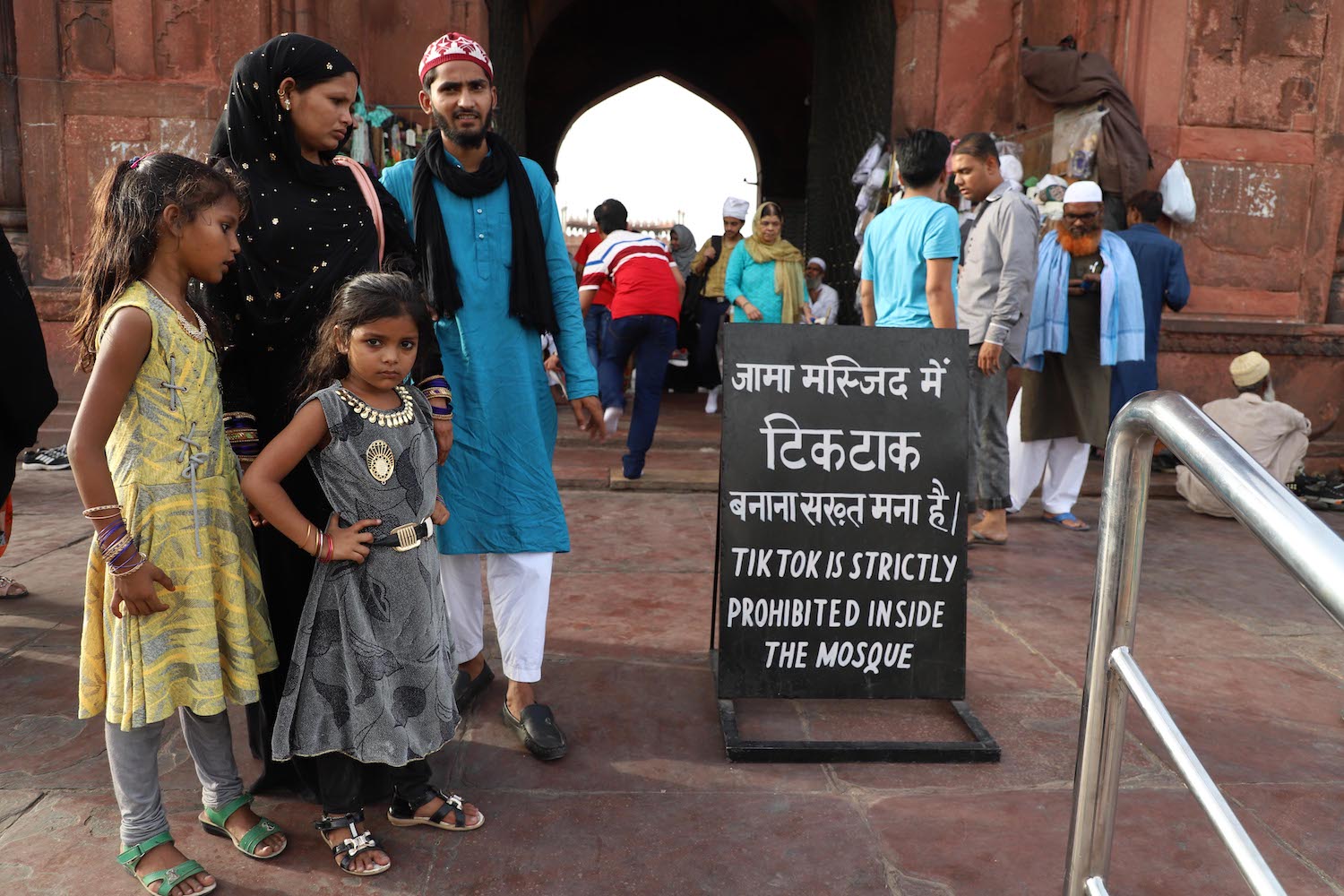 A sign outside Jama Masjid in New Delhi on June 16.Nasir Kachroo/NurPhoto/Getty Images

The caretakers at Jama Masjid clearly believe that too many among the faithful are addicted to the app. And that leads us to our quiz this week: How many Indians use TikTok?

Divestment drive. Indian Finance Minister Nirmala Sitharaman said the government will sell its stakes in iconic state-owned companies such as Bharat Petroleum—the country’s sixth-largest company by revenues—according to the Financial Times. Four other companies in shipping, logistics, and energy have been earmarked for divestment.

Mobile monopoly. The telecom firms Vodafone Idea and Bharti Airtel owe the government as much as $5.8 billion in dues for purchases of spectrum licenses but have now been given a two-year deferment to repay those amounts. The reprieve is particularly important because it will give those companies some time to regroup and compete with the behemoth Reliance Jio—thereby preventing the Mukesh Ambani-led group from gaining a monopoly on the crucial sector.

Ready for free trade? As we’ve reported in this newsletter, India pulled out of a massive regional trade deal last month and attracted criticism for doing so. Here’s an argument defending New Delhi’s stance. As Harsh V. Pant and Nandini Sarma argued in Foreign Policy, India’s trade deficits mean that it wasn’t ready for the Regional Comprehensive Economic Partnership—at least not while it is witnessing slowing growth and a lack of demand.

Big ideas. Western political thought comes with its own familiar canon and syllabus, but India has long lacked an equivalent. One scholar, Rahul Sagar, an associate professor of political science at New York University Abu Dhabi, is trying to correct that. In his new database, “Ideas of India,” he has gathered hundreds of thousands of articles to create a database of the country’s political and intellectual history. “No one who reads these periodicals,” he writes in the site’s introduction, “can fail to comprehend the immense struggle—intellectual, moral, political, and social—that it took to realize India.” Check it out here.

Salt wars. India and Pakistan have added another item to their long list of disputes: Himalayan pink salt, which is prized in the West for its purported health benefits. Although most of it comes from Pakistan, according to NPR, that origin has rarely been highlighted—until now. This year, a story on social media that India had been importing the salt from its neighbor and then exporting it as “made in India” went viral, sparking debates in Pakistan’s parliament, countless newspaper articles, and much discussion on social media. Now there are moves to trademark the salt as Pakistani.

Although Facebook still has 300 million users, according to the Economic Times, TikTok overtook the older social media platform to become the most downloaded in the first quarter of 2019.