China and the United States both increased emissions last year; a U.N. report shows 1.5 percent growth in emissions per year since 2009.

Here is today’s Foreign Policy  brief: The United Nations issues stark warning on greenhouse gas emissions, a French helicopter crash in Mali kills 13, the country's largest military loss in decades, and Malta's government is rocked by high-level resignations two years after the assassination of a journalist investigating corruption. Audrey Wilson, Foreign Policy’s newsletter editor, is away today, so I’ll be standing in.

Please note that Morning Brief will be taking a break for the U.S. Thanksgiving holiday on Thursday, Nov. 28 and Friday, Nov. 29. We'll be back on Monday, Dec. 2.

Here is today’s Foreign Policy  brief: The United Nations issues stark warning on greenhouse gas emissions, a French helicopter crash in Mali kills 13, the country’s largest military loss in decades, and Malta’s government is rocked by high-level resignations two years after the assassination of a journalist investigating corruption. Audrey Wilson, Foreign Policy’s newsletter editor, is away today, so I’ll be standing in.

Please note that Morning Brief will be taking a break for the U.S. Thanksgiving holiday on Thursday, Nov. 28 and Friday, Nov. 29. We’ll be back on Monday, Dec. 2.

A new United Nations report calls for “deeper and faster cuts” in carbon emissions as it notes that global greenhouse gas emissions have increased 1.5 percent each year over the past ten years.

Inger Andersen, the executive director of the United Nations Environment Programme, was blunt in her assessment, “This report gives us a stark choice: set in motion the radical transformations we need now, or face the consequences of a planet radically altered by climate change,” she wrote in the report. The warning comes as torrential rains caused mudslides and flooding in Europe and Africa, leading to multiple deaths in recent days.

It’s not all bleak, however. An analysis of global energy consumption published by Carbon Brief shows coal-fired power production is projected to fall 3 percent this year—the largest annual decline ever recorded. The rapid deceleration of growth in China and India is responsible for this year’s drop. As FP’s C.K. Hickey illustrates, the decline in coal comes as generation from wind power has dramatically increased. 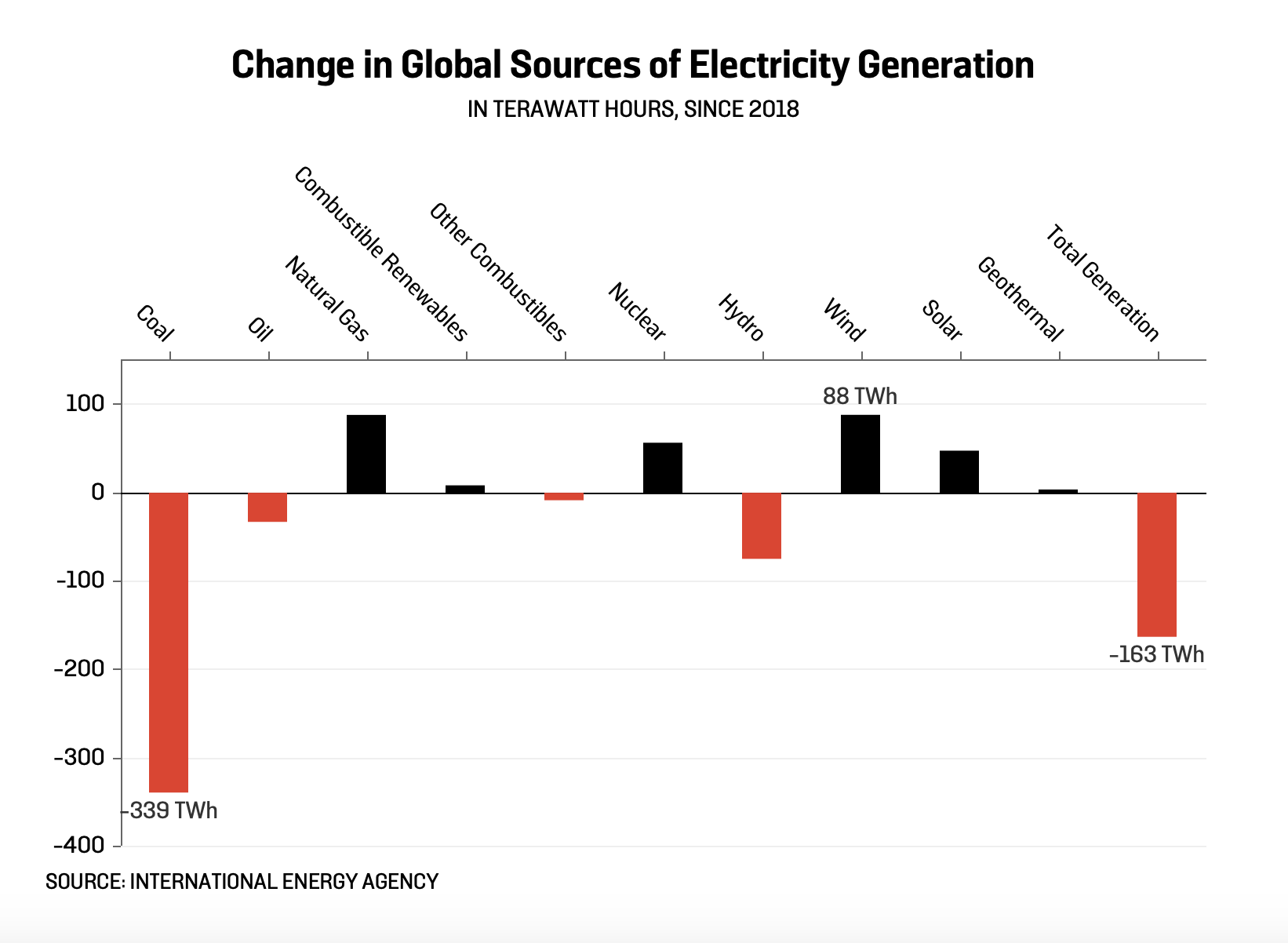 French helicopter crash in Mali. France suffered its largest military loss of life since 1983 yesterday, when two helicopters collided during a mission supporting French ground troops in Mali’s Liptako region, killing 13 soldiers. The collision brings the French military death toll in Mali to 41 since the country’s 2013 intervention. France’s Defense Minister Florence Parly said an inquiry will be opened into the cause of the incident.

An earthquake in Albania. An earthquake measuring 6.4 on the Richter Scale killed 21 people and injured more than 600 on Tuesday morning. The epicenter was 19 miles west of the capital, Tirana, where several buildings collapsed. The Albanian government reports that 28 people have been rescued from the rubble.

Protests in Colombia. Colombian students and labor unions will continue their protests today against President Iván Duque’s tax reform after talks between the government and a protester steering committee broke down yesterday. Demonstrations in the past week have brought tens of thousands of Colombians to the streets and have already forced Duque to make changes to his proposals.

Bombings in Baghdad. Three simultaneous explosions in Iraq’s capital killed five people on Tuesday in the first attack of its kind since anti-government protests began. The attacks occurred far from Tahrir Square, which has become the center of demonstrations in recent weeks. The violence comes as General Mark Milley arrives in the country in his first visit to the Middle East since taking on the role of Chairman of the U.S. Joint Chiefs of Staff.

The political fallout of a murder in Malta. An investigation into the 2017 murder of the crusading Maltese journalist Daphne Caruana Galizia has, after two years, started to impact high-level government officials. Prime Minister Joseph Muscat’s chief of staff and two ministers abruptly stepped down on Tuesday in the wake of several arrests in the hunt for those behind the killing of Caruana Galizia. Chief of Staff Keith Schembri, Tourism Minister Konrad Mizzi, and Economy Minister Chris Cardona all resigned but have denied wrongdoing.

Four years ago, Caruana Galizia used the leaked Panama Papers to show that Schembri and Mizzi had benefited from Panamanian shell companies shortly after assuming office. Muscat has so far refused to step down himself, though he has declared “I would definitely resign if there is any sort of association between myself and the murder.”

Lebanon’s new leadership. Lebanese President Michel Aoun will consult with members of parliament on Thursday in order to choose a new prime minister, Reuters reports. The country has been politically adrift since Saad al-Hariri resigned last month during protests that have rocked the country. Hariri has remained in a caretaker capacity but announced Tuesday that he would withdraw his candidacy for the premiership.

NATO Spending. NATO members are racing to sign off on a spending deal that would relieve some of the burden on the United States in what is seen as a political gesture ahead of the bloc’s 70th anniversary summit in London next week. French President Emmanuel Macron, who said that NATO was “suffering brain death” earlier in the month, plans to abstain from any vote on the proposal.

China at the U.N. China is angling for the top job at the United Nations’ World Intellectual Property Organization, responsible for setting international standards for patents, trademarks, and copyrights. “Given China’s long track record of corporate espionage, rampant IP theft, and support for U.S. enemies, many trade experts are wary, to say the least,” FP’s Colum Lynch writes.

FP Event—Join Foreign Policy’s Food Forever Solutions Summit, our inaugural food security event, on Dec. 3 in Washington. We’ll discuss the most pressing issues facing our global food system, including biodiversity, agricultural innovation, and sustainable business models for a changing world. It will conclude with a culinary challenge where top DC chefs will share delicious dishes using unusual ingredients for you to sample.

Ireland’s parliament is embroiled in scandal over the purchase of a new $890,000 printer that failed an important user test: it couldn’t fit in the building. The Guardian reports that costs only increased as the printer had to be housed at a storage facility while additional construction work enlarged an entrance. The printer is now in place, but its use is now being held up by a labor dispute over its operation. Legislative employees are demanding training and a raise before using it.