The rival gangs MS-13 and La 18 control or influence every facet of life in El Salvador, making the small Central American nation the world’s most dangerous place outside a war zone.

El Salvador is widely regarded as the deadliest place on earth that is not a war zone, but it may as well be one.

The gang culture that has evolved since the end of the 12-year-long civil war in 1992 is unmatched for its brutality and scale of violence. The country’s defense ministry estimates that as many as 500,000 Salvadorans are involved in gangs—in a country of 6.5 million—either through direct participation or through coercion and extortion by relatives, amounting to 8 percent of the population.

El Salvador’s homicide rate reached over 100 murders per 100,000 residents in 2015—giving it the world’s highest rate that year. Almost all the murders in El Salvador over the past two decades have been connected in some way to a three-way gang war among members of the two largest gangs, Mara Salvatrucha (MS-13) and Barrio 18 (La 18), and government security forces.

El Salvador is widely regarded as the deadliest place on earth that is not a war zone, but it may as well be one.

The gang culture that has evolved since the end of the 12-year-long civil war in 1992 is unmatched for its brutality and scale of violence. The country’s defense ministry estimates that as many as 500,000 Salvadorans are involved in gangs—in a country of 6.5 million—either through direct participation or through coercion and extortion by relatives, amounting to 8 percent of the population.

El Salvador’s homicide rate reached over 100 murders per 100,000 residents in 2015—giving it the world’s highest rate that year. Almost all the murders in El Salvador over the past two decades have been connected in some way to a three-way gang war among members of the two largest gangs, Mara Salvatrucha (MS-13) and Barrio 18 (La 18), and government security forces. 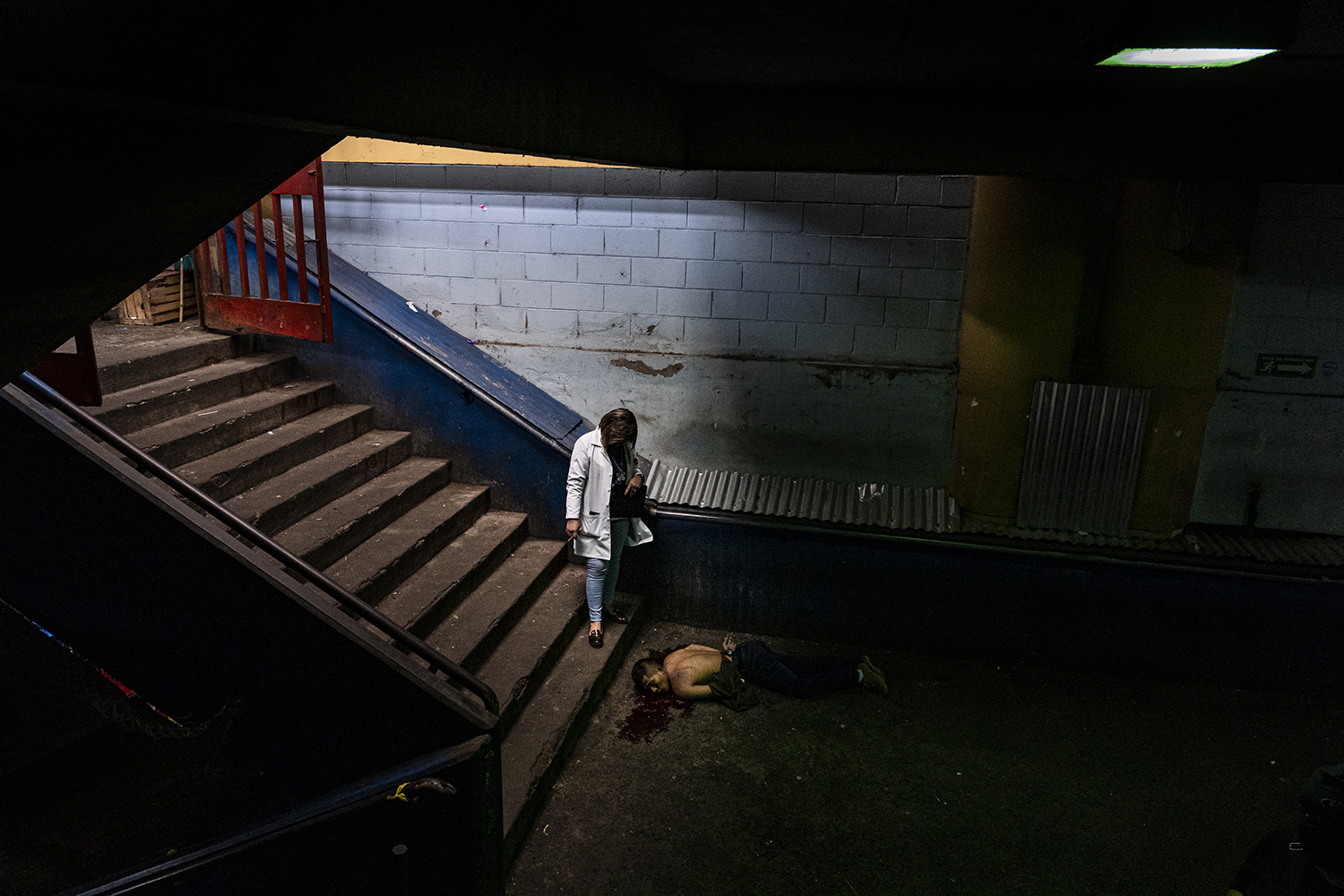 A forensic policewoman stands over a body in one of the busiest places in the capital—the San Salvador Central Market—on Sept. 25. The victim was handcuffed behind his back and shot seven times at around 10:30 in the morning, the National Civil Police reported. Tariq Zaidi for Foreign Policy 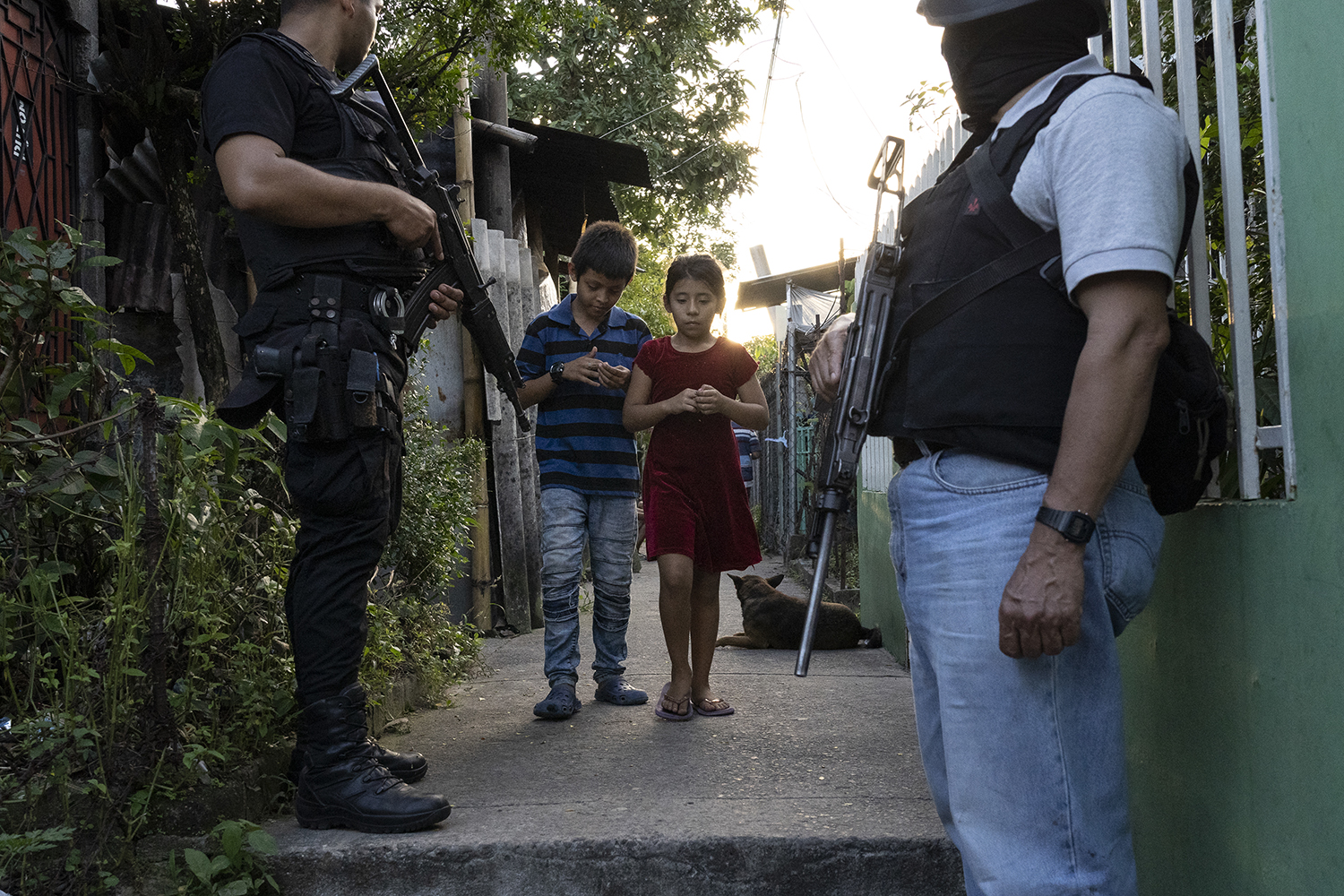 Children who live in a low-income neighborhood controlled by MS-13 pass by a police patrol in San Martín, San Salvador, on Nov. 5, 2018. Tariq Zaidi for Foreign Policy

El Salvador is characterized not only by widespread violence but also by the brutality with which the violence is carried out. After firearms, machetes are the most common murder weapon. Often, the aim is not just to kill, but to torture, maim, and dismember the victim. The emergence of an intricate gang culture with its own traditions, rules, and structures has transformed the act of killing into a ritual, filled with intentional references to sadism and satanism.

Videos and stories of these killings, which usually involve a group of laughing gang members gleefully hacking away at the body parts of a victim and removing organs, have paralyzed Salvadoran society, creating a pervasive atmosphere of fear: Anybody can be an informer for a gang, nobody is safe, any street can become a crime scene, anybody can disappear. Public killings are common, accounting for nearly 40 percent of all murders.

The roots of El Salvador’s current violence lie in the country’s civil war during the 1980s. The war was brutal and exposed many Salvadorans, particularly children, to horrific violence. Many Salvadorans fled to the United States, and in particular to Los Angeles, where Salvadorans teenagers joined together in ethnic solidarity to protect themselves against other established gangs in the city.

Clockwise from top left: Elias, who only gave his first name, is a member of La 18 held at the Penal San Francisco Gótera on Nov. 8, 2018. Detained gang members at the Soyapango police unit in San Bartolo, San Salvador, on Sept. 30. Junior, who only gave his first name, displays his MS tattoo at the Chalatenango Penal Center on Nov. 7, 2018. Inmates crowd a cell at the Penal Center of Quezaltepeque on Nov. 9, 2018. Tariq Zaidi for Foreign Policy 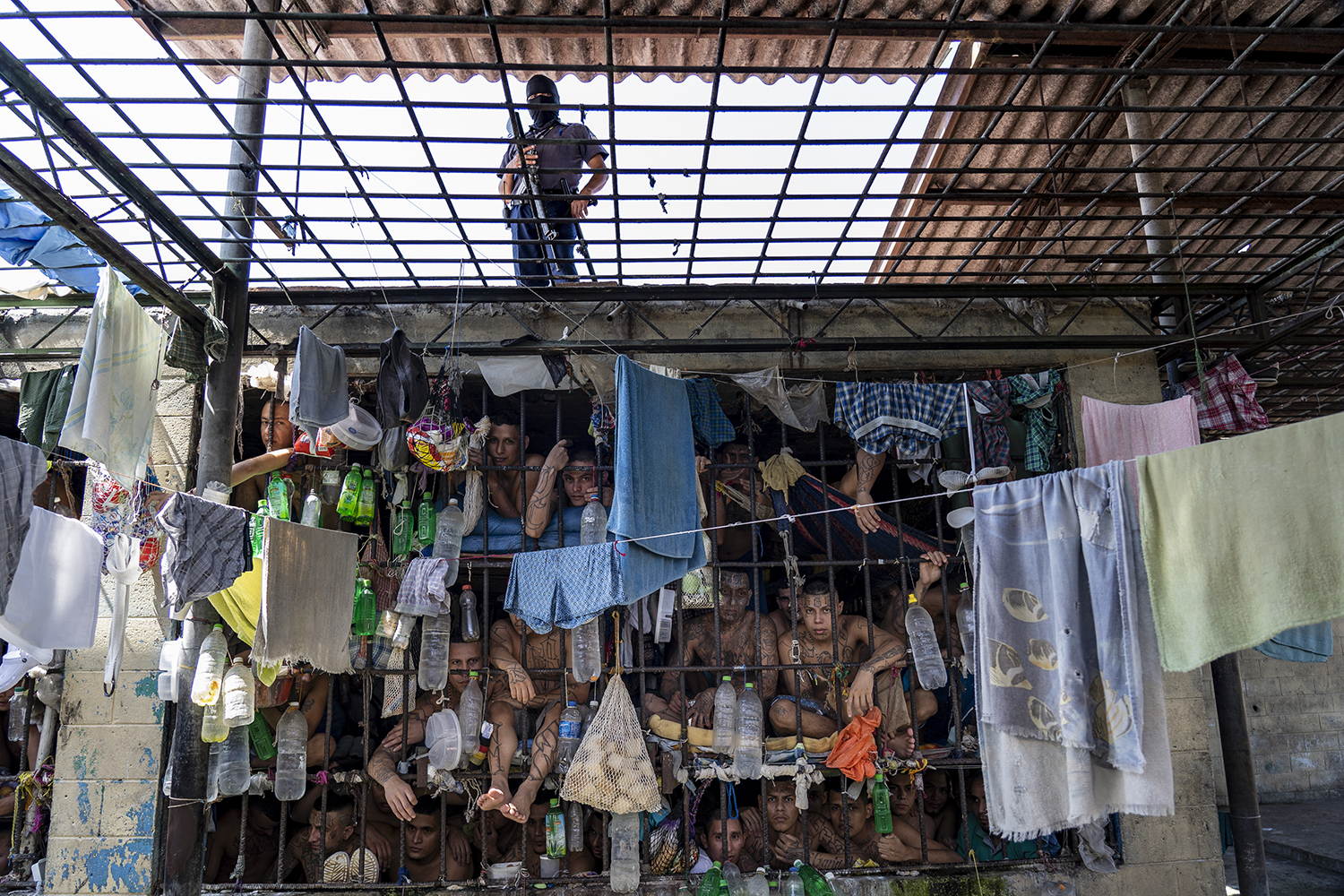 Inmates look out of an overcrowded cell while a prison officer wearing a balaclava to protect his identity stands guard above at the Penal Center of Quezaltepeque on Nov. 5, 2018. Tariq Zaidi for Foreign Policy

Following the end of the civil war in 1992, immigration policies in the United States became more restrictive, and migrants who had been convicted of crimes were sent home, bringing gang culture and violence to an already struggling state.

Today, in many Salvadoran cities, it is impossible to cross the street due to the boundaries of rival gangs’ territory. When entering a new neighborhood by car, visitors often have to flash their lights or roll windows down to indicate allegiance to the gang that controls it—or face violence. 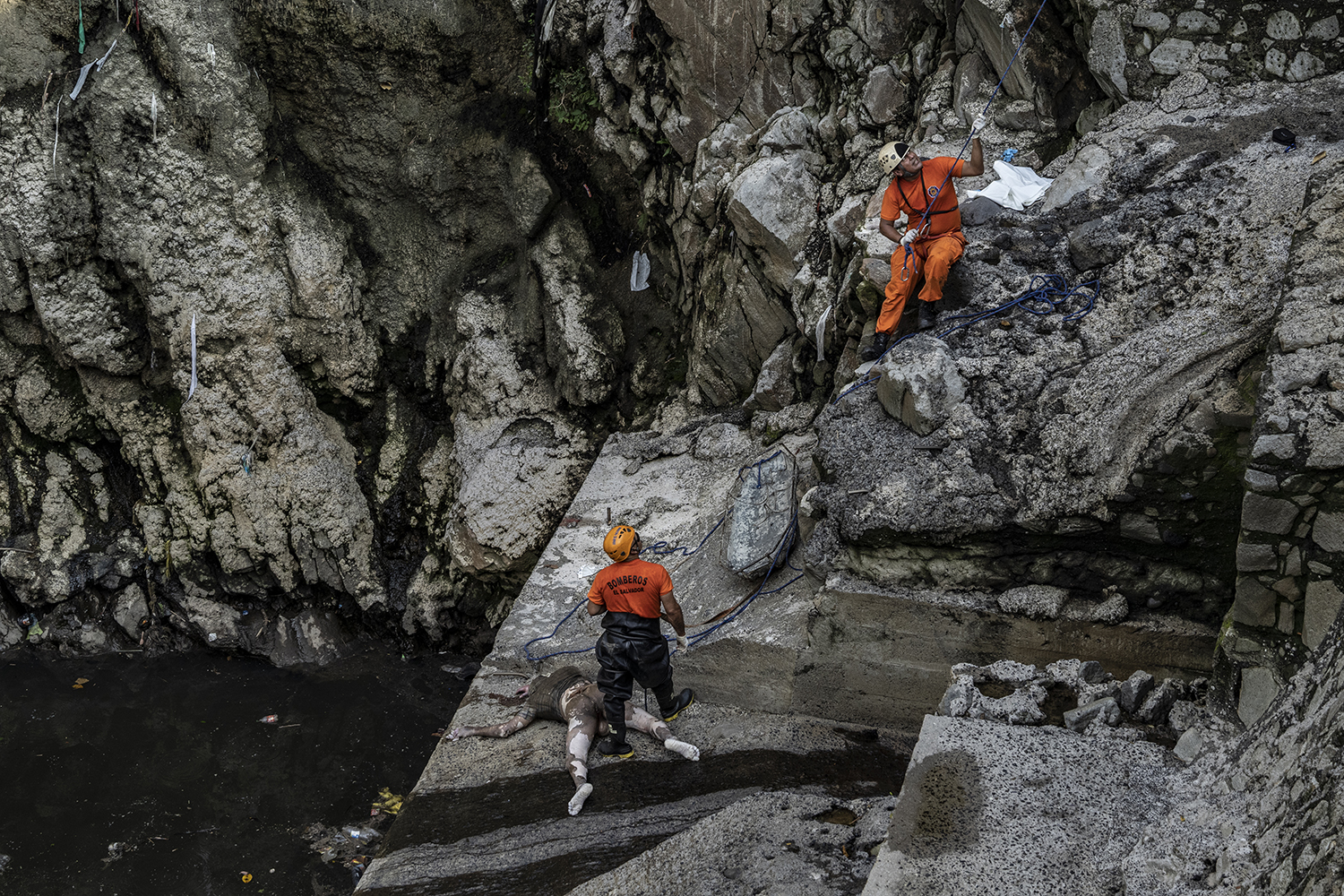 The decomposed body of Byron Stanley Henríquez Funes is pulled out of a river at the dam by Las Mulas Bridge in the municipality of Ciudad Delgado, San Salvador, by emergency personnel on Sept. 24. He had been missing for three days. Tariq Zaidi for Foreign Policy 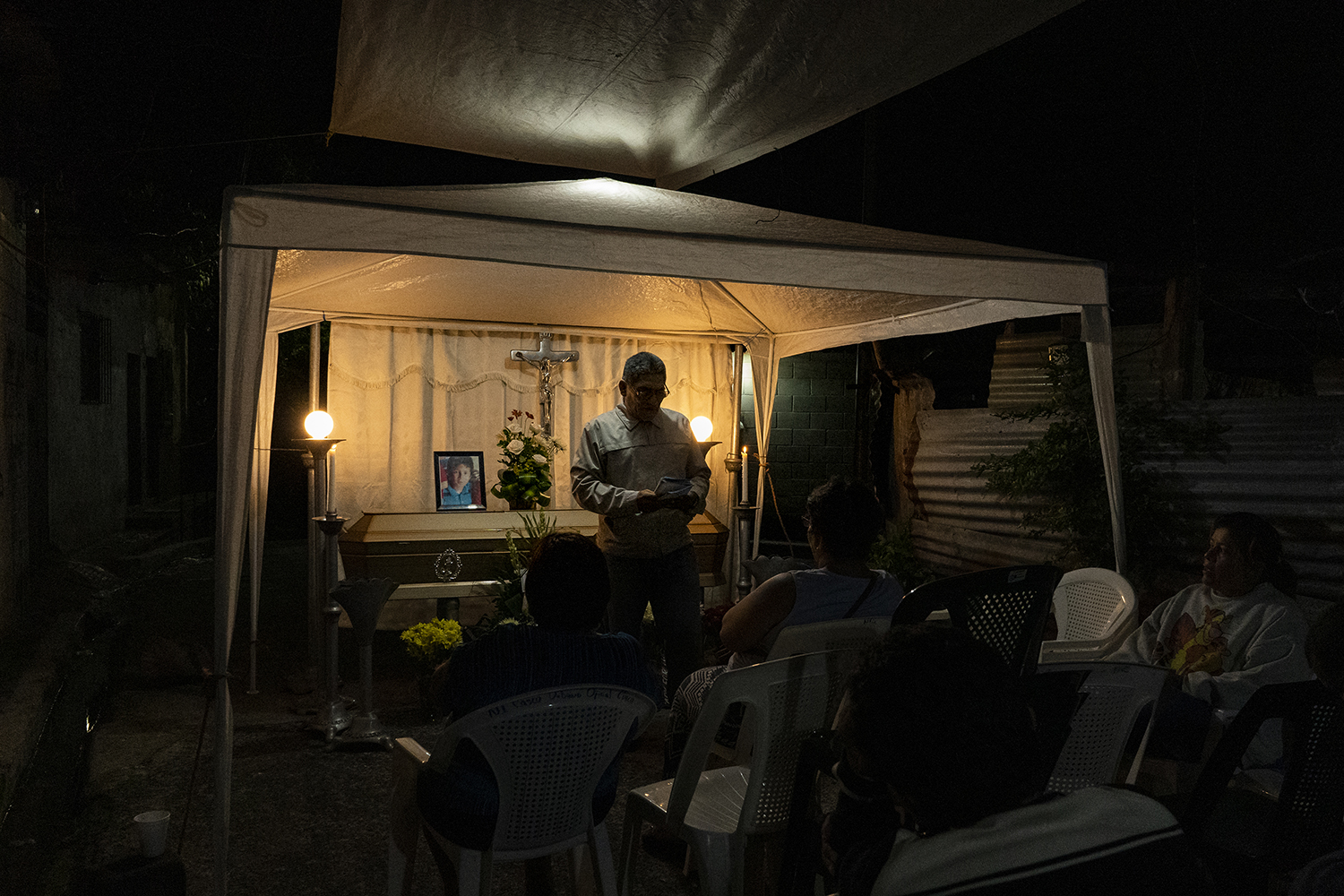 A priest reads from the Bible at the wake for 11-year-old José Luis Peréz Madrid in the Veracruz neighborhood of San Salvador on Nov. 30, 2018. The boy, who the attorney general’s office says was killed in an area dominated by La 18 gang members, played with friends in a park near the demarcation line between the La 18 and MS-13 gangs before they were kidnapped by La 18. His two friends escaped, but José Luis was beaten, tortured, stabbed, and beheaded. At his wake, his family said he loved skateboarding, soccer, and the new President Nayib Bukele. Tariq Zaidi for Foreign Policy

Young people grow up in warlike conditions and are often socialized into the gang, beginning for MS-13 with a 13-second beating. The ubiquity of violence is devastating to regular psychological development—and this violence is normalized. One widely shared video showed a group of gang members cleaving off the hands of a victim and then playing with the fingers, all while laughing hysterically. The knowledge that the perpetrators are most likely sober, as gang rules often prohibit intoxication, makes it even more terrifying. 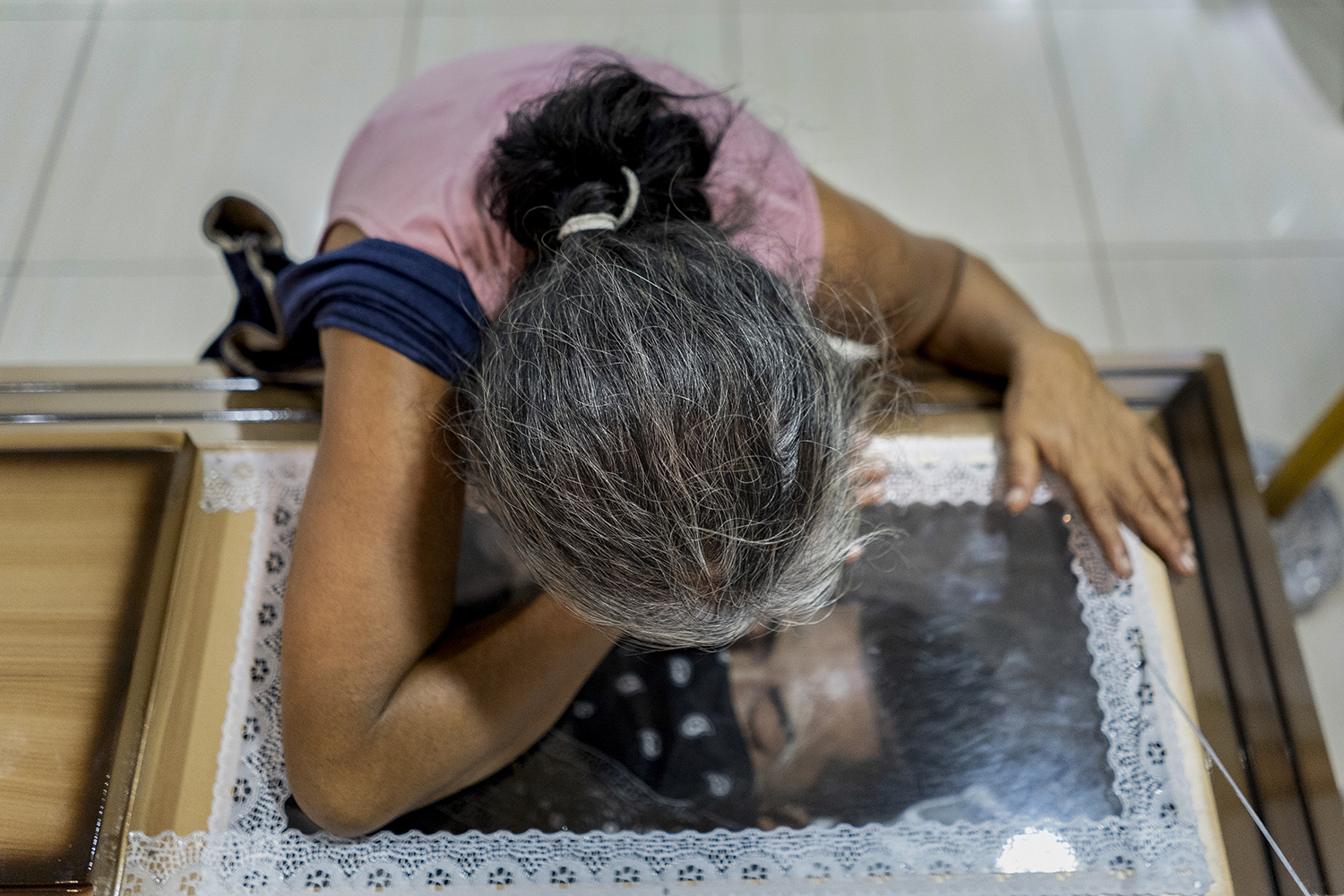 Gloria, whose last name has been omitted to protect her identity, mourns her 25-year-old son, Stanley, at his wake in San Martín, San Salvador, on Nov. 7, 2018. Stanley’s face is covered by a bandana after he was strangled by members of La 18 for not fulfilling the missions the gang asked of him, his mother said. He is also survived by his wife and 6-year-old son. Tariq Zaidi for Foreign Policy 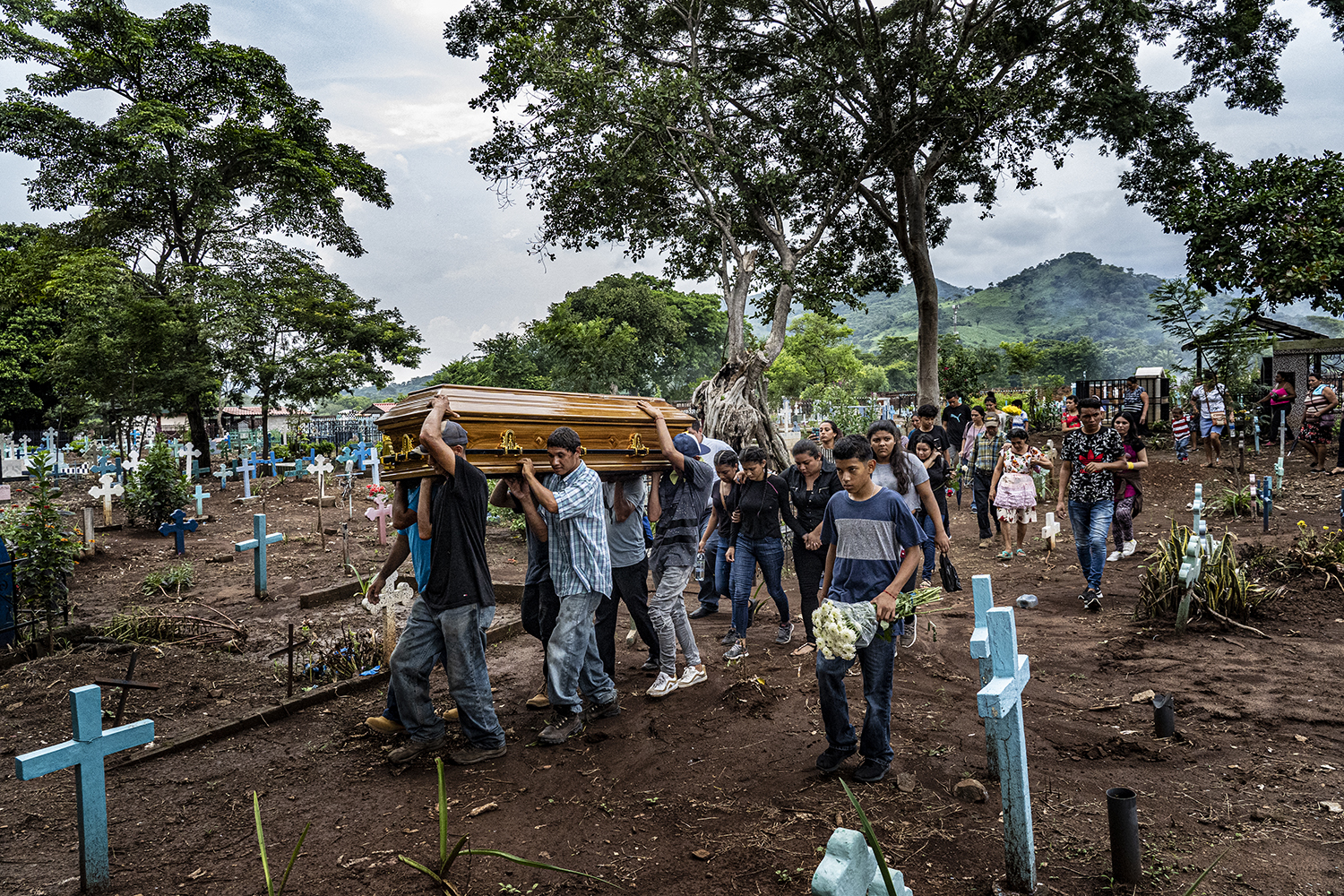 A funeral delegation carries the coffin of Douglas Rivera—known as “Cara de Malo” or “Face of Evil”—in Chapeltique Municipal Cemetery on Sept. 27. The 22-year-old was one of four members of MS-13 killed by the Special Police Tactical Unit while hiding in a jungle camp in the municipality of Moncagua. Tariq Zaidi for Foreign Policy 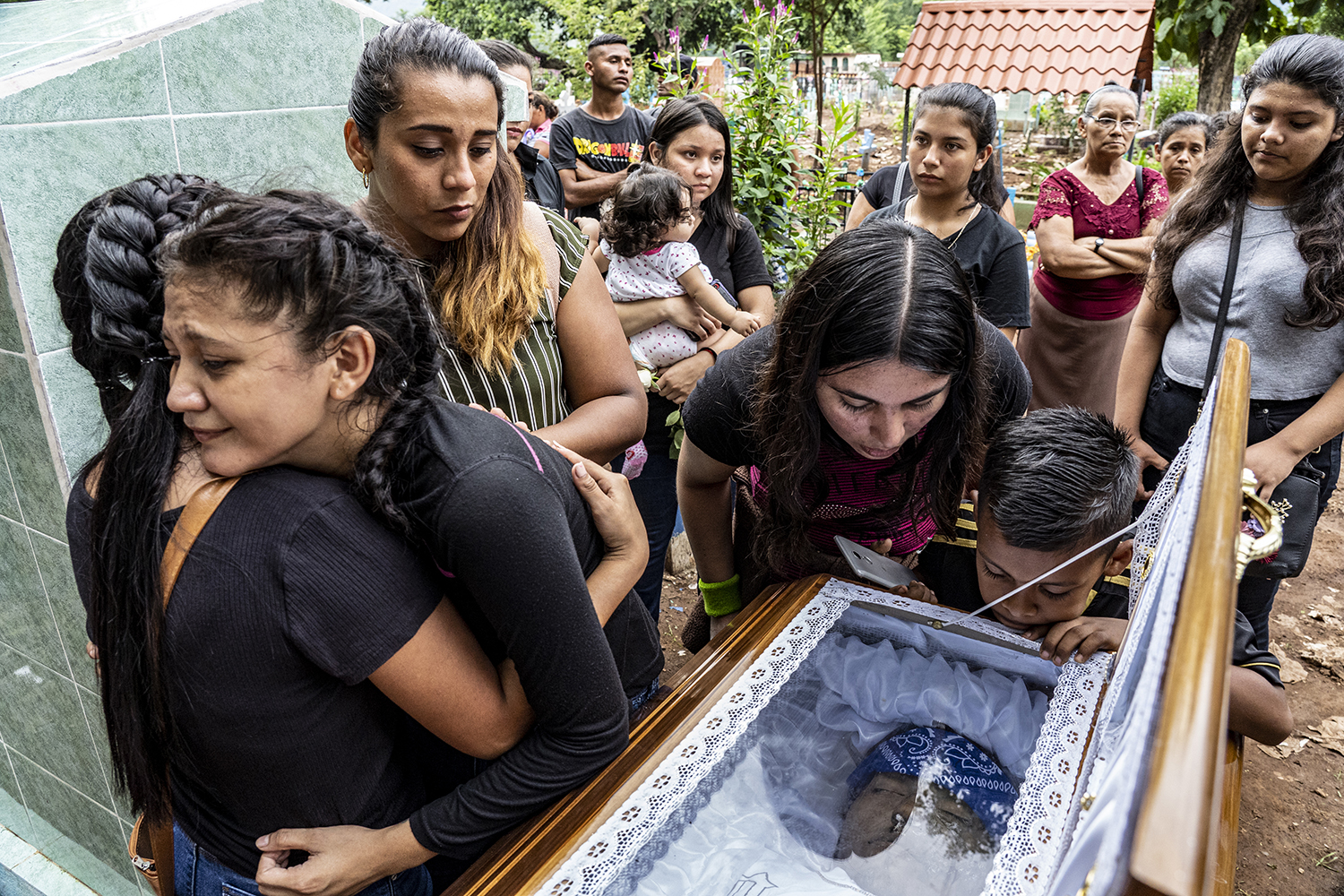 Rivera’s 19-year-old wife, whose name has been omitted to help protect her identity, left, reacts during his funeral on Sept. 27. Fellow gang members placed marijuana, a military medal, and a shirt reading “Cara de Malo” in his grave. Tariq Zaidi for Foreign Policy

Traditionally, both major gangs have operated in a decentralized way, usually financed through daily extortion promises, which range from just $2 to $3 for small businesses and $5 to $20 for medium-sized businesses and distributors. However, through combined extortion of 70 percent of all businesses in the country, the gangs collect large amounts of money, with estimated revenues of $31.2 million for MS-13. The money spent because of gangs, either through extortion or buying private security, combined with the money lost because of violence, amounts to a staggering $4 billion per year, about 15 percent of the country’s GDP, according to a report from the Central Reserve Bank.

In the past, the Nationalist Republican Alliance (known by its Spanish acronym ARENA), the traditional right-wing party that has held control over El Salvador for much of its postwar history, has been known to strike pacts with gangs that allowed extortion collection as well as executions of rivals. Testimony from 2017 showed that the bribes amounted to $350,000 in the 2014 elections by the two parties, and the eventual winning party, the left-wing Farabundo Martí National Liberation Front, promised up to $10 million in microcredit to gang leaders in exchange for an electoral victory. 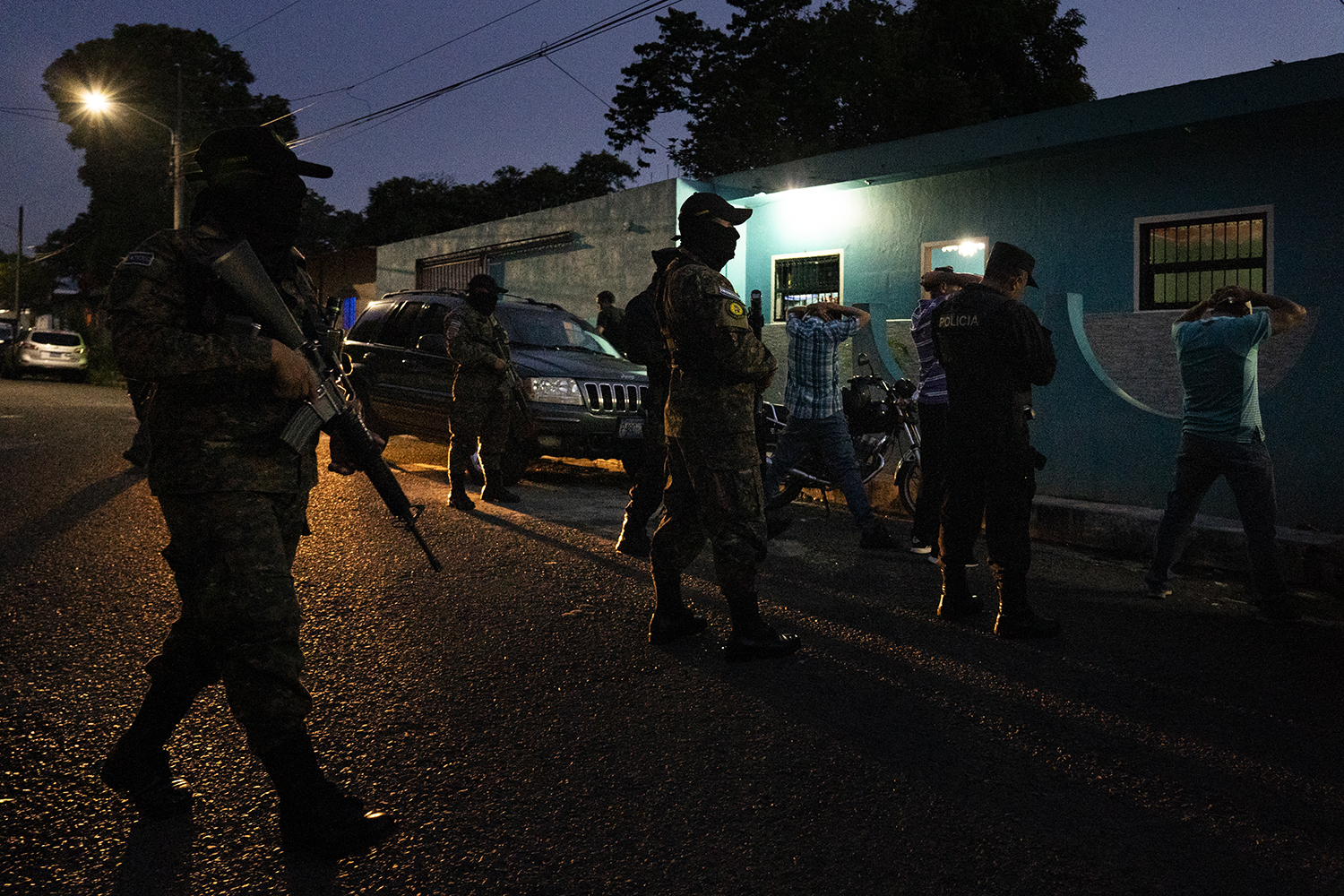 Officers raid a brothel and bar in Lourdes Colón, in the department of La Libertad, on Sept. 24 in a joint operation between the police Joint Counter-Criminal Task Force  and the Army. Tariq Zaidi for Foreign Policy 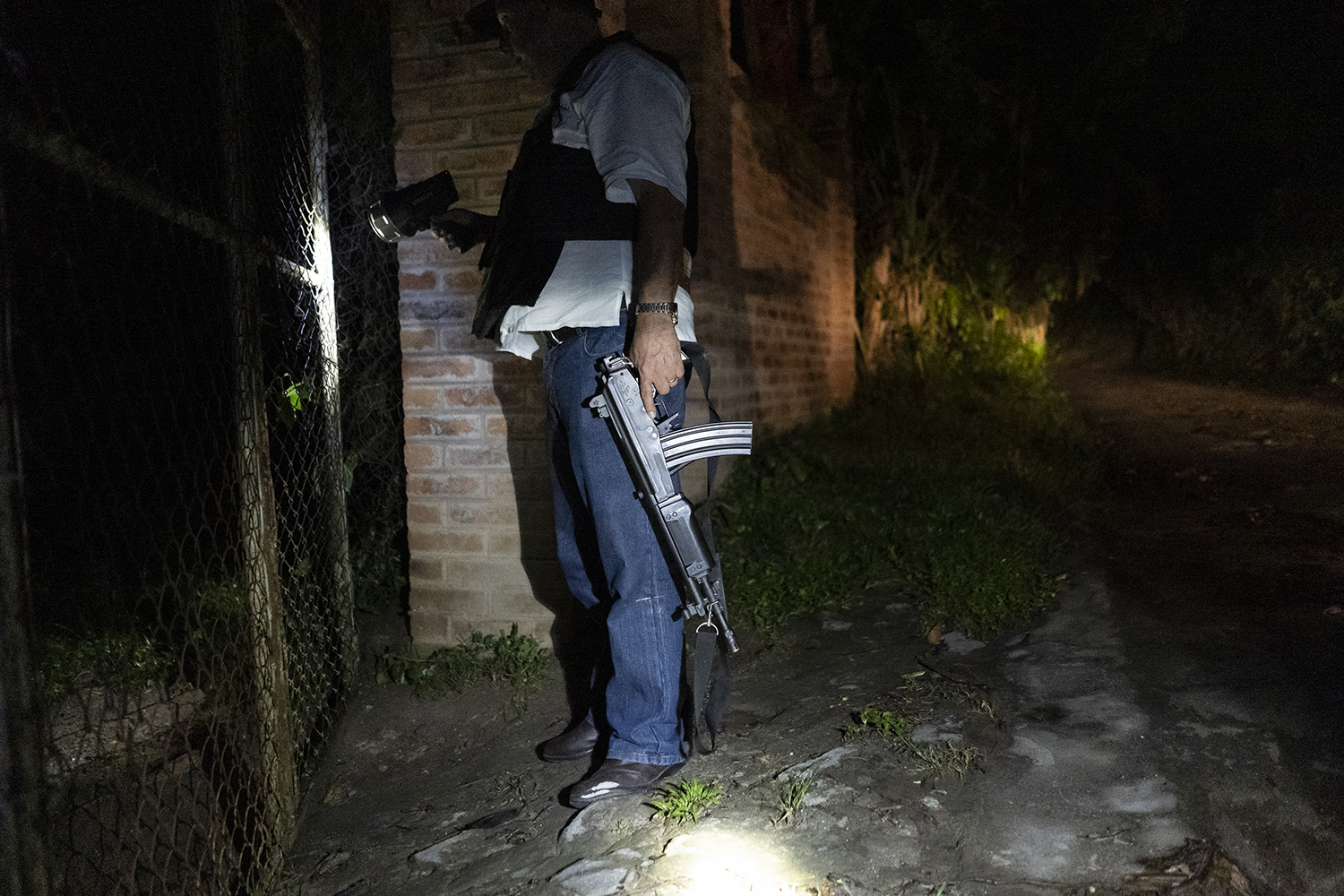 Mauricio, whose last name has been omitted to protect him after numerous death threats, patrols with a machine gun during a search-and-capture operation against gangs in the San José Guayabal municipality on Nov. 3, 2018. 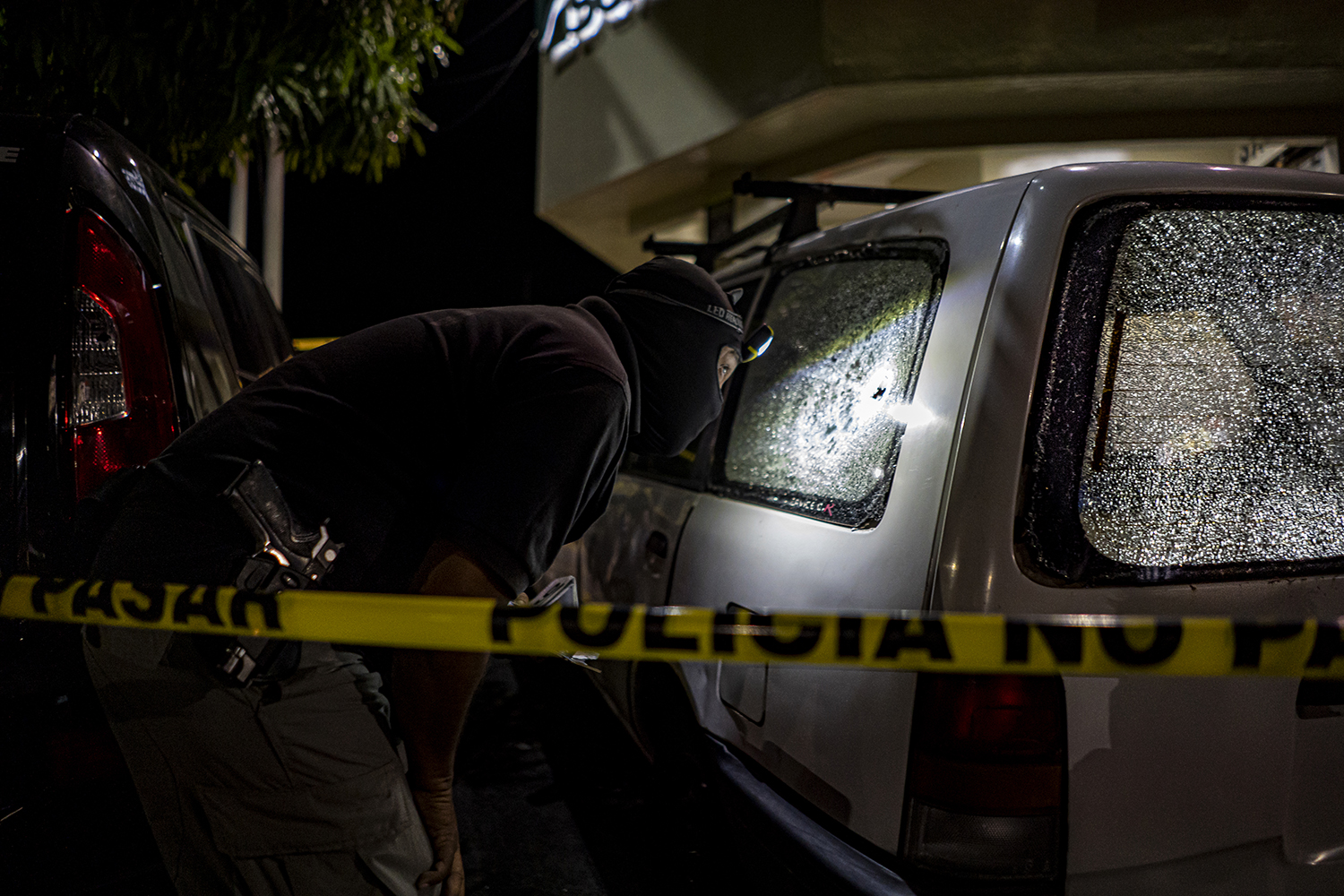 A police officer examines bullet holes in a car after a shooting in a parking lot in San Miguelito, San Salvador, on Sept. 24.

The election in February of Nayib Armando Bukele—a young president from neither of the two major parties—has brought some measure of hope. He has pledged to eradicate gangs in the country within three to four years.

A prisoner lifts a makeshift barbell made of soda bottles and sand at the Chalatenango Penal Center on Nov. 7, 2018. The facility has more than 1,500 prisoners as of 2018, all of whom are part of MS-13. Tariq Zaidi for Foreign Policy 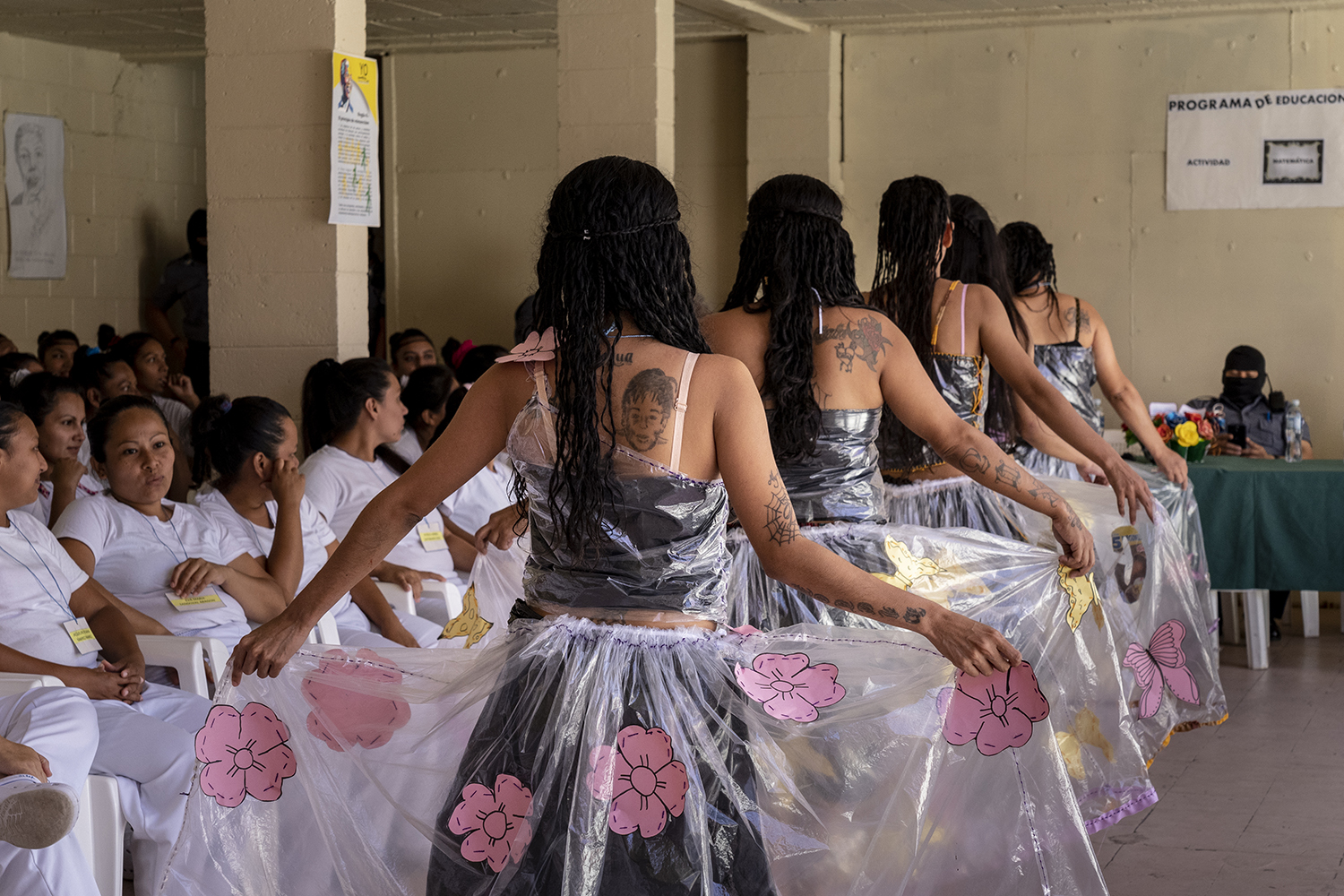 Prisoners display their fashion creations as part of the “Yo Cambio” or “I Change” program, which attempts to rehabilitate prisoners, at the Penal Center of Quezaltepeque on Nov. 9, 2018. Tariq Zaidi for Foreign Policy 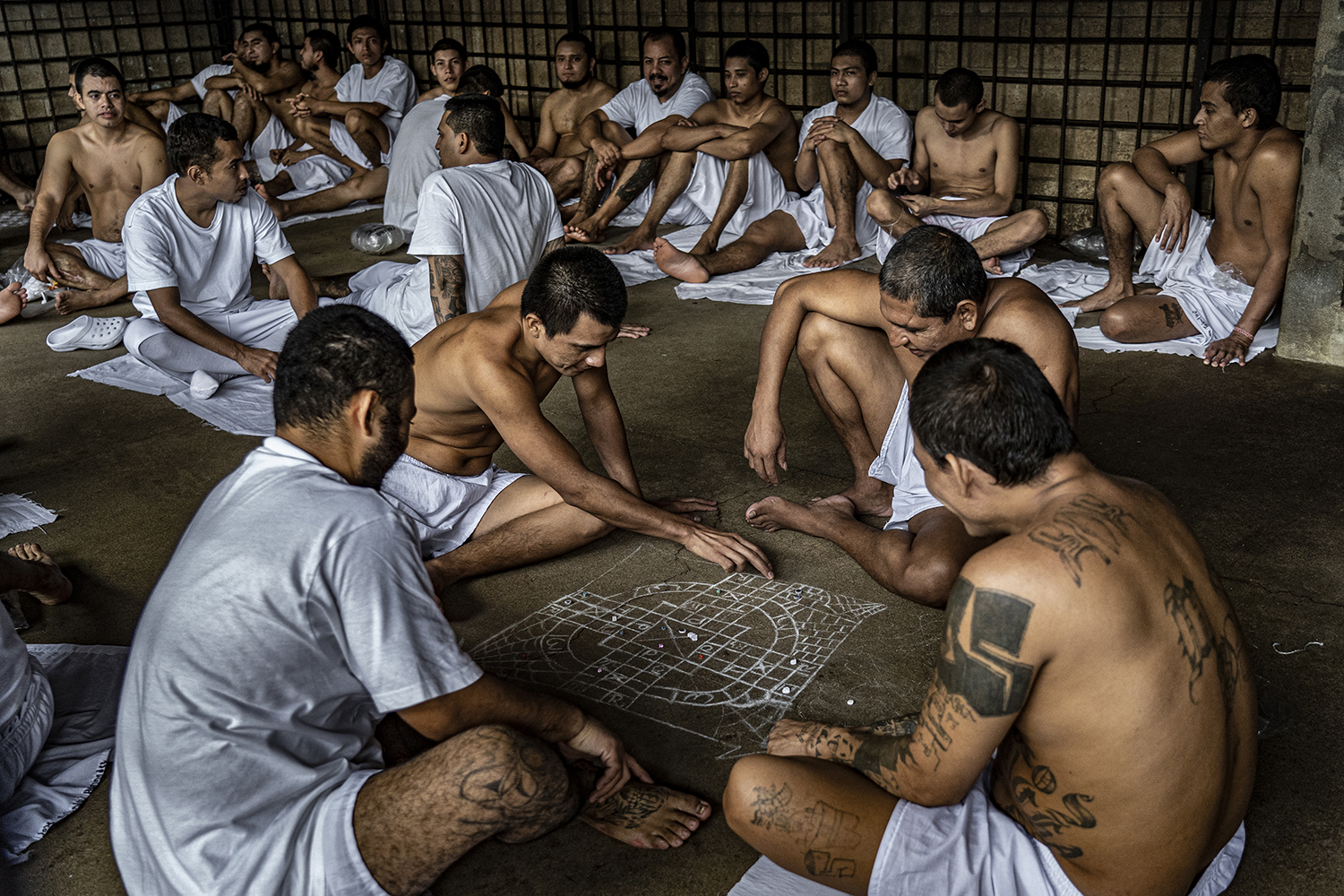 MS-13 gang members play a game in their cell in the Bartolinas Policiales de Lourdes, Colón, on Sept. 28. Tariq Zaidi for Foreign Policy

During his first 150 days in office, the murder rate has dropped precipitously. The first seven months of 2019 were the least violent months in the last 15 years (except for 2013 and the 2012 gang truce). On July 31, not a single killing was recorded—only the eighth murder-free day in 19 years. However, violence and disappearances remain a fact of life.

Even with a new reformist government in place, it is not hard to see why so many Salvadorans still see emigration as the only way out. For now, fear, violence, and intimidation remain an unavoidable part of everyday life. 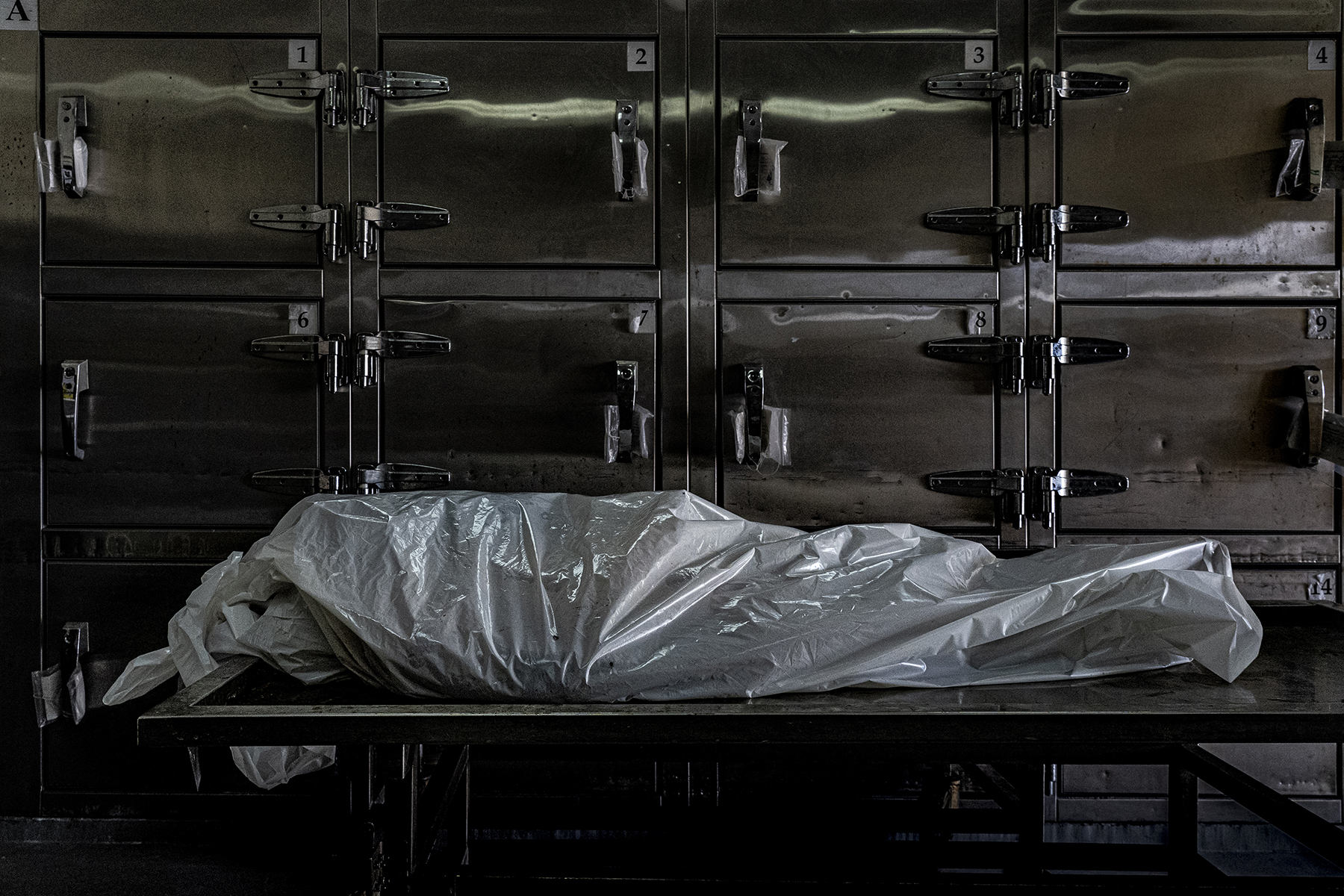 The body of Eduardo Castillo Calles, 54, nicknamed Limonada (Lemonade), lies in the autopsy room of the Institute of Legal Medicine in San Salvador on Oct. 4. He was a farmer and former soldier who formed a vigilante group to kill members of MS-13 near the El Tigre hamlet. Castillo Calles killed at least 15 members of MS-13, according to police, and they suspect his death was likely revenge from members of the gang. Tariq Zaidi for Foreign Policy

This is an edited and updated version of an article first posted on Nov. 21.

Tariq Zaidi is a freelance photographer based in London. Zaidi’s photography focuses on inequality, endangered communities, and social change. He aims to capture the spirit and dignity of people in connection with the environment that they inhabit. You can see more of his work on Instagram @tariqzaidiphoto Instagram: @tariqzaidiphoto

NEW FOR SUBSCRIBERS: Want to read more on this topic or region? Click + to receive email alerts when new stories are published on North America