The Macao Special Administrative Region turns 20 this year, and no one wants to celebrate it more than Beijing. As protests enter their seventh month in neighboring Hong Kong, China’s central government is increasingly turning to the Portuguese colony-turned-gambling haven as proof that its governing principle for the two cities—known as “one country, two systems”—is “entirely viable, doable, and able to win the heart” of local populations. That’s particularly important since the success of the system is also critical for winning over Taiwan—where the prospects of Beijing-favored electoral candidates in January’s elections are sinking fast.

But the only reason Macao looks like a viable model is the unique circumstances of its past. To be sure, Macao’s colonial history is just one factor in the territory’s relative quietude. As many scholars point out, demographics are a factor. Macao’s population is less than one-tenth that of Hong Kong, making it that much more susceptible to economic and sociopolitical forces such as investment and migration.

Yet having lived through centuries under the increasingly disinterested rule of Portugal, few Macao residents today long for the days under what the University of Hawaii professor Cathryn Clayton referred to as Lisbon’s “hapless imperialism.” Macao residents retained a high level of Chinese identity in part because Portugal offered so small an alternative. The contrast with the relatively sophisticated approach adopted by British authorities in Hong Kong underlines the unique weakness of Portuguese colonialism—and how the People’s Republic managed to exploit these failings to consolidate its position in the city even before the handover.

The very idea of Portuguese control over Macao is somewhat misleading. Even after obtaining the right to occupy Macao from the Qing empire in 1887, Lisbon’s effective control over the city was frequently contested by groups including triads, bandits, and successive mainland governments, each of which struggled to exert its own influence over the colonial outpost and ate away at Lisbon’s attempts at governance.

Macao’s 1966 riots were simultaneously a sign of local authorities’ inability to deal with festering local grievances and a direct cause of Lisbon’s disinterest in the territory throughout the second half of the century. The riots—a local, anti-colonial uprising influenced by the Cultural Revolution on the mainland—culminated in the local governor’s capitulation to the demands of protesters, as well as those of the Guangdong provincial government, which seized the opportunity created by the uprising to expunge lingering Kuomintang influence from the city.

Today, some scholars single out 1966 as the moment in which the fates of Macao and Hong Kong began to sharply diverge. Hong Kong’s British administrators responded to their own riots by first violently suppressing protesters and subsequently reformulating colonial policy, as well as introducing reforms that created a police force once known as “Asia’s finest.” In sharp contrast, Macao’s administrators barely reconsidered their approach to governance and instead sought to free themselves of the problem altogether by reverting rule of the territory back to China.

When China refused to take back Macao, the Portuguese government took action to distance itself anyway, going as far as to affirm the temporary nature of its administration in the country’s 1976 constitution. By then it helped that Lisbon was itself freshly democratic following a 1974 coup driven in part by a failed attempt to hold on to the remnants of empire in Africa. A significant scaling back of Portuguese interests on Macanese shores followed, leaving many Macao residents feeling, in the words of one local legislator, “that the Portuguese government [did] not really want to run [the] city.”

As time wore on, Macao increasingly became an afterthought to its colonial metropolis, whose colonial policy seemed retrograde, even by colonial standards. In matters of access to education, for instance, Lisbon lagged considerably behind London. Whereas British administrators in Hong Kong established a centralized school system tasked with the education of the general population, Macao’s arrangement was a decentralized patchwork that failed to provide education for the majority Chinese population.

This is evident in the (imperfect) metric of language education. Though it’s hard to say to what extent Portuguese administrators spoke any Chinese language, we do know that Portuguese—the language of the administrative class—was never widely spoken by the majority of Macao’s population. And although steps were finally taken to increase the language’s penetration in the years leading up to the handover, Portugal’s modest attempts bred mediocre results. According to the city’s 2001 census, conducted just two years after the handover, only 3 percent of the city’s population could speak Portuguese, which, in addition to its social importance, was also an indispensable part of political life as the language of the legal system. Compare that with Hong Kong, where nearly 70 percent of the population understood English as of 1993.

In economic performance too, Portugal’s loss was China’s gain. Whereas Macao’s early years under Lisbon did prove profitable, the city’s standing as a hub of global trade declined in the later decades of colonial rule, especially after China’s surrender of Hong Kong to the British in 1841. Eclipsed by the British enclave, Macao’s economy suffered, eventually (and ironically) leading to local authorities’ decision to legalize gambling as a way of generating income. The gambling industry allowed the territory to hobble onward, but it did not immediately lead to prosperity. 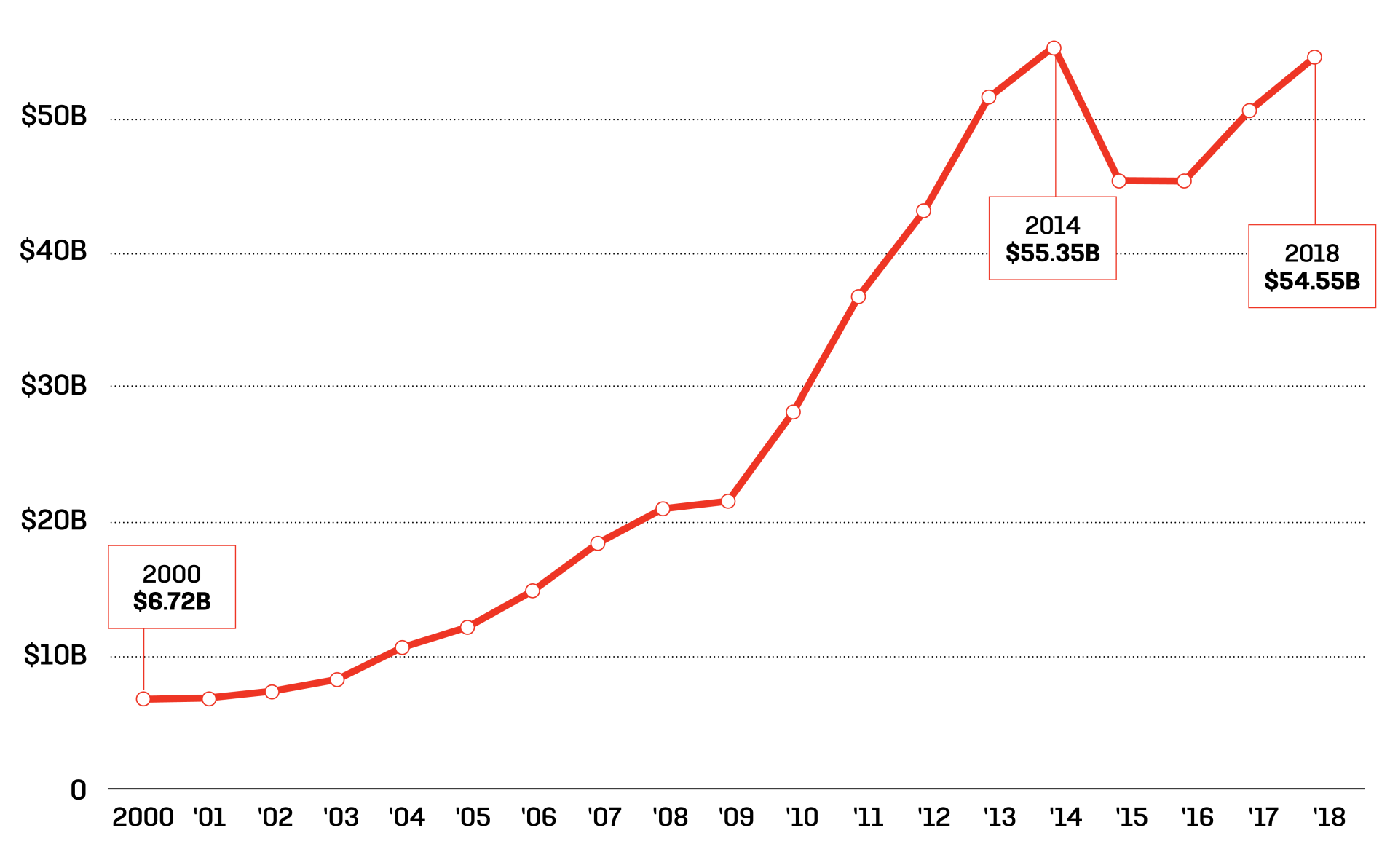 It was not until the redistribution of the tightly held casino licenses in 2002—by then already under the watchful eye of Beijing—and the influx of foreign investment that the Macanese gambling industry took off, driving the economy to grow nearly sevenfold and thrusting the territory into the economic stratosphere. To be sure, a crackdown on officials’ conspicuous consumption—one of the main drivers of the casinos—dented it badly in 2015. Yet while the size of Hong Kong’s economy may have doubled over the past two decades, the economic transformation experienced by Macao since the handover is unique and uniquely linked to the city’s new administration as part of mainland China.

With Macao set to eclipse Qatar as the richest place on Earth per capita sometime next year, it makes sense that Beijing would want to replicate the city’s docile success in Hong Kong, where the edges of “one country, two systems” are visibly fraying. The idea that the results are replicable from one city to another, however, rests on a distorted understanding of the two cities, and Beijing ignores these differences at its own peril.

Macao’s present owes as much to the city’s colonial past as it does to the city’s current relationship to mainland China. By failing to provide for the majority of the population, Lisbon created a governance deficit that resulted in ready improvements to people’s livelihoods once Beijing was back in the picture. It need not have been this way. Although there is merit to the argument that the goal of colonization is to plunder and not to govern, the British approach to Hong Kong suffices to demonstrate that, even so, not all colonial policies are made equal.

Against the low standard created by Portugal, Britain’s so-called enlightened governance of Hong Kong afforded Hong Kongers a level of well-being that offset some of the negative features of colonial rule, such as the lack of direct elections, while helping to transform citizens’ long-term expectations toward their governors. If Beijing is sincere about winning the hearts and minds of the people of Hong Kong, then it needs to think like a more effective colonizer.

Ricardo Barrios is an analyst at RWR Advisory, where he conducts risk analysis on Chinese entities. He is one of the American Mandarin Society's 2019 Next Generation Scholars.

Singapore Isn’t The Next Hong Kong