The Fight for ISIS’s Old Territory Is Just Beginning

A host of forces including Turkish and Iranian proxies to Russian troops and Syrian government forces are jockeying for control of the lands that once were held by the Islamic State. 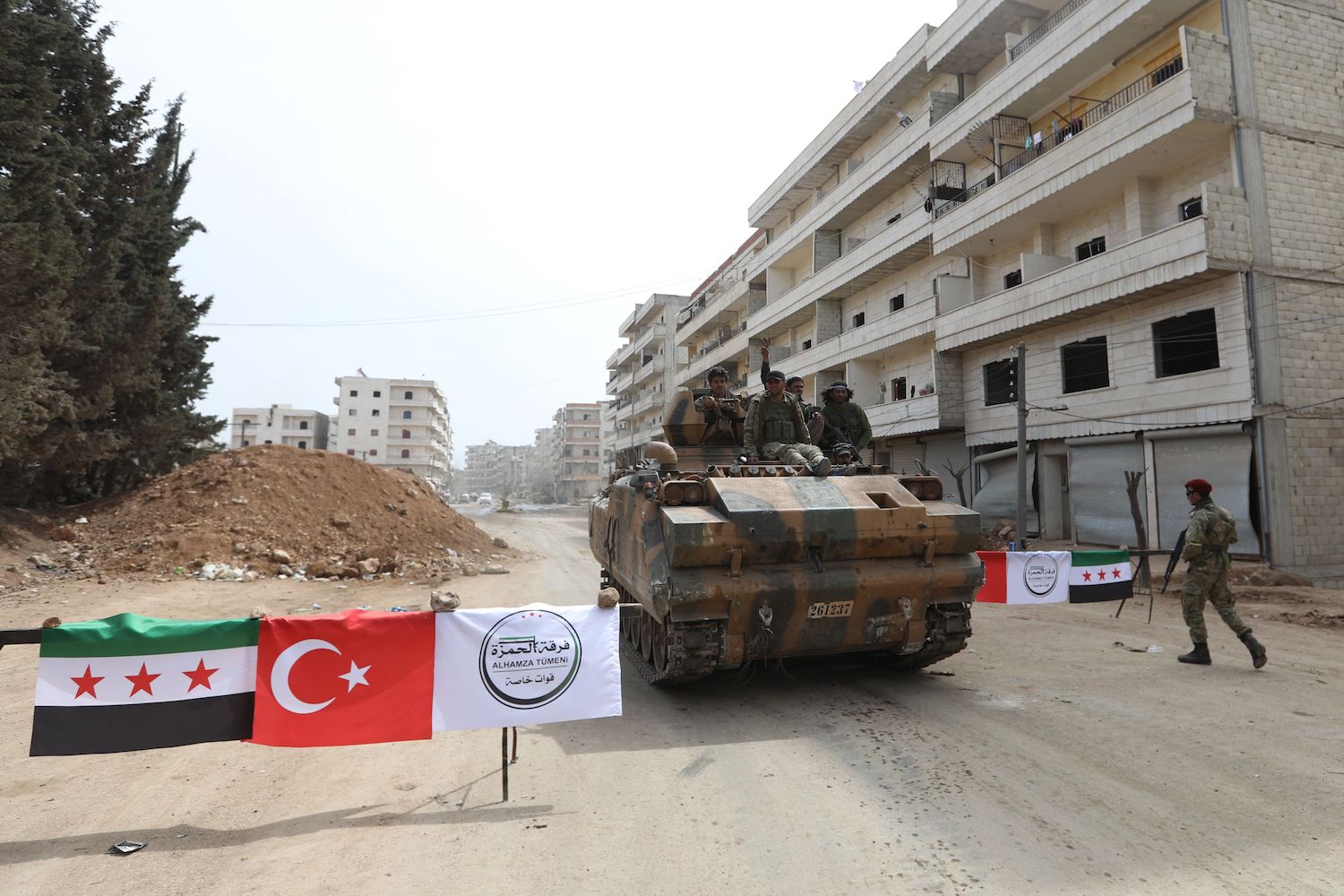 Turkish-backed Syrian Arab fighters staff a checkpoint in the Kurdish-majority city of Afrin in northern Syria after seizing control of it from the Kurdish People’s Protection Units (YPG) on March 18, 2018. OMAR HAJ KADOUR/AFP VIA GETTY IMAGES

The collapse of the Islamic State’s so-called caliphate and the death of Abu Bakr al-Baghdadi were symbolically important. His death bookends a five-year effort to defeat the Islamic State that involved more than 70 countries and comes amid a U.S. withdrawal from parts of Syria. The United States remains in other areas of eastern Syria in Deir Ezzor and Hasakah provinces, where it is keeping Islamic State sleeper cells on the run.

The Islamic State once occupied an area the size of Britain, and the war against it made millions of people refugees.

However, the slow defeat of the group has left a vacuum in Iraq and Syria; areas once controlled by the group have been filled by forces linked to Iran, Turkey, the United States, and Russia. New conflicts are emerging, including the protests in Iraq and Turkey’s invasion of Syria. A conflict between Israel and Iranian proxies, such as Hezbollah, could even be unleashed. This is bad news for average people seeking to recover from the depredations of the Islamic State.

It is a cliché that countries sometimes win the war but lose the peace. However, in Syria and Iraq, it is true. The Islamic State once occupied an area the size of Britain, and the war against it made millions of people refugees and led to the destruction of cities and the disappearance of thousands in the carnage. For instance, 3,000 Yazidis, members of a minority group in Iraq targeted by the Islamic State in 2014, are still missing. There are hundreds of mass graves scattered across Iraq and Syria, with forensics teams only beginning now to identify remains. The sudden U.S. decision to leave parts of northern Syria that the U.S.-backed Syrian Democratic Forces (SDF) had liberated has now enabled a Turkish invasion that forced an estimated 200,000 people from their homes. Worse may be yet to come.

Circa 2015: ISIS at Its Greatest Extent 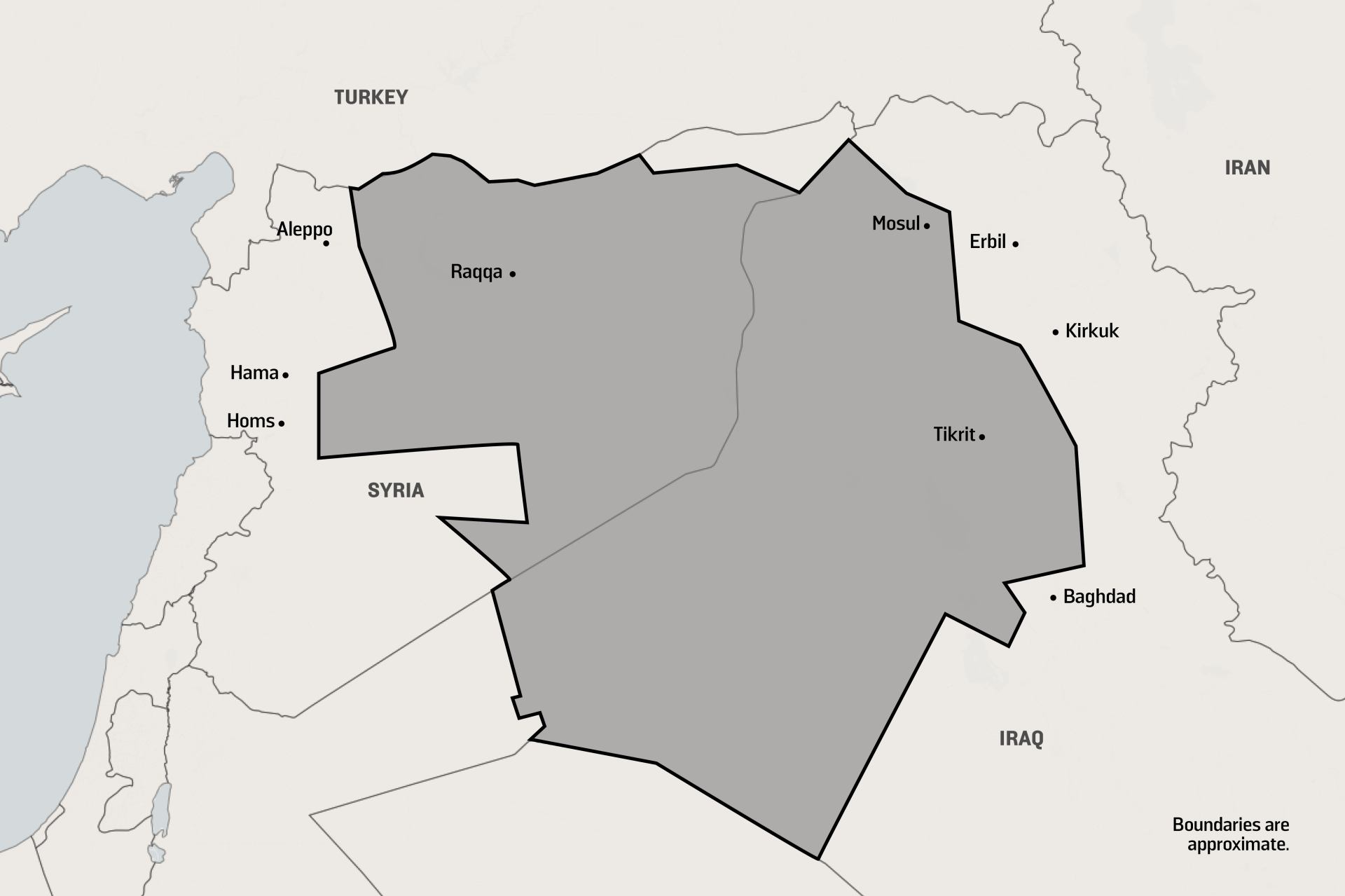 On a recent trip to northern Iraq in September, I met with refugees. Yazidis still sitting in barren tents near Dohuk said they could not go home because areas in their home villages around Mount Sinjar were festooned with armed checkpoints. Some of these are run by the Popular Mobilization Units (PMU), a group of mostly Shiite militias that is now an official arm of the Iraqi security forces. These same units have been accused of killing protesters in other parts of Iraq in October.

Turkey has carried out airstrikes in Sinjar, alleging that the Kurdistan Workers’ Party (PKK) is present there. In northern Iraq, the Islamic State still exists in various forms, slipping in and out of villages south of Mosul and exploiting the lack of coordination between the autonomous Kurdistan Regional Government and Iraqi federal forces. The overlapping military forces create a sense of insecurity, as opposed to the security that Iraq seems to think it has achieved since militarily defeating the Islamic State.

The feeling one gets from speaking to people impacted by the war against the Islamic State is that from Raqqa in Syria to Mosul in Iraq, a distance of 230 miles, a gaping wound remains that may not be easily healed. The advance of different forces, such as Turkish-backed Syrian rebels near Tal Abyad in Syria and U.S. repositioning to secure oil fields near Deir Ezzor, neglects local communities, representing a competition for land, power, and resources.

The post-Baghdadi period should be seen as a series of interconnected events and conflicts that emerged after the setbacks the Islamic State faced in 2017. This list includes the Kurdistan Regional Government’s referendum in September 2017; the attempted attack on SDF-held oil fields by Syrian regime-backed Russian contractors in February 2018; the threats by Turkey to invade eastern Syria and its eventual attack on the SDF in October 2019; a series of mortar and rocket attacks near U.S. facilities in Iraq allegedly carried out by pro-Iranian elements; and the airstrikes attributed to Israel that were carried out in Syria and Iraq against Iranian-linked facilities.

The conflicts in Syria and Iraq appeared to be winding down between 2017 and 2019 as Russia, Turkey, and Iran met frequently as part of the Astana process and agreed to areas of control and influence in Syria and Iraq that kept an Islamic State resurgence in check. But the forces unleashed over years of war in Iraq and Syria have now come back to haunt almost everyone. The PMU in Iraq is infiltrated by groups that work closely with Iran’s Islamic Revolutionary Guard Corps (IRGC). Formed to fight the Islamic State after a fatwa by Grand Ayatollah Ali Sistani in 2014, it has led the recent crackdown on protesters, and its political leaders want the U.S. presence in Iraq to end. Syrian rebel factions have been shoehorned by Turkey into a Syrian National Army (SNA) now being used to fight Kurdish forces. The SNA is accused of widespread human rights abuses in areas Turkey helped it control.

October 2019: Areas Retaken From ISIS and Who Benefited 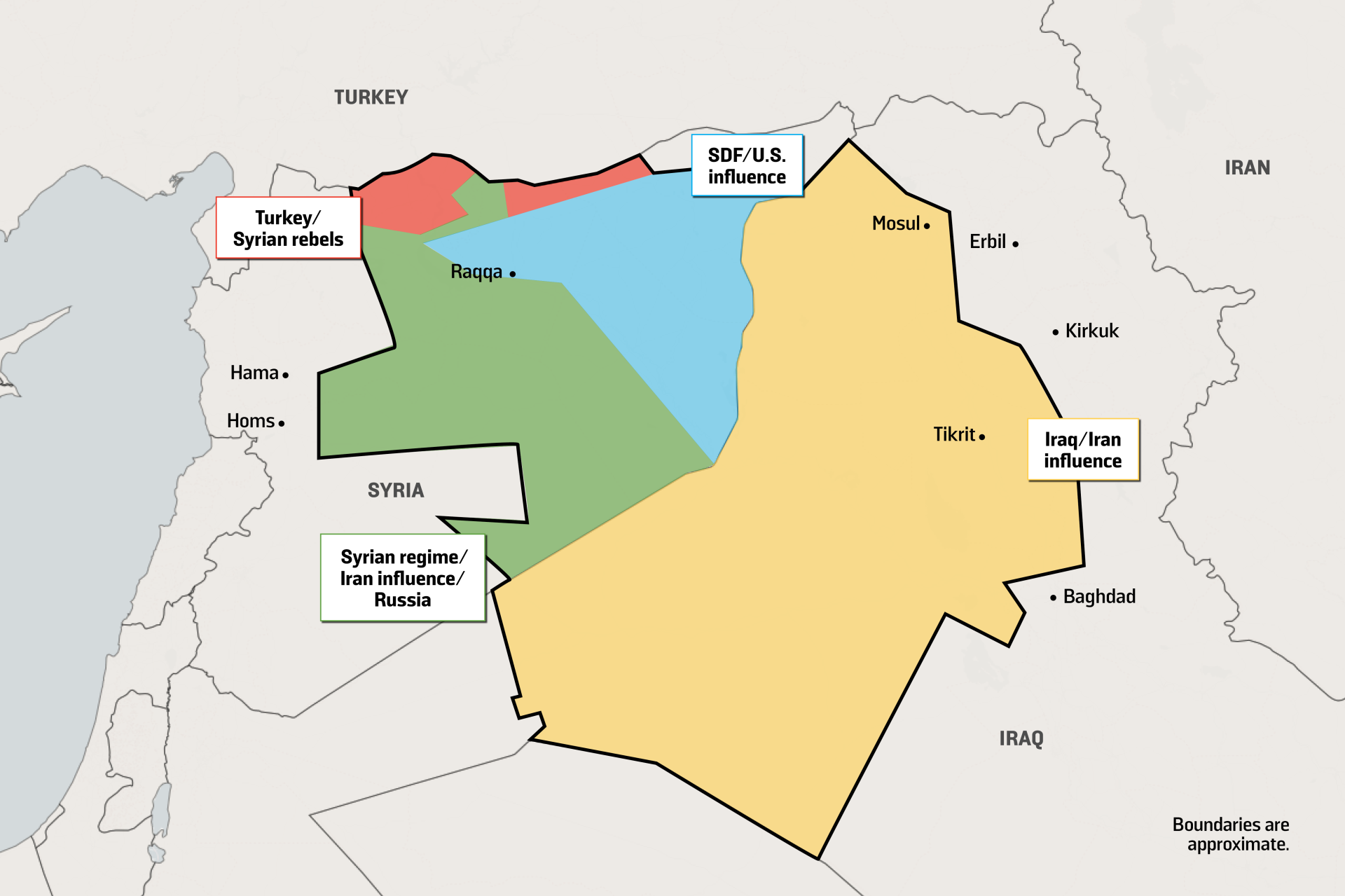 There is also a simmering war for influence in the skies over Iraq and Syria. Iran and Israel both appear to see Syria as a strategic corridor; from Israel’s point of view, Iran’s growing role means Tehran can more easily supply Hezbollah with precision guidance for rockets and threaten Israel from an extended front line along the Golan Heights. Satellite imagery has shown alleged Iranian bases along this route, and the U.S. Defense Department says there are several thousand Iranian members of the IRGC in Syria. Israel says it struck dozens of IRGC targets in Nov. 20 airstrikes that it launched in response to rocket fire from Syria.

The best way to look at the complex and intricate post-Baghdadi landscape is as a series of spheres of influence projected by regional and global powers, operating through local paramilitary units. For instance, Turkey sees the entirety of northern Syria as an area it wants to either control directly or use proxy forces to control. It now runs areas around Afrin, Idlib, Jarabulus, and Tal Abyad. This is an unprecedented expansion of Ankara’s power not seen since the Ottoman Empire. A Russia-Turkey cease-fire deal has resulted in joint patrols by the two countries, and Turkish operations have paused.

Putin and Erdogan negotiated a deal on Oct. 22 that lays the groundwork for a frozen conflict between Turkish-backed proxies, the SDF, and Syrian regime forces much like what exists in the Donbass region of eastern Ukraine.

Russia has entrenched itself in the coastal city of Latakia and sent its military police to areas in eastern Syria, seeking to supplant areas the U.S. forces withdrew from and sign a deal with Turkey. Russian President Vladimir Putin and Turkish President Recep Tayyip Erdogan negotiated such a deal on Oct. 22, and it looks to sketch out a frozen conflict between Turkish-backed proxies, the SDF, and Syrian regime forces and appears more like what exists in the Donbass region of eastern Ukraine, where pro-Russian forces clash with the Ukrainian army daily, than a peaceful solution. Moscow has experience with managing these kinds of conflicts in the Caucasus region and other parts of the former Soviet Union, including Abkhazia, South Ossetia, and Transnistria.

Iran, working through Shiite paramilitaries, such as Hezbollah and the PMU, has unparalleled access in Iraq and Syria today. The United States, partnering with the SDF, is purposely reducing its footprint, but it still has a major role with 1,000 soldiers and personnel in Syria and around 5,000 in Iraq. The U.S. Army is partnering closely with the Kurdish Peshmerga in northern Iraq, for instance. Much of this is a result of the war against the Islamic State.

The United States helped create the SDF, Turkey helped create the SNA, and Iran’s Quds Force, an elite unit of the IRGC, works with leaders of the PMU. Turkey’s backing for the Syrian rebels, although it appeared initially in the context of opposing the Assad regime, is today fully committed to fighting the SDF, which Turkey alleges is linked to the PKK. That is why Turkey redirected the Syrian rebels to fight against the Islamic State in Jarabulus, blocking the advance of the SDF in 2016, and then sent them into Afrin to fight the Kurds in 2018 and then into Tal Abyad in 2019.

For civilians in the vast areas liberated from the Islamic State, the future is uncertain. The U.S. government says the coalition helped free 7.7 million people in an area that covers 20,000 square miles. In Iraq, there are still 1.6 million internally displaced persons (IDPs) and nearly 230,000 Syrian refugees, according to the Office of the United Nations High Commissioner for Refugees (UNHCR). An additional 12,000 Syrians fled in October to Iraq following Turkey’s offensive.

In areas of Syria retaken from the Islamic State, there are IDPs hoping to return to areas such as Raqqa, and there are proposals by Turkey to resettle more than a million refugees from other parts of Syria in areas it has conquered. Even though Turkey claimed it wants to resettle people, its offensive has caused around 200,000 to flee, and UNHCR has had to step in to distribute blankets to 52,000 of them.

Yet despite the obvious needs for a major effort to aid civilians, the White House says it is focusing on securing oil fields now and has ended diplomatic efforts aimed at achieving what it once termed “stabilization” in eastern Syria. A mosaic of minority and tribal groups, many of them targeted by Islamist militants, have little chance to rebuild their lives now in Syria and Iraq.

The successful operation against Baghdadi symbolizes how short-term tactics, such as killing terrorists, fail to advance any sort of long-term solution to the instability and radicalization that led to the Islamic State’s rise. The U.S. government doesn’t want to address these issues in Iraq or Syria.

Iran, Russia, and Turkey want to solve issues on the ground, but their approach tends toward cynical power politics and carving up these states into spheres of influence. Every country involved in the war against the Islamic State now seems drawn to the spoils in its wake.

The Islamic State Will Outlive Baghdadi. Afghanistan Shows How.

The Islamic State-Khorasan offers a powerful case study of the militant group’s ability to create autonomous affiliates that flourish and endure.

Israel’s Occupation of Lebanon Failed. Turkey’s Invasion of Syria Probably Will, Too.

Seth J. Frantzman is the author of After ISIS: America, Iran and the Struggle for the Middle East. He has covered the Middle East for the Jerusalem Post, Defense News, and other publications. Twitter: @sfrantzman