The new head of the IAEA was the United States’ preferred candidate. But, as global tensions rise, he quickly needs to prove his independence.

On Monday, after officially being appointed by acclamation at the United Nations’ headquarters in Vienna as director-general of the International Atomic Energy Agency (IAEA), Rafael Grossi addressed the 171 IAEA member states. He described the most defining moment in his career as the one when then-Argentine President Raúl Alfonsín in 1985 made a gesture of trust and invited the Brazilian President José Sarney to visit the Argentine nuclear facility at Pilcaniyeu in Patagonia.

Argentina and Brazil were on the verge of an outright race toward nuclear breakout at the time. But gestures like Alfonsín’s managed to turn the countries’ relationship into one of nuclear cooperation instead. “At this moment, I learned that through diplomacy, dedication to peace, and a will to do the right thing,” Grossi said, “we can make things better for everyone.”

Grossi is the sixth head of the IAEA—whose mission is to promote the peaceful use of nuclear technology, while preventing its misuse for military purposes—and the first one from Latin America since the agency was founded in 1957. Nobody doubts the 58-year-old Grossi’s qualifications for the job given his decades of work on nuclear issues. But will he be able to steer the IAEA through the challenges ahead and at the same time maintain the agency’s credibility and impartiality? Much will depend on his ability to avoid letting IAEA member states exert political pressure on him.

Most recently, Grossi served as Argentina’s ambassador to Austria and the country’s permanent representative to the collected Vienna-based international organizations, including the IAEA. His career began in 1985, when he entered the Argentine foreign service and was immediately assigned to the foreign ministry’s newly established Nuclear Affairs and Disarmament Department, where he received technical training on nuclear technologies and nuclear science in the various nuclear installations in Argentina. In 2010, he was appointed chief of cabinet under previous IAEA Director-General Yukiya Amano. Grossi is said to have had an eye on the post of IAEA director-general ever since; in 2013 he even considered running against Amano, who managed to hold the position until he died in office in July from cancer.

The political battle to appoint a new director-general began in September with the official nomination of candidates. Besides Grossi’s nomination by the Argentine government, Burkina Faso nominated Lassina Zerbo; Romania put forward Cornel Feruta, who served as the IAEA’s acting director-general after Amano’s death; and Slovakia nominated Marta Ziakova. After several straw polls and rounds of balloting by the 35-member IAEA Board of Governors, Grossi and Feruta competed in a final ballot on Oct. 29, which resulted in Grossi securing a two-thirds majority.

Several Vienna-based diplomats say that Grossi won the race in part because he received support from the U.S. government and other political heavyweights, although Washington has not publicly commented on whom it supported.

Sources in Vienna say that the United States backed Grossi’s candidacy by sending statements of support to other members of the agency’s board. This led to Grossi winning the support of 24 members of the board, ahead of Romania’s Feruta with 10 votes. One of Grossi’s main challenges will thus be to show that he is indeed “absolutely independent and impermeable to pressure,” as he described himself to reporters after the vote.

“If the IAEA was siding with the U.S. government all the time, it would immediately lose credibility, and as a consequence it would not be a trusted partner for Iran anymore. The fact that it upsets both sides from time to time is actually a sign that so far it has handled the mission right,” said Richard Nephew, who previously worked on the Iran file for the U.S. State Department and is now a senior research scholar at Columbia University.

In other words, the agency’s credibility depends on the director-general’s ability to avoid politicization. 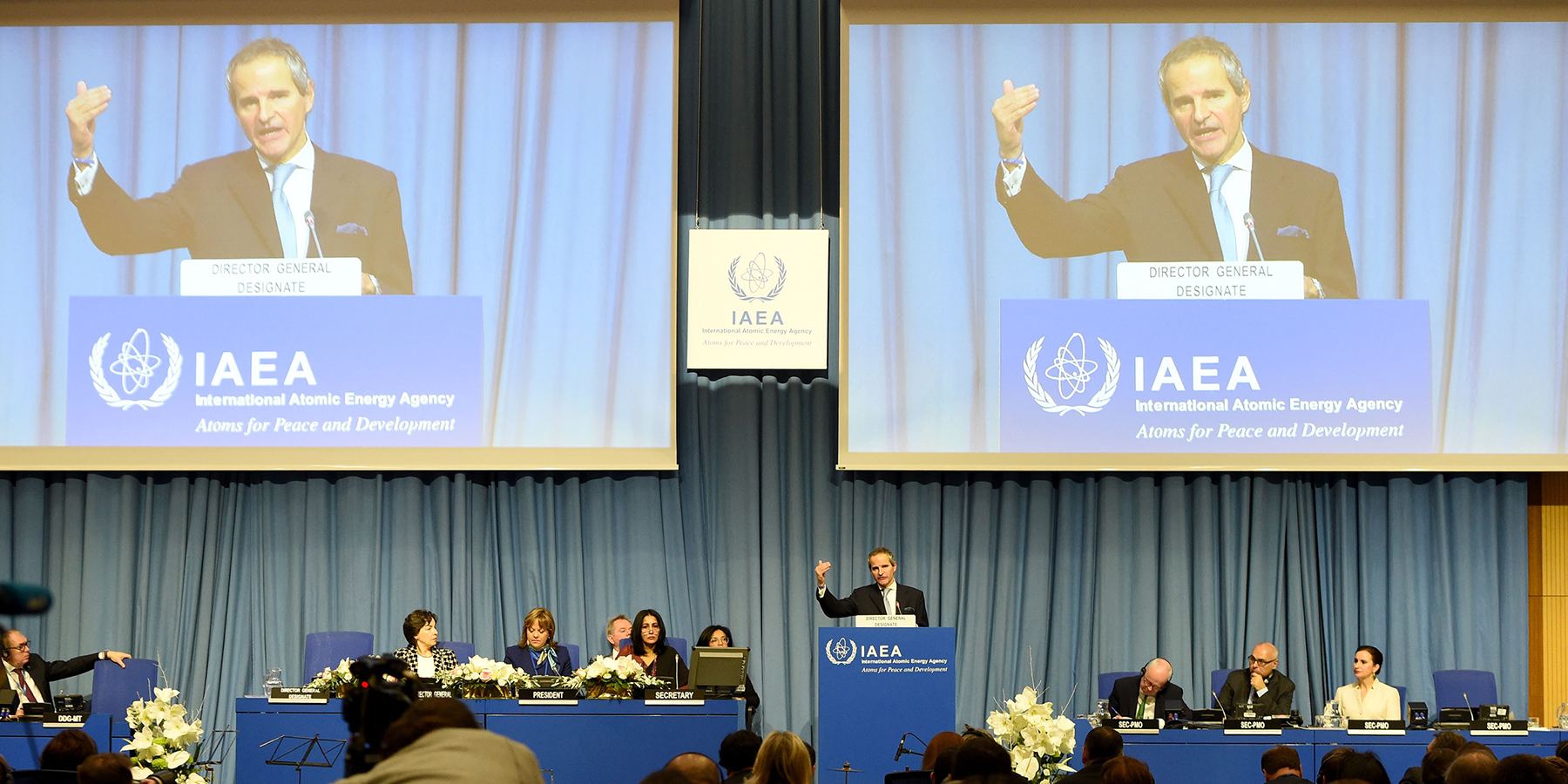 Grossi speaks at a special session of the IAEA general conference in Vienna on Dec. 2. Xinhua/Guo Chen via Getty Images

Grossi’s appointment comes at a critical moment for the agency because of its role in verifying and monitoring Tehran’s commitments under the Iran nuclear deal. Under the landmark agreement that was concluded in July 2015 between Iran and the five permanent members of the U.N. Security Council (plus Germany and the European Union), Tehran agreed to limit its nuclear program in exchange for the lifting of devastating economic sanctions. The ultimate aim of the deal was to prevent Iran from building a nuclear bomb. Ever since the U.S. government’s unilateral withdrawal from the deal in 2018, Iran began to take incremental steps in violation of the limits of the agreement, trying to hold the deal together and working with the remaining members to compensate for the reinstatement of U.S. sanctions.

The IAEA has found itself caught up in the middle of this political turmoil. “The agency cannot solve the political problems with regard to Iran. Its job is to continue monitoring and verifying Iran’s commitments under the deal,” Nephew said. “Grossi is experienced, since he helped manage and devise the IAEA’s policy on Iran already when he was chief of cabinet under Amano.”

Indeed, the IAEA has confirmed that Iran has violated the deal in several ways. The agency said that Iran had surpassed the deal’s limits on its stockpile of enriched uranium and is also exceeding the allowable enrichment levels. Tehran insists it has the right to do this because of Washington’s withdrawal from the deal in 2018 and subsequent reimposition of sanctions. Yet Iran continues to work with the agency and allows regular inspections as foreseen under the nuclear deal.

A storage facility for low-enriched uranium run by the International Atomic Energy Agency is shedding new light on how another Iran standoff might be averted for future generations.

Furthermore, on Nov. 11, another point of friction opened up as it became public that the IAEA had detected uranium particles “at a location in Iran not declared to the agency.” The IAEA did not name the site in question, but it is understood that the agency took samples from a site in the Turquzabad district of Tehran, where Israel has alleged there was secret atomic activity before. “If this issue does not get resolved soon, Grossi may have to sound the alarm,” warned Gaukhar Mukhatzhanova, the director of international organizations and nonproliferation at the Vienna Center for Disarmament and Non-Proliferation.

When it comes to the IAEA’s basic role in monitoring the Iran deal, however, diplomats and experts do not expect a major policy shift under Grossi. Indeed, Grossi himself pledged that the IAEA would continue its so-called safeguards work, which includes verifying countries are using nuclear technology solely for peaceful purposes, in a “firm and fair way.” “An inspector is not a friend,” Grossi said during his first press conference. “He’s someone who comes and needs to ascertain the facts without bias, without agenda, in an objective and impartial way.”

Dealing with Iranian officials will be part of Grossi’s job. He already has experience, as he met Iranian officials during his time at the agency from 2010 to 2013. He also told reporters on Monday that he expected to travel to Iran in the “relatively near future” but did not give an exact date.

A first opportunity for an encounter might arise on Friday on the margins of the Joint Comprehensive Plan of Action’s Joint Commission meeting in Vienna. It consists of high officials or deputy foreign ministers from China, Russia, France, Germany, Britain, and Iran and regularly meets to discuss how to uphold the nuclear deal.

Apart from Iran, Grossi will also have to keep an eye on developments in North Korea. The IAEA inspectors were expelled from North Korea in 2009 after the so-called six-party talks fell apart. Pyongyang also withdrew from the Treaty on the Non-Proliferation of Nuclear Weapons in 2003 and from the safeguards agreement it had concluded with the IAEA. “I believe U.S. President Donald Trump and [North Korean] Chairman Kim Jong Un share the need for a win on this,” said Laura Rockwood, who worked for the IAEA for 28 years in several high-level positions and now is the director of the Open Nuclear Network. “I believe that in the medium term there is a chance for a political agreement.”

In the event that such an agreement is reached, the IAEA would be asked to send inspectors back into North Korea. For this purpose, Amano had established a team at the agency to prepare for the resumption of inspections. Grossi said that those preparations would be increased. “The agency needs to be ready,” he said. “The day we left North Korea was the day that we started to prepare our return.”

Hence, much of the change at the agency is expected to be more in terms of style than of substance. “The director-general is defined as chief administrative officer in the IAEA Statute. He actually has fairly limited degrees of freedom, as he is constrained by the Board of Governors and IAEA member states,” Rockwood said.

Member states not only set policy but also have a means of controlling the agency’s activities through the budget, which is set at 592 million euros, about $655 million, for 2020 to 2021. Grossi is thus in the hands of member states, and his autonomy is limited. Yet, previous directors-general have emphasized certain areas of the agency’s work. Under Amano, for example, the renovation of the nuclear applications laboratories in Seibersdorf, Austria, was launched. The laboratories are a unique feature in the U.N. and look at issues such as insect pest control, plant breeding, and soil and water management.

Grossi, for his part, has indicated that he wants to put more focus on how to use nuclear power to fight climate change. Rockwood also added that the director-general “can shape the way the agency is perceived by the public.” Indeed, the past has shown that previous directors-general have adopted different working styles. Mohamed ElBaradei, who served as IAEA director-general between 1997 and 2009, was known for his critical attitude toward the United States and for his outspoken views, for example regarding U.S. sanctions against Iran. He also did not share Washington’s belief in the existence of a revived nuclear weapons program in Iraq. Yukiya Amano, a skilled diplomat from Japan, was considered by many as ElBaradei’s opposite, as he adopted a very reserved, cautious, and careful working style. This included a very restricted attitude toward public statements and the media, and a stronger focus on working behind the scenes.

“I gather that Grossi is now prepared to state positions in a more forward-leaning manner again,” Nephew said. Grossi himself has said that he wants the agency to communicate more actively and in a more transparent way.

Experts and diplomats agree, however, that the most important challenge for an IAEA chief is to maintain a reputation for technical expertise, rather than political fealty. This point was underlined by Grossi himself as he took the oath of office on Monday, pledging to “regulate my conduct with the interest of the agency only in view, and not to seek or accept instructions in regard to the performance of my duties from any government or other authority.”

Stephanie Liechtenstein is a diplomatic correspondent and freelance journalist based in Vienna, Austria.

A storage facility for low-enriched uranium run by the International Atomic Energy Agency is shedding new light on how another Iran standoff might be averted for future generations.