Welcome to The View From There, where international writers and journalists based in Washington, D.C., talk about what’s making news in their home countries. Foreign Policy recently spoke to to Riada Asimovic Akyol, a Bosnian writer and journalist based in Washington whose work has appeared in the New York Times, the Atlantic, Al Jazeera, and Foreign Policy, among others.

On Tuesday, the Nobel Prize for Literature will be formally awarded to the Austrian writer Peter Handke, who has been accused of being an apologist for the genocidal Serbian regime of Slobodan Milosevic and of downplaying the ethnic cleansing of Bosniak Muslims and Croatians in the 1990s. The Swedish Academy’s decision to give the award to Handke sparked outrage, particularly in Kosovo and Bosnia and Herzegovina.

Asimovic Akyol spoke about the experience of genocide denial, her reaction to Handke’s receipt of the award, and how she thinks Bosnia can move forward with dignified resilience. This interview has been edited for clarity and brevity.

Foreign Policy: How did you feel when you learned that Handke had been given the award?

Riada Asimovic Akyol: Oh my God. I keep talking about this exhaustion, because there’s always something … If the Nobel prize committee gives this award, then it means that they’re complicit in genocide denial. They can’t claim to be naive. They’re part of that vision which denies that there was a genocide against Bosnian Muslims. … Then you end up asking yourself, so what will happen next? 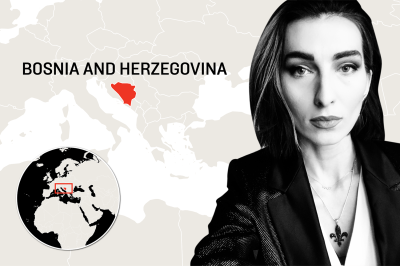 Riada Asimovic Akyol, a Bosnian journalist and writer based in Washington

The ideologies that led to the atrocities in the ’90s are very much alive still. Bosnia today with all the complications of the Dayton Accords [the agreements that ended the war in Bosnia] in terms of the way that the government is structured, [is] the most complicated system of governance in the world. … Dayton has solidified ethnonationalism and nationalist parties completely in the political structures, and this idea of a civic Bosnia is just so difficult to achieve as of now because it’s always about stirring the tension.

So, first you have to live every day with an unstable present, which is based on the past.

And then externally you have Europe, which has all sorts of problems. Everything that has kind of led to the rise of right-wing populist parties, and nationalists.

We are seeing the implications in Bosnia of the decision to stop the enlargement of the European Union in the region. Then a few weeks weeks ago we have the French president calling Bosnia a ticking bomb for jihadis. And then there’s massive unemployment, brain drain. There is political instability, there’s the issue of the migrant crisis in Bosnia. And then on top of all these economic and political vulnerabilities, wider European problems are being projected onto Muslims. We are being racialized and stereotyped as a very homogeneous entity.

FP: What do you think the impact will be, that the Nobel committee has given this prestigious award to someone accused of genocide denial?

FP: How have you dealt with this since you heard?

RAA: Learning, studying. At first I was shocked, surprised, but then I was no longer surprised because I was just sad and mad because the pieces of the puzzle kept on fitting into place in terms of the current atmosphere of anti-Muslim bias in Europe. The denial of our pain and our experience. But I also just needed to understand that, if this is what it is, okay, what are we going to do about it? And for me that meant going beyond just saying, “they don’t care about us,” but understanding what can we do besides continuing to share the truth. Because for some people, these are just numbers. But these are realities, these are pains, these are traumas, these are communities affected, these are lives, these are futures as well.

FP: In your view, how can Bosnians move forward after this?

RAA: This is a stain on the Nobel Prize organization. This cannot be a stain on us. It cannot take away that dignity. How do we get to the point of transforming the situation in this moment in history, again, into different new sort of power to recover or act?

While obviously I cannot speak for everyone, but after studying in more detail how dehumanization works, as well as politics, sociology, and psychology, I arrived at this term of “dignified resilience.” In my opinion, it seems to be the most constructive way forward, if we want to focus on the results. And I think that is, first of all, that we do everything we can to ensure that this horror never repeats in Bosnia-Herzegovina. … So that means, first of all, we need to reiterate that there these are established facts. This means that we need to continue writing about the genocide and to share stories from the war. But we also need to talk more about the fact that these lethal ideologies did inspire others. The horrors of the ’90s are still unfortunately thriving, not just in the Balkans, but they are inspiring others in now around the world. I’m referring to the Christchurch shooting, or even Anders Brevik [the Norwegian far-right extremist who killed 77 people in attacks in 2011].

Another part of the effort, I think, should be channeled into keeping the memory alive in a more organized way, which means maybe consciously investing in Srebrenica Memorial Center … the best way, in my opinion, is to transform this anger and frustration into power, to turn it into inspiration, to act against the denial of genocide or towards an action that is based on values that matter to us, towards justice.

FP: In journalism we always say that sunlight is the best disinfectant, we talk about speaking truth to power. But it sometimes feels that in this post-truth world, that facts just aren’t enough anymore. Do you think that stories, and I mean true, narrative stories about individuals, can be more powerful?

FP: What was the reaction among your Bosniak friends, when the Nobel committee made their announcement?

RAA: It’s not just Bosniaks, they are the majority in Bosnia, but it’s also very painful to just keep thinking about Bosnia as just Muslim Bosnia. Because Bosnia was always this beautiful, diverse community. There are also Bosnians who happen to be ethnically Serb or ethnically Croatian. One common thread I saw among people’s reactions was this exhaustion. But this exhaustion did not mean, “I can’t do it, I’m giving up.”

Some people prefer to not comment on this. Maybe that’s their way of dealing with it. Others have kept on to try and expose the shame of this decision, sometimes they use articles by the journalist Peter Maass who has made an extraordinary contribution in the past couple of weeks in his writing about this. … Some people in a very academic way try to approach this by writing pieces. Some try to shame the institution. Others have tried to share their stories. I’ve read an immense number of disastrously sad stories.

FP: Based on everything that you know, and that you’ve experienced, what do you feel like when you look at America nowadays, and the degree polarizing and at times dehumanizing language that we see used?

RAA: I read recently that dehumanization spreads like a virus. It’s scary to see how people are not aware how easily a switch happens. … We have to understand it, and then we have to talk about it, and then we have to continuously on a daily basis understand the dangers of it, and speak up against it in micro and macro context. So, the way things are today does not have to be the way they are tomorrow. That can be in positive or negative way. It’s fragile.

In America, one thing that I have always believed in is the strength of institutions. And again, I keep learning about how much they can be bent, or not, and I can only hope that the strength of norms and institutions of liberal democracy here persists in terms of ensuring rights for all and freedoms for all.

‘In Russia We Have Total Nepotism’

A conversation with Karina Orlova, the Washington correspondent for the Echo of Moscow.

A conversation with Ani Chkhikvadze, a Georgian journalist based in Washington.

For Bosnian Women, No Justice—and No Seats

In the Balkan wars, women were targets. In postwar governments, they’ve been pushed out of sight.