BAGHLAN PROVINCE, Afghanistan—When Sayed Kareem hears about peace talks—any kind of peace talks—he becomes angry. “Where is the peace? Where is the will for it? I don’t see it, and I don’t believe in it,” the middle-aged man said in a recent interview in his village while gunshots rang out a few miles away.

The short route between Pul-e-Khumri, Baghlan’s provincial capital, and the so-called factory area, which is named after a local sugar plant, has become the site of regular skirmishes between Afghan army soldiers and Taliban insurgents. “This is daily life here. We are killing each other, also during these so-called peace talks,” Kareem snorted.

Baghlan province, in Afghanistan’s north, remains one of the most insecure regions of the country. The road from the capital and the factory area is dotted by the presence of freshly burned checkpoints. “The Taliban are hiding themselves behind the trees. They are there in this very moment, and they start shooting whenever they want,” said Ahmad Agha, a local resident. He underlined that the route is mainly used by civilians. Thus, they are the main targets.

For many in Baghlan, it is clear that nothing will change in their province. Not even after a possible restart of Washington’s peace negotiations with the Taliban, as U.S. President Donald Trump declared during this Thanksgiving visit last month to Bagram Air Field. Also, the Taliban hinted that they were ready to resume talks with the Americans. Trump’s surprise visit was his first to Afghanistan since becoming president and came a week after a prisoner swap between Washington and Kabul.

“All of these peace talks seemed to be between the Taliban and the Americans. So they would stop the fighting between U.S. troops and insurgents. But here we have Afghans killing each other, sometimes even close friends and relatives. How will this be stopped?” said Agha in Baghlan.

The Americans have all but given up. As revealed this week in the “Afghanistan Papers,” a history of the 18-year Afghan War that was compiled by the Office of the Special Inspector General for Afghanistan Reconstruction—and exposed by the Washington Post—both Republican and Democratic administrations going back to George W. Bush have misrepresented how badly the war was going, how poorly U.S. resources were used, and how rampant corruption really is in Afghanistan. And that U.S.-led war followed only a brief interlude of Taliban rule—interrupted by 9/11—that ended a previous 23-year civil war. 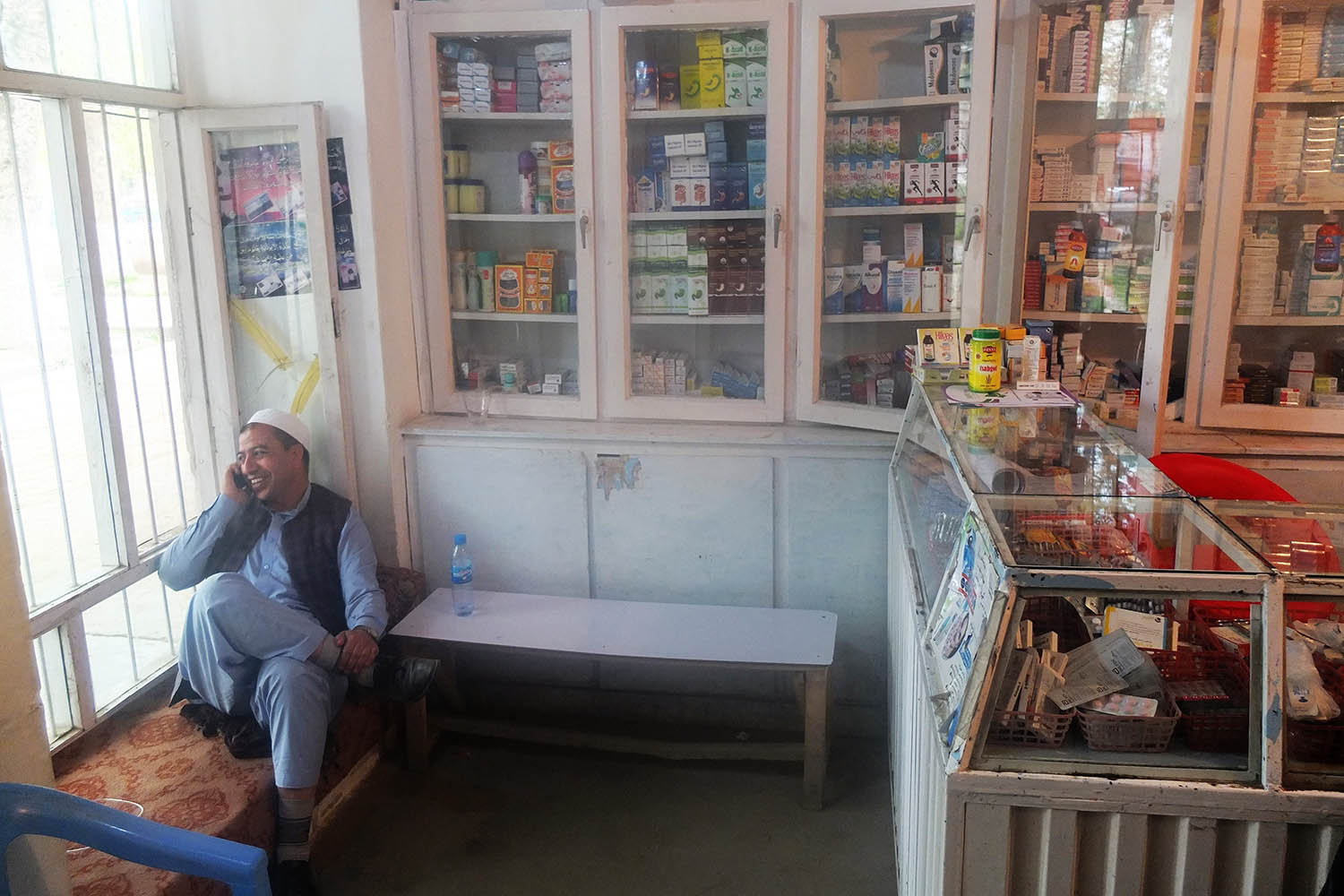 Sayed Kareem sits in a pharmacy shop in Baghlan’s factory area in April. “I just returned from a funeral. This country just knows death, and it will not change,” he said.Emran Feroz for Foreign Policy

Ordinary Afghans see this reality up close every day. Indeed one reason the Taliban remain somewhat popular in remote and rural areas is that, as brutal as it often was, the Islamist group supplied the only experience of stability and peace known by most Afghans now alive.

Baghlan can be considered as a case study for the whole Afghan War—a war that has torn families and friendships apart. The question how this can be solved through a sole deal with the Americans remains unanswered. At the end, most victims of the war are Afghans themselves, which probably would not change after a troop withdrawal. “There are people, friends or even brothers, who started to hate and kill each other just because one man becomes a soldier while the other turns into a Talib. How can you fix this by making a deal with the Americans? It’s Afghans killing each other, I haven’t ever seen a dead American,” said Ali Hazara, a mechanic.

In many local hospitals, Taliban fighters and Afghan soldiers often lie next to each other. “They want to continue their fight while they bleed out. It’s totally crazy,” a local medic who wants to remain unnamed told me. Although many people do not have sympathy for the Kabul government, they believe that its previous exclusion in the peace is problematic, to say the least. A large number of Baghlan’s Taliban fighters came from neighboring Kunduz province, whose capital fell to the insurgents in 2015. The temporary fall of Kunduz was a shock for both President Ashraf Ghani’s government and the international community. However, many of Baghlan’s Taliban are also deeply local, and a lot of them are young men who grew up in poverty, chaos, and desperation.

After Trump’s visit, the role of the Afghan government in peace talks remains unclear. Actually, Ghani’s administration did not play any significant role at all when negotiation rounds took place between U.S. Special Envoy Zalmay Khalilzad and the Taliban delegation in Qatar. Many believe that this will also not change in the near future. 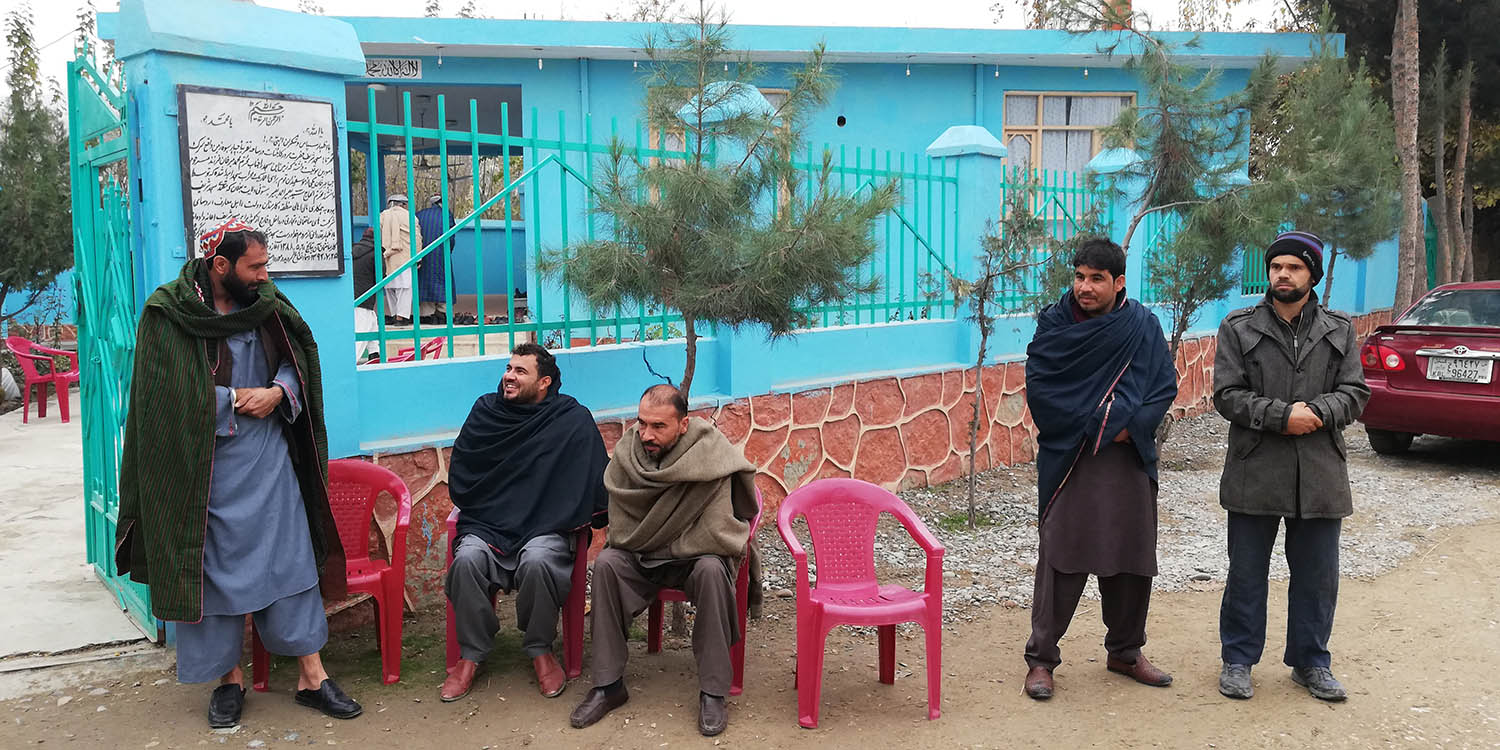 Local men gather in front of a mosque near the factory area of Baghlan on Nov. 26. Emran Feroz for Foreign Policy

“The Kabul government will continue to not play any important role in peace talks. Ghani tried a lot to change this but as it seems that at the moment, Trump is solely focusing on his very own political agenda,” said Zakir Jalaly, a Kabul-based political analyst.

According to Jalaly, Trump’s recent speech in Bagram clearly hinted that Ghani’s government has become irrelevant in the peace process. In early September, the U.S. president canceled talks with the Afghan insurgents via Twitter. However, many observers believed that Washington had to reopen talks very soon. “Trump wanted to put some pressure on the Taliban. Nevertheless, he knew that this ‘endless’ war could just be ended through negotiations,” Jalaly said.

When Trump arrived at Bagram, he was visited by the Afghan president, who gave a speech in which he praised Trump’s achievements, especially the killing of Islamic State leader Abu Bakr al-Baghdadi in Syria. While doing so, Ghani was pictured alone in the middle of a throng of American soldiers, an image many Afghans disliked and that appeared to conform all too well to the Taliban portrayal of Ghani as a tool of the Americans.

Endless Conflict in Afghanistan Is Driving a Mental Health Crisis

“He did not look like our president. I don’t know much about politics, but what I do know is that the leader of a sovereign state should not act like that. He should not grin next to the American president and his soldiers, without any of his ministers or advisors,” said Mohammad Saleem, a merchant from Kabul.

But also on the political level, Ghani faced criticism for his behavior. “In the context of the presidential elections, it’s obvious that President Ghani had to stroke Trump’s ego to get him on his side. But at what cost did he do that? He became the guest of his guest in his own land, and he reinforced the Taliban narrative that he is just a puppet,” said Ershad Ahmadi, who served as deputy foreign minister in the era of President Hamid Karzai.

According to Ahmadi, the chances are lower that the Taliban will face Ghani on equal terms after the Bagram scenario. “Why should they talk with him now?” he asked.

Correction, Dec. 11, 2019: The photo of Sayed Kareem was taken this April. An earlier version of this article gave the incorrect date.

Endless Conflict in Afghanistan Is Driving a Mental Health Crisis