India Is Betraying Its Founding Fathers

Welcome to Foreign Policy’s weekly South Asia Brief. The highlights this week: Nationwide protests erupt over India’s controversial citizenship law, the United States is expected to announce a troop drawdown in Afghanistan, and the United States and India meet to talk defense.

Welcome to Foreign Policy’s weekly South Asia Brief. The highlights this week: Nationwide protests erupt over India’s controversial citizenship law, the United States is expected to announce a troop drawdown in Afghanistan, and the United States and India meet to talk defense.

The world’s largest democracy has erupted in protest. From Kolkata and Guwahati in the east to Mumbai in the west, and from New Delhi in the north to Chennai and Hyderabad in the south, tens of thousands of protesters across India are voicing their opposition to a controversial new citizenship law. At least five people have been killed during the protests. In New Delhi, protesters have been on the streets for three straight days.

The Citizenship Amendment Act, which passed both houses of parliament last week and then was signed into law by India’s president, allows persecuted minorities a fast-track route to Indian citizenship. The law applies to immigrants from nearby Afghanistan, Pakistan, and Bangladesh who are Hindu, Christian, Sikh, Jain, Zoroastrian, or Buddhist. Muslims, however, are not included—even if they are Ahmadis, members of a sect of Islam that Pakistan considers heretical. Nor does the law apply to other persecuted minorities in the region, such as Tamil Hindus in Sri Lanka, Rohingya Muslims in Myanmar, or Uighur Muslims in China.

The bigger plan. Let’s be clear: The law isn’t truly about protecting the region’s religious minorities. Instead, it challenges India’s secularism by making religion part of the basis for citizenship. While Muslims are not mentioned by name, they are highlighted by their obvious exclusion.

The top leaders of the ruling Bharatiya Janata Party (BJP) deny that the bill discriminates against Muslims. But BJP President Amit Shah has repeatedly made clear his desire to crack down on Muslim immigrants. “A Bharatiya Janata Party government will pick up infiltrators one by one and throw them into the Bay of Bengal,” he said in April, referring to Muslim immigrants from Bangladesh. Speaking in the state of Jharkhand earlier this month, he repeated himself: “I assure you that before the national election in 2024, I will throw them all out.”

How do you throw them out? First, you have to identify them. That’s where the National Register of Citizens comes in. In September, 1.9 million residents of northeastern Assam state learned their names were excluded from the register because they didn’t have documentation proving their citizenship. (It is common for Indians to lack official paperwork, as FP reported at the time.) Many of those excluded from Assam’s register were Hindus. But with the new citizenship act, Hindus can potentially claim they are immigrants from Afghanistan, Bangladesh, or Pakistan and gain a route to citizenship. Muslims, on the other hand, could be at risk of being declared foreigners if they can’t produce documentation.

Shah has said he will extend the National Register of Citizens from Assam to the entire country. There’s every reason to believe he will succeed: After all, a nationwide citizens’ register was part of the BJP’s campaign manifesto. Since his reelection in May, Prime Minister Narendra Modi has relentlessly ticked off items on his social agenda, including revoking Kashmir’s autonomous status. All of this, critics allege, is part of the BJP’s master plan: to turn India into a Hindu state, reducing the status of the country’s nearly 200 million Muslims.

What’s next? Petitions challenging the new citizenship act have already been filed in India’s Supreme Court. But it may take months before hearings begin, and it’s anyone’s guess which way the court may rule. The bigger question is how long protesters will risk their lives and livelihoods to demonstrate against the law.

Shah and Modi are unlikely to cower in the face of dissent. Meanwhile, authorities have shut down the internet in parts of West Bengal, Uttar Pradesh, Assam, Meghalaya, Arunachal Pradesh, and Tripura, in a bid to make it harder for protesters to assemble. Kashmir has not had full internet services since Aug. 4. But while protesters have generated national and international attention, the BJP’s moves are likely popular among its supporters. After all, Modi isn’t doing anything unexpected: He is fulfilling the campaign promises that won him a second term in a landslide.

Has he gone too far this time? The answer to that question may well determine whether India will remain the secular republic envisioned by its founding fathers—or if it casts itself in the image of its neighbor and becomes a Hindu Pakistan.

Out of Afghanistan. Just a week after the Washington Post published the “Afghanistan Papers,” detailing how the U.S. government misled the public about the progress of the war effort, U.S. Sen. Lindsey Graham said Monday that President Donald Trump would announce a U.S. troop drawdown in the Afghanistan later this week. There are around 12,000 troops there now, and the number could shrink to 8,600. The statement followed a tumultuous week that also saw the resuspension of peace talks with the Taliban after the militant group attacked a military base in eastern Afghanistan, killing at least 23 soldiers.

The slow Belt and Road. As Pakistan’s economy sputters, it has slashed imports, lowered the value of the rupee, and decreased spending on development. That last move is particularly irksome to China, the Financial Times reports. China is frustrated by the slow progress of many of its Belt and Road infrastructure projects in Pakistan. Apparently under pressure to get things back on track, Pakistan recently named a retired Army figure, Asim Saleem Bajwa, to chair the Chinese-funded projects.

2 + 2 = Security? On Wednesday, representatives from India and the United States will gather in Washington for the second “2+2” India-U.S. ministerial dialogue. Indian External Affairs Minister Subrahmanyam Jaishankar and Defense Minister Rajnath Singh will discuss a number of topics with their U.S. counterparts, Secretary of State Mike Pompeo and Defense Secretary Mark Esper, focusing especially on defense cooperation.

India’s new citizenship law will fast-track citizenship for religious minority refugees from Afghanistan, Pakistan, and Bangladesh. Which country has the largest Hindu population?

A) Afghanistan
B) Bangladesh
C) Pakistan

Data protection—but not really. India has proposed a law that would restrict how companies can access and manage the data of regular citizens. Sound too good to be true? It is. The proposed Personal Data Protection Bill would give any government agency the ability to access peoples’ personal data, citing national security. The winter session of parliament ends on Friday, so debate on the proposal will likely wait for the spring.

The war before. December marks the 48th anniversary of the surrender of the West Pakistani army to Indian and Bengali independence forces in the 1971. The conflict is variously remembered as a symbolic step on the way to great power status (in India), a humiliating defeat better brushed under the rug and countered with rising defense spending (in Pakistan), or an important step on the path to independent nationhood (in Bangladesh). 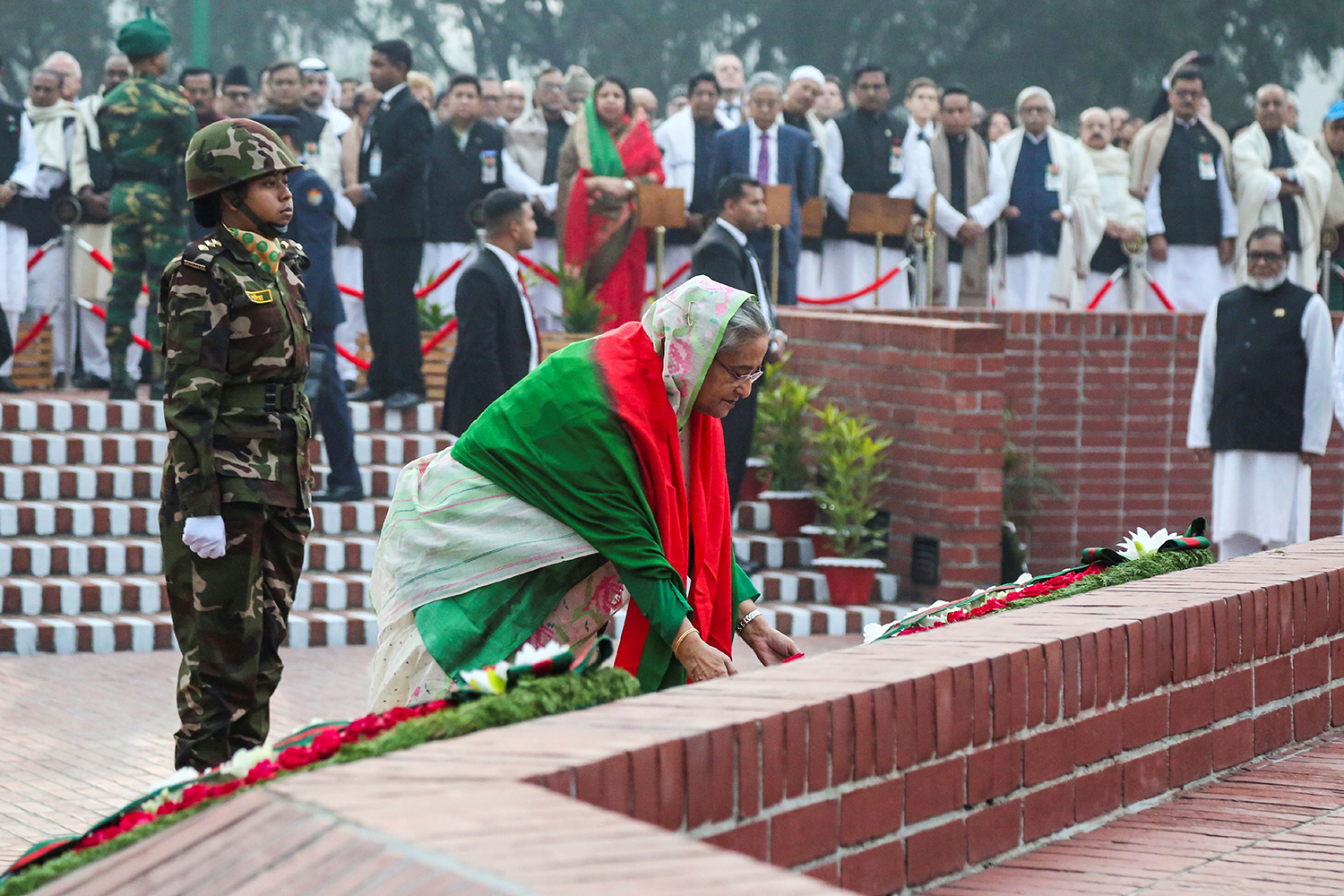 The tensions at the heart of the conflict still simmer today. In India, many of the 10 million refugees from Bangladesh now find themselves at the heart of the citizenship controversy in Assam. Since 1971, Pakistan has never really been at peace with its larger neighbor. And Bangladesh has struggled to overcome the political, economic, and societal damage wrought by its political status before independence. Although it has surged ahead in terms of economic growth, social problems remain rife.

Pakistan may be a larger country, with a population of 197 million, but smaller Bangladesh (165 million) still has a much larger Hindu population of around 14.3 million, compared to Pakistan’s 3.6 million. Afghanistan is home to fewer than 5,000 Hindus.

NEW FOR SUBSCRIBERS: Want to read more on this topic or region? Click + to receive email alerts when new stories are published on Human Rights, India, South Asia