If You Think Kashmir Was Turbulent in 2019, Wait for Next Year

The region exploded onto the front page in 2019. In 2020, the stories could get far grimmer.

Ever since the partition of British India in 1947, Kashmir—caught between the two successor nations of India and Pakistan—has remained unsettled. In the Indian-controlled part of the region, an at-times violent (and harshly suppressed) separatist movement has waxed and waned for decades. On the Pakistani side, meanwhile, parts of the territory have been used as a staging ground for terrorist attacks across the border. For the most part, though, the region’s tensions have flown under the radar in international coverage—perhaps mostly because they’ve lasted so long. But 2019 changed all that.

Ever since the partition of British India in 1947, Kashmir—caught between the two successor nations of India and Pakistan—has remained unsettled. In the Indian-controlled part of the region, an at-times violent (and harshly suppressed) separatist movement has waxed and waned for decades. On the Pakistani side, meanwhile, parts of the territory have been used as a staging ground for terrorist attacks across the border. For the most part, though, the region’s tensions have flown under the radar in international coverage—perhaps mostly because they’ve lasted so long. But 2019 changed all that.

In August this year, newly reelected Indian Prime Minister Narendra Modi announced the repeal of Article 370 from the Indian Constitution and launched Kashmir into the headlines for months to follow. Article 370 had given Indian-administered Kashmir some autonomy, including the right to craft limited local policy and to deny outsiders the right to acquire land there, which many Muslim Kashmiris saw as protection against Hindus from the rest of India moving to the region, changing its demographics, and undermining its push for independence.

Under other circumstances, Modi’s announcement might have led to deadly protests or militant attacks. But it was coupled with a complete communications blackout—only now being partially rolled back—and strict curfew that kept Kashmir on lockdown. Outside of Kashmir, of course, the news sparked numerous protests. Many Modi supporters cheered the decision, which he had promised as part of his reelection campaign earlier this year. Detractors, meanwhile, saw it as part of an increasingly dangerous drift toward Hindu nationalism—a way to whip up support at a time when India’s economy is slowing. And around the world, activists and others decried the communications shutdown and curfews, a bandwagon Pakistani Prime Minister Imran Khan jumped on to condemn his biggest rival on the world stage.

Four months later, the spotlight has drifted back off of Kashmir. In India, Modi has turned to other controversial pro-Hindu policies, including, most recently, the introduction of a new citizenship law that gives some religious minority refugees (but not Muslims) a fast-track to Indian citizenship. In Pakistan, tensions between the two countries that looked like they could spill into war over the spring and summer seem to have died down. And with so much other news around the world—impeachment, trade wars, the Afghanistan Papers, and so on—it is easy to see why Kashmir is no longer daily news.

And yet, the ongoing internet blackout in Indian-administered Kashmir is now the longest ever imposed in a democracy. Scores of pro-independence leaders have been locked up. And even more civilians have been thrown in jail on dubious pretexts. Beyond the human rights implications, it seems clear that the situation could easily spark another explosion of pro-independence protest, violence, and even acts of terrorism—all of which would surely bring Kashmir back to the fore.

Until then, Foreign Policy’s top five reads on Kashmir offer the history, context, and analysis to help you understand what happened last year—and what could come in the next.

1. India Is the World’s Leader in Internet Shutdowns

Hours after the Modi government shut down mobile and broadband service in Indian-administered Kashmir, an infographic by Foreign Policy’s C.K. Hickey revealed that New Delhi had shut down the internet in India 159 times over the past three years—more than Pakistan, Iraq, Syria, Ethiopia, and Iran combined.

In his clear explanation of what Kashmir’s special status had entailed—in particular, the way it protected the region’s Muslim-majority status—New Delhi academic Idris Bhat shows how everything including the region’s political parties, its schools, its civil service, and its townships could change in the years ahead. 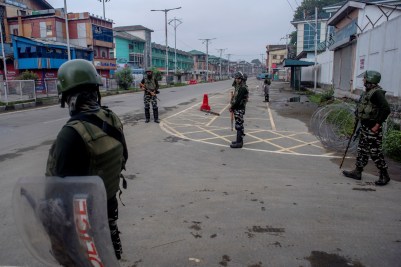 3. The World Is Reaping the Chaos the British Empire Sowed

The writer Amy Hawkins pinpoints the beginnings of today’s crisis in the dissolution of the British Empire, which is why, she argues, Britain could do more today to recognize its role in the conflict and do what it can to make amends.

4. In Kashmir, Modi Is Failing Both Muslims and Hindus

Part of New Delhi’s justification for ending Kashmir’s special status was to protect the region’s Hindu minority, including the Pandits, many of whom were pushed out in the 1990s and whose return to their hometowns Modi’s Bharatiya Janata Party has long promised. Yet with its repression in Kashmir, writes the journalist Rahul Pandita, the government has done more to divide the region’s various ethnic and religious groups than to heal them.

5. In the Line of Fire Along Kashmir’s Line of Control

It is rare for journalists to be able to report near the Line of Control, the de facto border that separates Indian-administered Kashmir from the Pakistani side. But in November, two Srinagar-based journalists, Muddasir Ali and Majid Maqbool, were able to visit several villages on the Indian side, where they met with locals terrified of ongoing shelling between the two nuclear-armed neighbors.