Why the Berlin Wall Still Matters

Fragments of the wall have become museum pieces. But with the rise of extremist parties in Germany, the debate over the barrier’s legacy is anything but history.

The Newseum in Washington, D.C.—which closed in December—had long featured a BT-9, the iconic and infamous guard tower that loomed over the death strip behind the Berlin Wall, its wardens watching for any potential escapees from the East or provocations from the West.

Relatively few people made it across to West Berlin by traversing the death strip and overcoming the wall. Border guards were sworn to shoot at would-be escapees. Some did. Most never had to. The numbers are disputed, but most historians believe that around 200 people were killed during escape attempts during the lifespan of the Berlin Wall, from 1961 to 1989. 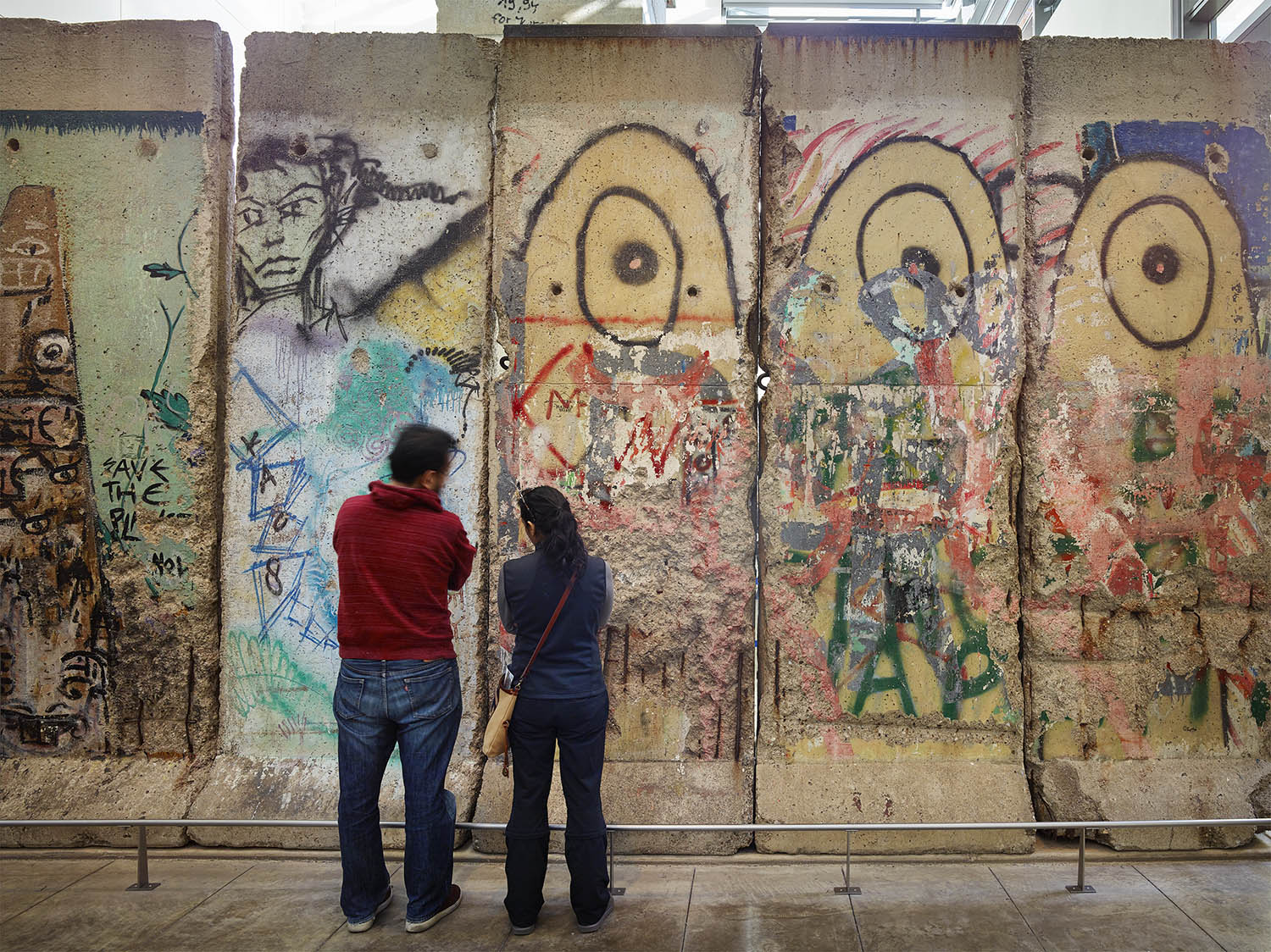 Visitors view a section of the Berlin Wall at the Newseum in December.

The guard tower cast a long shadow, literally and figuratively. It was a totem of authority and security, warning against escape attempts and telegraphing to the world that the East German authorities were prepared to defend a border that most of the world saw as illegitimate and immoral. Symbolism was always important to the East German regime, and the Berlin Wall, along with its ominous towers, represented a particularly challenging public relations problem.

The East German authorities called it the antifaschistischer Schutzwall, or anti-fascist protective barrier. In other words, they were eager to convey that it wasn’t meant to keep the East Germans in but rather to keep those land-grabbing fascists in the West out.

Of course, when the Berlin Wall was brought down on Nov. 9, 1989, not by the West but rather by a peaceful revolution initiated by East Germans themselves, the jig was up, finally and completely.

But that wasn’t the end of the road for the BT-9 guard tower.

Due to the modular and standardized construction of the concrete block tower, which meant that it could be manufactured off-site and installed within a day, the BT-9 could also be just as quickly disassembled and transported.

Similarly, the fourth and final iteration of the Berlin Wall was modular and standard—the 2.6-ton segments were designed to be moved into place in haste and with incredible precision.

Whereas other, older portions of the Berlin Wall couldn’t be moved and had to be knocked down to get them out of the way, the fourth generation of the Berlin Wall, which was unveiled in 1975 alongside the BT-9, is now on display all over the world.

The Berlin Wall’s segments are perfectly weighted so that a crane can lift them, as if they were designed for a future as portable monuments. Ten such segments owned by the Wende Museum are presently installed across from the Los Angeles County Museum of Art, surrounded by those whom East German officials would have called Klassenfeind, or class enemies. For its part, the Newseum had eight segments, which, along with the BT-9 tower, formed a kind of monument of oppression.

And that’s the thing with both the fourth generation of the Berlin Wall and the BT-9 tower. They started their lives as intimidating structures that symbolized separation, surveillance, and repression. While they’ve never changed in form, their meaning became something very different after 1989. 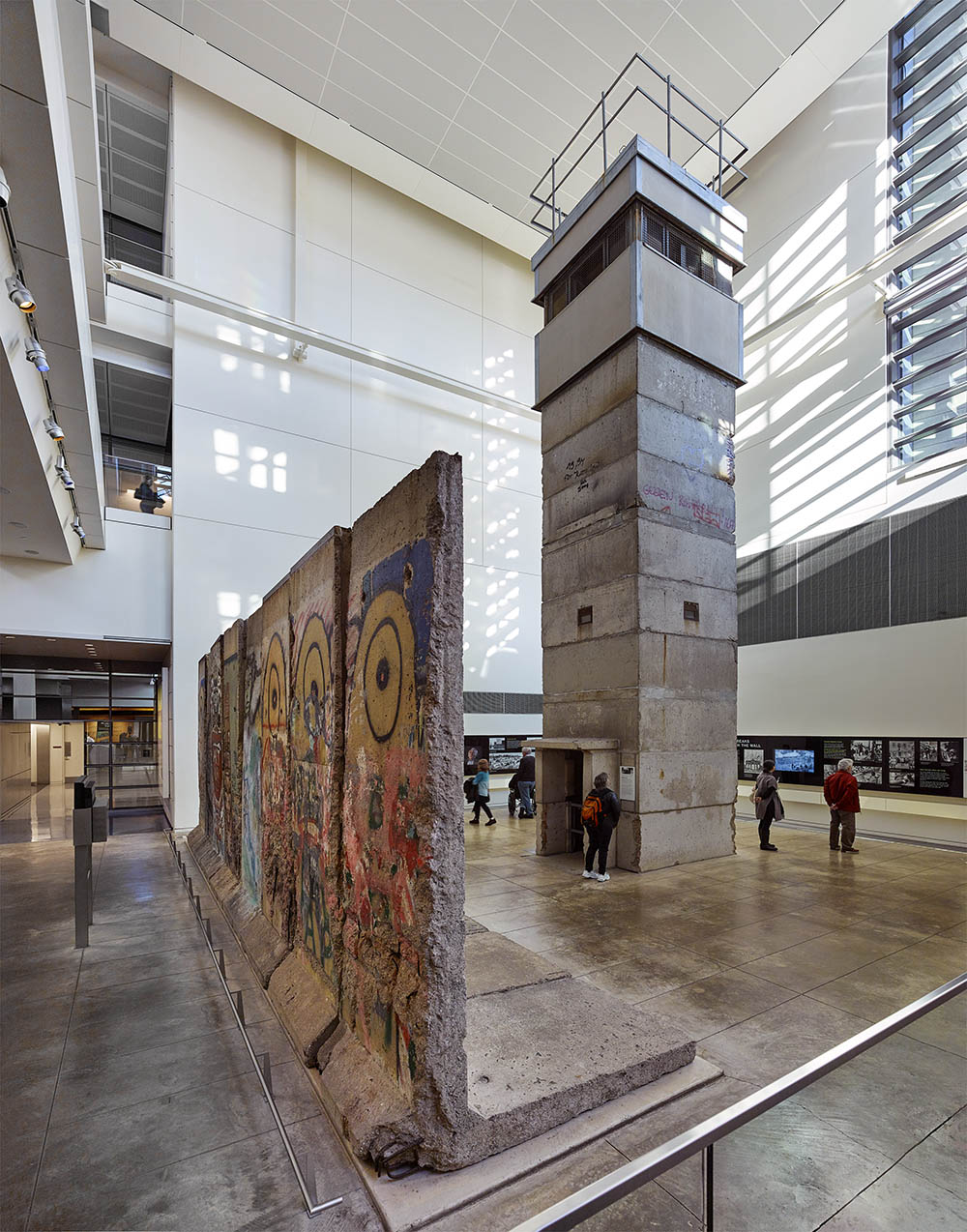 The Berlin Wall exhibit at the Newseum in December.

In the last 30 years since the fall of the Berlin Wall, these structures have been presented as physical witnesses to authoritarianism.

But there’s a catch. Authoritarianism never disappeared, and now new despots are wreaking political havoc throughout Central and Eastern Europe.

The last 30 years have not been smooth sailing for German reunification, and particularly in the last few years, the narrative of the West’s joyful victory seems to have become a relic in its own right.

Economic and social issues plague the relationship between the former East and West Germany. The rise of grievance-fueled parties in what used to be East Germany has occurred partly in response to what is perceived as western Germans’ arrogance and attacks on the identity of eastern Germans, who, after all, were not all Stasi informers. All of these tensions have forced a new, more complicated narrative about the wall and its meaning.

The Newseum closed for good on Dec. 31, and, along with it, the BT-9 tower will need to find a new home. It won’t be difficult to move—at least physically. But the future of its meaning is already in flux.

Justin Jampol is the founder and executive director of the Wende Museum in Culver City, California, and host of the television show Lost Secrets on Travel Channel. Twitter: @wendemuseum