Foreign Policy’s five best reads on a city in chaos.

Hong Kong has been seized by protests for seven months, and the movement shows few signs of slowing down. The city, once a British colony, was handed over to the People’s Republic of China in 1997. The terms of the agreement stated that Hong Kong would retain its own political and legal systems for 50 years—essentially functioning as a separate country, with its own border controls, but under the ultimate authority of Beijing. This “one country, two systems” approach was intended as a precursor to the hoped-for reabsorption of a democratic Taiwan, a perennial thorn in the side of the Chinese Communist Party.

There’s still plenty of time until 2047, when the city’s independence will disappear entirely. But Beijing’s shadow is already looming over Hong Kong, as locals fear the rapid erosion of their rights. One of those fears, a controversial extradition bill, was the initial trigger for this year’s unrest. The act, supposedly intended to allow the extradition of serious criminals to other countries, was widely seen as a backdoor way of targeting dissidents for deportation to the mainland. These fears were worsened by the repeated kidnapping of Hong Kong citizens, especially booksellers, who sold volumes that have been banned in the mainland by the Chinese security services.

The protests soon took on a wider aspect. Hong Kong is an unusual example of rights without democracy; although the city has a long-standing independent judiciary and well-established freedom of speech and protest, it has never had full democracy. The British set up a partial system before leaving, one maintained by the Chinese authorities. Under it, Hong Kongers have a limited ability to vote for their own local assembly, but the bulk of seats are controlled by what are known as “functional constituencies”—small groups of elites heavily under Beijing’s thumb.

The chief executive position is also chosen by a group of just 1,200 people and signed off on by Beijing. The current chief executive, Carrie Lam, has been an utter failure in her role, with her popularity numbers plummeting to record lows—but Chinese President Xi Jinping has kept her in office, and there’s no straightforward method for her removal. Behind all this, too, is a deeper crisis of identity. While a decade ago as many as 30 percent of Hong Kongers under age 30 identified as Chinese, that figure is now just 3.1 percent.

Although the extradition bill has now been formally withdrawn, protesters’ demands have broadened, now mostly focusing around police violence. The reputation of the Hong Kong Police Force, once termed “Asia’s finest,” has plummeted as their brutal response to initially peaceful protests left Hong Kongers deeply alienated. The five demands of protesters now focus on investigation of police brutality, pardons for those charged with rioting, and the introduction of full democracy into the city. This last is the greatest sticking point for Beijing, which has no desire to create more trouble for itself and is actively hostile to any polity, like Taiwan, that combines a Chinese inheritance and democracy.

Foreign Policy has been following the tumult since the start. Here are five pieces that sum up the city’s turbulent year.

1. The End of Hong Kong Is Almost Here

Writing before the protests had peaked with numbers in the millions, the journalist Hilton Yip predicted the long struggle to come and the damage the extradition bill would do. “Most potently for Hong Kongers, it will mean the erasure of the sense of the city as something different and special—a threat to the values that the regions’ residents have come to hold dear,” he writes. At the core of his argument was the city’s special sense of self. “Hong Kong might not be a democracy,” Yip argues, “… but its people deeply value the rule of law established under the British and still modeled on an independent court system unknown on the mainland.”

The responsibility of Hong Kong’s former colonial owner in creating the conditions for today’s protests was a recurrent theme this year. Milia Hau argued in June that Britain’s failure to establish democracy and properly protect Hong Kong citizens under international law gave the Communist Party the edge. “Naturally and understandably, British nationals (overseas) want British citizenship. In a United Kingdom already torn by immigration issues, handing citizenship to hundreds of thousands of people, however strong the moral case, is a political impossibility,” Hau writes. But, she writes, there are still measures the U.K. could take to help its former subjects. Elsewhere, the activist Jack Hazlewood looked to the legacy of colonial policing in Hong Kong, while the British Chinese writer Amy Hawkins linked together Kashmir and Hong Kong as failures of empire. 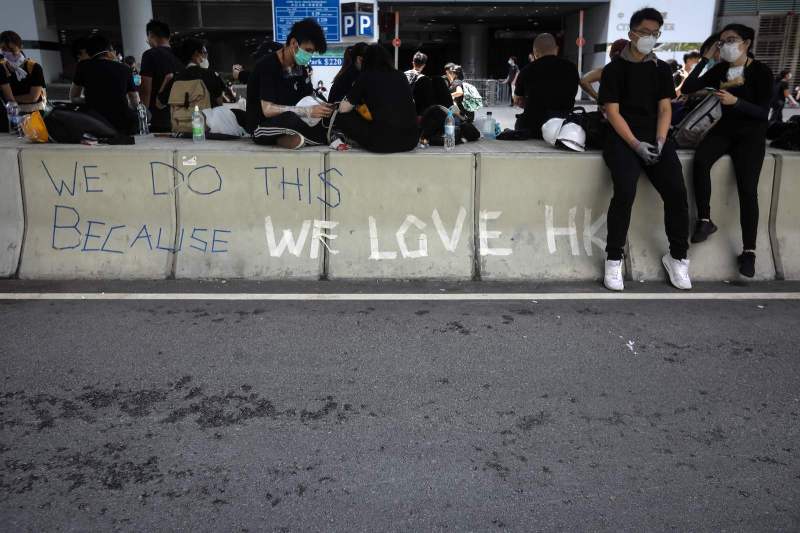 Protesters rest on a road divide outside the Legislative Council in Hong Kong after a flag-raising ceremony to mark the 22nd anniversary of the city’s handover from Britain to China on July 1.Vivek Prakash/AFP/Getty Images

In a beautifully written personal account, Hong Konger Karen Cheung describes how the protests stirred the soul—and how potentially risky that was. “There are so many others making smaller sacrifices, so much taking place away from the cameras that will never be immortalized in tomorrow’s dailies,” she writes. But “Only when oppression is fought on a day-to-day basis—with Hong Kongers exercising the few voting rights they are given, and teachers, lawyers, parents, journalists, and others all playing their part in educating the next generation—can the movement sustain itself.”

Mainlanders have not, for the most part, shown any solidarity with Hong Kongers. Chinese propaganda has been highly successful at depicting the protesters as dangerous rioters and secessionists, supposedly funded and trained by Western intelligence. One aspect has been particularly telling, the novelist Jeannette Ng writes: the implicit patriarchy of the propaganda.

“It is this specific sexist stereotype that is being drawn on when Hong Kong is portrayed as a shrill, high-maintenance mistress constantly talking about her ex. This overlays misogyny onto a nationalism that reduces the complexities of its own people into a single solitary, bratty dependent.”

Hong Kong municipal elections in November dealt a crushing blow to the pro-Beijing camp after pan-democratic candidates won a sweeping victory in the only genuinely democratic vote Hong Kongers are permitted to participate in. Chinese state media was completely unprepared for the defeat, Foreign Policy’s senior editor (and a veteran of mainland media) James Palmer writes. Reporters in Beijing, steeped in their own misinformation, had only prepared copy reporting a victory for the government side. “The misplaced confidence in Beijing’s victory points to a worrying problem; at high levels within the CCP, officials believe their own propaganda about Hong Kong,” Palmer writes. “That’s a frightening prospect for both governance in China and for the future of the city, especially as the system struggles to come up with political excuses for a cataclysmic failure.”