The coming year will either bring new U.S.-Russia talks or a renewed arms race.

A Russian S-400 Triumph air defense missile system is paraded through Red Square during a rehearsal for the Victory Day military parade in Moscow on May 6, 2018.Kirill Kudryavtsev/AFP/Getty Images

During a year-end visit to the White House on Dec. 10, Russian Foreign Minister Sergei Lavrov made a little-reported overture to U.S. President Donald Trump. He wanted Trump to begin talks aimed at preventing the New Strategic Arms Reduction Treaty (New START) from expiring in February 2021.

The last U.S.-Russian nuclear arms pact still in force, New START took effect in 2011 and reduced the deadly U.S. and Russian arsenals to 1,365 and 1,461 “deployed” warheads, respectively, a level not seen since the 1960s. Yet the Trump administration has so far rebuffed efforts by Lavrov to restart START, saying that no further such agreements could be reached without including China and possibly other nuclear powers. In effect, in another echo of the 1960s, we’re back to arguing about the shape of the table.

In the 20th century, it took nearly 30 years and trillions of dollars of Cold War military spending to convince the United States and Soviet Union that adding to the size and capability of their respective nuclear arsenals was probably a poor way to achieve national security. When talks finally began in 1969—aimed modestly at limiting rather than reversing the buildup—the two sides had acquired the expensive and ultimately useless ability to murder each other’s citizenry, and that of much of the rest of the world, many times over. At a peak in 1986, the Soviet Union had 40,000 nuclear warheads and the United States just about 23,000. 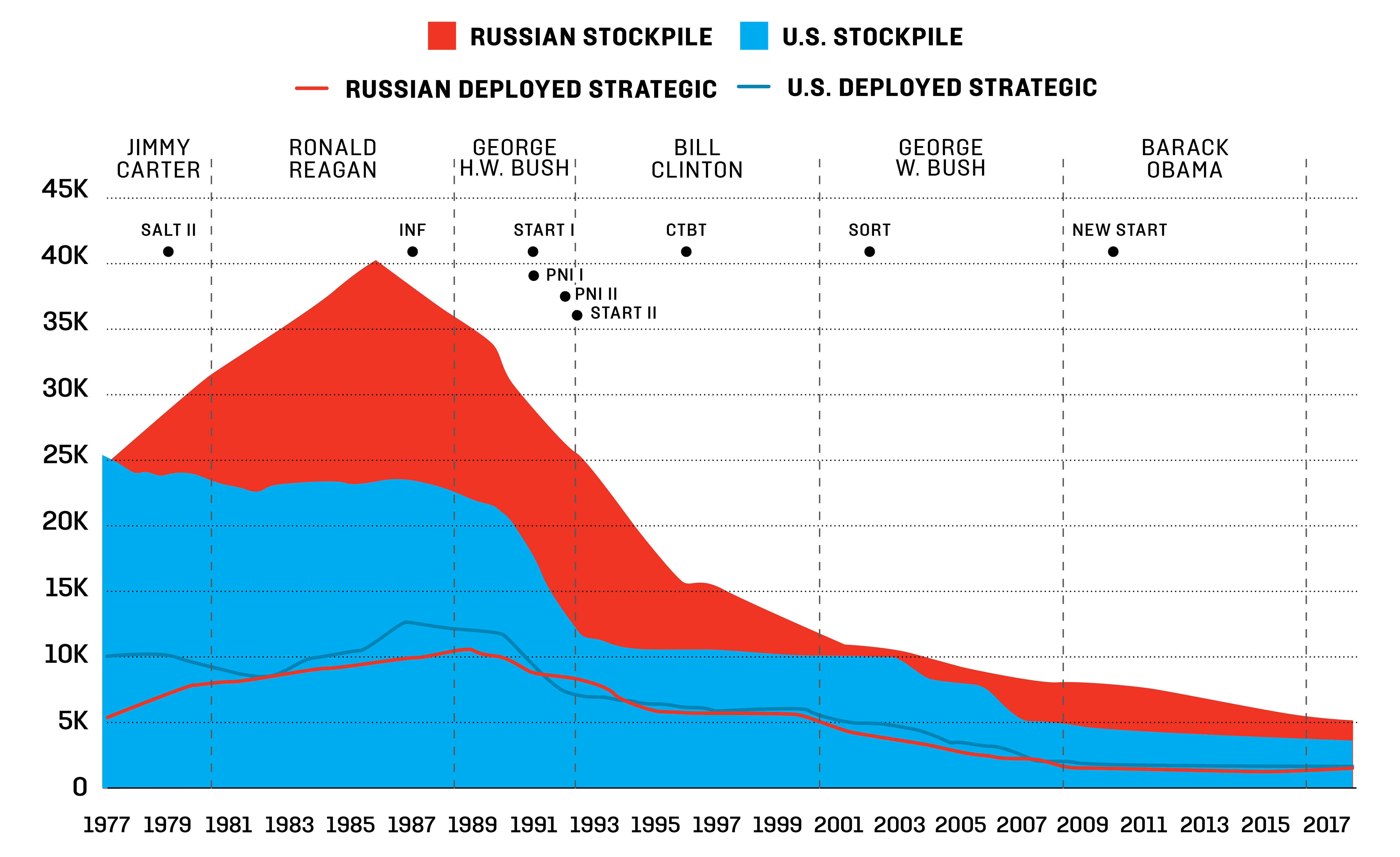 No matter the ideological lens through which one views subsequent history, one fact is indisputable: The world of 2018, when both countries reached the reduced number of warheads they had agreed upon in New START, was a much safer place than the world of 1986. But it looks like things will worsen in 2020, possibly setting the stage for a decade marked by a new, much more dangerous arms race.

The United States and Russia, despite decades of policy resets, institutional and cultural exchanges, immigration and intermarriage, bilateral trade and investment, as well as some clear mutual strategic interests, have fallen once again into familiar patterns.

After a period of cooperation that flirted with friendship in the early 1990s, the relationship frayed over such issues as NATO expansion, U.S. and Western interventions in the Balkans and the Middle East, Russia’s reassertion of its zone of influence in former Soviet lands, energy politics, and Moscow’s drift away from market and democratic principles. Step by step, Moscow has devolved from strategic partner to rival to outright enemy of the United States.

“It’s almost impossible to imagine,” said Bill Ury, co-founder of the Harvard Negotiation Project, who has helped U.S. presidents since Ronald Reagan in complex nuclear arms reduction negotiations. “It’s almost we’ve been asleep, like Rip van Winkle, you know, and we wake up and realize we’re back in the same situation again.” Once more, in other words, as New START expires, the United States is contemplating an arms race with a nuclear rival.

How is it that the specter of competition with Russia—a country many had written off as a “commodity play,” as Ian Bremmer once put it—has once again risen to the fore? In interviews for a new documentary I am co-producing with dozens of experts and policymakers, including former Soviet leader Mikhail Gorbachev; former U.S. Secretaries of State George P. Shultz and Madeleine Albright; former Russian Foreign Minister Igor Ivanov; the head of Russia’s Council of Foreign and Defense Policy, Sergei Karaganov; and poltiical scientists such as William Taubman and Robert Legvold, none had a good answer.

Arms limitation talks, once a major strategic goal, have become an afterthought—the clearest indicator of the sorry state of U.S.-Russian relations.

Political scientist Andrei Kortunov, who runs the Russian International Affairs Council, put it this way: “Mistakes have been made on both sides. But the biggest mistake of all is that neither side will admit that. It’s become acceptable in the current atmosphere to blame it all on the other guy.” Doing so, of course, is madness. It has meant relations spiraling out of control, as when Russian President Vladimir Putin rolled U.S. President Barack Obama in Syria. Or as in the case of Trump, who may or may not survive impeachment, and who surely rues the day he so casually invited Russian hackers to go after his 2016 presidential opponent.

Arms limitation talks, once a major strategic goal, have become an afterthought—the clearest indicator of the sorry state of U.S.-Russian relations. Gorbachev, retired and battling illness in a kind of internal Russian exile, was alternately angry and despondent at the thought of where the two countries are today, and what they have lost along the way. “One of the most important things is to meet, understand the situation, and find ways out of it,” he said. “This is what’s most important. To rattle each other, stir up fear—that’s nonsense when both sides have so many weapons. One nuclear exchange at that time could have ended life on our planet.”

And by the end of next year, the last treaty meant to dampen the possibility of such exchanges will fall apart.

In the coming year, serious progress toward a more stable, transparent U.S.-Russian relationship appears to be out of the question. On the Russian side, a series of successful disruptions of U.S. and Western goals—in Georgia and Ukraine over NATO and EU membership bids, and the intervention in Syria—have created a situation where a climbdown by Putin’s government is highly unlikely. And on the U.S. side, at best, the deterioration in relations will continue as the clock ticks down on the Trump administration, whether that clock runs for another year or another five.

In the meantime, enormous sums are being mustered in both countries to develop and deploy a new generation of nuclear weaponry, together with new generation of missile and radar capabilities that may well lead to a new arms race.

The signs of a coming race already appear, clear as day, in recent U.S. defense budgets, where spending on hypersonic missile technology meant to close a technological gap that has opened with the Russians shot to $2.6 billion in 2019. It is slated to rise to $5 billion annually by 2022, according to Congressional Budget Office forecasts. The omens are also visible in Putin’s grandiose pronouncement during a much-publicized speech in February in which he unveiled Russia’s new weapons capabilities, including nuclear-powered torpedoes; hypersonic, Earth-orbiting nuclear missiles; and a new generation of radar that will reputedly make stealth aircraft visible to Russian warplanes.

The coming year will be the time to either stop the spiral or let things spin out of control. Left to their own devices, the military and security bureaucracies of both nations invariably prefer to fight fire with fire, even when the fire is nuclear-powered. It is up to other bureaucracies to intervene, but no serious effort to open talks aimed at limiting this new arms race has been undertaken.

Instead, the United States has moved in the opposite direction of late, withdrawing from the landmark Intermediate-Range Nuclear Forces Treaty Gorbachev and Reagan struck in 1987 that prohibited particularly destabilizing “small nukes” in the European theater. And on the other geopolitical issues that bedevil the relationship, from cyber espionage to Syria policy to global energy supplies, both countries seem intent on poking the other in the eye.

“Reagan and Gorbachev put it best when they said a nuclear war cannot be won, therefore a nuclear war cannot be fought,” Siegfried Hecker, former director of the Los Alamos nuclear laboratory, told me. Today, he noted, the United States forestalls arms control talks by insisting other nuclear powers be involved—a demand almost certain to prevent talks from getting started. And Russians surely have their own demands, including talks on conventional forces, on missile defense, and the militarization of space. “We don’t quite know how to deal with that. What it requires is getting back together and saying, ‘Let’s talk about strategic stability,’ not just talk about ‘What’s the next reduction in nuclear weapons?’”

Doing that requires leaders willing to expend political capital on peace rather than tough guy posturing. Reagan and Gorbachev had that capital in spades. Putin and Trump lack it entirely.

Michael Moran is an author, documentarian, and commentator on global affairs and a senior executive at Microshare, a global Smart Buildings data intelligence and sustainability firm.

NEW FOR SUBSCRIBERS: Want to read more on this topic or region? Click + to receive email alerts when new stories are published on United States, Russia

Will Biden and al-Kadhimi Only Produce Platitudes on Iraq?

The Minsk Group Is Meaningless