2020 Could be Niger’s Year of Reckoning

The country is home to one of the largest deployments of U.S. military personnel in Africa and is a linchpin of regional stability—but the coming year could throw all that into turmoil. 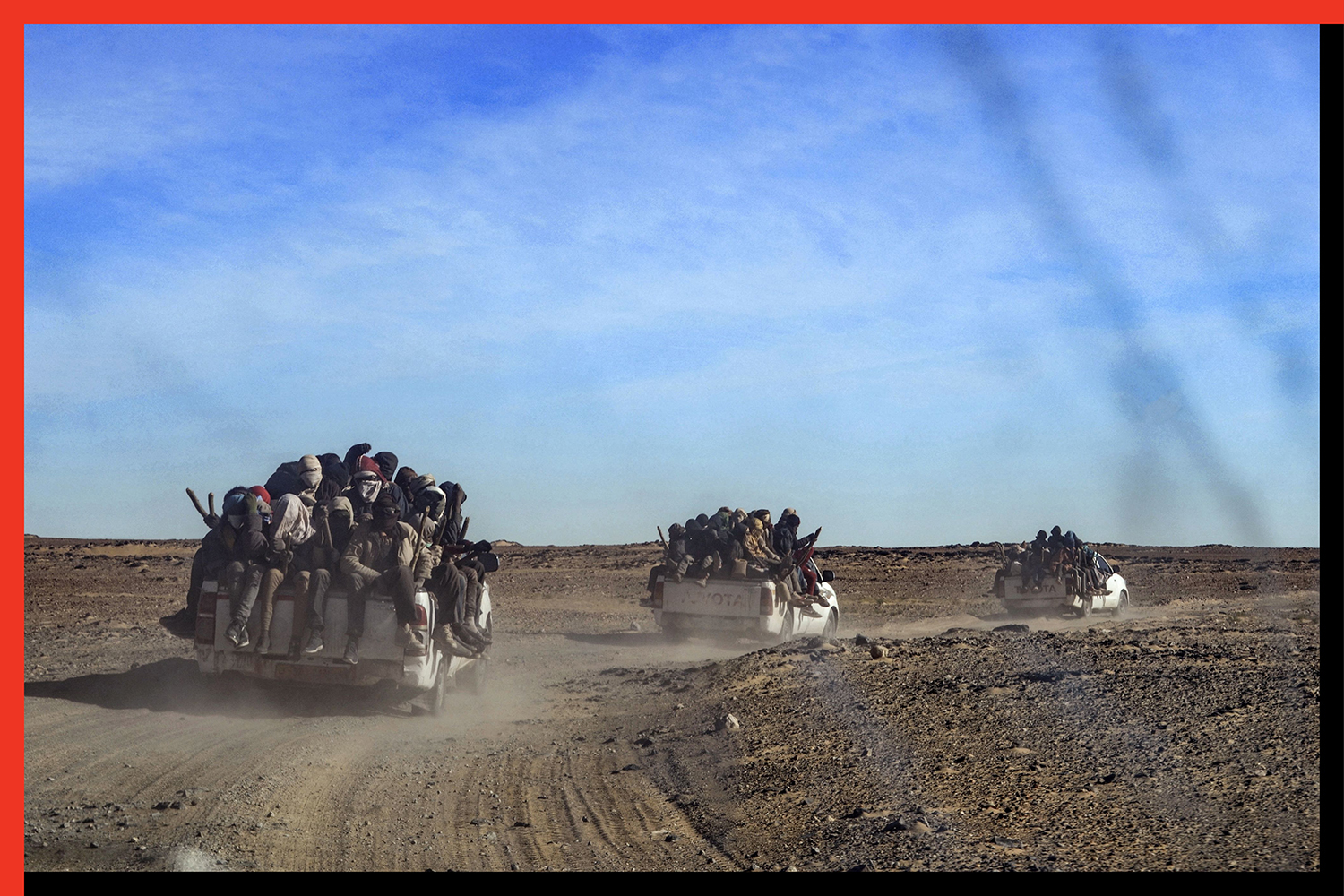 A group of migrant men, mainly from Niger and Nigeria, sit in the back of a pickup truck during a journey across northern Niger toward the Libyan border post of Qatrun on Jan. 15. Souleymane Ag Anara/AFP/Getty Images

“189 out of 189,” the World Food Program staffer declared as we sped through Niger’s notoriously sparse, dry landscape. The tenor of his voice was slow and thoughtful, like a doctor reviewing a complicated medical chart. “189 out of 189.”

In fact, the number is a prognosis of sorts—and not a good one. It is Niger’s ranking on the Human Development Index, an annual report produced by the United Nations that ranks countries on indicators such as life expectancy, education levels, and per capita income. In Niger’s case, the formula puts the country dead last, behind even such chronically insecure conflict zones as South Sudan and the Central African Republic.

Although Niger’s Human Development Index ranking has long been cause for concern, fears are beginning to mount that things could soon get much worse for the people living there, despite the United States investing more than $300 million in the country since 2017. Over the next year, a deadly wave of conflict sweeping across the Sahel could find its way into Niger, home to the second-largest deployment of U.S. military personnel in Africa and a linchpin of stability in the region.

The United States has already seen the costs of instability in Niger. Two years ago, Islamist fighters ambushed and killed four U.S. soldiers, four Nigerien troops, and an interpreter outside the village of Tongo Tongo. It was the U.S. military’s deadliest day in Africa since the Battle of Mogadishu, nearly 25 years earlier.

The United States has already seen the costs of instability in Niger.

The Tongo Tongo tragedy was one of the early warning signs of the coming volatility in West Africa. In November, U.S. Secretary of State Mike Pompeo said that, with the Islamic State’s caliphate mostly abolished in the Middle East, the Sahel is becoming the “preferred area of focus” in the global fight against the organization. The U.N. seems to share his concern.

“It’s the last relatively stable country in the region,” we were told by local U.N. staff during an October visit to Niger’s capital, Niamey, and the city of Maradi, approximately 30 miles from the border with Nigeria. “If we lose Niger, there’s no telling what will happen.”

One doesn’t have to imagine just how bad things can get.

To Niger’s west, turmoil swirls in Mali as the country suffers from increasingly violent ethnic tensions and an ongoing spate of terrorist attacks carried out by the Islamic State in the Greater Sahara and other radical jihadis. In November, 24 Malian soldiers were killed by extremists while conducting a joint operation along the Mali-Niger border.

In Burkina Faso, which like Niger had long been tranquil, the beginnings of a massive humanitarian crisis are already underway. The United Nations recently reported that over 500,000 people have been forcibly displaced from their homes since the beginning of 2019 as extremists linked with al Qaeda and the Islamic State carry out brazen attacks in a calculated effort to expand their influence in the Sahel.

In fragile Niger, any one of these elements could lead to a crisis. Added together, they could create an all-out disaster.

That’s why, in September, the U.N.’s World Food Program (WFP) declared a Level 3 emergency for Mali, Niger, and Burkina Faso. The designation is the highest emergency classification in the U.N. system and signals to nongovernmental organizations, partner governments, and private corporations that WFP, the world’s largest humanitarian organization, does not have the resources it needs to fully respond to such a complex and evolving situation.

That’s not to say the U.N. isn’t trying. Since 2018, WFP has been focused on enhancing resilience through investments in agricultural and pastoral productivity. That includes partnering to construct roads, plant trees, and revitalize overgrazed, drought-ridden lands so they can once again be used to grow crops. In Maradi, we saw it for ourselves. Land that had been dust just a few years ago was now bearing sorghum, millet, and watermelons thanks to simple, yet groundbreaking new irrigation techniques. The U.N. and others have also launched programs to incentivize locals to prioritize education and, with the United States, has worked on efforts to demobilize, rehabilitate, and reintegrate low-level terrorists. This month, they will be reintegrating the first round of some 240 former combatants who have spent upward of two years going through the demobilization process.

These projects and the Nigerien government’s clear-eyed outlook are helping keep the country from the brink of catastrophe, but Niger’s major challenges cannot be fixed quickly. Indicators at the heart of the Human Development Index—education and poverty reduction—are generational challenges that require focused, long-term investments. But most of all, they demand an environment where successes can be compounded. With violent conflict on the rise and climate change jeopardizing livelihoods in new and unpredictable ways, there is little room to shore up the development gains the country and international organizations worked painstakingly to achieve. It’s hard to rebuild a house, they say, when your living room is on fire.

And time is not on Niger’s side. In November, the U.N. announced that the humanitarian crisis in the Sahel was growing and that more than 860,000 people in the region had already fled their homes. This sort of mass migration will make aid organizations’ jobs much more difficult, creating new local tensions and putting vulnerable refugees and internally displaced persons in situations that are more costly and complicated to resolve.

Such tensions may lead to new outbreaks of intercommunal violence, further exacerbate the country’s already fraught food insecurity situation, and, most dangerously, propagate the type of impulsive instability that radical jihadis thrive on. If that’s allowed to continue unchecked, the Sahel’s forgotten crisis won’t be forgotten much longer—and it won’t just be the Sahel that’s feeling its impact.

That’s why planting the seeds of stability and opportunity now is so important. If the work is successful, most outside observers will never know it happened. If it isn’t, however, the Sahel will continue its ongoing collapse, and Niger’s perilous place at the bottom of the Human Development Index could be cemented for the foreseeable future.

Micah Spangler is the director of advocacy and humanitarian affairs at the United Nations Foundation.

Jordie Hannum is the senior director of U.S.-U.N. relations at the United Nations Foundation.