The Afghanistan Problem That Won’t Go Away

Even now, 18 years in, there is no clear way out for the United States.

President Donald Trump’s campaign in Afghanistan over the past year to end the United States’ longest-running war is enough to give the Afghans whiplash.

In September 2018, Trump appointed Zalmay Khalilzad—an Afghan American diplomat who has served as U.S. ambassador to Afghanistan, Iraq, and the United Nations—as special representative for Afghanistan reconciliation. The president charged the envoy with helping him fulfill a signature election promise: extricating thousands of U.S. troops from an 18-year-long war that few in Washington believed could be won.

The effort resulted in nine rounds of direct talks between the United States and the Taliban, and it raised the prospect that an Islamic movement notorious for harboring Osama bin Laden and executing women in public for so-called moral crimes would regain the political power it lost during the U.S. invasion.

The talks neared their endgame this September, when Khalilzad announced he had an agreement in principle with the Taliban: the phased withdrawal of 14,000 U.S. troops over 16 months in exchange for a commitment from the Taliban to prevent terrorists from using Afghan territory for attacks against the United States. All it needed was the support of the U.S. president and some arm-twisting to pressure Afghan President Ashraf Ghani to offer his grudging endorsement of a power-sharing deal that would likely weaken his presidency.

The pact proved hugely unpopular with the Afghan government, which had been largely sidelined in the talks; key U.S. Republicans, including Sen. Lindsey Graham, a critical Trump ally; and Trump’s then-National Security Advisor John Bolton, who felt the Taliban could not be trusted to hold up their side of the bargain.

But Trump, eager to notch a foreign-policy victory on the eve of an election year, was on board… until he wasn’t. Trump initially backed Khalilzad’s plan and made preparations to invite the Taliban to a signing ceremony at Camp David on the anniversary of al Qaeda’s 9/11 attack on New York and Washington, D.C. But in an abrupt reversal, Trump announced he was calling off meetings, citing a Taliban attack that resulted in the death of one U.S. service member and eleven other people.

Less than three months later, Trump paid an unannounced Thanksgiving visit to Bagram Air Base in Afghanistan to greet American soldiers and to open the door to continue talks with the Taliban. In the meantime, Trump appears to be planning to announce the withdrawal of 4,000 U.S. troops, a decision that could signal to the Taliban that they may be able to wait out a president who has staked his reelection on bringing U.S. troops home from the United States’ so-called endless wars.

Foreign Policy is rounding up five articles that best reflect the challenges facing Afghans as their future is hashed out by others, and the legacy the United States. will leave behind if it does leave.

1. Afghanistan’s Last Jew Gets Ready for the Taliban—Again

Kabul’s last Jewish holdout, Zabulon Simentov, has been jailed and beaten by Taliban militants. In this profile by Emran Feroz, Simentov anticipates their return with a mix of dread and hope that the Islamic movement will have moderated its ways and will return the Torah that was taken from his synagogue during the Taliban reign of power.

2. Endless Conflict in Afghanistan is Driving a Mental Health Crisis

A U.S. withdrawal from Afghanistan will leave behind a population whose psyches remain scarred as witnesses of America’s longest war. As the United States and the Taliban prepare to resume talks, Sohrab Azad tabulates the costs the war has inflicted on Afghans’ mental health. No matter the outcome of a peace deal, the “collective war trauma will continue to haunt the next generations of Afghans if it goes unaddressed.” 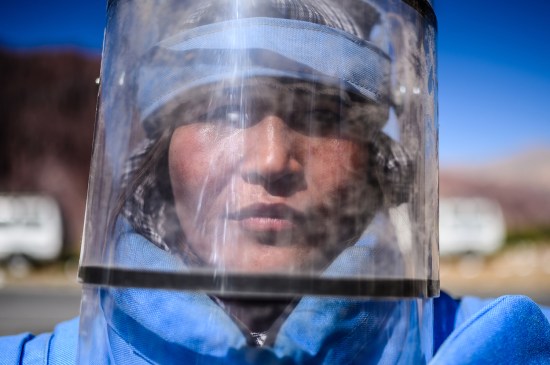 Marfat in her protective helmet in Bamiyan on Sept. 18. Kern Hendricks for Foreign Policy

3. Meet the Afghan Women Taking Their Country Back—One Land Mine at a Time

The wisdom of the U.S. overthrow of the Taliban 18 years ago has come into question with revelations that successive Democratic and Republican administrations misled the American public. But the fall has provided unexpected opportunities for women. Kern Hendricks tells the story of 39 Afghan women who make up their country’s first all-female demining team.

4. How the CIA Aims to Keep a Footprint in Afghanistan

The CIA trained an Afghan unit, the Khost Protection Force, to root out al Qaeda and Taliban elements. Stefanie Glinski explores the fate of this CIA proxy force in the event of a U.S. drawdown. “These forces could be a wild card that determines the extent of Taliban influence in post-NATO Afghanistan,” Glinski writes.

Foreign Policy columnist Stephen M. Walt weighs in on the Washington Post’s “Afghan Papers.” “Despite all that upbeat testimony from people at the top, evidence that the U.S. effort in Afghanistan was not going well was in plain sight all along,” Walt writes. “It was obvious to anyone who understood that a distant great power cannot win a counterinsurgency campaign when its adversary can disengage at will or retreat to safe havens in Pakistan, and when its local partner (the Afghan government) is hopelessly corrupt and dysfunctional.”