Even as right-wing forces took hold in many places around the world, grassroots democracy proved itself alive and well.

By Keith Johnson, a senior staff writer at Foreign Policy.

The year 2019 will be remembered as the year of protests. From Hong Kong to the Middle East and North Africa to Europe and Latin America, the street was—often literally—on fire. It was a reminder that even as anti-democratic and right-wing forces take hold in many places around the world, grassroots democracy is alive and well. In some cases, popular protests are still ongoing, such as in Hong Kong, with no clear end in sight. In others, protesters seem to have prevailed, such as in Chile, where what began as anger at subway fare hikes may end with a new, more progressive constitution. In still others, whether Sudan or Algeria, protests may have ousted unpopular leaders, but they haven’t been able to effect a root-and-branch change in government.

A surprising number of protests started with popular anger over seemingly small things: fuel price hikes in a number of cases, from Iran to Ecuador, or fare hikes in Chile, or a WhatsApp tax in Lebanon. In other cases, such as Hong Kong and Indonesia, protesters took to the streets after governments announced new laws that threatened civil liberties. But in all cases, popular ire, once unleashed, found much bigger targets: corruption, political dysfunction, and a general discontent with economic stewardship that seems to offer little promise for a lost generation.

The protests in Hong Kong have captured the world’s attention, partly because of the widespread participation of most sectors of Hong Kong society, partly because of the brutal police response, and always with the shadow of another Tiananmen Square lingering in the background. Indonesia’s protests in September and October against deeply unpopular new laws show just how fragile Indonesian democracy may yet be, 20 years after the fall of the Suharto regime. In the Middle East, protests from Iraq to Lebanon highlighted popular discontent with Iran and its regional proxies.

In Latin America, there was plenty of kindling for unrest, whether brewing discontent with an ossified political class in Bolivia, rampant corruption in Ecuador, or disillusion with the once-vaunted Chilean model of economic development. Europe, too, felt the tremors—from protesters in yellow vests opposing tax hikes in France to anti-corruption protests in the Balkans to separatist discontent in Catalonia to massive marches in London against Britain’s yet-to-be-consummated exit from the European Union.

Here are some of the most memorable Foreign Policy articles on the protests that shaped the world in 2019—and will yet for years to come.

1. The Arab Spring Is Not Over Yet

Written in early March, just as flickers of unrest lit up Algeria and before Egyptian protesters even took to the streets, this piece shows how many of the protests across the Middle East and North Africa can be seen as aftershocks of the great upheavals of 2011. Though the Arab Spring’s early promises seemed largely betrayed across the region, Mansour writes, that revolutionary spirit never went away—because the root causes of discontent never went away.

“Indeed, Arabs continue to build on the first wave of the Arab uprisings in 2011. Peaceful mass mobilization remains the only choice available to continue the struggle for democracy in the region,” Mansour writes. “The counterrevolution in the Arab world will continue to lose power and will eventually collapse under the weight of these movements.”

2. Iran is Losing the Middle East, Protests in Lebanon and Iraq Show

Iraq, like Lebanon, saw massive protests break out this fall with a common denominator: popular discontent with Iran’s influence in those countries. In Iraq, protesters took aim at Iran’s influence over the government of Prime Minister Adil Abdul-Mahdi, eventually forcing his resignation on Dec. 1. In Lebanon, grassroots demonstrations against a proposed hike in telecoms fees turned into a referendum on the failed promises of the 2005 Cedar Revolution and Iran’s continued influence, via Hezbollah, on the country. Iran may have won political influence in its neighbors, Ghaddar writes, but it has lost the street—as evidenced later by massive protests inside Iran against the regime itself.

“Across the region, the same story is unfolding,” Ghaddar writes. “Wherever Iran wins, mayhem prevails.” 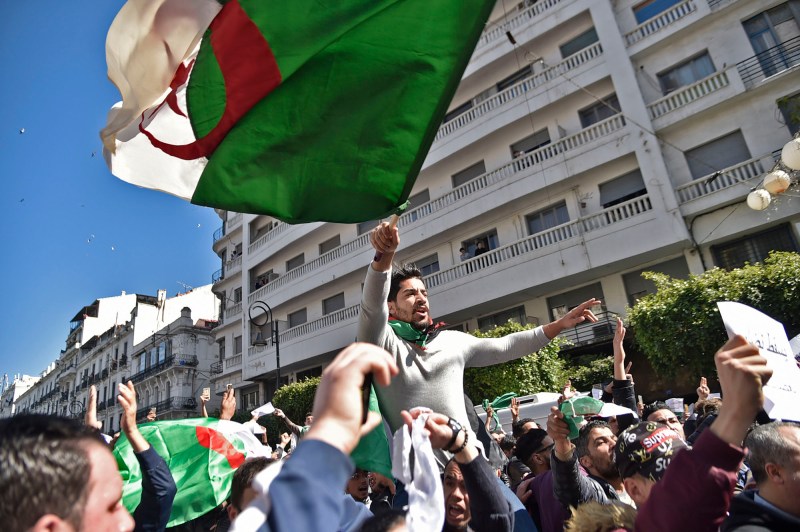 Algerians chant slogans and wave national flags during a rally against ailing President Abdelaziz Bouteflika’s bid for a fifth term in the capital Algiers on March 1. (Ryad Kramdi/AFP/Getty Images)

3. Trump to Arab Protesters: I Stand With Your Rulers, Not You

Traditionally, U.S. presidents at least pay lip service to pro-democracy protesters fighting oppressive regimes, even if U.S. foreign policy often coddles many of those same regimes’ leaders. But for U.S. President Donald Trump, there’s not even lip service: Whether waxing nostalgic about China’s violent crackdown on Tiananmen Square students, or waxing ambivalent about the Hong Kong protests, or praising Egyptian President Abdel Fattah al-Sisi as “my favorite dictator,” Trump has ditched even the pretense (and much of the funding) for promoting democracy overseas.

“Trump’s apparent disregard for democratic yearnings in the Middle East may come as no surprise for a president that has questioned the legitimacy of key democratic institutions that have challenged him at home, including the courts, the press, and Congress,” Lynch writes.

4. Beijing is Shooting Its Own Foot in Hong Kong

The months-long protests in Hong Kong have been among the most-covered of all popular demonstrations this year, though the ultimate fate of the islanders in their struggle against Beijing’s bear hug remains unknown. But one thing is becoming increasingly clear: Beijing’s hysterical demonization of the protesters as violent thugs, coupled with its crackdown on any mention of the protests by businesses or visitors, has been an own goal for China, ultimately making the case for economic decoupling that American China hawks have been pushing for years. China’s hopes of economic and strategic hegemony are now encountering serious pushback—in part because Beijing has shown its true colors.

“It may be that Chinese ambitions founder on the rocky shores of Hong Kong island,” Dapiran writes.

5. From Model to Muddle: Chile’s Sad Slide into Upheaval

Chile wasn’t the only Latin American country that saw massive protests this year, but it was perhaps the biggest surprise. Long viewed as an island of stability in a sea of dysfunction, simmering discontent with the country’s failure to turn economic growth into welfare for most people boiled over on the smallest of pretexts. Now, Chileans seek a final reckoning with its past—and with the downsides of its own economic “miracle,” which created one of the most unequal countries in the world.

“With the slow buildup of inequality, Chile has gone from model to muddle,” Langman writes.