A weekly digest of national security, defense, and cybersecurity news from reporters Jack Detsch and Robbie Gramer. Look out for special editions of this newsletter Feb. 16-19 as SitRep heads to Germany to give you behind-the-scenes looks and breaking news from The Munich Security Conference, one of the most consequential gatherings of world leaders.
Sign Up
✓ Signed Up Unsubscribe

The Security Stories That Shaped 2019, Part One

By Lara Seligman and Robbie Gramer, a diplomacy and national security reporter at Foreign Policy.

Welcome to Foreign Policy’s Security Brief. This week and next, we’re  bringing you a special edition: A roundup of the top ten stories from 2019. Here are the first five.

If you would like to receive Security Brief in your inbox every Monday, please sign up here.

Welcome to Foreign Policy’s Security Brief. This week and next, we’re  bringing you a special edition: A roundup of the top ten stories from 2019. Here are the first five.

If you would like to receive Security Brief in your inbox every Monday, please sign up here.

U.S. support to the Syrian Democratic Forces has long angered Turkey, a NATO ally which views the Kurdish-led group as a terrorist threat. This year, senior U.S. officials tried to develop a mechanism that would appease Ankara, guarantee the Kurds’ safety, and allow the coalition to continue its operations against the Islamic State.

But in a fateful October phone call, Turkish President Recep Tayyip Erdogan repeated his longtime threat to launch a cross-border invasion. This time Trump capitulated, moving a handful of U.S. troops so the Turks could begin the assault against the Kurds.

For the second time, Trump’s advisors urged the president to reverse course. He eventually did so, ordering roughly 600 troops to stay in the Deir Ezzor region to guard the area’s rich oil reserves and continue fighting ISIS. The region has stabilized, but at great humanitarian cost: Hundreds have been killed and roughly 200,000 people were displaced.

Trump’s efforts to pressure Ukraine into investigating a Democratic rival this year led to the third impeachment of a U.S. president in history, thrusting Washington’s national security apparatus into the spotlight. While Senate Republicans are pushing for a speedy trial and acquittal in January, House Speaker Nancy Pelosi has indicated she will not send over the articles of impeachment until she sees how the trial would be structured—a possible delaying tactic.

The impeachment battle has fueled concerns about the president’s use of office for personal gain at the expense of U.S. national security and about continued foreign interference in the upcoming election. It has also sharpened an already bitter political divide.

In September, Trump’s former Defense Secretary James Mattis identified “increasing contempt” between Americans as one of the country’s biggest long-term national security threats. Now, Trump is comparing impeachment to a “coup” and some Democratic lawmakers have accused the president of being a stooge for Russian President Vladimir Putin. 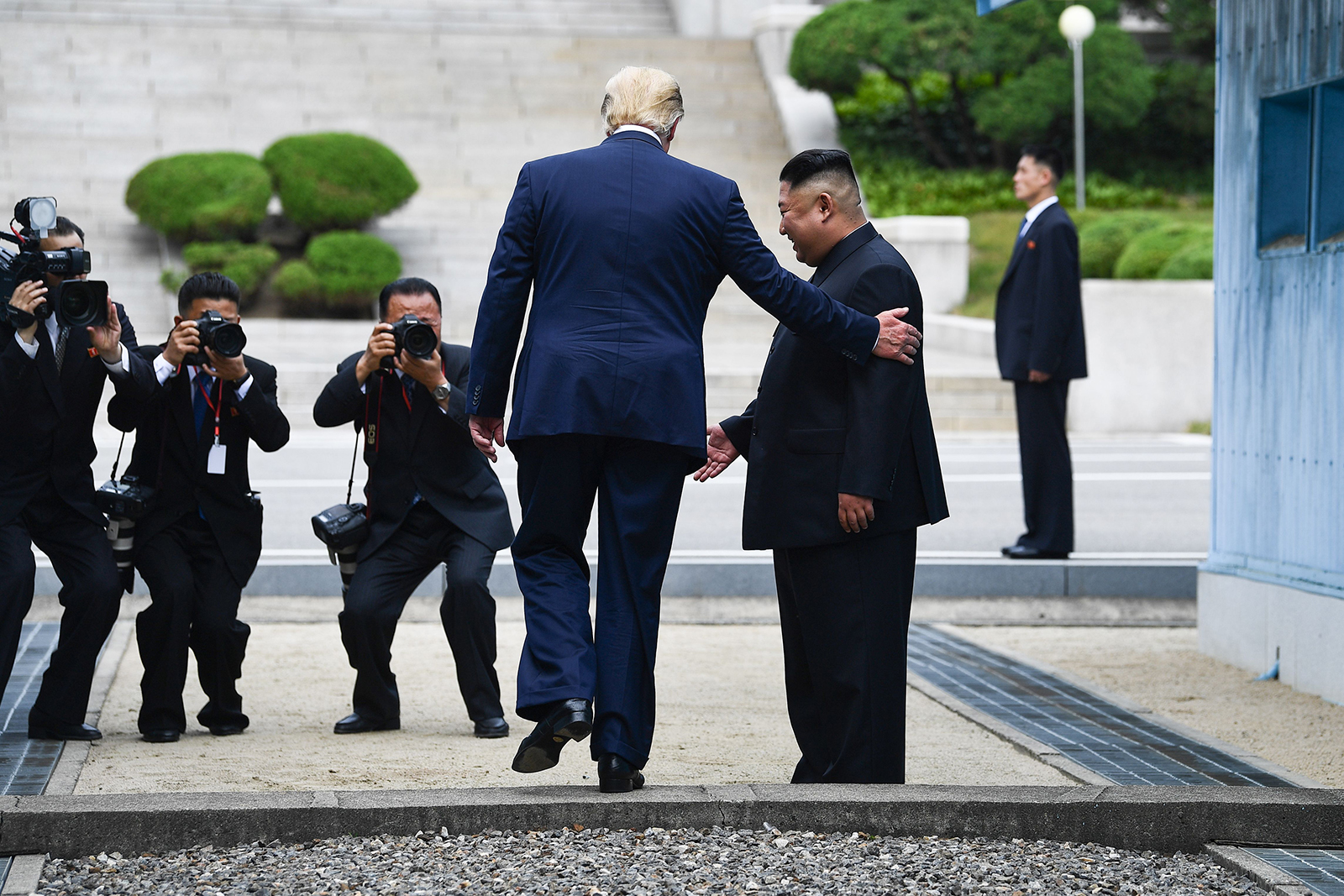 U.S. President Donald Trump steps onto the northern side of the military demarcation line that divides North and South Korea, next to North Korean leader Kim Jong Un in the Demilitarized Zone of Panmunjom on June 30.

U.S. President Donald Trump steps onto the northern side of the military demarcation line that divides North and South Korea, next to North Korean leader Kim Jong Un in the Demilitarized Zone of Panmunjom on June 30. BRENDAN SMIALOWSKI/AFP/Getty Images

The historic nuclear talks between Trump and North Korean Supreme Leader Kim Jong Un in 2018 offered hope that the two countries could de-escalate tensions and prevent a nuclear confrontation. Talks stalled after the Singapore Summit in June 2018. While both sides made significant verbal commitments in 2019, the year saw a gradual deterioration of bilateral relations.

Pyongyang accused Washington of failing to fulfill its commitment to ease economic sanctions, and it has further demanded national security guarantees. Washington, for its part, was never fully satisfied with Pyongyang’s denuclearization efforts. The deadlock that arose convinced North Korea that talks had fully stalled.

In recent weeks, Pyongyang tested a rocket engine, Kim took two horse rides up the highly symbolic Mount Paektu, and North Korean officials promised to deliver the United States a “Christmas present” if it did not comply with its demands. All of this suggests that Pyongyang is preparing to test an intercontinental ballistic missile, possibly by the end of the year.

Tensions between Iran and the United States skyrocketed in 2019, as the U.S. maximum pressure campaign took effect and Tehran lashed out against harsh U.S. sanctions. (Trump withdrew from the 2015 nuclear deal in 2018.)

In March, the United States designated the Islamic Revolutionary Guard Corps a terrorist group. In response, Tehran re-upped its nuclear program and began harassing and seizing commercial vessels in key shipping lanes in the Persian Gulf. Iran shot down a U.S. military drone in June, nearly leading to a retaliatory U.S. airstrike. The apparent lack of U.S. response—though there is evidence of an unacknowledged cyber strike—seemed to embolden Tehran, which launched a sophisticated attack on a key Saudi oil facility in September.

Attacks have ceased in recent weeks as Tehran launched a brutal crackdown on the worst political unrest the country has seen since the Islamic Revolution 40 years ago. But U.S. officials are bracing for another devastating strike in the region, this time perhaps targeting the region’s critical sources of drinking water. 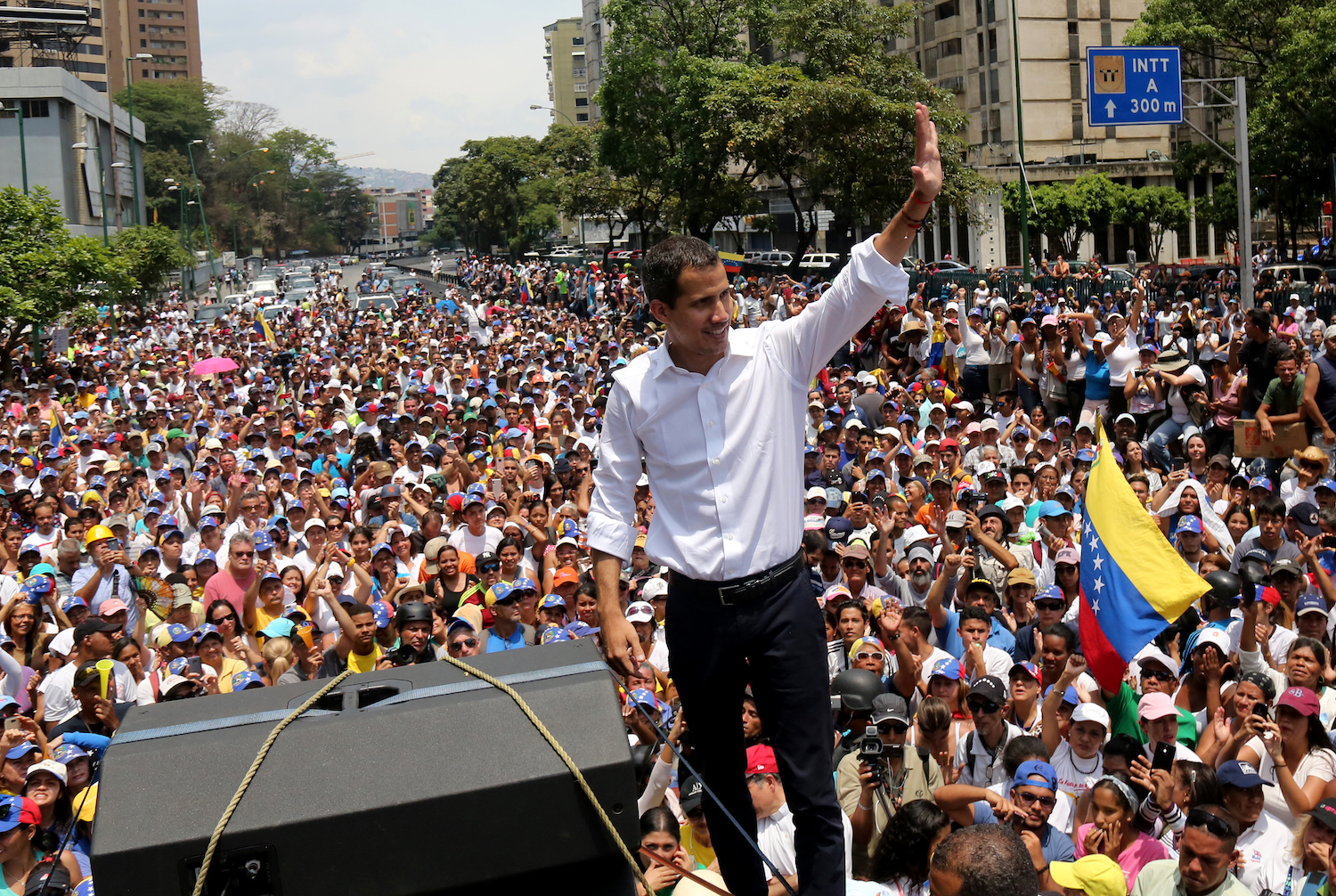 Venezuelan opposition leader Juan Guaidó waves at his supporters during a demonstration at Avenida Francisco de Miranda on May 1 in Caracas.

Venezuelan opposition leader Juan Guaidó waves at his supporters during a demonstration at Avenida Francisco de Miranda on May 1 in Caracas.Edilzon Gamez/Getty Images

Venezuela’s Russia-backed leader Nicolás Maduro clung to power this year despite an economic collapse, nationwide blackouts and fierce opposition from Juan Guaidó, who declared himself Venezuela’s interim president in January with support from the West. Tensions threatened to boil over in May, when Guaidó tried and failed to ignite an uprising.

The attempted coup was seen as an embarrassing failure by the United States and particularly National Security Advisor John Bolton, reportedly the architect of multiple attempts to unseat Maduro. In addition to harsh sanctions, the United States went so far as to draw up military options, but never took any action.

Dan Haverty contributed to this report.