A look back at the biggest political and economic shifts in the region.

Welcome to Foreign Policy’s weekly South Asia Brief. As 2019 draws to a close, we wanted to take a look back at the year gone by. Here, we examine the region’s performance on a range of indicators that we often use in this newsletter, including trade and economic growth, corruption, and education.

Here are 10 charts that show the bad, the worse, and the hopeful for South Asia in 2019.

Welcome to Foreign Policy’s weekly South Asia Brief. As 2019 draws to a close, we wanted to take a look back at the year gone by. Here, we examine the region’s performance on a range of indicators that we often use in this newsletter, including trade and economic growth, corruption, and education.

Here are 10 charts that show the bad, the worse, and the hopeful for South Asia in 2019.

Apart from Bangladesh and Nepal, most economies in the region saw below-average economic growth in 2019. Pakistan, India, and Sri Lanka endured the sharpest slowdowns, according to World Bank data. 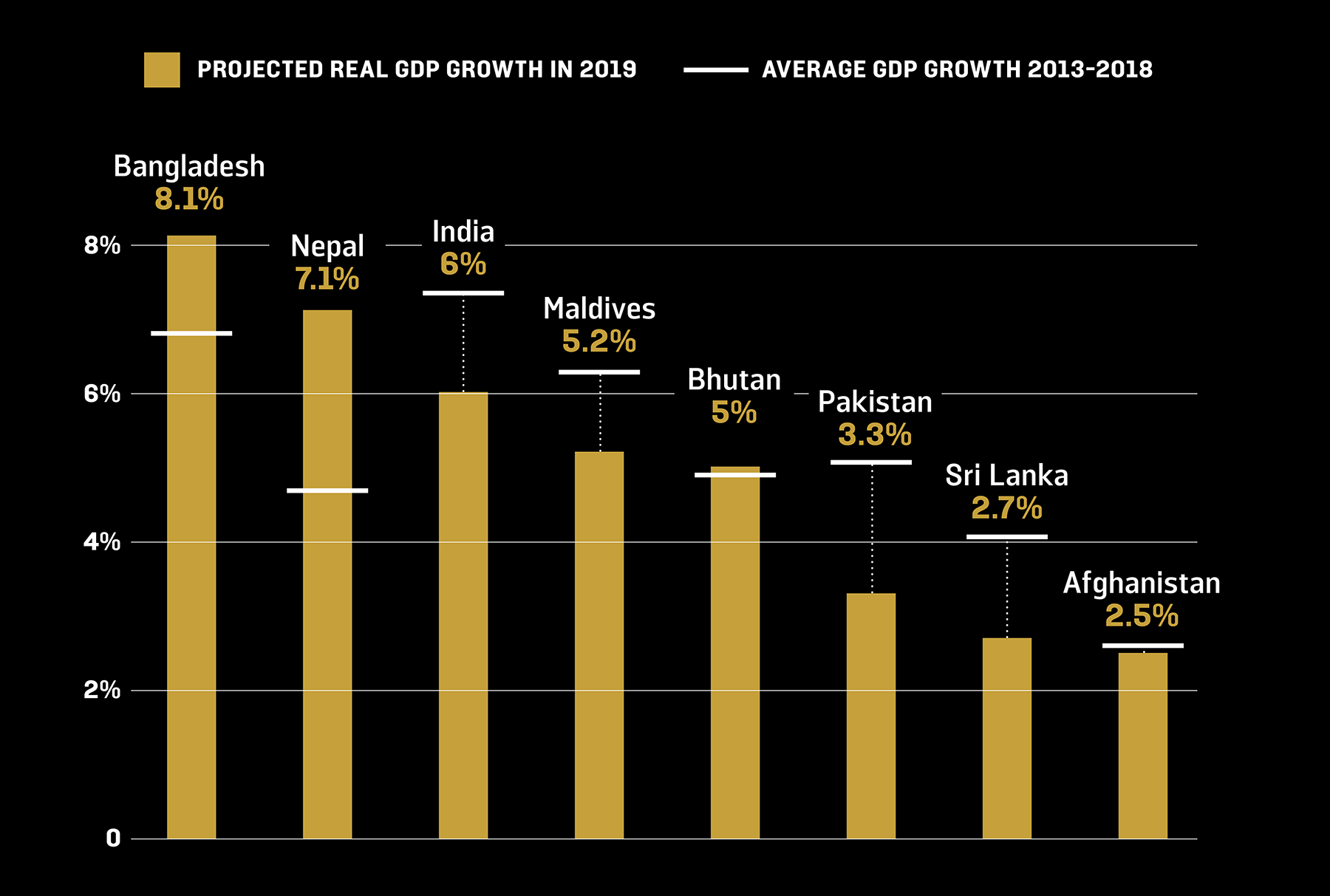 Given its size, India’s economy provides the most cause for concern. Growth rates have fallen from a peak of 9.3 percent in 2016 to 4.5 percent in the last quarter—the slowest growth in years. The country’s central bank slashed interest rates in 2019, but that hasn’t yet led to a better investment climate. While social issues such as the country’s recent citizenship amendment law have recently generated international headlines, India’s economy will likely return to focus in 2020. 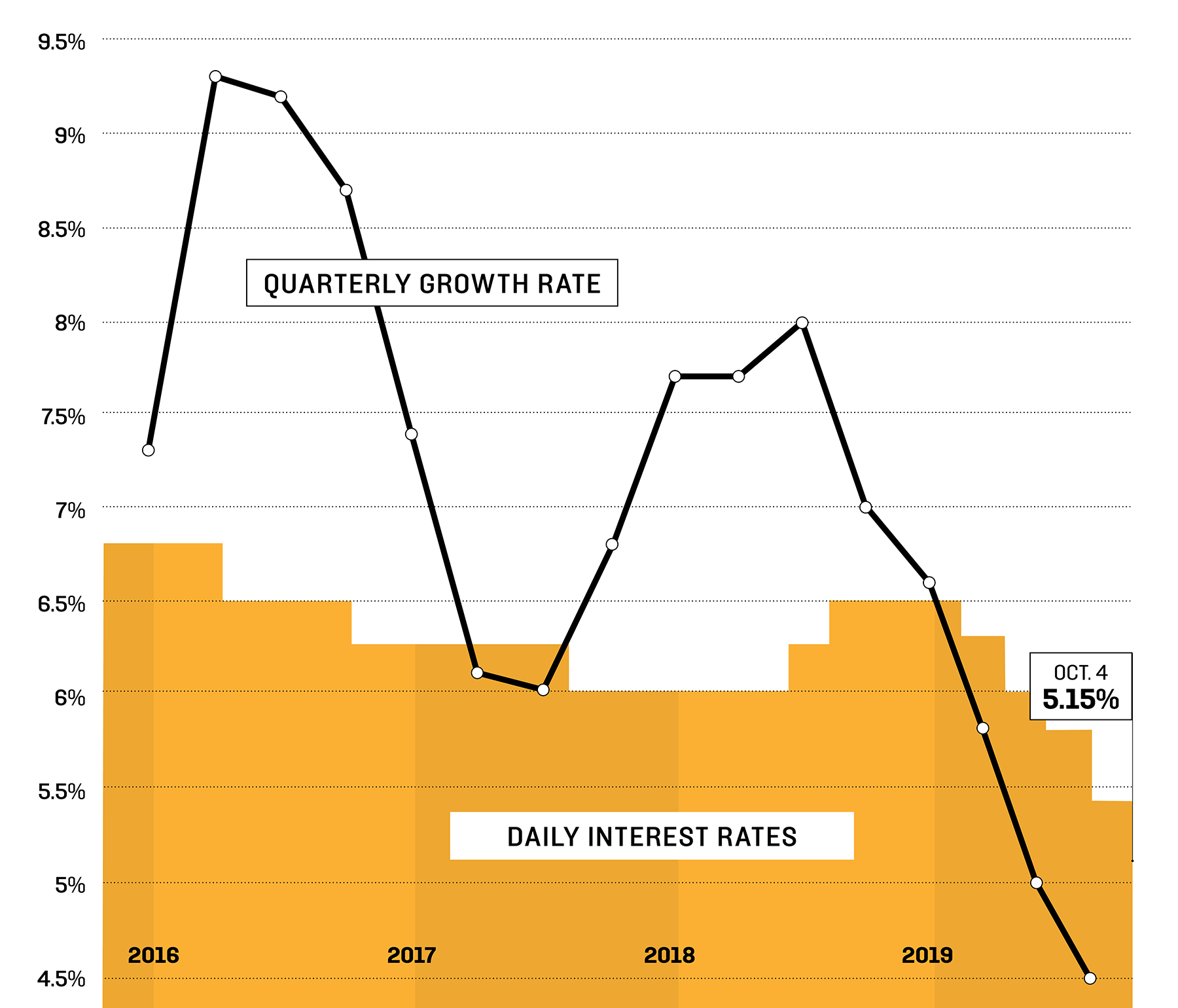 The success—or weakness—of South Asia’s economies may relate to how they welcome international business. As the World Bank’s Doing Business rankings show, no country in the region fares well on this measure. India jumped to 63rd place, but it is still far behind developed economies. Bangladesh and Afghanistan rank near the bottom.

The Ease of Doing Business in South Asia 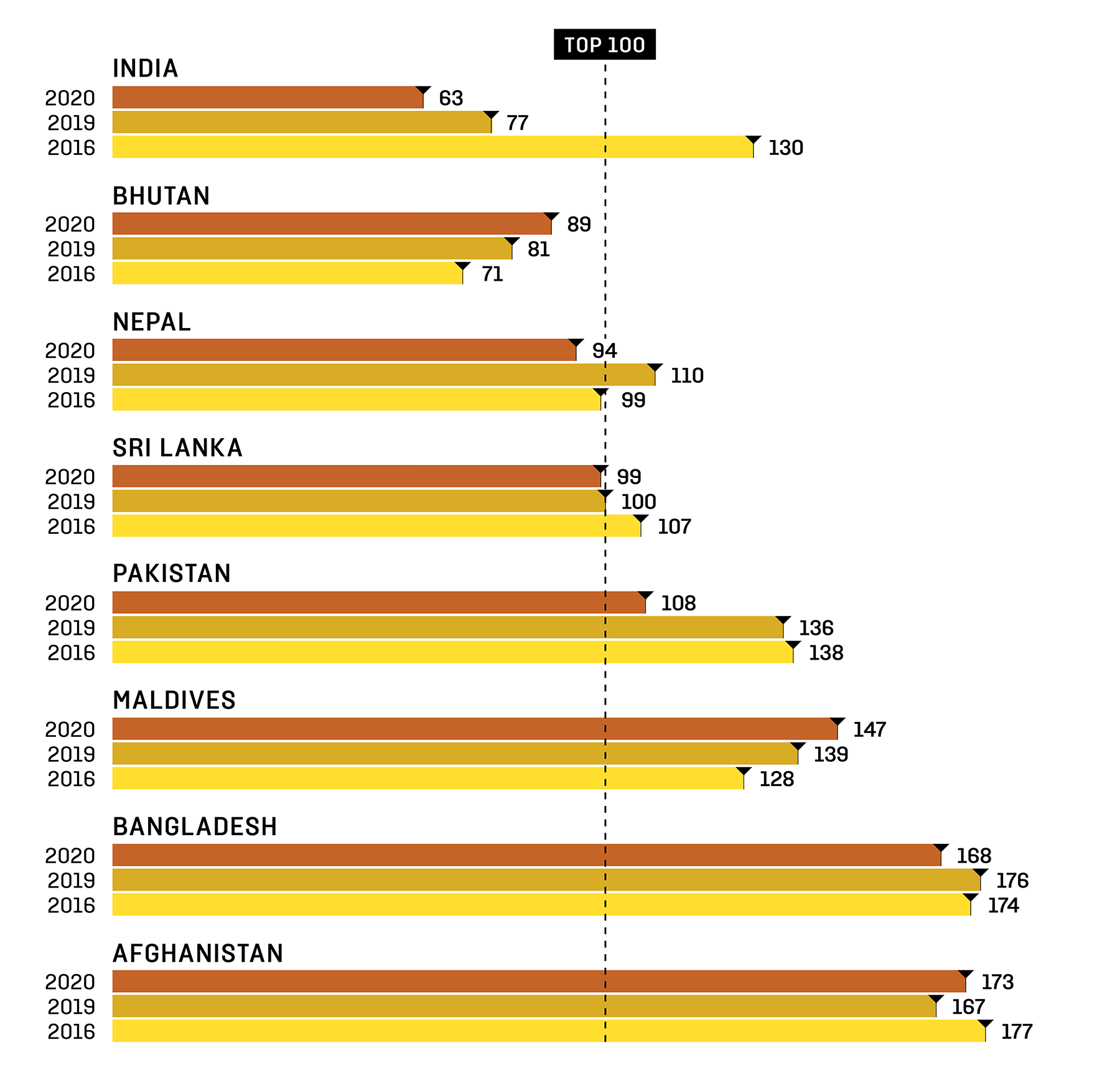 Another indicator that shows where South Asia’s economies have lagged is corruption. Trace International’s annual bribery risk index, which shows how likely companies are to face bribe demands, paints a troubling picture. Only Bhutan came close to cracking the top 50 countries in the world in the rankings. Pakistan, Afghanistan, and Bangladesh were rated among the world’s most corrupt.

The Trace International ranking of how likely companies are to face bribe demands in different countries.

One trend that seems unstoppable in India is its government’s propensity to shut down the internet when there are protests or communal tensions. In December alone, the government imposed more than a dozen communication blackouts in West Bengal, Uttar Pradesh, Meghalaya, and Tripura. Kashmir, of course, has been under a digital blackout since Aug. 4, right before New Delhi revoked its autonomous status. India has for several years led the world on internet shutdowns—and no other country comes close.

Countries With the Most Internet Shutdowns 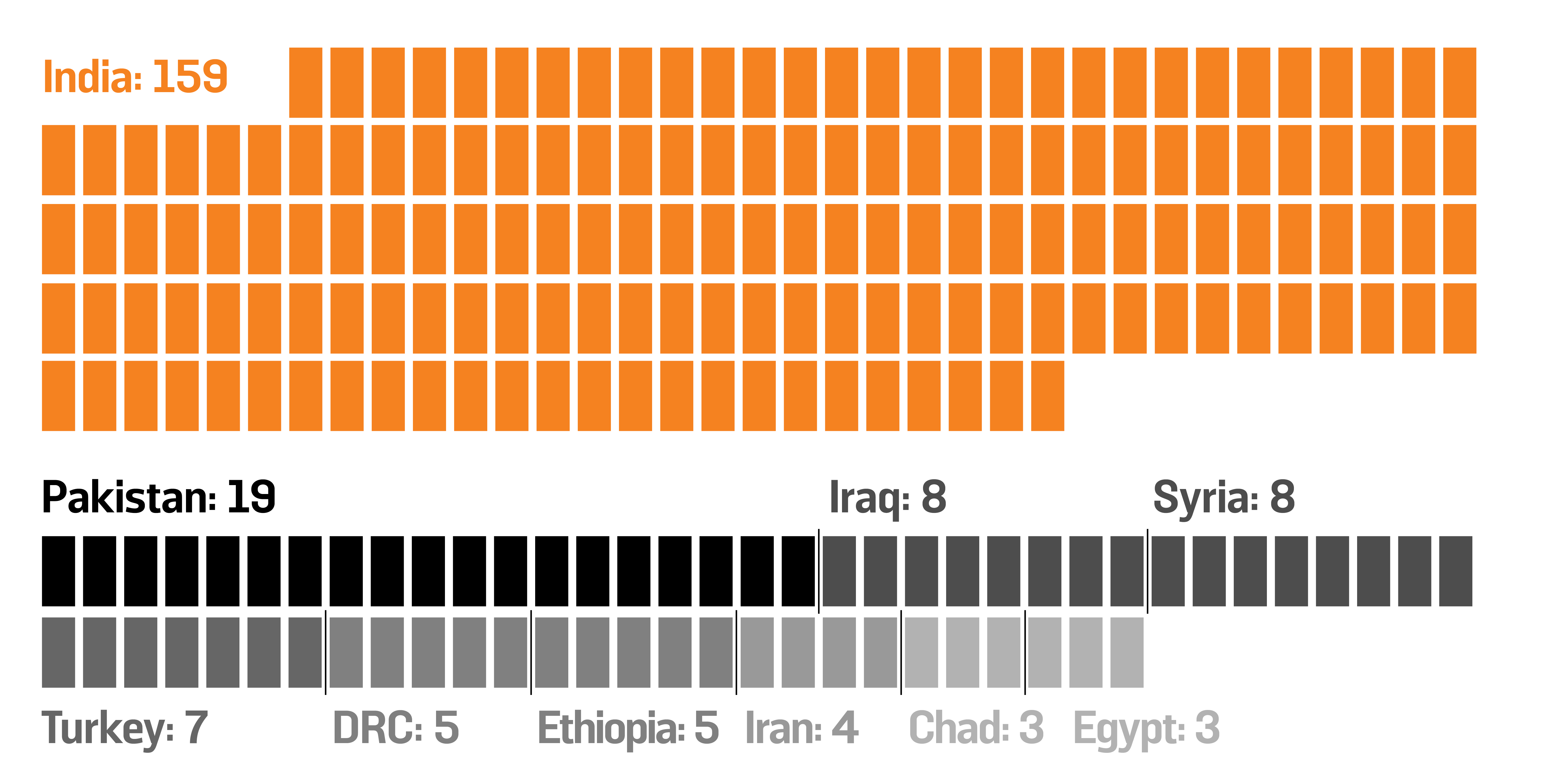 On a brighter note, more students from South Asia are heading to the United States for higher education. India saw a 92.6 percent increase in the number of students it sent to the United States between 2009 and 2019, while Bangladesh witnessed a 215 percent rise. A larger issue for these international students is whether they are able to find work visas, and eventually green cards, as they seek to put their degrees to use in the United States: According to the Wall Street Journal, wait times for Indians for green cards are now up to 50 years. Those factors could  lead leading students in South Asia to either stay home or seek other destinations as places to study. 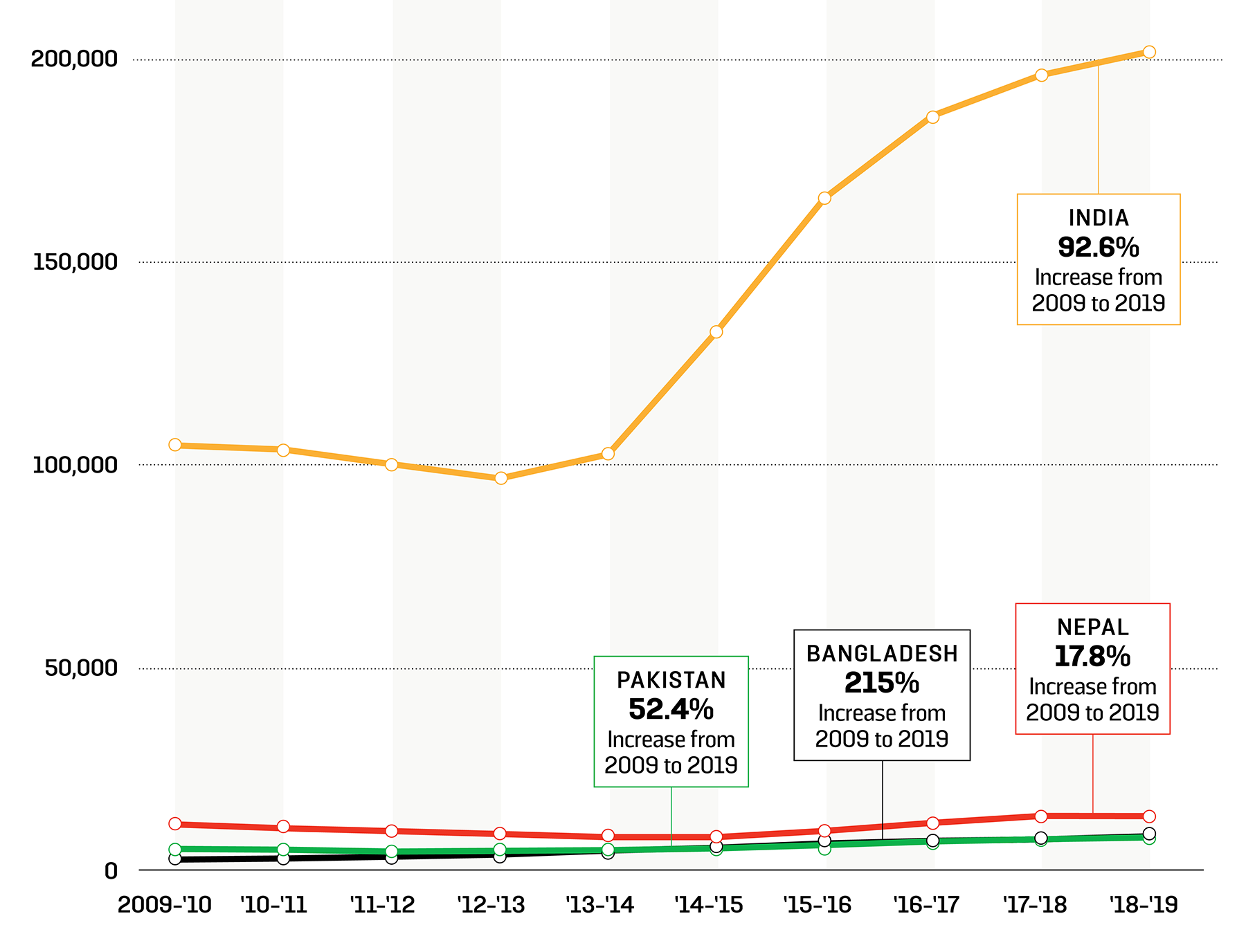 As climate change draws attention to energy usage in the developing world, we looked at how much electricity South Asian countries generate from dirty sources such as coal. While China’s dependence on coal has declined, India and Bangladesh have been steadily increasing their use of coal. As we put it at the time, “The demand for energy in a region of 1.8 billion people is rising too quickly for solar, wind, and nuclear sources alone to satisfy.”

Percentage of Electricity from Coal 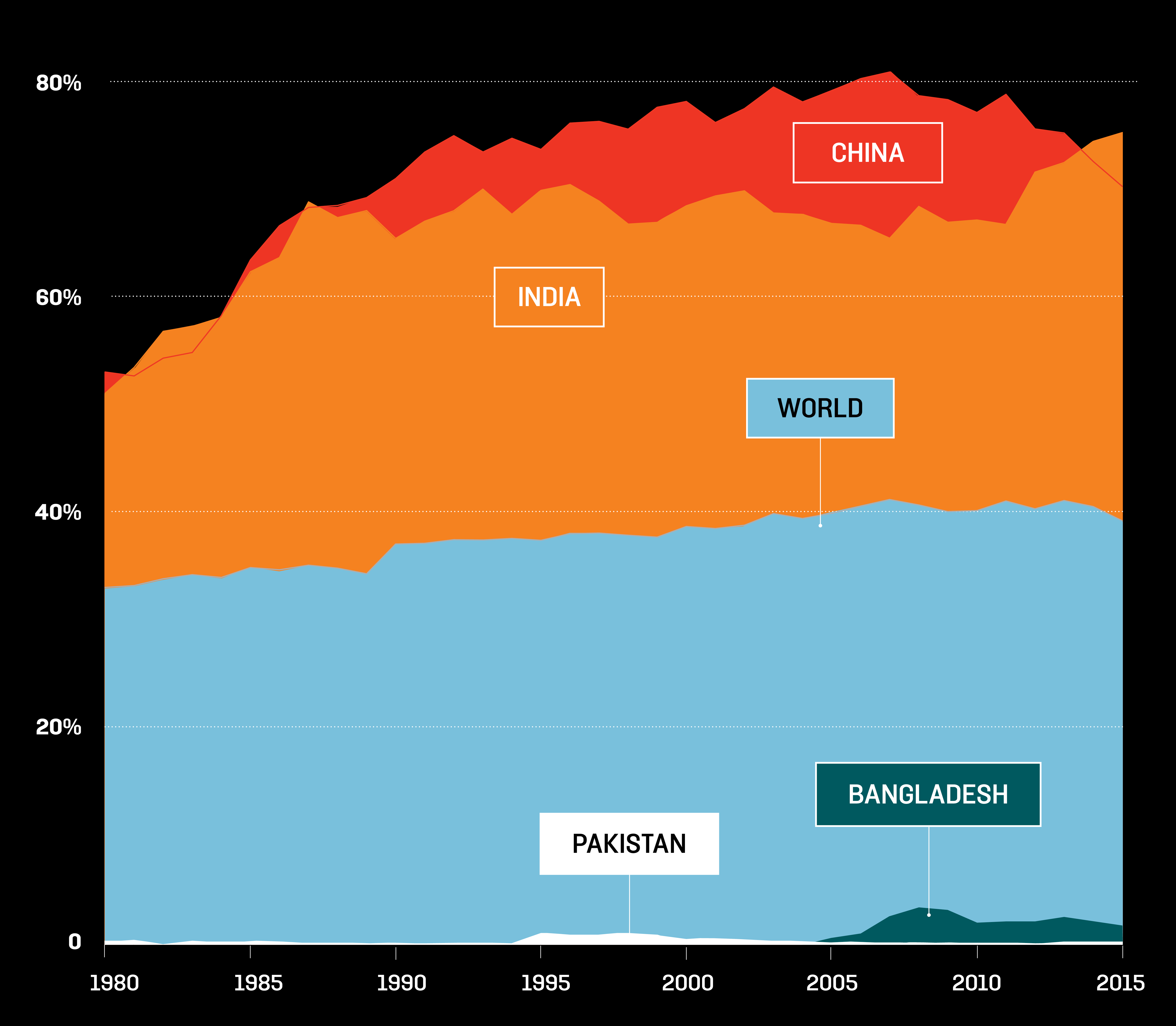 Have you ever wondered how whether Indians will give up tea for coffee? When we looked into it, the answer was a resounding no. Despite the growth of chains such as Starbucks, Coffee Bean, and Café Coffee Day in the country, Indians consume only a fraction of the amount of coffee as people in the West. Chai will continue to rule for a while yet, it seems.

Per capita in pounds of coffee beans 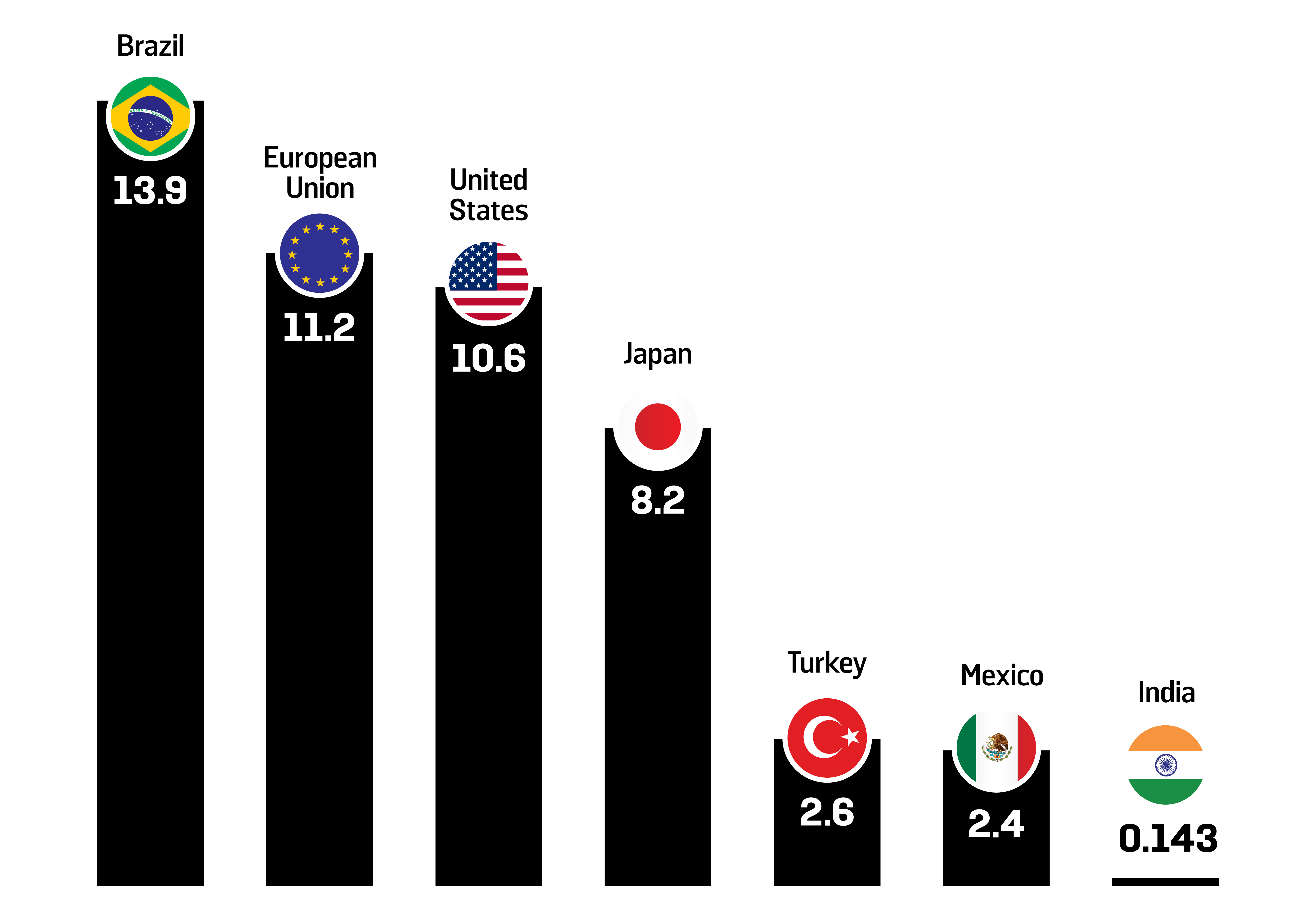 Last on the list is a slightly hopeful pair of charts. Much of the news from Afghanistan tends to be bad. Here are reasons for some optimism. Life expectancy in Afghanistan has risen from 56.3 years in 2001 to 64.1 years in 2017, with steady growth throughout that period. Meanwhile, female primary school enrollment has risen from 44.5 percent in 2002 to 84.15 percent in 2017.

Life Expectancy at Birth in Afghanistan

NEW FOR SUBSCRIBERS: Want to read more on this topic or region? Click + to receive email alerts when new stories are published on Politics, Economics, South Asia