China’s designs in space, a drought crisis in southern Africa, and other stories you may have missed during this year’s chaotic and nonstop news cycle.

In today’s relentless news cycle, it’s difficult to keep up on even the biggest news stories of the year, from chaos in Washington to summits on North Korea to protests sweeping across the Middle East. That made it easy for other, equally important news stories to get drowned out in the noise—but not to worry, Foreign Policy has you covered. Here are 10 stories you may have missed in 2019.

1. China Barrels Into the Space Race

At the beginning of the year, China became the first country to gain access to the far side of the moon, landing a lunar probe there for the first time ever and reflecting Beijing’s aim to be a major space power alongside the United States and Russia in the coming decades. It was a major scientific feat but also fueled concerns in Washington about what China’s race to space means for national security. Senior U.S. defense officials warned in February that China is building up infrastructure in Latin America, including a complex satellite facility in Argentina, that could monitor and potentially target U.S. satellites in space.

2. Ebola Epidemic Continues—But There Are Glimmers of Good News

The Democratic Republic of the Congo is still reeling from the second-largest epidemic of Ebola in recorded history, with over 3,300 recorded cases and 2,200 deaths. The deadly virus first raised alarm bells on an international scale after an outbreak in 2014 in West Africa that killed over 11,000 people. But in the wake of these epidemics, the global health community accelerated research and funding to tackle the virus. For the first time ever, the U.S. Food and Drug Administration approved a vaccine for Ebola this year, culminating decades of research on a virus that has historically had a mortality rate of about 80 percent.

The U.S. National Security Agency ended a long-standing program that collects information about American phone calls and texts with bipartisan backing in Congress. The decision closes a chapter on a controversial and secret program that began after the 9/11 terrorist attacks and was disclosed by the former NSA contractor Edward Snowden. Snowden’s disclosure sparked a yearslong nationwide debate about privacy and government surveillance. Senior Democratic and Republican lawmakers introduced a bill to end the NSA’s practice of collecting metadata in a rare burst of bipartisanship this year, even at the height of the impeachment investigation.

To the extent climate change was in the news in 2019, some of the tinier—but equally significant—knock-on effects were overshadowed. A group of scientists this year released a first-of-its-kind global scientific review of insect species and found that 40 percent of insect species are declining and a third are endangered. Insects are the base of the food chain and the linchpin of ecosystems everywhere. Their continual decline, fueled by climate change, agriculture, pesticides, and increasing urbanization, will have “catastrophic” impacts on the planet, the researchers concluded. A separate study found that nearly one in three birds have vanished from North America in the past 50 years, leaving the continent with 3 billion fewer than it should otherwise have, thanks to habitat loss. Like insects, birds play an important role in the world’s ecosystems, making their decline a dangerous warning sign. “Our study is a wake-up call. We’re experiencing an ecological crisis,” one of the researchers said.

As ties between the West and Russia wallow at the worst point since the end of the Cold War, the Trump administration has been forging closer ties with one of the last countries fully in Moscow’s orbit. President Donald Trump’s then-national security advisor, John Bolton, visited Belarus earlier this year, and U.S. officials say Secretary of State Mike Pompeo is expected to follow suit and travel to Minsk in January. Belarus, which has been referred to as “Europe’s last dictatorship,” expelled the U.S. ambassador in 2008 after Washington slapped sanctions on it over human rights abuses. But now, the United States is expected to revive diplomatic ties with Belarus—sending an ambassador to Minsk for the first time in over a decade—even as Russian President Vladimir Putin tries to subdue it.

A multiyear drought in southern Africa has put at risk 45 million people, including 11 million at crisis levels of food insecurity. Only one in five of the last growing seasons has had normal rainfall levels, and climate experts warn drought conditions could get worse in the coming years thanks to the impacts of climate change. Small-scale farmers are bearing the brunt of the drought, and some experts warn that disaster relief efforts from the international community and governments of South Africa, Zimbabwe, and Zambia are falling short. 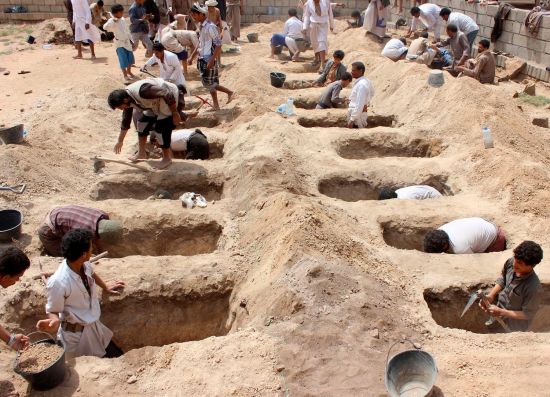 Yemenis dig graves for children who were killed when their bus was hit during a Saudi-led coalition airstrike on Aug. 9, 2018.Stringer/AFP/Getty Images

Yemen’s civil war has dragged on for five years, fueling the world’s worst humanitarian crisis, with millions of people on the brink of famine and about 80 percent of the population—24 million people—requiring humanitarian assistance. Now, Saudi Arabia’s ruling royal family has dispatched a young Saudi prince to try to negotiate an end to the conflict that has pitted a Riyadh-led coalition against Iran-backed Houthi rebels. Some regional and U.S. officials are cautiously optimistic that the new push for peace will actually bear fruit. All the while, U.S. support for the Saudi-led coalition fighting the Houthis has sparked heated political battles in Washington over the president’s war power authorities.

Widespread demonstrations in Chile, Ecuador, and Bolivia grabbed international attention this year as Latin American protesters demanded drastic changes in to their political leaders. Drowned out in the noise was an equally dramatic protest movement in Haiti, the Western Hemisphere’s poorest country, that left over 40 Haitians dead, fueled a humanitarian crisis that leaves millions of people at risk of food insecurity, and sparked a political crisis that has yet to be resolved. President Jovenel Moïse has insisted he will not resign and clings to power amid protests over widespread government corruption. Facing an impasse, protests are expected to flare up again in the new year.

Europe’s migration crisis has reshaped the continent’s politics and shed light on the dangerous journey African asylum-seekers and migrants attempt to make crossing the Mediterranean Sea to Europe. The migration crisis is still underway, with many trapped at holding facilities in North Africa. But lost in the focus on migrants crossing the Mediterranean is the journey many had to take to even get there. The United Nations High Commissioner for Refugees estimates that twice as many African migrants die making an overland journey to reach the Mediterranean than those that attempt to cross the Mediterranean to Europe. Over 1 million African migrants moved to other parts of the continent per year in the past five years, while 80,000 per year have been intercepted in Southern Europe during that same period, according to analysis by the U.S. Defense Department’s Africa Center for Strategic Studies.

Trump unveiled new counterterrorism powers against terrorist financing in September that, in the words of one senior State Department official, marked “the most significant update to our terrorism sanctions authorities since the immediate aftermath of the 9/11 attacks.” But the announcement received barely any media coverage; it came the same day that Trump’s National Security Advisor John Bolton resigned. Sanctions have increasingly become a foreign-policy weapon of choice for Washington to tackle terrorism, and the executive order Trump signed in September supercharges its sanctions authorities. The new authorities give the U.S. government much wider authority to go after any person, business, or institution that has conducted transactions with leaders of terrorist groups, financiers, and those involved in training terrorist organizations.