The political and economic trends that shaped China this year.

Welcome to Foreign Policy’s China Brief. This week, we take a look back at 2019 in terms of popular mobilization, trade, and other economic indicators. From the ebb and flow of Hong Kong’s protests to China’s growing economic elite, here are 10 trends that shaped the news in China this year.

We’ll round up FP’s top 10 China stories of the year in next week’s newsletter. China Brief will return to its normal schedule in 2020.

Welcome to Foreign Policy’s China Brief. This week, we take a look back at 2019 in terms of popular mobilization, trade, and other economic indicators. From the ebb and flow of Hong Kong’s protests to China’s growing economic elite, here are 10 trends that shaped the news in China this year.

We’ll round up FP’s top 10 China stories of the year in next week’s newsletter. China Brief will return to its normal schedule in 2020.

The biggest China story of the year—or at least the most visible to the outside world—was Hong Kong’s pro-democracy movement. The size of the protests ebbed and flowed over the course of the year: The massive peaceful marches of the summer diminished to smaller, but still significant, gatherings as police cracked down and protesters took to more radical methods. But the mass protest this month that followed a triumph for pro-democracy candidates in last month’s municipal elections—not reflected below—showed that Hong Kongers could still turn out in big numbers.

In the wake of Hong Kong’s disruption, Macao has thrived—with Chinese President Xi Jinping favoring the island for visits and new deals. The island’s relative calm under Chinese Communist Party rule owes a lot to the incompetence of its past colonial masters, as Ricardo Barrios writes for FP.

The island’s economy didn’t truly take off until 2002, when a previous casino monopoly was broken. That, combined with growing wealth in mainland China—where gambling is illegal, though common—has contributed to a sharp rise in Macao’s GDP. Despite a drop in 2015 during anti-corruption purges under Xi, Macao is still projected to become the richest place on earth per capita in 2020. 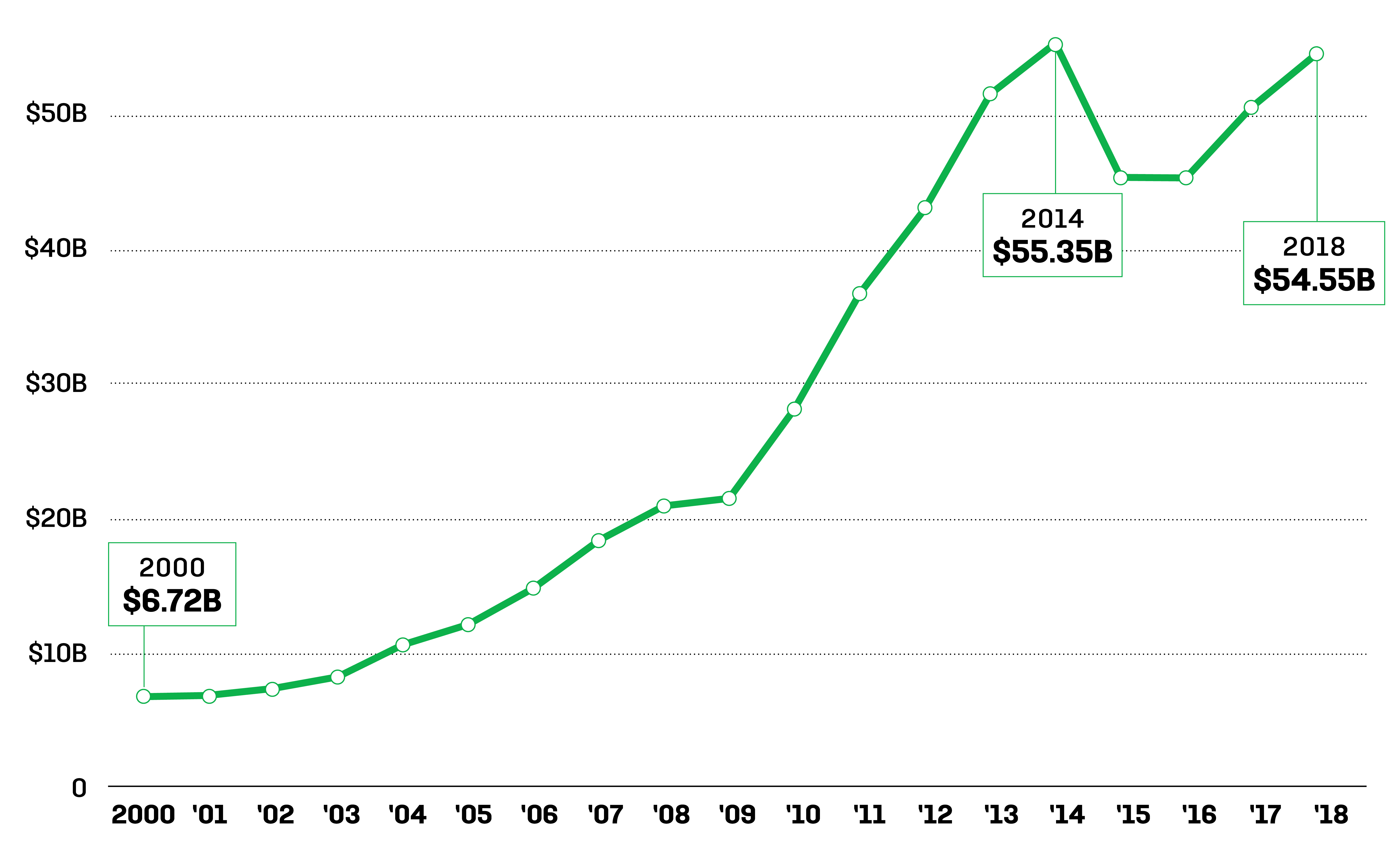 Meanwhile, Hong Kongers are increasingly dissatisfied with the state of their “rights without democracy”—especially as those rights seem to be in danger. The former British colony inherited a strong independent judiciary, but Beijing has threatened to chip away at it. Once convinced that Hong Kong possessed a form of democracy, residents are now skeptical of that idea.

Perceptions of Democracy in Hong Kong 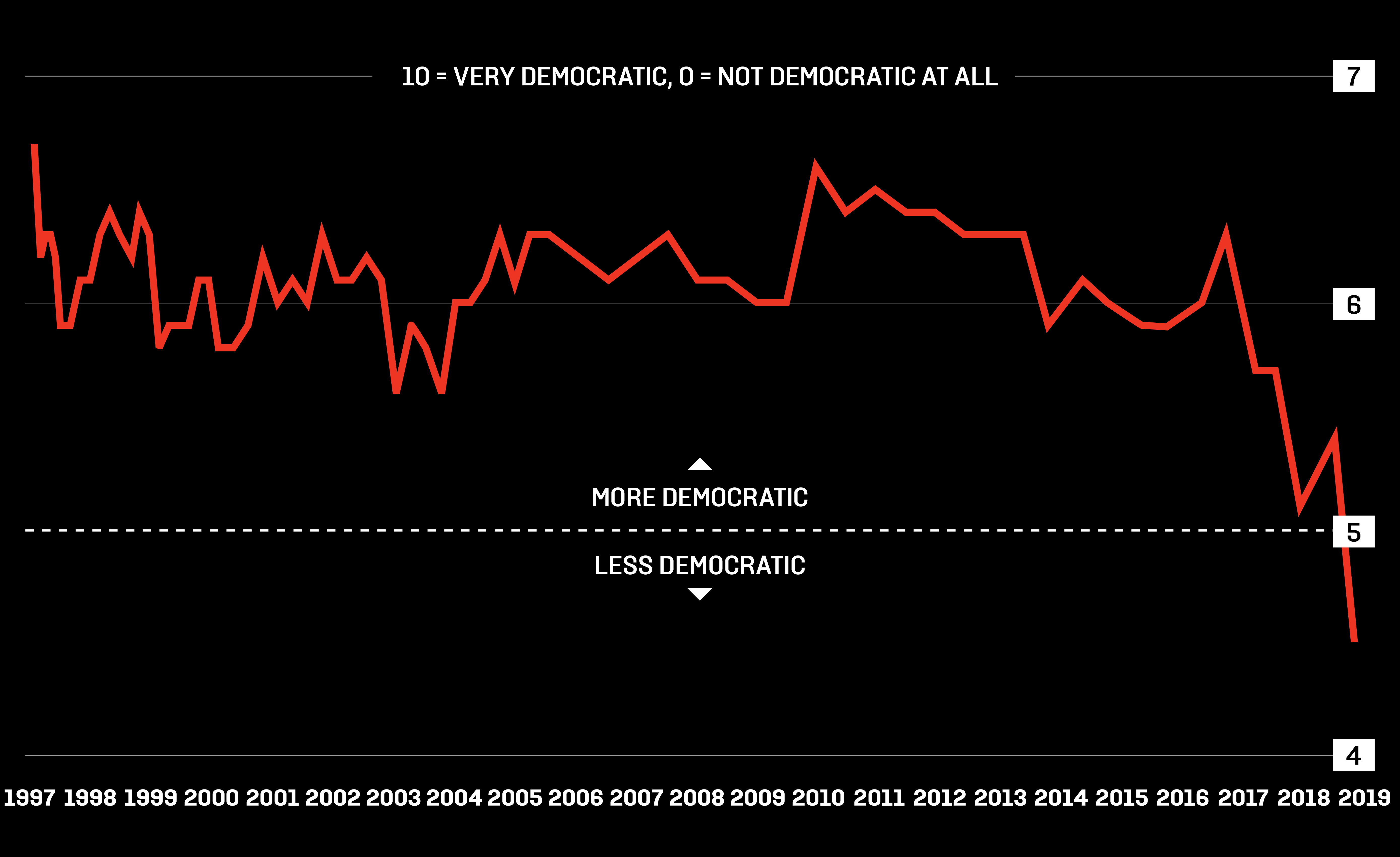 And as Hong Kong’s governance worries have grown, its place in the Chinese economy has shrunk, rendering it less critical to Beijing’s needs. As Hilton Yip argues in FP, however, Hong Kong’s total utility isn’t captured in the raw GDP figures—not least because the transparency and reliability of the city’s business law compared to the mainland’s are crucial for business. 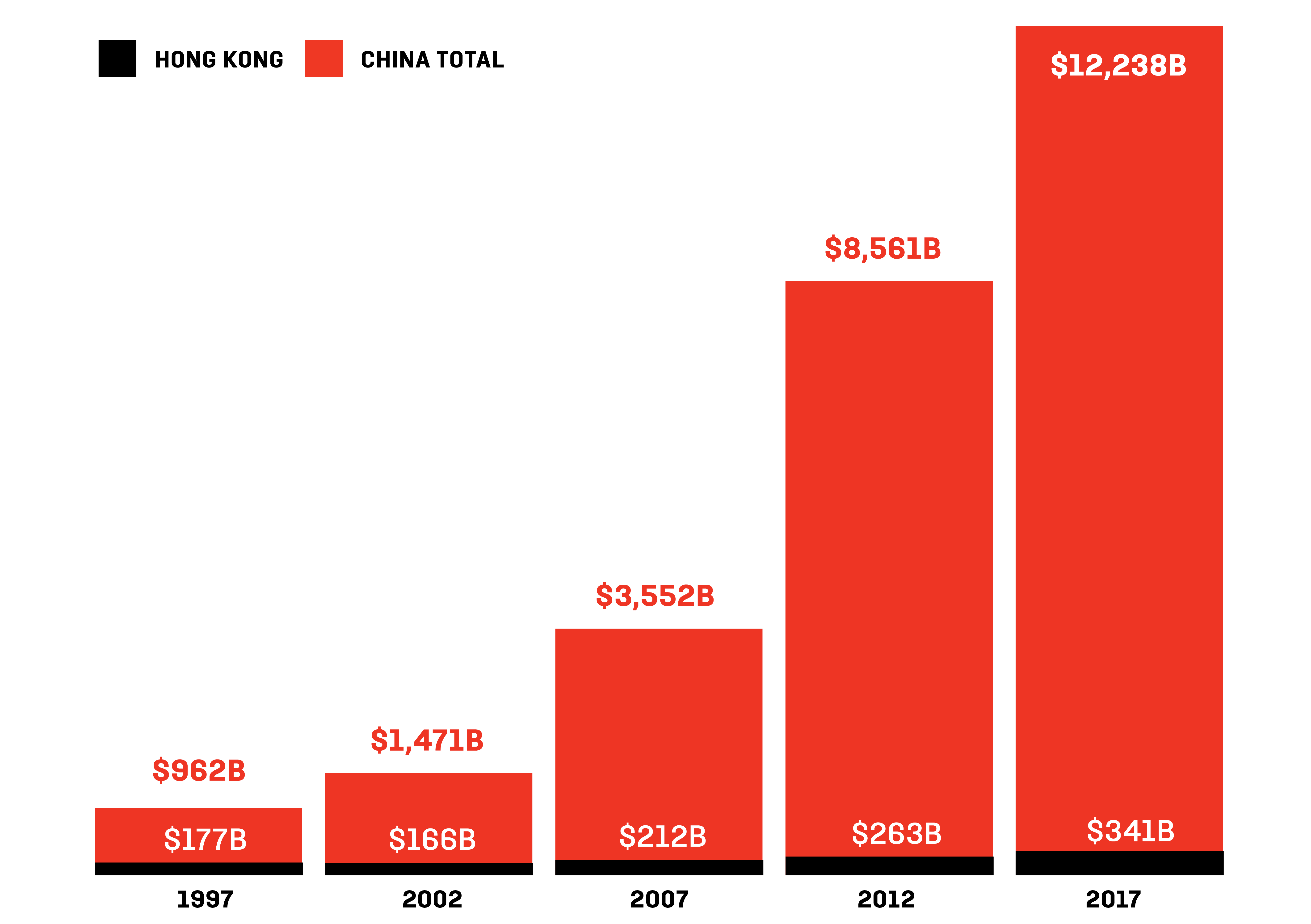 This year, China’s most vital outside economic relationship—its entanglement with the United States—has looked shaky. The recently concluded “phase one” trade deal may be the beginning of a reconciliation, or it may amount to very little in the face of decoupling from both sides. One of the most visible signs of the relationship’s decline is the collapse of Chinese direct investment in the United States itself, as firms once eager to expand into foreign markets now avoid the political risk. 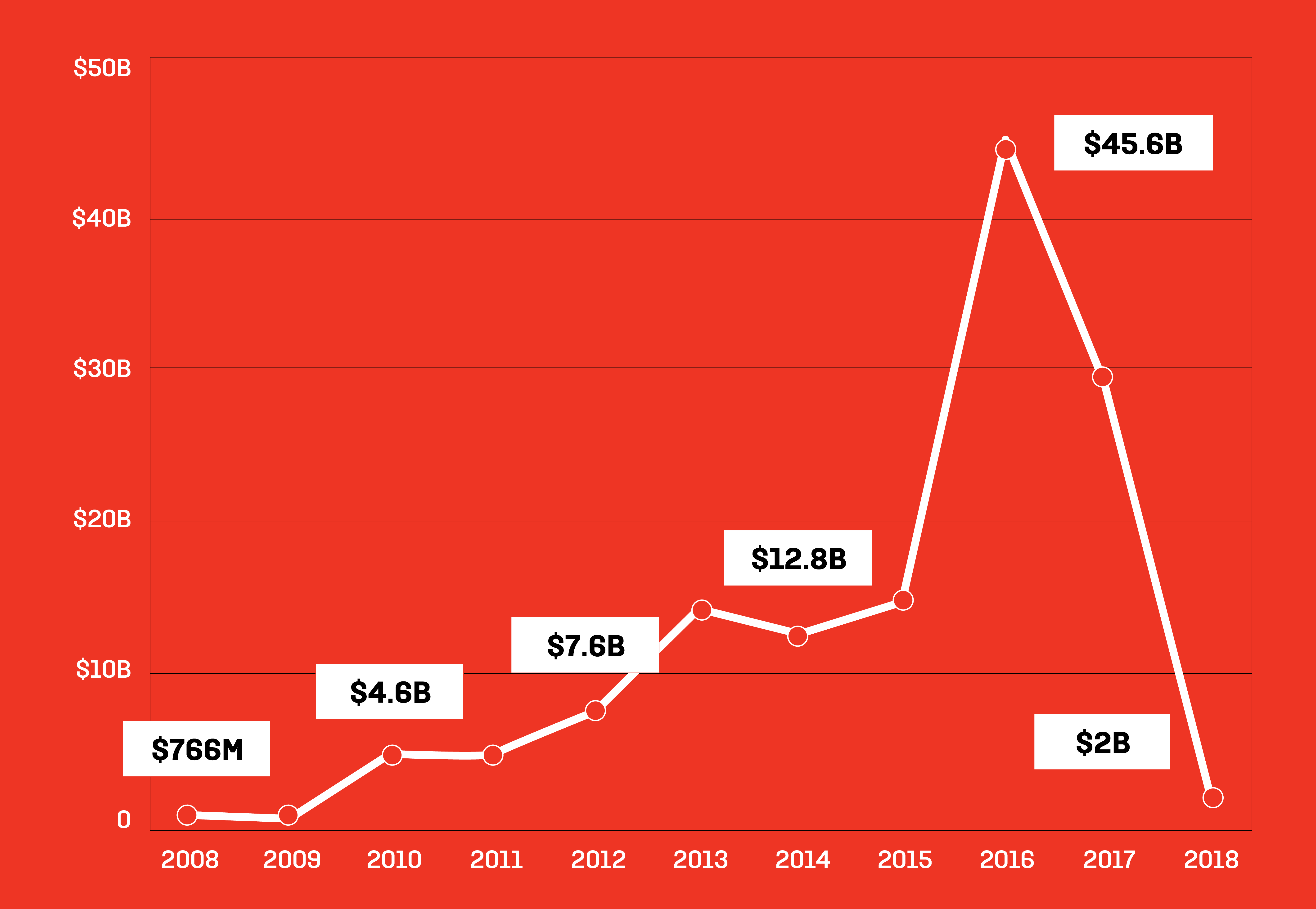 One key part of the preliminary trade deal is agricultural products: China has promised to make $200 billion in farm purchases from the United States. That would be a huge increase on the 2017 figures. It would also be almost entirely dependent on soybeans, for which China has found alternative sources, from Brazil and elsewhere.

By value in U.S. dollars 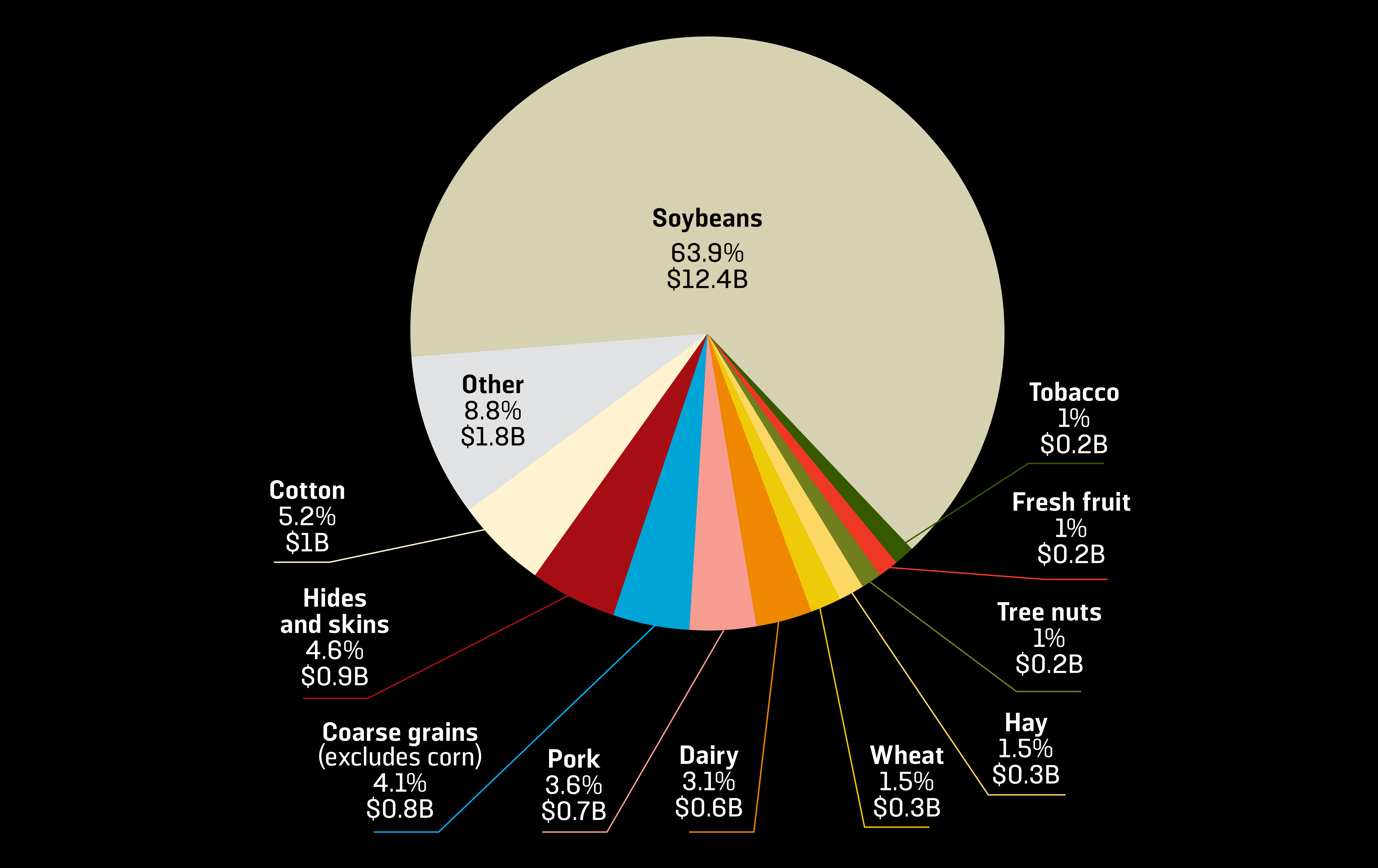 7. Where India Stands With China

The United States isn’t the only nation with a trade gap with China. Though smaller in absolute numbers, India’s trade gap is larger in relative terms—and it has only grown since China’s economic takeoff in the mid-2000s. Xi and Indian Prime Minister Narendra Modi talked trade this year, but there has been little progress: India simply doesn’t make anything the Chinese public wants. China’s current imports from India are almost entirely raw materials.

Imports and exports since 2001, in billions USD 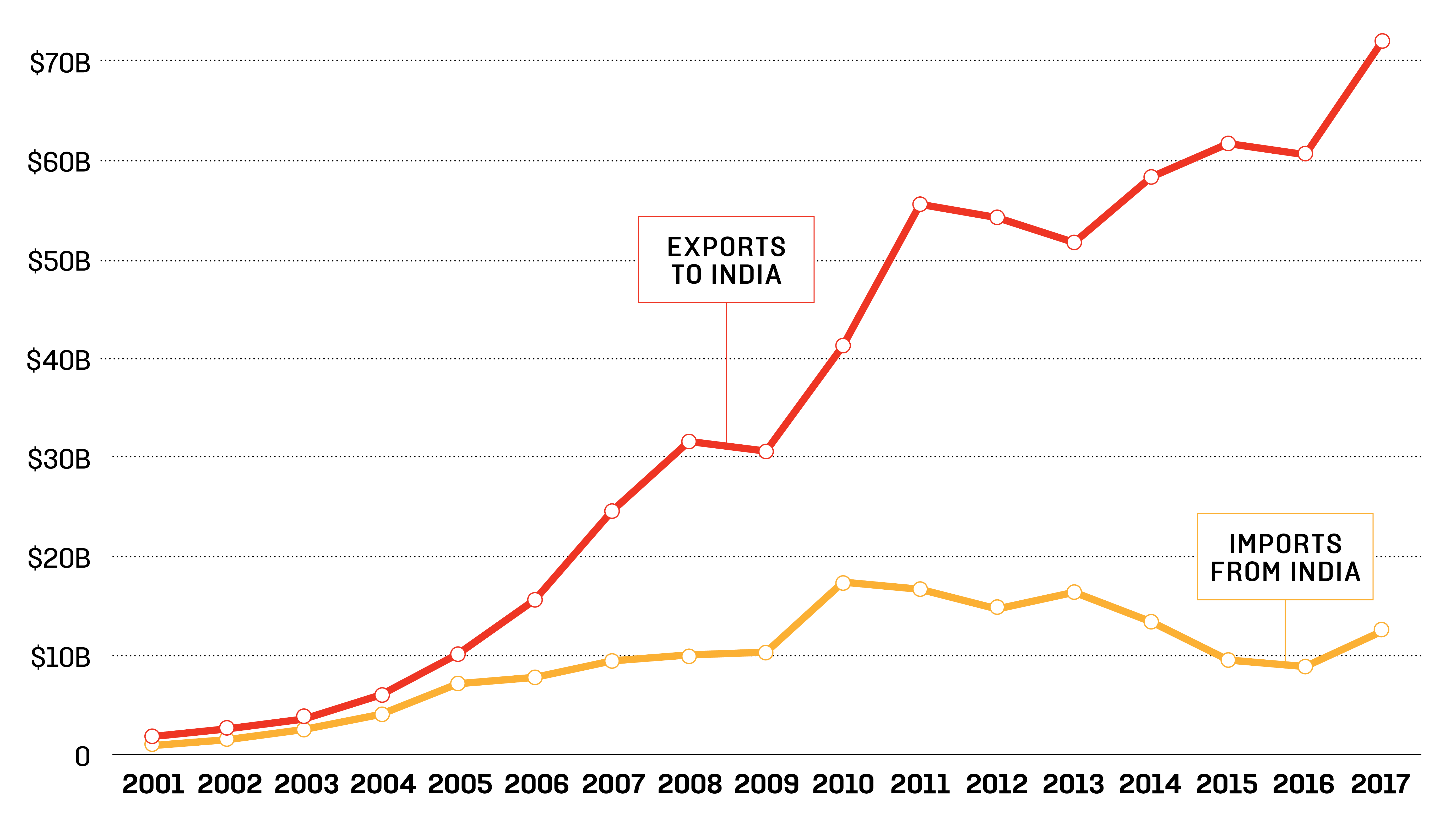 In the last few years, the Chinese economy has become increasingly dominated by the state. Credit has flowed freely for top-heavy and unproductive state-owned enterprises and tightened for the private sector. Chinese productivity remains strikingly low and has been growing at a slower rate over the last decade. That is particularly evident in the state sector, where overproduction and underwork remain the norm.

Share of Credit Growth for State vs. Private Enterprises 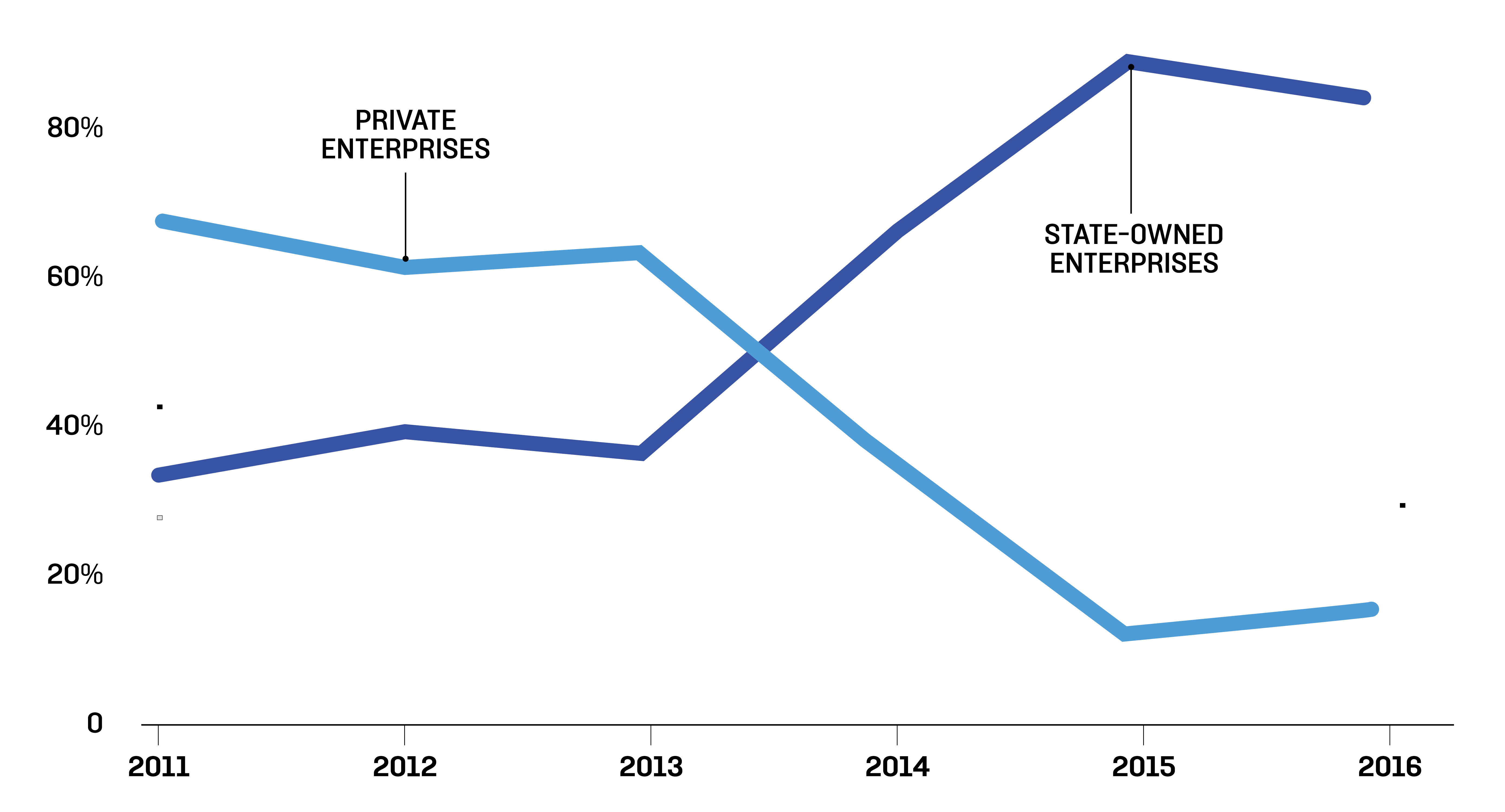 SOURCE: Calculations based on people’s bank of China’s almanac of China’s finance and banking data

China might have its economic woes, but it also has plenty of rich people. In 2019, there were more individuals in China than in the United States who are in the top 10 percent of global wealth, according to a Credit Suisse report. That is mostly due to the sheer size of China’s population, so it doesn’t reflect the majority: The country’s urban upper middle class is a huge consumer force, but in much of China per capita GDP remains below the global average.

The Most People in the Wealthiest 10 Percent 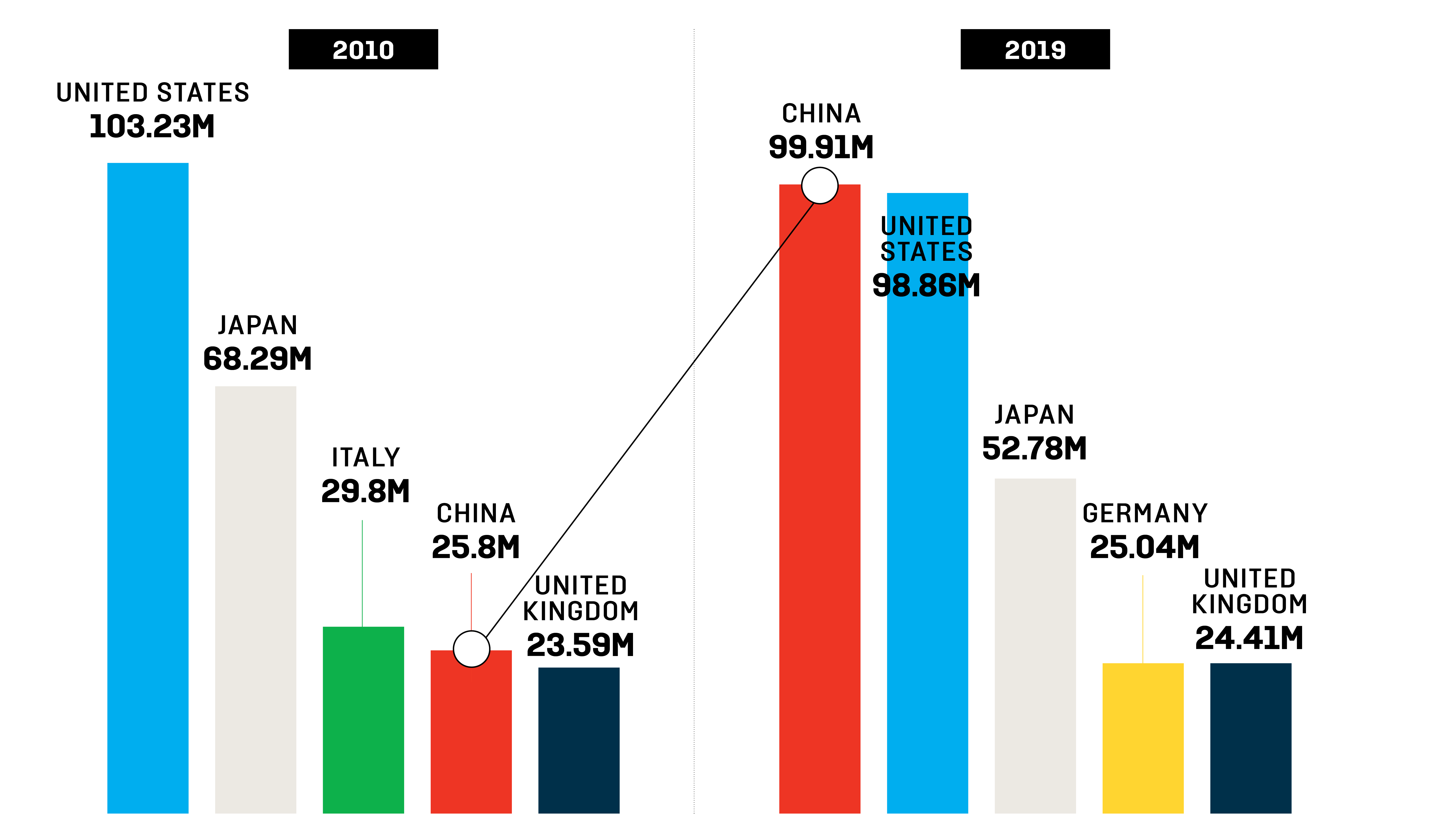 10. The Graying of China

The bigger worry remains that China might get old before it gets rich. China’s demographic future looks gray, and the country is unprepared for it. Hopes that lifting the one-child policy would produce a baby boom have been dashed by the growing cost of raising a child in China. The balinghou, the generation born between 1980 and 1989, are set to be particularly pinched economically: caught in an inverted pyramid of caring for two sets of aging parents while also sending a kid to school.

NEW FOR SUBSCRIBERS: Want to read more on this topic or region? Click + to receive email alerts when new stories are published on Politics, Economics, China, Hong Kong

Avoiding actual war will be on each side’s mind.