Can the Democrats Reinvent Themselves in Time to Win in 2020?

The Democratic Party is still fatally divided over outdated ideologies, proving the left hasn't yet learned the lessons of its 2016 defeat or the recent walloping of Britain's Labour Party. 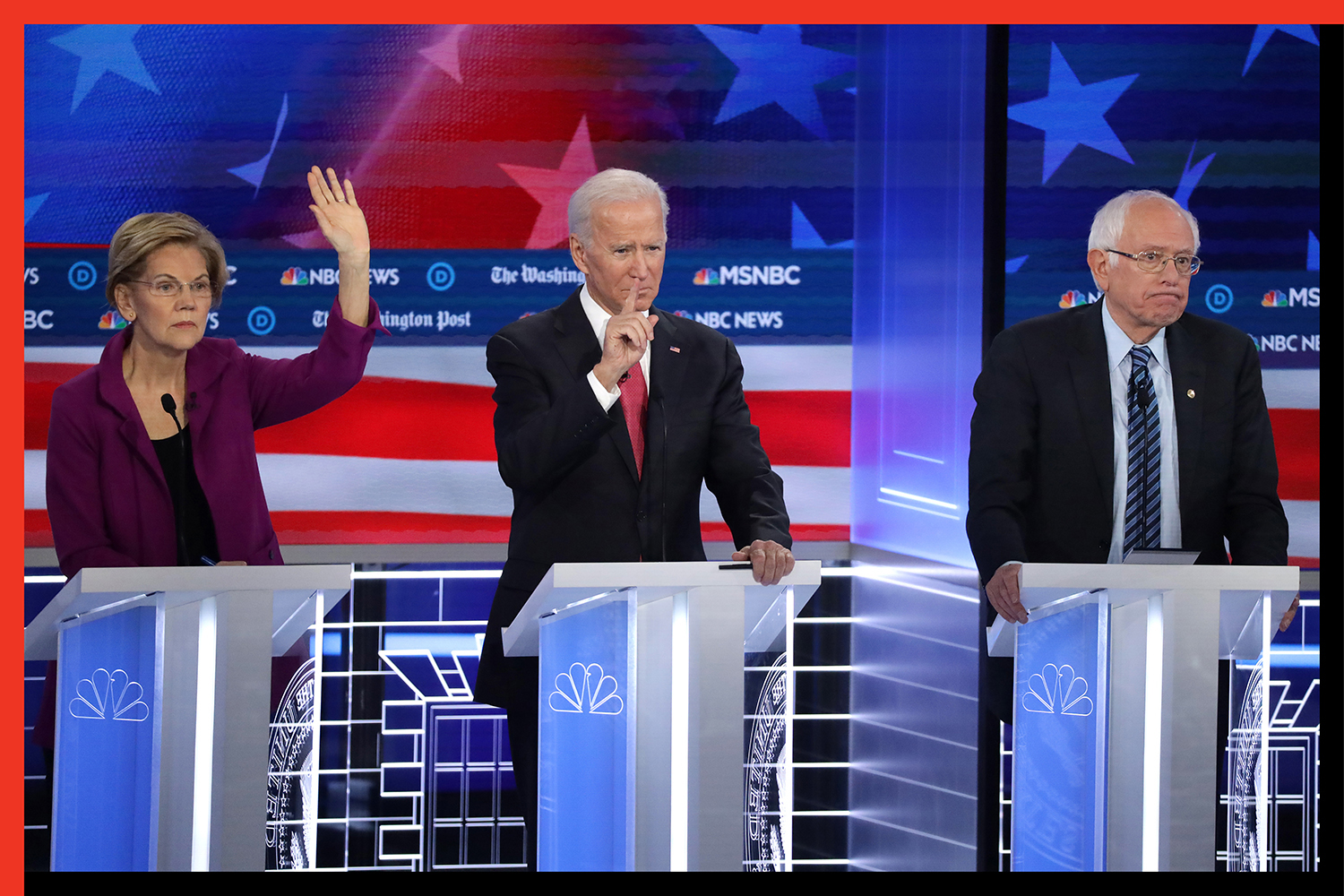 You can’t win with the old ideologies. That is the lesson the right has learned over the last few years, beginning with Donald Trump’s stunning upset of his mainstream Republican rivals and then another mainstreamer—Hillary Clinton—in the 2016 election and culminating in Brexiteer Boris Johnson’s decisive victory in December over Jeremy Corbyn’s hapless Labourites in the United Kingdom.

But the evidence so far is that the Democrats have not yet learned this lesson. As they head into election year 2020, they remain bitterly divided over the same hoary ideas—an ideological schism that could cost their party as dearly in November as it did the Labour Party in December 2019, even though the Democrats are now running against an impeached president.

In the recent British election, the Labour Party was as stunned by the Tories’ breaching of its “red line”—its tried-and-true working class and rural districts—as Democrats in 2016 were gobsmacked by the loss of their “blue wall” in critical states such as Pennsylvania, Michigan, and Wisconsin, where erstwhile working- and middle-class Democratic voters gave the election to Trump.

For the left in general, the key to winning is: Stop being so stunned. Acknowledge once and for all that the very mainstream voters you are trying to reach reject the old ideologies. Above all, move beyond those ideas. This is not yet happening: Left-wing politicians continue to reach for their favorite old nostrums like amputees grasping with phantom limbs. Corbyn, for example, was roundly criticized after the British vote for falling out of touch with the electorate with a smorgasbord of traditional left-wing promises, including free care for the elderly and free university tuition, even free broadband. And he and other party leaders remained fatally ambivalent about Brexit.

The Democrats have done little better in raising their game. We already know that the old familiar Democratic centrism—the Reaganism-lite perfected by Bill Clinton, embraced by Barack Obama, and fecklessly re-marketed in 2016 by Hillary Clinton—isn’t going to work, but neither, judging from current trends, is the warmed-over socialism (or democratic socialism) identified with the two leading 2020 progressives, Sens. Bernie Sanders and Elizabeth Warren.

To be sure, both Sanders and Warren look more formidable than Corbyn, who was deeply unpopular and uninspiring going into December’s vote; Labour’s slide to the far-left occurred in part because of rule changes that allowed him to become head of the party despite the opposition of most Labour members of Parliament. Sanders still fires up his liberal Democratic base—as his recent surge in the polls shows—and Warren has put out some interesting new market-based ideas, like her bill to give workers more say on corporate boards and therefore in their communities. Even so, both candidates may be close to hitting an electoral ceiling, failing to connect with the moderates and independents they’ll need to win. Warren in particular has shown a stubborn unwillingness to back away from expensive government solutions like Medicare for All.

And with a little over ten months to go before the election, many Democrats know they are likely to lose in 2020, just as they did in 2016, if they don’t find a way to resolve the ideological war that still splits the party.

Both Sanders and Warren may be close to hitting an electoral ceiling, failing to connect with the moderates and independents they’ll need to win.

The evidence is that the poll numbers consistently show a wide spread of support along the centrist-progressive spectrum—with former Vice President Joe Biden, Warren, and Sanders all eking out still-small pluralities—indicating the party remains stuck in its existential funk. “That’s why you’re seeing poll numbers not move much at all, because these wings continue to exist,” said Patrick Murray, the director of Monmouth University’s Polling Institute.

“If you get a candidate who’s too far to one side or the other, about half of the electorate is going to be really upset by that. You have a natural foil in terms of generating enthusiasm in [opposing] Donald Trump, but that could be tempered by a nominee who can’t pull the party together.”

The right, by contrast, has been engaged in the task of casting out old verities and embracing new ones—if recklessly, in the eyes of many critics. To become victorious, the Tories and Republicans also had to become unrecognizable. Trump turned a party identified with free trade and fiscal discipline into a protectionist, profligate monster; he transformed traditional conservatism into xenophobic neonationalism that appealed to the displaced working class. Johnson baked his savory (if possibly toxic) Brexit pie by doing something very similar ideologically to the Conservative Party of his misguided predecessors, David Cameron and Theresa May.

If the Democrats (and Labourites) are to make good, they’ll need to effect a similarly dramatic self-transformation—though one would hope in a less demagogic way. “Trump just threw the Republican Party’s identity out of the water. You can’t really call it the Republican Party any longer; it is the party of Trump,” Murray said. “But the Democratic Party is just simply two wings that have coexisted for so long and are coming to loggerheads. That’s the battle we’re looking to right now, and we just don’t know how it’s going to come out.”

For nearly four years since 2016, both wings of the party have been so mistrustful of each other that no real synthesis, no emergence of a new set of ideological talking points, seems possible. Warren’s fading candidacy is evidence of this: the Massachusetts senator, after frightening many mainstream Democrats with her nearly $52 trillion take-it-or-leave-it Medicare for All plan—you have to accept the public insurance we’re giving you, and there won’t be any other option—sought to temporize by pledging a delay in implementation if she becomes president. But it may have been too late; Warren was already branded a radical.

If the Democrats don’t rustle up more unity than they’ve got now, they stand in danger of repeating the Republican mistake of 2012 and the sad spectacle of Mitt Romney.

In the end, the Republican reckoning was about an establishment that couldn’t acknowledge the failure of 30 years of debunked trickle-down delusions. After the 2008 crash and a last-gasp rebellion against big government that was the Tea Party, this vacuum of ideas is what allowed a neophyte demagogue to destroy Reaganism in a single cycle. (The Tea Party, it turned out, wasn’t really libertarian, as Sen. Rand Paul found when his 2016 presidential bid crashed and burned; it was mostly racially redistributionist, a white-ethnic rejection of brown-skinned beneficiaries, which is why Trump was able to absorb it into his movement without a trace.)

The Democrats still have not had their own reckoning. And if they don’t resolve these issues and rustle up more unity than they’ve got now, they stand in danger of repeating the Republican mistake of 2012 and the sad spectacle of Mitt Agonistes: when Mitt Romney, the Republican nominee, tied himself into an ideological pretzel by trying, and failing, to reconcile his centrist, pragmatist record as Massachusetts governor with the new ideological demands of the Tea Party base. (Never so jarringly as when he distanced himself from his signature accomplishment, Romneycare, the model for Obamacare.) By Election Day, Republicans didn’t know which Romney they were voting for, and they came out in tepid numbers. The only thing uniting the party was hatred of Obama, and it wasn’t nearly enough.

Similar lessons apply to the Democrats in 2020. In the longer run, “Dump Trump” is hardly more appealing as a positive message than “Stronger Together” was for Hillary Clinton. (And let’s be frank: It wasn’t Russian hacking or the indiscretions of former FBI Director James Comey that mainly cost Clinton the election; it was that she had no coherent message other than “don’t vote for him.”) Even with impeachment staining Trump’s presidency, the Democrats need to find a fresh-sounding positive message to counter him. They’re not even close.