The Year of the Trade Truce 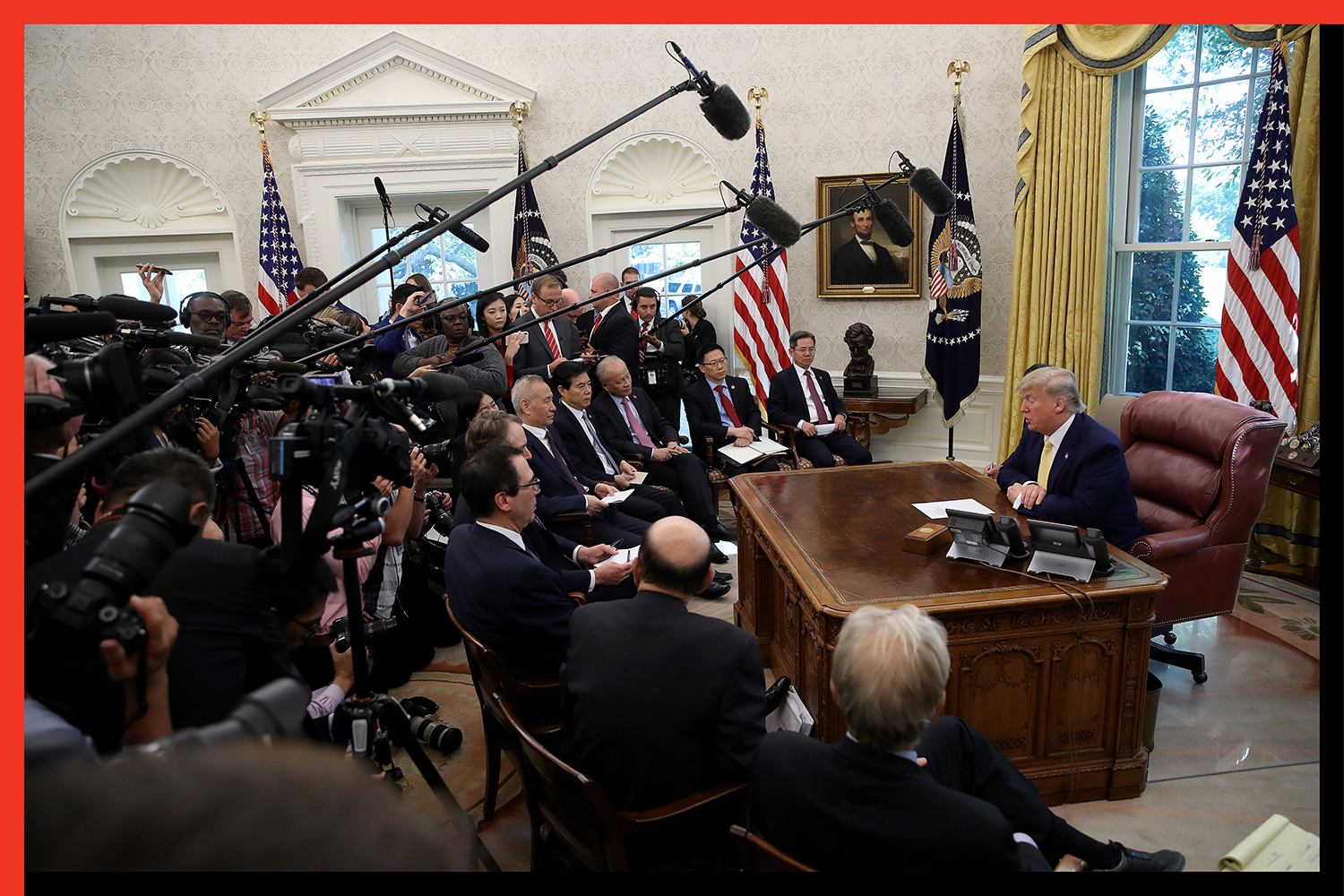 U.S. President Donald Trump meets with Chinese Vice Premier Liu He and members of the U.S. and Chinese trade negotiation teams while announcing a “phase one” trade agreement with China at the White House on Oct. 11. Win McNamee/Getty Images

Impeachment used to be a big deal. The 1868 impeachment of U.S. President Andrew Johnson paralyzed Congress for three months, and the Senate came within one vote of removing him from office. President Bill Clinton’s 1999 trial lasted five weeks, with many Republicans joining the minority Democrats in rejecting the charges. President Donald Trump’s trial could be over in a day, if Senate Majority Leader Mitch McConnell sees no political benefit in prolonging it. Even if it goes on longer, Trump will be exactly where he most likes to be: at the center of attention.

Thinking back to the early days of the Trump presidency, no one would have been surprised by the thought that, within three years, he would be impeached. People might be considerably more surprised to hear that he would successfully renegotiate the North American Free Trade Agreement and obtain broad congressional support for the new deal. They would be even more shocked to discover that mainstream political opinion had swung behind his trade war with China.

Not that many pundits would be caught dead saying it. But U.S. and global public opinion has swung so decisively against China that it is now almost unthinkable that anyone would take China’s side in the trade war. It is hard to imagine Chinese President Xi Jinping receiving a standing ovation at Davos this month, as he did at the 2017 World Economic Forum. Back then, the global elite bizarrely looked to this unreconstructed communist dictator as the savior of the liberal international order. Now, he is even more anathema than Trump.

Xi’s constitutional rejection of term limits, severe repression of Xinjiang Uighurs, and strong-arm response to pro-democracy protests in Hong Kong have put paid to any lingering pro-China sentiment among the global commentariat. That doesn’t mean they want to back Trump, of course, but they can’t be seen supporting China.

If it is unwarranted to credit Trump’s “America First” policies for all of the economic successes of the last three years, it is even harder to make the case that his trade war with China has done much to slow them.

Moreover, with the U.S. economy booming, unemployment at historic lows, and real wages finally rising after decades of stagnation, it’s hard to spin the narrative that the trade war has hurt the United States. Even the most recent spate of poignant bankrupt farmer stories misrepresent the facts: Agricultural commodity prices are in free fall all over the world, not just in the American Midwest. Brazilian soybean prices have fallen just as much as U.S. prices. Meanwhile, ever-fickle stock markets refuse to cooperate with trade war catastrophism: Major indices have risen roughly 50 percent since Election Day 2016, while volatility has declined.

If it is unwarranted to credit Trump’s “America First” policies for all of the economic successes of the last three years, it is even harder to make the case that his trade war with China has done much to slow them. To do so implies that the economy would be doing even better if Trump had left well enough alone. But whatever one thinks of Trump or his tactics, all was not well in the U.S.-Chinese trading relationship three years ago. And although things have not gotten better yet, there are good reasons to believe that they are on the right track.

Despite all the heated rhetoric of Trump’s first two years in office, the actual trade war almost never happened. Back in April, before the bulk of the U.S. tariffs took effect, the United States and China came very close to a deal. Negotiations broke down over China’s refusal to submit to regular monitoring and effective enforcement mechanisms. Major U.S. tariffs on Chinese goods only took effect on May 10. And even these offered an exemption for goods already in transit, meaning that China has been subject to serious tariff pressure for only the past six months or so.

The “phase one” deal announced in December hardly loosens the screws. It mostly promises not to tighten them, in exchange for increased (and presumably state-directed) Chinese purchases of U.S. goods. Cue even bigger commodities stockpiles on China’s wharves and in its warehouses. The simple fact is that China doesn’t much need what the United States has for sale. What China really needs is technology—and that’s exactly what the United States is reluctant to sell.

If there is no phase two of the trade deal, China’s economy will continue to suffer.

So this isn’t so much a trade deal as a trade truce. It doesn’t address the very real problems that prompted the trade war in the first place: rampant intellectual-property theft, state-sponsored industrial espionage, forced technology transfer, and China’s failure to live up to its 2001 World Trade Organization accession commitments to open its finance and technology sectors to foreign competition. China has made vague promises to crack down on counterfeit goods, but that is a process that has been ongoing in some form for most of this millennium.

Then again, Trump hasn’t given up much, either. September’s tariffs will be rolled back by half, but the much larger May tariffs will stay in place. New tariffs will be put on hold. If there is no phase two of the agreement, though, China’s economy will continue to suffer. Six months of tariffs were enough to bring China to the negotiating table. Another year or two could cripple its economy.

It seems possible that this truce will turn out to mark the high-water point of U.S. tariff pressure on China. Active tariffs are still substantial (most Chinese goods face a 25 percent import levy) and will remain in place until China is ready to negotiate a bigger deal. Chinese countertariffs on U.S. goods are not a credible threat.

Xi may be hoping for some relief if Trump loses the 2020 election, but a year is a long time to wait. Even worse (for China), there is no guarantee that a prospective Democratic administration would be eager to ease the pressure. Just as the Trump administration has continued to enforce (and even tightened) the previous administration’s sanctions on Russia, despite expectations of a thaw, a future Democratic president might feel pressured to out-Trump Trump on China. Unless China dramatically improves its human-rights record—a very unlikely prospect—any post-Trump Democrat would be very reluctant to be seen as a China dove.

After three years of steady escalation in the U.S.-Chinese trade war, we have reached the end of the second act. First came the rhetoric, then the pressure. Now we await only the denouement. Its basic narrative is now almost inevitable. The impeachment trial will pass, and the 2020 election will pass, but U.S. pressure will continue to be exerted firmly and consistently until China gives in. China simply can’t afford to give up the U.S. market, and it will have to amend its behavior eventually. If the “phase one” deal is any indication, “eventually” may come sooner than anyone thinks.

Salvatore Babones is an adjunct scholar at the Centre for Independent Studies in Sydney. Twitter: @sbabones