The crisis in Xinjiang began to receive global attention this year, but Foreign Policy has been reporting on the camps for nearly two years. Xinjiang, a Chinese border region where most residents are not Han Chinese but Uighur or other Turkic minorities, and where the Chinese government has only a tenuous historical territorial claim, has long chafed under Beijing’s rule. Discontent turned into mass violence in July 2009, when riots in Urumqi prompted a state crackdown that has continued ever since.

Xinjiang had never been a model of peace, but communities that had learned to live together to a degree were driven sharply apart. Some Uighurs turned to violent insurgency, although Beijing denied the scale of the problem for many years while responding brutally on the ground. The Kunming terrorist attack of 2014, when the violence spilled beyond the borders of the region itself, was a gruesome turning point.

That drove Islamophobia and anti-Uighur bigotry across China, which resulted in the mass expulsion of the majority of Uighurs from other parts of China between 2014 and 2016. They had always faced a heavy degree of prejudice in the rest of China, painted as violent and criminal and regularly turned away from hotels. But the post-Kunming atmosphere often criminalized simply being Uighur outside Xinjiang, especially for those who didn’t hold an official hukou (a residence permit for a city granted only for particular types of jobs). The street vendors and migrant workers who made up most of the diaspora inside China were forced back to Xinjiang.

That made the region even more unstable, prompting a sweeping attempt to eradicate Uighur culture combined with the establishment, in late 2017, of a network of camps that grew to hold over a million Uighurs and other Turkic minorities such as Kazakhs. These camps were described as “reeducation” facilities by the Chinese authorities; virtually any perceived offense, from having traveled overseas to owning a tent, was enough to result in detention. Han Chinese spies were installed in Uighur households to monitor them for what the monitors described as “uncivilized” behavior, while Xinjiang transformed into a surveillance state, using both human labor and facial recognition. This year, the story kept developing—and the picture of life in Xinjiang grew even darker.

At the beginning of 2019, Foreign Policy senior editor James Palmer wrote of how the Islamophobia key to Xinjiang’s atrocities was putting China’s other Muslims at risk. Most of China’s more than 20 million Muslims are Hui—largely indistinguishable from their Han counterparts except in the matter of religion, and subject to far less prejudice than Uighurs. “Today, though, the intensity of the anti-Islamic campaign in Xinjiang has resulted in other provinces adopting the same ideas, lest their leaders be accused of being soft on terrorism or of having ideological sympathy for Islam,” Palmer wrote—a concern picked up by other outlets with detailed reporting later in the year.

2. Detainees Are Trickling Out of Xinjiang’s Camps

Gene Bunin, the organizer of Shahit.biz, which gathers testimonies from detainees’ friends and relatives, reported that the first releases from the camps were taking place: “However, they are not the happy endings that one would like to envision, as nearly all imply broken families or some sort of tragedy and trauma.” These initial releases were largely of Kazakhs, thanks to the greater scope for public pressure in Kazakhstan and some behind-the-scenes efforts by Kazakh officials. More detainees would be released later in the year, but, as Bunin noted, largely into house arrest or forced labor, while many others would be transferred from the camps to prison.

Bunin followed up that reporting in March with an extensive story on the Kyrgyz, many of them noted artists, scholars, musicians, who had vanished into Xinjiang. “Perhaps the most striking aspect of their absence is the total dissonance with official Chinese rhetoric: that the detentions in Xinjiang are just a caring government’s way to provide ‘training’ and ‘education’ for those residents who have fallen behind, who lack the skills to make a proper living, and who by their provincial nature have become vulnerable to ‘extremist thoughts,’” he noted. The article helped prompt pressure from Kyrgyzstan and the later release of some of the Kyrgyz named. 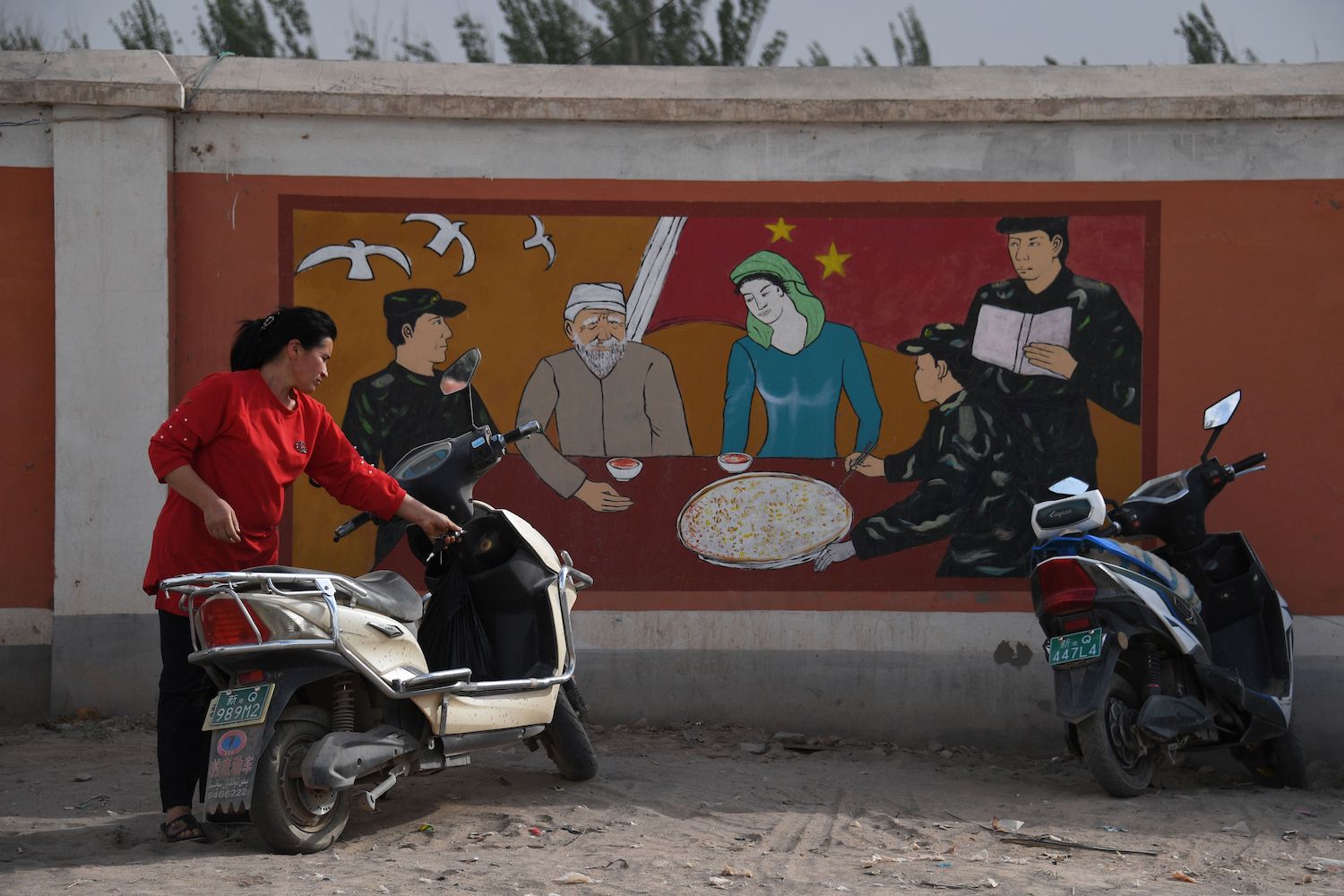 A Uighur woman stands beside a propaganda painting showing soldiers meeting with a Uighur family, outside a military hospital near Kashgar in China’s northwest Xinjiang region on July 2. Greg Baker/AFP/Getty Images

3. The World Bank Was Warned About Funding Repression in Xinjiang

Bethany Allen-Ebrahimian, a specialist in Chinese influence abroad, broke in Foreign Policy the news that the World Bank had been warned about its funding of Xinjiang camps: “In a copy of the email reviewed by Foreign Policy, the employee, who requested anonymity as they were not authorized to speak to the press, listed numerous issues perceived as red flags and suggested that the program should be referred to an internal inspection committee for investigation to ensure that World Bank rules were being followed. These concerns went unheeded.” Allen-Ebrahimian would follow up this reporting with other revelations about China’s attempts to manipulate the World Bank.

4. I Was a Model Uighur. China Took My Family Anyway.

Chinese claims in July that “most people” had been released from the camps were belied by the testimony of Nur Iman, whose entire family has been vanished. In a passionate account, she detailed her parents’ and brother’s lives before detention. “My father is 54 years old and owns an auto business; my mother is a 50-year-old housewife. Neither of them are terrorists or extremists or in need of reeducation to do the work they have done successfully for decades. They were snatched from their home at No. 035, Saybag Town, Shufu, Xinjiang.” Iman’s family remains in detention.

Scholar Adrian Zenz—an expert on Chinese data who developed some of the earliest concrete estimates of the scope of the camps—described the role that coerced labor has come to play in Xinjiang. “The irony of placing interned Uighurs into labor-intensive sweatshops is that many of them were extremely skilled businesspeople, intellectuals, or scientists,” Zenz wrote. “But for Beijing, the real aim is not to improve Uighurs’ lives. It is to achieve so-called social stability in its most extreme form imaginable: the state controlling the educational, work, and care placement of every family member, however old they are.” That coerced labor now taints every part of the Xinjiang supply chain—which includes cotton used by Western textiles firms.

The United States has slapped sanctions on companies tied to Chinese repression. That may be just the start.