Will Boris Get Brexit Done?

The British prime minister won an electoral triumph. But can he cut the Gordian Knot of leaving the EU?

The debate over Brexit has paralyzed British politics for more than three years, since the June 2016 referendum that put the United Kingdom on the path to exiting the European Union. After former Prime Minister Theresa May’s failed attempts to pass a deal, paralysis in Parliament, a push for a second referendum, legal wrangling, and rising political tensions, Prime Minister Boris Johnson’s landslide election on Dec. 12 seems to have finally solved the issues in the legislature.

With 365 seats out of 650 in the House of Commons now held by the Conservative Party, Johnson should have no trouble passing the necessary legislation to push Brexit through by Jan. 31, as he has promised. Yet though “getting Brexit done” may get voters to stop paying attention, it won’t settle the issue. Indeed, negotiating a post-Brexit trade deal will be Johnson’s next—and arguably more difficult—task, especially given his self-imposed deadline of December 2020 for a final trade agreement. In other words, the question of what shape Brexit will actually take is far from settled.

Foreign Policy has been following the twists and turns of the Brexit debate throughout 2019, publishing articles on the key players inside Parliament and on Downing Street, the economic challenges and benefits Brexit could bring, and the view from Brussels and European capitals—not to mention Edinburgh and Belfast—as Johnson heads for the exits, leaving major questions about Scotland, Northern Ireland, and the future of the United Kingdom unanswered.

Here are five of the year’s most important articles on British politics and Brexit.

1. Can Brexit End the Scourge of British Nativism? Dominic Cummings Thinks So.

Since Johnson’s arrival at No. 10 Downing Street in July, the chattering classes have been obsessed with his Machiavellian advisor, Dominic Cummings, the architect of the 2016 Vote Leave campaign. For London’s liberal intelligentsia, Cummings is the evil genius behind a xenophobic, regressive project. In August, British writer Sahil Handa offered a different interpretation, arguing that Cummings’s primary goal is to permanently neuter the far-right in British politics and marginalize politicians such as Nigel Farage, the leader of the Brexit Party, whom he detests. “In laying out his own vision for a post-Brexit Britain, Cummings barely mentions national identity,” Handa noted. “His concerns are structural, not cultural—he is preoccupied with free trade, not ethnic replacement.” After Johnson’s win, Cummings is being feted as the mastermind of a winning electoral strategy and will have even greater influence over the prime minister. If nativism was never his goal, expect the Tory government to tack to the center on cultural issues such as immigration while doubling down on a free-market agenda.

2. Boris Johnson Doesn’t Want a No-Deal Brexit. He Wants to Win an Election.

Four months before Johnson triumphed at the polls, at a time when Remainers worried that an unelected prime minister was trampling on democratic norms and ramming through a hard Brexit, Aleks Eror argued in Foreign Policy that Johnson wasn’t interested in a no-deal Brexit, as many feared—he was merely playing to the crowd and riling up hard-line Brexiteers whose votes he would need later. This, Eror argued, “depends upon provoking hostile members of Parliament into blocking no-deal and forcing him to seek yet another extension to the Article 50 deadline so he doesn’t have to suffer the consequences of climbing down on his own accord.” Johnson did just that and now he has won an election. Whether that will satisfy him and his supporters and end the threat of Britain crashing out of the EU without a deal is a question for 2020. 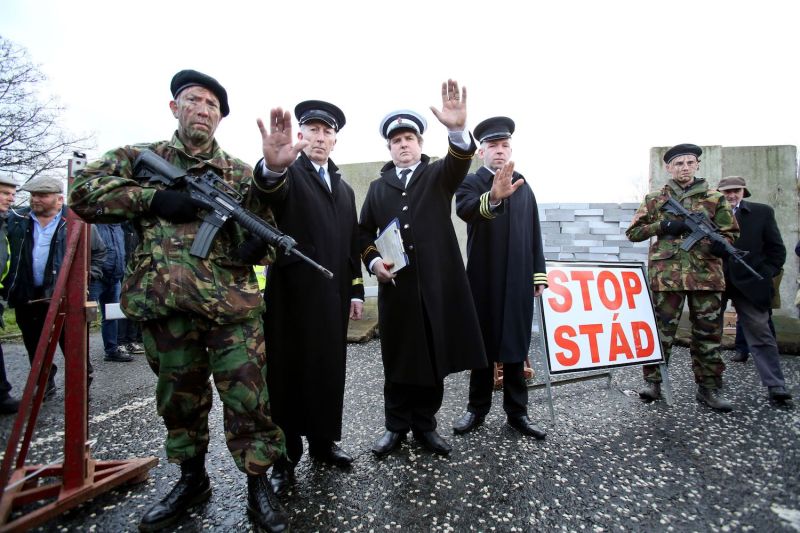 Members of the anti-Brexit campaign group Border Communities Against Brexit, dressed up as British Army Soldiers and Customs officials, pose with a wall installed on a road crossing the border between Northern Ireland and Ireland, during a demonstration in Newry, Northern Ireland, on Jan. 26. PAUL FAITH/AFP/Getty Images

3. Brexiteers Bear All the Blame for the Irish Border Impasse

British politicians don’t pay much attention to Northern Ireland and the Irish border, and the Brexit debate has made their disregard for the issue even clearer. In August, as Johnson argued he would negotiate a new and better deal with the EU, Brexiteers began blaming the Irish for the border impasse. Mary C. Murphy of University College Cork argued in Foreign Policy that “Brexit threatens this open border by potentially re-erecting physical and psychological barriers between Northern Ireland and the rest of the island. This unsettles and undermines some of the fundamental features of the Northern Ireland peace settlement.”

During May’s premiership, the border became the primary sticking point in Brexit negotiations. That has changed in recent months. Under Johnson, the Conservatives’ erstwhile allies in the hard-line Northern Irish Democratic Unionist Party (DUP) have been thrown under the bus with what amounts to a customs border now being erected in the Irish Sea between Britain and Northern Ireland in order to keep the land border on the island of Ireland open. The DUP lost seats in December, and the Tories no longer need them after having won a commanding majority in Parliament.

At the height of Britain’s constitutional crisis in August, after Johnson prorogued Parliament and set off weeks of legal wrangling, economist Adam Tooze argued in Foreign Policy that the British needed the queen to exercise her power rather than simply stand on the sidelines. “The fact that electoral politics can be both arbitrary and subject to deadlock is why most constitutions provide for circuit breakers in the form of judicial review, multitier legislatures, and the separations of prime ministerial and presidential role,” he wrote, suggesting that this was a moment for the queen to act as head of state. “What the U.K. crisis reveals is why such constitutional arrangements matter.” The monarch did not break the deadlock in the end and gave her approval to Johnson’s move—but the courts eventually intervened to force Parliament to reconvene.

5. Boris Johnson’s Victory Is Exactly What the EU Wants

The morning after Johnson’s victory, Garvan Walshe—a former Conservative Party advisor—pointed out that Brexit would give the EU just what it needs: an even stronger negotiating position. “The EU, however, has made it clear it will impose what it calls “level playing field” conditions. … It’s afraid that the U.K. is so close that it could outcompete the EU by subsidizing its industries, deregulating its labor markets, and abandoning policies to fight climate change,” Walshe wrote. Therefore, he argued “Brussels will therefore make continued U.K. alignment with EU policies in these areas a condition of even the relatively basic trade agreement that Johnson wants.” More than anything, Brexit will allow the EU to get on with its own business “without worrying about bickering and indecisive Brits destabilizing their union,” he wrote.