Taiwan’s Election Is a Referendum on Its Identity

Victory for incumbent President Tsai Ing-wen is all but certain, shaping Taipei’s future relationship with Beijing.

Welcome to Foreign Policy’s weekly China Brief. The highlights this week: What to expect ahead of Taiwan’s general elections this weekend, China replaces its top representative in Hong Kong, and why capital is drying up for Chinese start-ups.

Welcome to Foreign Policy’s weekly China Brief. The highlights this week: What to expect ahead of Taiwan’s general elections this weekend, China replaces its top representative in Hong Kong, and why capital is drying up for Chinese start-ups.

Taiwanese voters go to the polls on Saturday in the most contentious elections since Taiwan’s transition to democracy. Incumbent President Tsai Ing-wen has made the election into a referendum on Taiwan’s identity, painting her opponents as ready to hand the self-ruled island to Chinese President Xi Jinping.

Victory for Tsai now seems certain. She is consistently polling at over 50 percent, while her primary challenger, the onetime rising star Han Kuo-yu, lingers at around 15 percent. In recent months, fortunes have changed for Tsai’s Democratic Progressive Party (DPP), which suffered a serious defeat in 2018 local elections. Even in August, Tsai was barely ahead of Han, but support for her has risen as his polling numbers have crashed.

In large part, that’s because of China’s response to the democracy movement in Hong Kong. Tsai’s DPP is ardently anti-Beijing. The main opposition party, Kuomintang (KMT), is increasingly associated with pro-China policy—despite its origins on the mainland as the Chinese Communist Party’s foe. The mainland attitude toward Hong Kong has hurt the case for reconciliation between China and Taiwan: The DPP’s most recent advertisement plays to this, explicitly linking Taiwan’s cause with Hong Kong’s.

Economic concerns. Han has argued that Taiwan’s economic prospects will be threatened if it remains hostile to mainland China. Initially, that worked with voters, but Taiwan’s relatively prosperous economy and record-low unemployment have worked against the narrative. Han, meanwhile, faces accusations that he has been surreptitiously aided by the mainland from the start. Concerns over Chinese influence have been a major part of the election, with the DPP blaming the KMT for disinformation campaigns.

Failed policy. Tsai’s likely victory will deal another blow to the Chinese Communist Party’s long-term strategy of “one country, two systems”: the idea that Taiwan could nominally accept Beijing’s authority while retaining its own laws for a period, as with Hong Kong and Macao. Beijing’s soft sell has failed, but the mainland obsession with Taiwan’s so-called return to China won’t go away. Military options may even start to look more palatable.

A replacement in Hong Kong. After Hong Kong’s pro-democracy candidates won in a landslide in the district elections last November, Beijing has replaced its top representative in Hong Kong, the head of the Liaison Office. The shift could mean Beijing is aware that the Liaison Office was telling it what it wanted to hear, not the information it needed. On the other hand, the new representative, Luo Huining, doesn’t speak Cantonese—making him even more dependent on others to stay updated. The office itself has been the target of protesters, though Hong Kong police have been on watch since it was stormed last summer.

The People’s Leader. Chinese President Xi Jinping received the title of the “People’s Leader” (renmin lingxiu) in August 2019. In December, it was formally approved by the 25-member Political Bureau that Xi heads. The term leader (lingxiu) was previously reserved for Mao Zedong and briefly for his short-lived successor, Hua Guofeng. The new title signals Xi’s unprecedented power but perhaps also his insecurity—especially as it comes alongside propaganda with increasingly Maoist overtones.

Still Tehran’s pal? China has sent messages of reassurance to Iran following the U.S. killing of Iranian military commander Qassem Suleimani last Friday. Despite Beijing’s long-term connections with Tehran, it could stand to benefit from a wider confrontation that draws the United States further into the Middle East. In private, Chinese analysts have described the Iraq War as buying China a decade. An Iranian conflict could give Beijing even more strategic space.

Tech’s long winter. Capital is drying up for Chinese start-ups, and the end of 2019 came with a painful reckoning: 336 startups failed at a cost of about $2.5 billion in venture capital, the Financial Times reports. Half of China’s biggest start-up failures came last year alone. The failures are a result of U.S.-China decoupling, the general economic slowdown, and political pressures on banks that have made lenders more cautious. Many of the casualties—such as Tuandaiwang, which collapsed in March—were in peer-to-peer lending. (Some were little more than Ponzi schemes.)

Major partners. China’s modern economic relationship with Iran goes back to 1974, when China began to look seriously for petroleum imports outside its borders. Those ties survived the Iranian revolution, despite the mullahs’ persecution of Iranian communists. Iran is a valued partner in China’s Belt and Road Initiative, while China has been Iran’s biggest trading partner in recent years—a relationship that might be strained by U.S. sanctions on Iran’s oil exports.

Imports and Exports Since 2010, In Billions USD 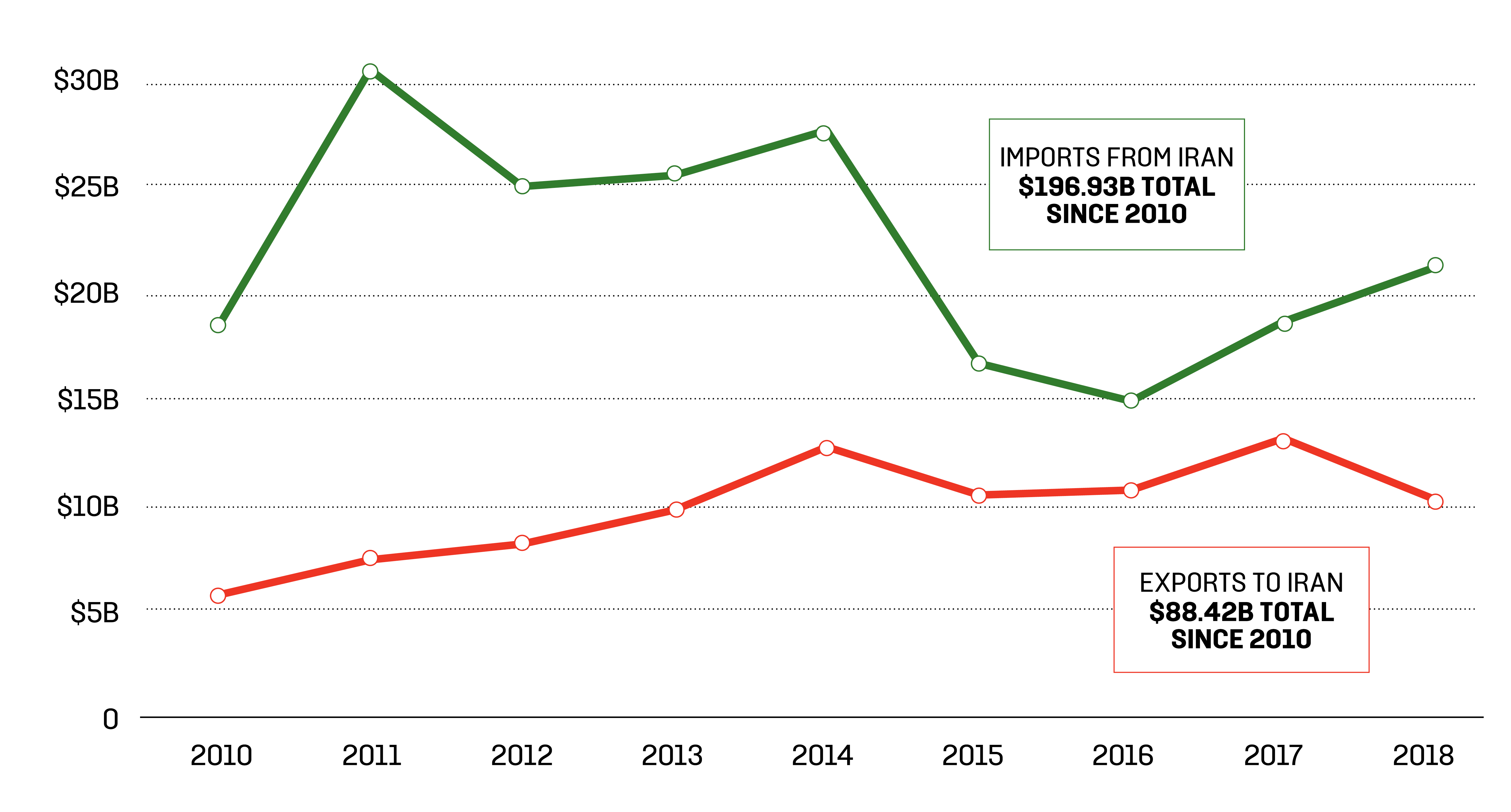 Pork prices likely to soar again. The Lunar New Year is a few weeks away, and as half of China prepares to go home to celebrate (and eat), people are anxiously watching pork prices, which are still high after African swine fever devastated Chinese herds last year. Pork prices rose from 20 yuan per kilo to 53 yuan per kilo in December. Despite relief after a release of pork reserves, prices are likely to surge again under the pressure of new year banquets.

Coal is back. Although smog levels this winter haven’t been as high as previous years, both residents and outsiders are concerned about China’s return to coal expansion. Chinese coal usage has grown in the last few years, despite China’s commitment to reducing its carbon emissions. That must end if China wants to meet its climate targets, a new report warns.

This 2014 article, brought to our attention by the political scientist Sam Crane, criticizes the myths of Confucianism dominating China’s past, or the idea that the 20th century was a violent anomaly. William Rowe, a China historian, points to cultures of exorcism, popular violence, and mob anger that simmered underneath a self-promoting elite during the Ming and Qing dynasties (from the 14th to the 20th century). The Qing state oscillated between colonial violence to enforce its borders and a frustrating series of civil disputes at home—an image that has echoes today.

NEW FOR SUBSCRIBERS: Want to read more on this topic or region? Click + to receive email alerts when new stories are published on Politics, China, East Asia