Is the World Getting Safer?

In 2011, the psychologist Steven Pinker published The Better Angels of Our Nature, a bestseller with a bold thesis: Almost every form of violence, including war, was on the decline. Thanks to the spread of Enlightenment values, Pinker argued, humans had become more peaceful and less bloodthirsty. Asked in a 2014 interview whether humans would ever return to their violent past, Pinker replied, “Well, how likely is it that we’re going to start throwing virgins into volcanoes to get good weather or that you’re going to have a return of slave markets to New Orleans? I think pretty unlikely.”

Pinker was not the first to forecast the end of war. The political scientist John Mueller made a similar argument in the late 1980s, maintaining that great-power war, like slavery, had gone out of style. As early as the first decade of the 20th century, no fewer than three books were published heralding the decline of war. The most famous of them, The Great Illusion, by Norman Angell, was published just four years before the start of World War I. (“How can we possibly expect to keep alive warlike qualities,” he wrote, “when all our interests and activities … are peace-like?”)

Into this debate steps Bear F. Braumoeller, a political scientist and statistician at Ohio State University, whose newest book, Only the Dead, undermines the decline-of-war thesis. Amid pages of data and statistical analysis, Braumoeller writes in prose lucid enough to be accessible to a lay audience. “For the last two hundred years at least,” he writes, “I can find no general downward trend in the incidence or deadliness of warfare. If anything, the opposite is true.” He warns, “It’s not at all unlikely that another war that would surpass the two World Wars in lethality will happen in your lifetime.” 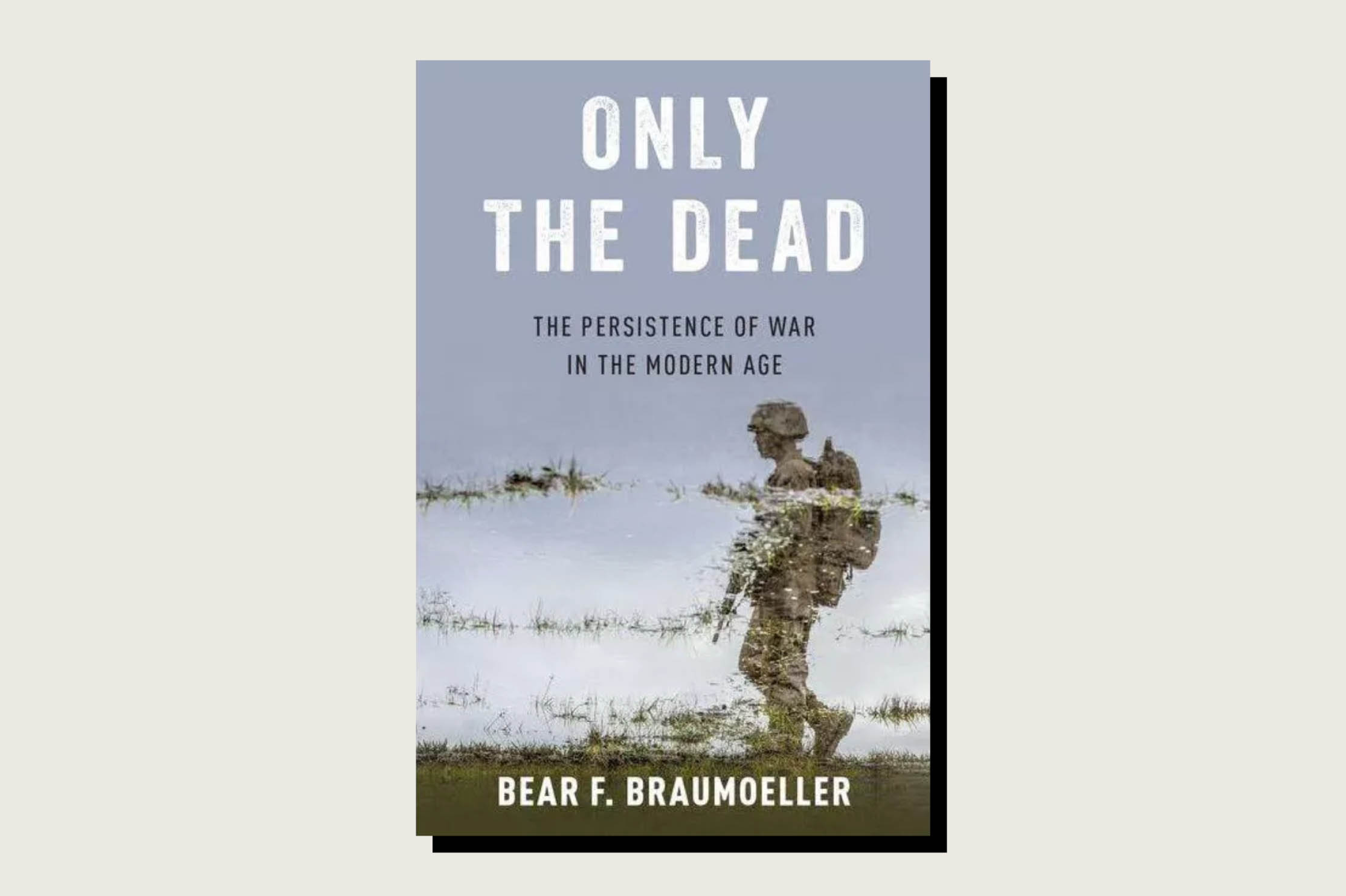 The disagreement between Braumoeller and Pinker stems primarily from a difference in how they understand the data. From World War II to the present day, international conflict does indeed appear to be on the decline. Zoom out, however, and the story looks less uplifting: Over the past two centuries, the rate of conflict initiation between countries has actually increased (Pinker’s graphs don’t show this, Braumoeller argues, in part because they include data only from Europe). Apart from the two world wars, the Cold War was the most conflict-ridden period since the Napoleonic Wars; the end of the Cold War was the first time the rate of conflict initiation fell in nearly 200 years. The rate of conflict initiation is a measure of how often states resort to force scaled by the number of opportunities for violence to occur. But Braumoeller argues that his findings hold pretty much no matter how war is measured; even when one evaluates the propensity of states to wage all-out wars, the Cold War was one of the most warlike periods of the past 200 years outside of the two world wars.

Optimists about the decline of war tend to dismiss one or both of the world wars as anomalies, focusing instead on the 70-year period known as the “Long Peace” that followed them. But without more rigorous statistics, it’s impossible to tell whether the seven-decade Long Peace since World War II demonstrates conclusively that the world has become more peaceful; it could just as easily have happened by chance. In an attempt to figure out which is more likely, Braumoeller uses formal statistical methods to separate the underlying rate of conflict initiation and war lethality from the noise of random variation. He finds that the deadliness of war hasn’t declined in the last 200 years, whether measured in absolute terms or relative to the combatants’ populations; that there has been no systematic downward trend in the potency of the causes of war; and that although the rate of international conflict initiation did fall at the end of the Cold War, it had actually been steadily rising until the 1990s.

From World War II to the present day, international conflict does indeed appear to be on the decline. Zoom out, however, and the story looks less uplifting.

Braumoeller’s analysis of the data is thoughtful and convincing. Perhaps his most troubling findings concern the potential for war to escalate. War, like earthquakes and terrorist attacks, follows an unusual probability distribution known as a power law: the overwhelming majority of the observations are relatively small in magnitude, but a few are extraordinarily large. Indeed, one of the great strengths of Braumoeller’s book is his attention to lesser-known but remarkably violent conflicts. For example, when you measure battle deaths as a proportion of the combatants’ populations, the two world wars are not even among the three most lethal wars of all time—they are surpassed by the Paraguayan War in the 1860s, the Chaco War between Paraguay and Bolivia in the 1930s, and the Iran-Iraq War in the 1980s. “Wars escalate more quickly, and reach more astounding sizes, than just about anything else found in nature,” he writes.

And once begun, as Braumoeller shows from his analysis of wars since 1945, wars retain the same devastating escalatory potential today that they displayed in 1913 or 1938. Today, Braumoeller calculates, the chance that a new war will escalate to be roughly as deadly as World War I stands at about 1 percent. The chance that a new war will produce almost twice as many battle deaths as World War II, in which around 65 million people died, is one in 200. That may sound low, but as Braumoeller points out, “If we keep fighting wars that pass the thousand-battle-death threshold at a rate of roughly one every other year, the probability of seeing such a war in the next century jumps to nearly 40%.” Just because great-power clashes have not spiraled into all-out war since World War II, “the escalatory dynamics that produced mindboggling carnage in the Paraguayan War, the Chaco War, the Iran-Iraq War, and the two World Wars are every bit as operational today as they were then.”

In addition to claiming to have data on their side, the proponents of the decline-of-war thesis also argue that a fundamental change in the conduct of international politics has occurred: War, they maintain, has become unthinkable. Some, like Mueller, attribute the shift to a change in attitude in developed countries; others point to the rise of peacekeepers and international organizations, or the deterrent effects of nuclear weapons. Pinker, for his part, traces the decline of violence to several overlapping factors, including what he calls a “civilizing process,” through which the consolidation of state power helped reduce violence within states, and a “humanitarian revolution,” an expansion of empathy that helped extend rights to people of all races and to women, led to the abolition of slavery, and fostered norms against warfare throughout the international system.

Braumoeller does not dispute that the emergence of modern states has suppressed violence within them. But he argues that violent competition between states is a different matter. The complexity of the international system makes it difficult to assume that the fact that people are becoming more peaceful—if true—will translate neatly into a fall in interstate violence. In an anarchic international system, where states must act strategically to maintain their advantage, there is little guarantee that a more pacifistic public will produce a less violent foreign policy or a more peaceful world. Germany’s decision to support Austria on the eve of World War I, for example, was based in part on a belief that other powers had embraced pacifism. One German diplomat argued that “England is absolutely pacific and France as well as Russia likewise do not feel inclined towards war.” As for nuclear weapons, there is a long history of claims that past military technologies have rendered war unthinkable, and while nuclear weapons may deter great-power conflicts from escalating, they have also created novel ways in which states could stumble into war, such as through the accidental launch of one of the hundreds of missiles the United States and Russia keep on “launch on warning” status.

One of the richest sections of the book is Braumoeller’s discussion of international order. While he finds no evidence of a general linear trend toward a less warlike world, Braumoeller does find what he calls “islands of peace” throughout history, periods in which international conflict is much less likely than it is in others. He attributes these islands to the emergence of international orders. The postwar Western order is one such example, but international orders do not always have to be liberal. The Concert of Europe, for example, founded at the Congress of Vienna in the aftermath of the Napoleonic Wars, was profoundly undemocratic, an attempt to make the world safe for reactionary imperialism and roll back constitutional reform across the continent; it was widely despised, especially by British liberals such as Lord Byron, Richard Cobden, and Percy Bysshe Shelley. And yet it kept the peace for almost four decades—the least warlike period on record in Braumoeller’s data.

International orders are a mixed blessing: While they tend to foster peace among their members, those members are prone to initiate war with third parties. Indeed, Braumoeller argues that the coexistence of multiple orders, such as those that existed before World War II and during the Cold War, make the world a much more dangerous place—especially when they are based on conflicting principles of legitimacy. If he is right, the only thing more dangerous than the collapse of the U.S.-led liberal international order would be a competition between it and a rival Chinese-led order characterized by authoritarianism, statist capitalism, and digital surveillance.

Today, with the conditions for a regional war in the Middle East riper than they have been for years, the liberal international order under strain, and the deterioration of U.S.-Chinese relations, Only the Dead makes for sobering reading. Braumoeller’s is the most serious response to Pinker’s claims so far. Pinker and the other optimists will no doubt respond in due course, and the debate will continue.

But getting the answer right matters. Whether intentionally or not, Braumoeller argues, the decline-of-war theorists encourage a certain kind of complacency: States have historically worked hardest for international peace when the dangers of conflict have been most apparent. In this, he echoes Henry Kissinger, who wrote in the 1950s of the passing of the Concert of Europe that the achievement of this era was “not inconsiderable: a period of peace lasting almost a hundred years.” Yet, he continued, it was “a stability so pervasive that it may have contributed to disaster. For in the long interval of peace the sense of the tragic was lost; it was forgotten that states could die, that upheavals could be irretrievable, that fear could become the means of social cohesion.” World War I shattered the complacency of this era; what will do the same for ours?

Nikita Lalwani is a student at Yale Law School.

Sam Winter-Levy is a Ph.D. student in politics at Princeton University. Twitter: @SamWinterLevy

Friends and foes alike no longer know where the United States stands. As Washington overpromises and underdelivers, regional powers are seeking solutions on their own—both through violence and diplomacy.

The Year Ahead |
Robert Malley
Latest