Amazon’s Jeff Bezos wants to invest billions in India’s e-commerce market. The country’s trade lobbies will be a powerful obstacle.

When Amazon founder and CEO Jeff Bezos decided to visit India this week, he may have imagined the country and its struggling economy would welcome him with open arms. It seems the opposite will happen. On Monday, India’s antitrust regulator ordered a formal probe of allegations that Amazon and Walmart’s Flipkart were promoting some brands over others—practices that would violate Indian laws requiring foreign-owned e-commerce businesses to be neutral marketplaces.

It’s not just legal trouble that awaits the world’s richest man in India. On Wednesday, a trade union representing 70 million brick and mortar retailers has planned protests in 300 cities. “Bezos and Amazon have already destroyed many small businesses and are now trying to build a false narrative of empowering small retailers,” Praveen Khandelwal, the leader of the Confederation of All India Traders, told Bloomberg.

Economic dilemma. New Delhi needs all the foreign investment it can get: New projections show that India’s economy will grow by just 5 percent this year. Given the immense potential market in India, major players such as Amazon and Walmart have long jostled for influence in the e-commerce space. But the small merchants whose trade lobby is organizing Wednesday’s protests control 90 percent of India’s retail, and they broadly support protectionist measures.

There is also often widespread opposition to privatization in India. Last week, banks and businesses closed as millions of workers protested against proposed government divestment from creaking enterprises such as Air India, Bharat Petroleum, and the Shipping Corporation of India. The workers fear the job cuts that would inevitably follow private ownership.

Local challenge. When India introduced new laws in 2018 barring foreign-owned companies from selling their own inventory—forcing companies such as Amazon to operate more like eBay and sell only third-party goods—it opened the door for local companies to exploit the e-commerce market. Reliance, the country’s biggest company by market capitalization, is jumping into the fray with Jiomart. If the platform succeeds, it could link up the millions of mom and pop stores around India, creating better supply chains. But it would be yet another sign to foreign companies that New Delhi can change its laws at any time to favor its own.

As shown below, India has the world’s largest population of people who have yet to use the internet—another reason why foreign companies such as Google, Facebook, Apple, and Uber see it as a massive potential growth market. 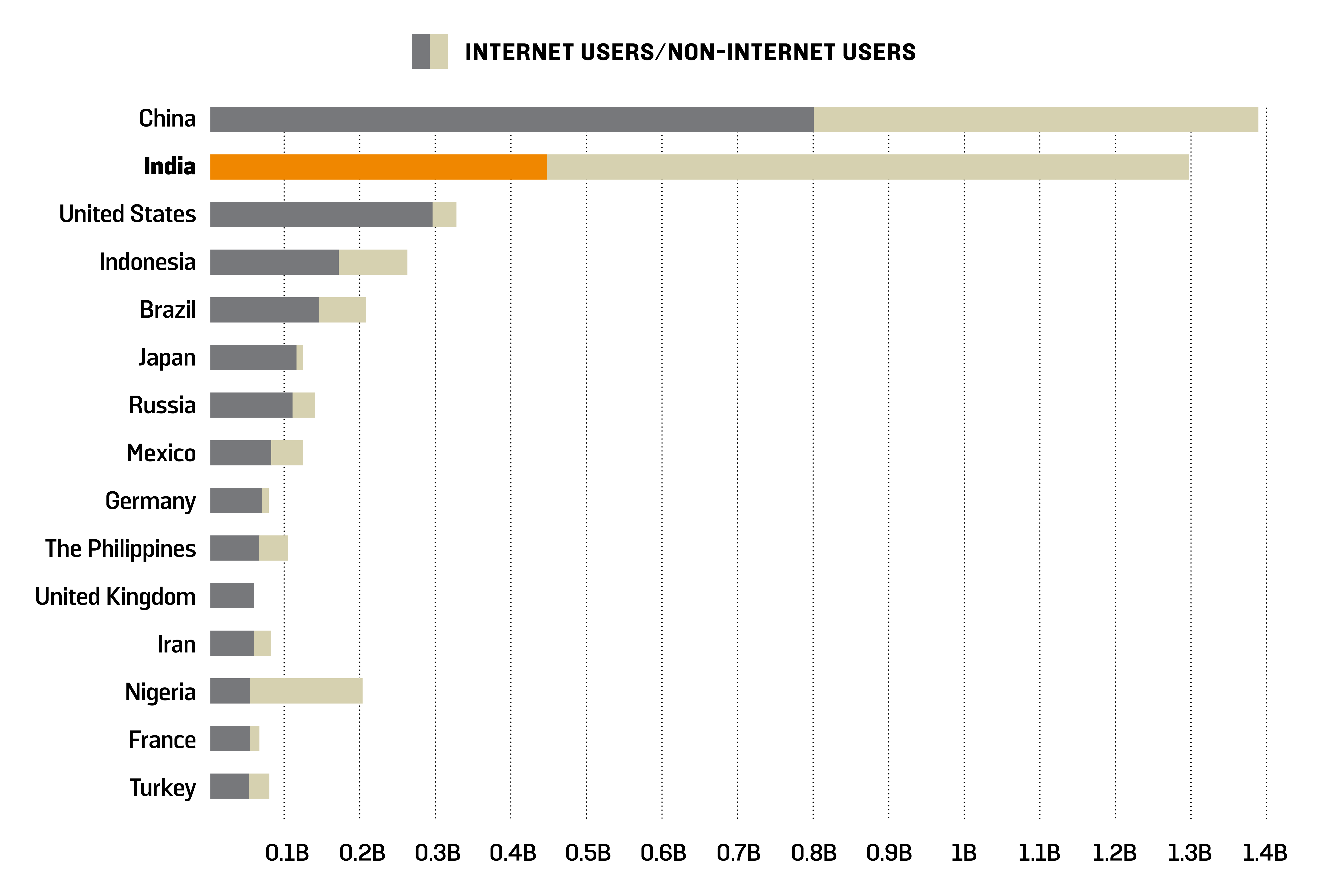 Pakistan overturns ex-dictator’s death sentence. A Pakistani high court on Monday overturned a death sentence issued to retired Gen. Pervez Musharraf, the military dictator who ruled the country from 2001 to 2008. The court said that the case, which alleged that Musharraf committed high treason and subverted the constitution, was politically motivated and that the special court that handled it was unconstitutional. Musharraf may be in the clear, but one of the problems that plagued his tenure, domestic terrorism, persists. Last Friday, a suicide bomber killed at least 15 people in an attack on a mosque in Quetta. The Islamic State claimed responsibility, saying it was targeting a Taliban seminary. (Local Islamic State branches are splinters from the Taliban.)

Will Kashmir go back online? Late last week, India’s Supreme Court ruled that internet access is protected by the constitution and gave the government one week to review its digital blackout in Indian-administered Kashmir—now the longest ever imposed by a democracy. Kashmiris have largely been without internet access since August 2019, just before Prime Minister Narendra Modi revoked Kashmir’s special status. India is a world leader in internet shutdowns, recording more than Pakistan, Syria, Iraq, and Ethiopia combined.

No refuge for Afghans. Tens of thousands of Afghan refugees cross the border into Iran in search of a better life every year. Against a background of regional turmoil, Iran has ramped up its efforts to deport them. In 2019 alone, the country sent more than 450,000 people back to Afghanistan—where many fall prey to human smugglers in desperate attempts to return to Iran, Ruchi Kumar and Hikmat Noori report for FP.

According to the United Nations High Commissioner for Refugees, there are as of 2018 around 2.4 million registered refugees from Afghanistan around the world. While many end up in Iran, the majority are in Pakistan. How many?

Oyo scales back. The Japanese conglomerate SoftBank’s troubles now extend to India. The Indian startup hotel chain Oyo, backed heavily by SoftBank funds, is eliminating 2,000 jobs around the world and cutting back on rooms. Oyo is one of several SoftBank-backed companies that have recently come under scrutiny: WeWork, the dog-walking startup Wag, and the delivery app Rappi have faced similar problems with overpriced valuations and job cuts. Earlier this month, the New York Times published an expose on Oyo’s questionable business practices, including potential bribes to government officials.

Off key. Police in Bangladesh arrested a renowned Sufi folk singer, Shariat Sarker, for “hurting the religious sentiment of Muslims” on Monday. The initial case against Sarker was filed by an Islamic scholar over comments made at a show last month and posted on YouTube. (Sarker reportedly said the Quran did not prohibit practicing music.) Hundreds of people protested last week calling for his arrest. At least 29 people have been jailed under the Digital Security Act passed in 2018, according to the human rights group Odhikar.

Don’t forget the elephants. For Sri Lanka, last year was record-setting—and not in a good way. A record 361 elephants died in the country 2019—mostly because of humans, according to a report this week. In Sri Lanka, elephants’ habitats are shrinking as farming expands, increasing contact and conflict between people and pachyderm, according to the Sri Lankan Centre for Conservation and Research.

The Afghan refugee population in Pakistan is one of the largest in the world. The majority of other Afghan refugees—1 million people—live in Iran.

NEW FOR SUBSCRIBERS: Want to read more on this topic or region? Click + to receive email alerts when new stories are published on Economics, India, South Asia