How to Reverse the World’s Trust Deficit Disorder

Public-private partnerships can solve the planet’s most vexing problems—but they need to focus on systemic change rather than single issues to succeed.

In the summer of 1999, a small and little-known think tank attached to the United Nations Development Programme published a book that transformed the global development discourse: Global Public Goods: International Cooperation in the 21st Century. Runaway globalization had created a “global public domain,” the authors argued. A shared pool of resources was being either undersupplied or overexploited. In a globalized world, advancing sustainable development became more than a moral obligation; it was in everybody’s enlightened self-interest. If the world has a glut of cheap palm oil but no forests, nobody thrives in the long term.

The idea of a global public domain caught the zeitgeist in an era of falling walls and regimes. At the beginning of the 1990s, the collapse of communism stigmatized big government, but then breakneck liberalization, privatization, and deregulation ended in a series of financial crises, humbling market maximalists, too. The experience of both government and market failure gave rise to a core pillar of the new narrative for international cooperation: Neither states nor markets had the means to build a functioning global public domain on their own; only a combined effort of all stakeholders would make a difference.

Public-private partnerships—already extensively used at the national level by governments in their quest for better public services at lower cost—became the new mantra for meeting the U.N. Millennium Development Goals. Yet, two decades into the new millennium, public-private partnerships still have not broken through into the mainstream. They are needed more than ever at a time where international cooperation is in crisis.

As U.N. Secretary-General António Guterres put it in his opening address to the General Assembly in 2018, the world is suffering from “trust deficit disorder”: Within countries, people are losing faith in political establishments, and polarization is on the rise; among countries, cooperation is ever less certain and more difficult. National interests are dictating foreign diplomacy, and at the grassroots level, young activists have little confidence in large corporations as a force for positive change.

In the early 2000s, public-private partnerships emerged as a potential win-win combination; they gave business a higher purpose and equipped advocacy organizations with business excellence. They were the centrist architecture of choice for fixing the trust deficit disorder of the hyperglobalization era. As Hillary Clinton explained in her farewell address as U.S. secretary of state, “Where once a few strong columns could hold up the weight of the world, today we need a dynamic mix of materials and structures.”

Today, public-private partnerships have lost some of their luster. The technocratic and top-down nature of many initiatives is seen by vocal critics as marginalizing their alleged benefactors, raising questions about their true intent. The mixed track record of the mechanism raises doubts about its effectiveness. According to the Sustainable Development Goals partnerships platform, only 290 of 3,900 initiatives currently registered—less than 8 percent—report being on track to reach their goals. Poor intervention strategies, failure to include key actors, and a lack of mandates and clear goals that could be monitored and governed have all been cited as reasons why many of these first-wave partnerships tended to fail.

Emboldened by rapid technological progress and financed by the entrepreneurs behind the digital revolution of the early 21st century, first-wave partnerships deliberately pivoted from a systems paradigm that was seen by economists like Jeffrey Sachs as bureaucratic and ineffective toward more targeted interventions.

The first wave of partnerships was characterized by a move away from existing national and international institutions toward bespoke bodies with narrow issue-specific mandates. The idea was to break a complex challenge (such as public health) into its component parts; single out specific parts (such as children dying of malaria); define clear, measurable metrics of success (such as reducing infection rates); identify means to improve on these metrics (by using insecticide-treated bed nets, for example); and assemble the right experts and resources to tackle the problem. 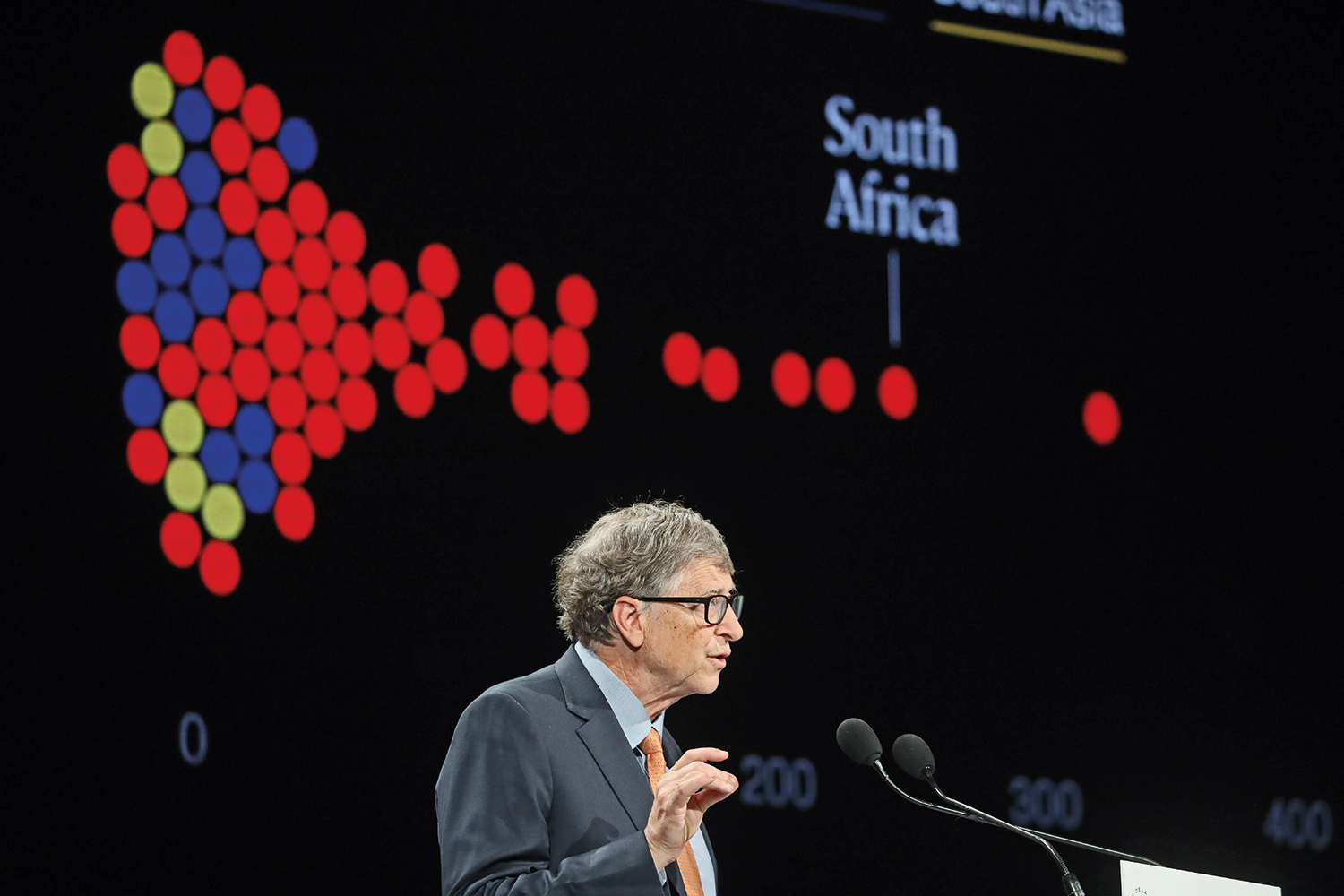 Microsoft co-founder Bill Gates speaks at the conference for the Global Fund to Fight AIDS, Tuberculosis and Malaria in Lyon, France, on Oct. 10, 2019. LUDOVIC MARIN/AFP via Getty Images

Issue-centered approaches did deliver impressive results in confronting complicated problems such as the development of drugs or vaccines through organizations like the Global Alliance for Vaccines and Immunizations and the Global Fund to Fight AIDS, Tuberculosis and Malaria. However, these kinds of partnerships have not been able to solve more complex challenges such as strengthening the effectiveness and inclusiveness of health care systems.

For a new generation of public-private partnerships to become more effective, the mechanism needs to rebalance from an approach that focuses on issues in isolation toward a more systemic approach that looks at the global public domain as a complex web of political, social, institutional, and technological factors and not just as a complicated engineering challenge. First and foremost, this will require a paradigm shift from a rigid top-down project architecture toward platforms and protocols. In a project paradigm, problem-solving is centralized. In a platform paradigm, actors unite behind a shared purpose and a joint mission but operate independently.

In the corporate world, the platform approach is well established. The online retailer Alibaba, for instance, does not own any warehouses, and the room-booking service Airbnb does not rent or own any real estate. Both focus on enabling the interaction between the components of the system without owning them.

An illustrative platform partnership example is the Platform for Accelerating the Circular Economy (PACE), co-chaired by the CEO of the Global Environment Facility, Naoko Ishii, and the CEO of the electronics manufacturer Philips, Frans van Houten. It brings together more than 50 partners and related initiatives under the common vision of creating a circular economy, in which waste and pollution are minimized and products and resources are recycled and regenerated. Though still nascent, platforms and protocols like PACE could help overcome the ideological divide between technocratic supply-side approaches to sustainable development and bottom-up demand-side strategies.

In a protocol paradigm, decision-making is even more decentralized. Protocols merely create a common means for otherwise unrelated efforts to interact, the way traffic signs help drivers move without bumping into one another. The so-called Hypertext Transfer Protocol (HTTP), for instance, is the foundation of data communication for the World Wide Web without any prescription on who should apply it or to what end.

The first generation of partnerships emerged in an era when global government was considered by many a feasible option and when big supranational organizations like the World Trade Organization (WTO) and the European Union were equipped with powers that limited and transcended the sovereignty of nation-states. Today, the WTO is facing imminent crisis; the dominant narrative of the European Union has been one of fragmentation, with large portions of electorates backing anti-EU policies; and since the fall of the Berlin Wall in 1989, the number of physical barriers delineating international borders has grown from 15 to 77. As a result, partnerships today inevitably must grapple with a more disjointed political landscape and with global challenges that have grown in severity and complexity, making the turn-of-the-century brand of technocratic top-down transnationalism neither feasible nor practical.

In the transition toward a more decentralized model of public-private partnerships, technology will play an important role, too. First-generation partnerships emerged at a time when the internet was slow, smartphones did not exist, and artificial intelligence was merely science fiction. Their solutions were shaped by the possibilities of their time.

Today’s global public domain is more than a theoretical concept. It is something citizens can increasingly see and measure in real time with smart sensors, big data, and AI, while technologies like blockchain allow people to establish trust in all this data without creating large third-party organizations. While such technologies are already playing a pivotal role in commercial settings, their massive potential for solving global challenges is yet to be realized.

Global problems have proliferated, but the spectrum of solutions has vastly expanded, too. The world is facing overwhelming transnational challenges, and hence there is no choice but to find effective transnational solutions. Public-private partnerships that are enabled by platforms and protocols can bend the disruptive power of technological innovations toward positive ends.

Sebastian Buckup is the head of programming and a member of the World Economic Forum executive committee.

Dominic Waughray is the head of the Centre for Global Public Goods and a managing director at the World Economic Forum.

The aid community often ignores the wishes of the very people it’s supposed to be helping. The world needs a more bottom-up approach to development.

U.S. Officials to Hold High-Level Talks With Taiwan as Tensions With China Worsen