For some nations, trade and cooperation are becoming less attractive. But the world needs more coordination, not less.

With the international economic order apparently crumbling, it may seem increasingly sensible for individual countries to adopt protectionist policies. But the effects of climate change, the erosion of national corporate tax bases, and the splintering of global supply chains mean that the world really needs more economic cooperation—not less. The question then, is how.

There are three areas ripe for coordination. First, governments could strengthen their collaboration on international taxation. For example, they could agree to tax consumption rather than production, which would allow citizens to benefit from taxes emanating from economic activity in their country, instead of the current system, which allows companies to pay minimal taxes only where they manufacture goods—an increasingly unsatisfactory method in a digital world. Second, companies could strengthen their efforts to create a circular, or “regenerative,” economy that better recycles the resources it uses. And third, the United Nations, International Labor Organization (ILO), and their partners could create a supply chain human rights charter to guarantee the basic rights of workers around the world.

For almost 75 years, a nation’s optimal strategy in the global economy was to collaborate, and it seemed likely that economic forces would surpass domestic political ones. The Cold War, in this framework, was an economic war, won on the well-stocked supermarket shelves of West Berlin. Wherever goods, jobs, and aspirations went, politics followed. Economic cooperation eclipsed geopolitical competition, and for a long time, it seemed as if the system would forever lead to greater integration.

But politics no longer lag behind global economic forces. As workers in the West saw their wages drop and their jobs disappear, many turned their backs on collaborative trade and clamored for change. The United Kingdom’s vote to leave the European Union was perhaps the greatest setback for economic integration in the bloc’s six-and-a-half-decade history. And the United States, meanwhile, pulled out of the Trans-Pacific Partnership, started a trade war with China, levied tariffs on European goods, and blocked World Trade Organization arbitration.

If trade and cooperation are becoming less attractive, and leading countries are moving toward autarky, should others follow suit?

As the West’s appetite for integration changed, other countries had to question their own strategies. The trend is clear in the statistics: From 1945 until 2008, trade grew faster than GDP almost without exception, with exports as a percentage of GDP reaching a record high of 26 percent in 2008. But that figure has been on a downward curve ever since, meaning trade is losing in relative importance.

The trend raises a question: If trade and cooperation are becoming less attractive, and leading countries are moving toward autarky, should others follow suit? No. There are some even bigger, countervailing trends on the horizon. And they will increase the incentive for globalization and more cooperation.

First, climate change will continue to accelerate. To avoid its worst effects, everyone is better off working together. Second, digital trade is exploding, increasing the need for a new international tax paradigm that can cover digital services—something that existing frameworks leave out. And third, global supply chains may be changing, but they are not disappearing. If the world wants to guarantee a fair economic system for workers, protecting the rights of those working in global supply chains could go a long way. 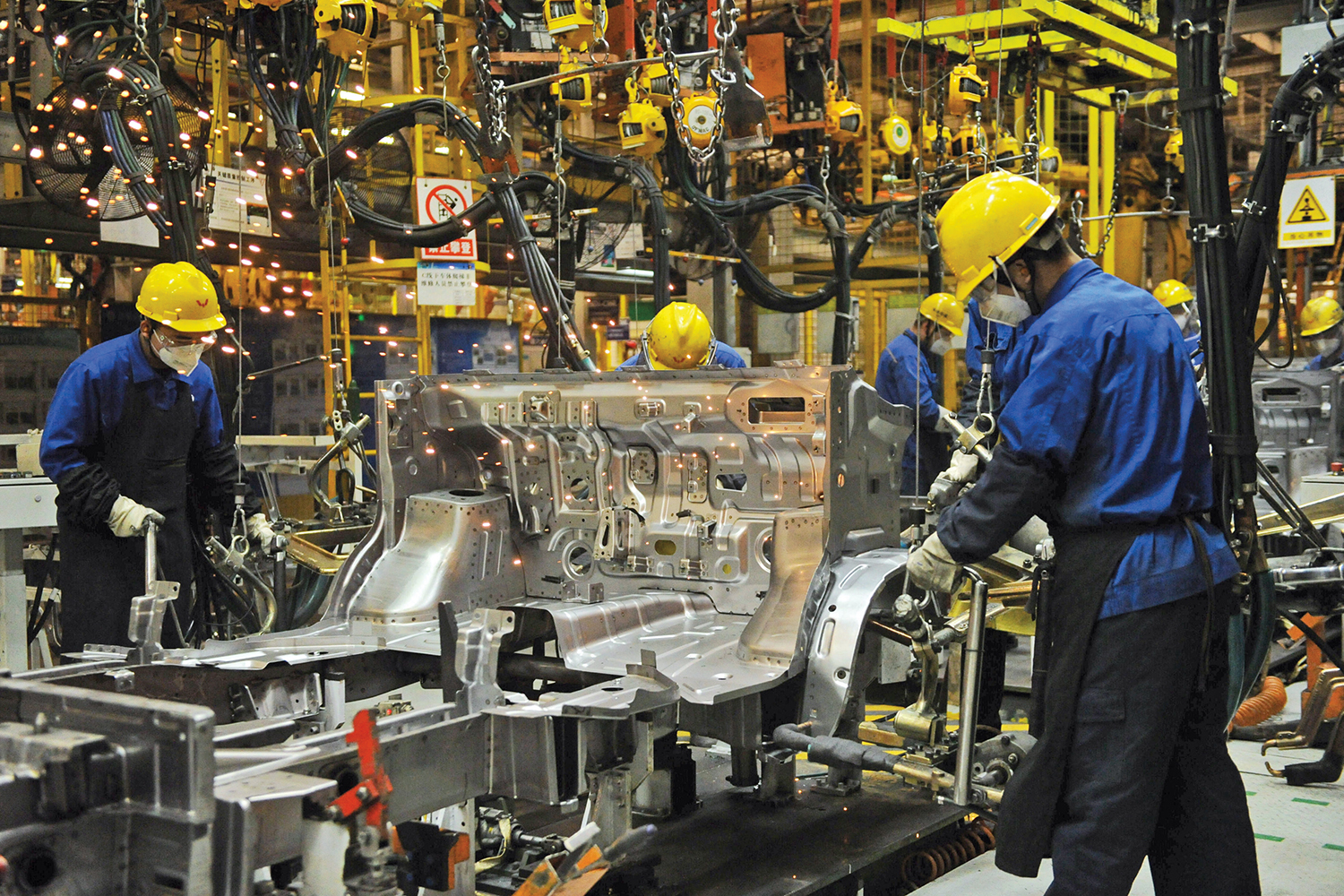 Workers weld parts on an auto assembly line at a factory in Qingdao, China, on April 29, 2019. YU FANGPING/Barcroft Media via Getty Images

First, take the issue of climate change. To halt its progress and restore nature’s ability to provide humanity with resources, we need an overhaul of the entire economic system. Both production and consumption must become more sustainable, and the way to do that is to make them circular and regenerative. “Circular” means closing the loop between production and consumption, that is, reusing the waste of one economic cycle as input for the next. “Regenerative” means ensuring that the natural capital the global economy relies on—the Earth and its atmosphere—isn’t depleted but rather can restore itself.

National governments cannot make this happen by themselves. Much of what the average Westerner consumes travels halfway around the world before it arrives in stores. And in free market economies, consumers continue to have the last word, even when governments offer carrots and sticks to guide them toward greener choices. A better solution would be for those companies that are the heaviest users of natural resources and the largest producers of global emissions to enforce circular and regenerative best practices across their entire supply chains.

One example is the Loop initiative by the U.S.-based recycling company TerraCycle. The company works with major multinationals to promote responsible consumption and eliminate waste. It allows any consumer to obtain refillable steel containers for their favorite products. It works much as how milk sellers used to go door to door to pick up and refill customers’ glass bottles. The approach would eliminate single-use plastic, still prevalent in so many consumer goods, and help make the consumption economy more circular.

Second, there’s taxation. Currently, the international tax system creates competition among countries to attract and retain companies’ legal global headquarters. But in a world where the production of goods and services is increasingly digital, having a headquarters is becoming less relevant. In some cases, only a few dozen executives are located in the actual headquarters, with all back offices, production, and sales based elsewhere.

The result is a tax race to the bottom, with ever-decreasing revenue for most countries. A better outcome is possible. If governments agreed to change the tax paradigm so that it focuses on consumption, almost all countries could gain. Especially for digital services, such a system could lead to a major boost in tax revenues, since those aren’t currently taxed consistently, without taking away incentives for companies to operate globally. New treaties could ensure that one country doesn’t tax consumption while the other imposes a levy on production.

An example comes from France. In the summer of 2019, France introduced a digital services tax on the advertising revenues of companies generating at least 750 million euros ($827 million) in digital services worldwide, of which a minimum of 25 million euros ($28 million) were earned in France. So far, coordination efforts on the European level have failed, but the Organization for Economic Cooperation and Development is building a potential worldwide framework that could lead to net gains for all involved.

The economic system already has the answers it needs.

Finally, there are supply chains. Despite a decrease in relative importance, global trade continues to play a very significant role in almost every economy. The benefits that come from importing goods—namely access to more affordable products—could outweigh the costs in terms of job losses. But to make the system work better for all, and to create a level playing field, the world needs to make more of an effort to secure the rights of those working in supply chains around the world.

In a previous era, workers in Western economies united and used their power to push through social and labor reforms. Today, that same struggle continues in many emerging markets, where workers lag far behind on rights and pay. At the same time, some of the progress that workers in Western economies made has been lost as jobs disappeared overseas and as their collective bargaining power decreased.

The economic system already has the answers it needs. Organizations like the ILO (after World War I) and the United Nations (after World War II) long ago established codes for humane working conditions, namely the ILO core labor standards and the U.N. Universal Declaration of Human Rights. If countries engaged in the world’s deadliest wars could agree to these commitments, why couldn’t countries living in relative peace work together to fully realize them?

Collaborating on these three priority areas—taxation, climate change, and workers’ rights—would go a long way in improving the lives of everyone across the world. Working together would rescue us from the negative Nash equilibrium that the world is now heading toward, in which each party has incentives not to collaborate, and set us on a course for a much more positive outcome. Cooperation could again become the norm.

It won’t be easy. But if a few important stakeholders again show the way, they may well inspire others to follow suit. The payoff would be significant: the achievement, for the first time in history, of an inclusive and sustainable equilibrium in the global economic system. 

Klaus Schwab is the founder and executive chairman of the World Economic Forum.

With the new China deal, Trump may see 2020 as the year he’ll win the United States’ trade wars. Instead, they’ll likely spin further out of his control.

The Year Ahead |
Chris Miller

The Year of the Trade Truce

The Year Ahead |
Salvatore Babones

The Global Economy 2020: A Positive Outlook Shadowed by China, Debt, and Trade Tensions

Experts expect growth to rebound, but many of their projections are built on shaky foundations.

The Year Ahead |
Keith Johnson
Latest