In Turkey, a Battle Over Infrastructure Could Shape the Next Presidential Race

ISTANBUL—The debate over the Istanbul Canal infrastructure project has the potential to turn into an existential one between Turkish President Recep Tayyip Erdogan and Istanbul Mayor Ekrem Imamoglu. In politics, emotional arguments hold sway just as much as rational ones. For now, Imamoglu has all the emotional ones. His motto against the project reads: “Either the canal or Istanbul.” If Erdogan loses this debate, it could be very costly for him.

In 2011, Erdogan announced his seemingly crazy project to dig a canal to connect the Black Sea to the Sea of Marmara in a second location. The Bosphorus strait, which divides the European and Asian sides of Istanbul, already connects the two seas, and the passage of ships through the strait is regulated by the Montreux Convention.

A new canal to the west of the city is expected to reduce traffic through the Bosphorus and mitigate the risks that arise from such traffic. Turkish Transport Minister Mehmet Cahit Turhan claimed that initial revenue from ships passing through the canal would be $1 billion per year. This number is hard to justify particularly because the reason why vessels would prefer the canal over the Bosphorus remains unknown. The government claims that the canal will reduce waiting times and thus freight companies will prefer paying the premium. 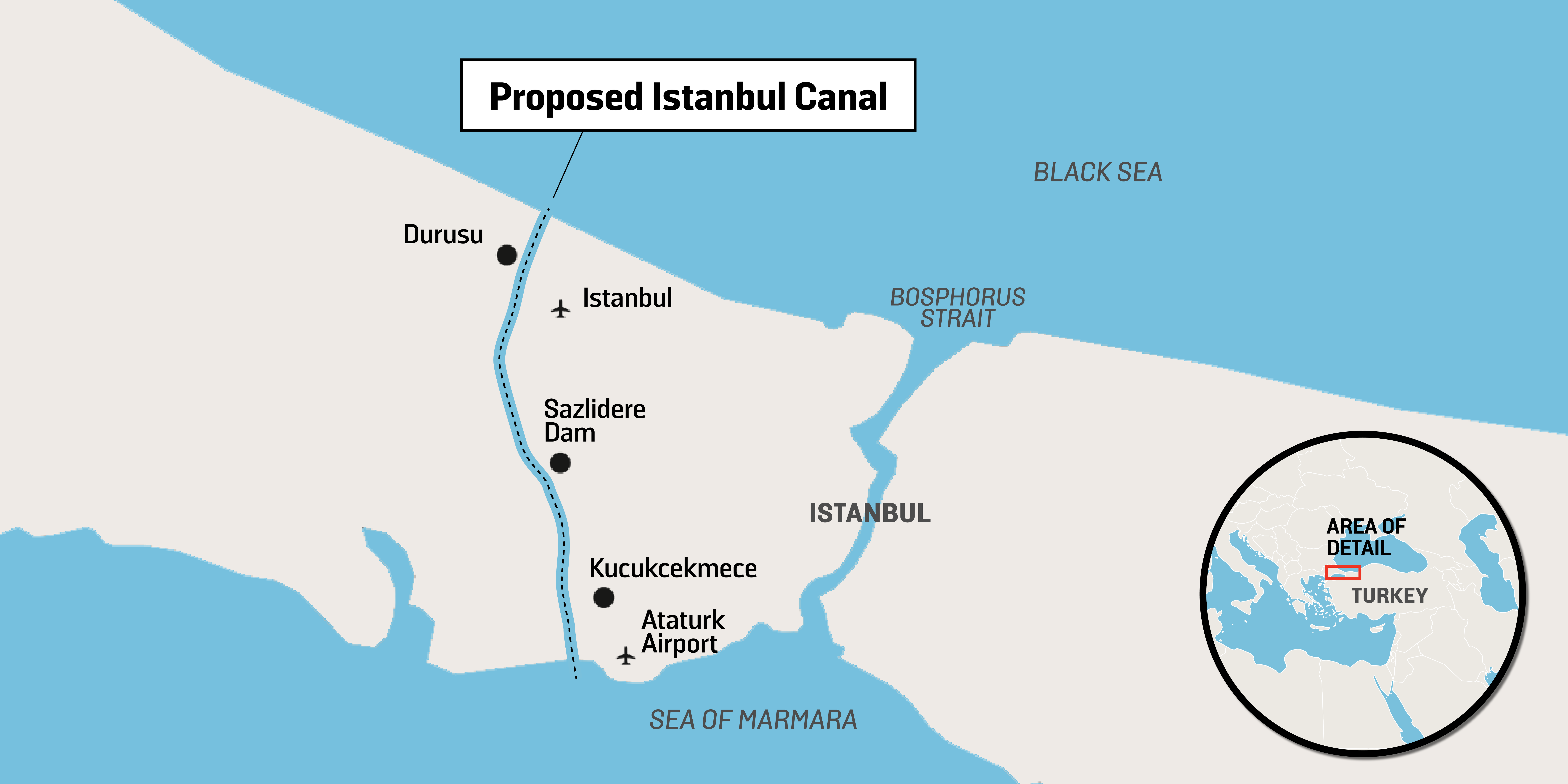 Erdogan has a fascination with megaprojects. He built a third bridge over the Bosphorus, the third and largest airport in Istanbul, and many other large-scale infrastructure projects. These helped him win elections in the past, but now he is advocating what could become a white elephant at the worst of times. In a shaky economy with a 14 percent unemployment rate, increasing taxes, and no fiscal room for maneuver, Erdogan will have to convince an increasingly environmentally aware Turkish public that resources should indeed be allocated to this project now.

Massive infrastructure projects have helped Erdogan win elections in the past, but now he is advocating what could become a white elephant at the worst of times.

The environmental impact assessment for the canal, on the other hand, suggests that 200,878 trees alone will be affected by the project. In the expected seven-year process of realizing the project, an average of 360 explosions a year will take place, and approximately 4,000 tons of ammonium nitrate fuel oil will be used, according to geological experts. This is a hard sell. And this time, he has a formidable opponent; Imamoglu is putting up a tough fight against the project.

The debate over the canal project reignited when Turhan declared on Nov. 28 that awarding contracts for the construction of the canal would begin soon. The project, which is envisaged to be completed in less than a decade, includes settlements along the canal banks, which would create a new city of around 500,000 people. (The opposition claims 2 million people would move in.) Replaced soil is planned to be used in creating artificial islands. The budget is estimated at $15 billion, according to Turhan.

Imamoglu Won the Vote, but Can He Save Istanbul?

The new mayor will preside over a city that people are fleeing in droves.

The Istanbul Rerun Isn’t About the Mayor. It’s About Turkey’s Future.

Erdogan’s Purges Have Replaced One Islamic Sect With Another

Turkey expelled alleged sympathizers of Fethullah Gulen from government jobs after the 2016 coup attempt. Other Islamic sects, and one in particular—the Menzil—are now filling the vacuum.

A project of this magnitude will have long-lasting and irreversible consequences on the environment and the economy—not to mention repercussions from a military standpoint. After all, once the canal is dug, the old city of Istanbul will effectively become an island, which, Imamoglu recently claimed, would render the city defenseless. In the case of a military threat, troops will have to be deployed to the “island” either through the bridges over the canal or the Bosphorus.

Yet the debate in Turkey is far from a technical one. The most salient argument of the pro-canal camp is the revenue that could be generated as ships pay for passage. It is not clear yet why ships would pay to use the canal when there is free passage available 25 miles to the east, through the Bosphorus. The assumptions are feeble, and calculations are vague. In a nationwide survey conducted in December 2019 by Istanbul Economy Research, a polling firm, 49 percent of the public did not agree with the statement that the project will generate new sources of revenue.

The government is aiming to gather support strictly along political lines; amid partisan bickering over the project, Imamoglu has chosen to rely mostly on technical and environmental counterarguments instead. The mayor’s concerns include the loss of agricultural fields, possible negative outcomes in the case of the long-expected Istanbul earthquake, and destruction of the city’s flora. He will need to provide more detailed evidence in the future, but for now his arguments seem to be sticking. Thousands of Istanbulites rushed to the Istanbul Provincial Environment and Urbanization Directorate to file appeals against the project’s environmental impact assessment.

In addition, the public in general is not informed. The same poll from Istanbul Economy Research shows that public knowledge regarding the project is staggeringly low. About 49 percent of the participants indicated that they had no information on the project, whereas 40 percent said they were “somewhat informed” about the project. Only 11 percent claimed that they were “well informed.” With 12.5 percent of locals claiming to be well informed, Istanbul residents are only slightly more aware of the key issues.

Erdogan has described the project as his dream and has once again based his strategy on ideological polarization. His coalition partner, Devlet Bahceli, the head of the Nationalist Movement Party, followed suit and described the “irrational” opponents of the project as unpatriotic. Paradoxically, both leaders were against the project at different points in history. Former Prime Minister Bulent Ecevit had introduced the idea in 1994, when he was a member of Parliament, and Erdogan was a staunch opponent at the time, when he was a mayoral candidate in Istanbul. Likewise, Bahceli had described the canal as a “crazy project that will enable theft” back in 2011 when it was first introduced by Erdogan and Bahceli was still in the opposition ranks.

It is part of a wider trend. The Turkish public is becoming increasingly sensitive to environmental issues. In the past decade, countless protests have taken place across Anatolia, particularly in opposition to hydroelectric power plant construction. Most recently, thousands of people gathered in the province of Canakkale to protest gold mining projects that would harm the environment. The common thread of these protests is that they include people from all political denominations.

Imamoglu has seized the opportunity to position himself against Erdogan in a debate of national significance in order to strengthen his bid in the next presidential elections. He is pressuring the president on both the economic and environmental repercussions of the project. Both resonate with the public. On the economic front, it is not clear how the project will be financed. If it is indeed through public funds, voters will ask if this is the right allocation of resources when the budget deficit increased by 70 percent in 2019 to reach $21 billion and the recent raise to the minimum wage was a measly 15 percent, leaving those who earn it well below the poverty line.

So far, the government is standing firm. Erdogan announced that “the canal will be built whether they like it or not.” But it is far from certain that his usual rhetoric will suffice to win over the crowd this time, particularly when the debate concerns issues of genuine importance to voters.

After the repeat Istanbul municipal elections, which Erdogan’s party lost twice, Imamoglu is gearing up for a second win against Erdogan—this time on the national scene. If Imamoglu can manage to win the crowd in the debate over the canal project, it could deal a deadly blow to Erdogan in the run-up to 2023 presidential elections.

Can Selcuki is the managing director of Istanbul Economics Research, a polling company, and a board member of EDAM, an Istanbul-based think tank.

Imamoglu Won the Vote, but Can He Save Istanbul?

The new mayor will preside over a city that people are fleeing in droves.

The Istanbul Rerun Isn’t About the Mayor. It’s About Turkey’s Future.

Erdogan’s Purges Have Replaced One Islamic Sect With Another

Turkey expelled alleged sympathizers of Fethullah Gulen from government jobs after the 2016 coup attempt. Other Islamic sects, and one in particular—the Menzil—are now filling the vacuum.

Venezuela’s Maduro Should Be Tried for Ecocide