Speaking to an audience of trainee spies in John Le Carré’s The Secret Pilgrim, the inscrutable Cold Warrior George Smiley—Le Carré’s most iconic character—instructs them to place a quest for understanding at the center of their work. “I only ever cared about the man,” Smiley says. “I never gave a fig for the ideologies, unless they were mad or evil, I never saw institutions as being worthy of their parts, or policies as much other than excuses for not feeling.”

Le Carré’s books lend heroic proportions to the dull-sounding injunctions of European liberals to defend democratic principles. After the Cold War ended, and with it his morally ambiguous chronicles of the men charged with a good-and-evil struggle against the other side, the British author’s own vision of good and evil—especially evil—became unambiguous. His books turned to characters grappling with unaccountable corporate power, banks laundering money for international criminals, fearsome terrorists, and privatized security services. In his novelistic universe, individuals confront private power, terrorism, and American imperialism, sometimes making the ultimate sacrifice in the process. 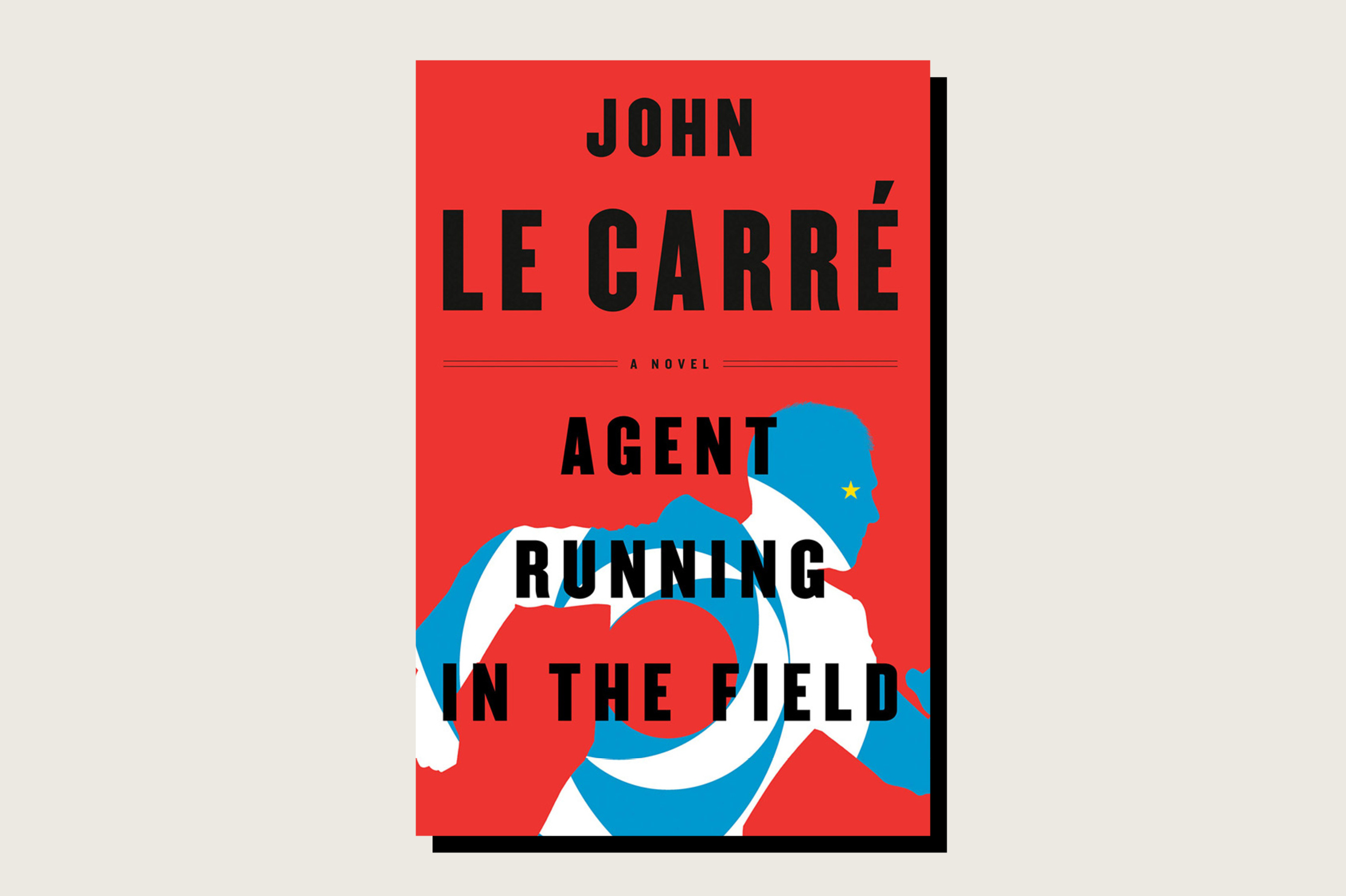 So clear are the villains and moral questions in some of Le Carré’s later novels that some critics, like the Guardian’s Steven Poole in a 2003 review of Absolute Friends, accuse the now 88-year-old of becoming a strident editorialist in old age.

Le Carré does not appear to have taken this criticism too seriously. His latest novel, Agent Running in the Field, contends with the question of loyalty: How does one’s integrity remain intact as the establishment to which one has committed one’s life ceases to work in the public interest?

Le Carré remains one of the most interesting political novelists of his time, asking readers how much they’re willing to risk in order to protect European democracy—with its pledges to uphold the rule of law and human rights—from becoming nothing more than a historical anomaly. His novels take place in large part within the minds of his characters, prompting the reader to consider an adjacent question: How much is your conscience worth to you?

Espionage is a fitting form for that task. In theory, intelligence agents break laws—and social norms—in order to protect them. They lie, cheat, and steal in order to preserve truth, honesty, and individual rights. Astute intelligence agents learn how the world works, starting within the minds of their enemies. They determine where people fit into bureaucracies, the truths that animate the intricate webs of human societies, and how these truths govern critical events. Armed with this knowledge, they must make choices profoundly unsettling to their loyalties and moral sensibilities. In the 1979 novel Smiley’s People, for example, Smiley persuades his KGB nemesis to defect by threatening to expose his use of ill-gotten funds to pay for his daughter’s care in a Swiss psychiatric facility. Smiley finds no solace in this victory. “He did not want these spoils, won by these methods,” Le Carré writes.

In Le Carré’s post-Cold War novels, these costs tend to be more direct than the damage to conscience Smiley and others suffer. Most of Le Carré’s do-gooder characters don’t meet happy endings. In 2001’s The Constant Gardener, a diplomat-turned-big pharma muckraker seeking to uncover the perpetrators of his wife’s murder and the sinister actors responsible for fraudulent drug tests in the developing world is rewarded with a shallow grave. An interpreter attempts to stop a coup meant to help wealthy Westerners get their hands on Eastern Congo’s coltan reserves and is imprisoned and stripped of his U.K. citizenship in 2006’s The Mission Song.

Agent Running in the Field bridges Le Carré’s old and new heroes. It follows Nat, a veteran MI6 agent runner, returning to a Brexit-rattled Britain after a career cultivating Russian assets on the European continent. Though he is no longer behind enemy lines, Nat has not exactly returned home.

He does his best to keep his political sensibilities tucked away, but Nat finds himself at odds with the ideas reshaping his country. Born in Paris to a Scots Guards officer and a mother of White Russian stock, Nat grows up between a boarding school education in the Scottish Highlands and a polyglot household in a Parisian suburb. Though Nat is outwardly conservative, his globetrotting career and marriage to a human rights lawyer named Prue prove burdens in the twilight of his career.

Newly returned to London, Nat is reassigned to the Haven, an espionage backwater, where his superior will be a former financier with few spy qualifications. Nat’s situation, that of the worldly expert subordinated to the bumbling authority of an entitled putz, is a blistering satirical, if unsubtle, take on the United Kingdom’s ongoing self-immolation.

Revealing the nature of his profession to his leftist adolescent daughter for the first time, the ordinarily quiet Nat can’t help but reveal his fury toward Britain’s ruling class. Electrified by the possibility of strengthening his connection with his daughter—who doesn’t quite respect him—Nat lets his guard down, decrying “a minority Tory cabinet of tenth-raters” and the “sheer bloody lunacy of Brexit.”

She easily gets the better of Nat: “So if I’ve got this right … for the sake of a country that you have serious reservations about, even very serious, you persuade other nationals to betray their own countries,” she says.

Without a satisfying rejoinder, Nat spends much of the rest of the book keeping his moral reservations close to his chest, lest they force him to act on the dangerous truths he and many of his fellow citizens are all too aware of: that in a fragmenting society governed by self-dealing fools hellbent on shepherding every last democratic institution into an abyss of corruption and demagoguery, moral clarity depends only on the self.

Nat’s bewilderment in the face of a U.K. governed by Brexiteers is familiar to readers with liberal sensibilities.

Nat’s bewilderment in the face of a U.K. governed by Brexiteers is familiar to readers with liberal sensibilities, as is his general passivity in the face of a world changing so quickly. Like so many of his contemporaries, Nat is called upon to act in a manner that accommodates the designs of those unmaking the institutions once believed to be the substance of their country.

Nat’s weekly badminton partner threatens to upend his attempts at keeping his offended sense of personal ethics to himself. A twenty-something researcher for a nondescript media company, Ed is a largely friendless Germanophile who spends much of his postgame drinking sessions with Nat raging impotently at the Tories, U.S. President Donald Trump, Euroskeptics, and anyone else he sees as a threat to European unity and democratic principles.

In the face of Ed’s anger, Nat does his best to preserve a “decent silence” about his own views, gently reminding his companion that Britain’s institutions, like the U.S. Constitution, will survive the incompetents and ideologues who seek to undermine them.

But Nat and his colleagues at MI6 learn that Ed has his own share of secrets. An intelligence officer himself—though at a junior level—he’s uncovered a covert plot by the United States and a pre-Brexit U.K. to bribe and blackmail European politicians and other powerful figures to dismantle the EU’s trading tariffs.

Ed bungles his attempt to reveal the conspiracy to a European ally capable of doing something about it and makes himself the unwitting puppet of Russian intelligence agents. As his only close confidant, Nat is hauled in for interrogation, his sympathies scrutinized for signs of treason. In the eyes of his colleagues, he becomes a liability at best and a potential traitor at worst.

To prove himself one last time, Nat is charged with recruiting Ed as a double agent, turning him into another instrument of government power, far from courts, cameras, and any notion of due process. Instead, with his wife’s help, he sets a plan in motion that may save Ed and his own conscience.

Le Carré is famous for literally shaping the vocabulary of tradecraft: Terms he invented or popularized, including “mole,” were rapidly adopted by actual spies. But his great contribution is not the details of dead drops and Moscow rules but his protagonists’ attempts to make sense of their bit parts in the backrooms of history: to explore the moral dilemmas facing those who wish to live morally in open societies threatened both externally and from within.

Le Carré’s great contribution is not the details of dead drops and Moscow rules but his protagonists’ attempts to make sense of their bit parts in the backrooms of history.

How Nat or any individual reacts in the face of such forces, Le Carré suggests, has less to do with their circumstances and more to do with how deeply ingrained their moral strengths and weaknesses are. One of Nat’s supervisors refers to one’s “other head,” the place where secret plots and betrayals take shape. It’s the closest thing one might find to a soul in Le Carré’s work, a place in one’s mind where cunning and conviction unite behind actions that seem inevitable in retrospect.

This, in Le Carré’s eyes, is what unites the traitor and the liberal patriot: the choices that will define them lie dormant like sleeper agents, waiting for activation. “The seeds of sedition,” he writes, “… are sown a great deal earlier than the outward act that results from them.”

Martin de Bourmont is a journalist based in Washington. Twitter: @MBourmont

The Spies Who Came In From the Continent

How Brexit could spell the end of Britain’s famed advantage in intelligence.

The West Is Open for Dirty Business

The European Union and United States need a joint front against poisonous kleptocracy.

How to Take Care of an Ex-Spy

Former intelligence officers need compassion —or they can turn sour.

The ICC’s Israel Investigation Could Backfire

Sanctioning India Would Spoil the Quad

The Most Vital 100 Days Since FDR