The region’s leaders are expected to discuss the potential peace deal in Afghanistan and the economy.

As world leaders gather at the annual World Economic Forum (WEF) meeting in Davos, Switzerland, this week, much of their talk is about what the organization’s founder Klaus Schwab calls “stakeholder capitalism.” As Schwab argues in the Winter 2020 issue of Foreign Policy, today’s world needs more rather than less economic cooperation. Collaborating on taxation, climate change, and workers’ rights could “go a long way in improving the lives of everyone across the world,” he writes.

Who is representing South Asia? Pakistani Prime Minister Imran Khan, who attended Davos frequently before he came to power in 2018, is among the region’s most prominent delegates this year. Khan is scheduled to meet U.S. President Donald Trump and is expected to tout his country’s economic improvements and to raise concerns about the security situation in Indian-administered Kashmir. Afghanistan’s President Ashraf Ghani will also generate interest as he courts international support for a potential peace agreement.

India’s Davos delegation is led by Commerce Minister Piyush Goyal, who is scheduled to hold several bilateral meetings with ministers and CEOs. Notably absent from Goyal’s schedule are the delegates from Malaysia, because “a mutually agreeable time has not been reached.” India restricted imports of Malaysian palm oil after Prime Minister Mahathir Mohamad criticized India’s new citizenship law and actions in Kashmir.

A drag on the world economy? Business leaders at Davos may have taken note of comments by the International Monetary Fund chief economist Gita Gopinath, who told India Today on Monday that the IMF has revised downward its global growth forecasts for 2020, and that “the vast majority of it comes from our downgrade for India.” But, Gopinath added, “We see India recovering. There is significant recovery coming in the next fiscal year.”

Despite projected growth, a set of indicators released this week by the WEF highlight how South Asia still has a long way to go in reducing inequality. The WEF’s Global Social Mobility Index ranks countries based on the likelihood of families improving their economic outcomes, health care, education, and access to technology. While Denmark, Norway, and Finland take the top spots, Sri Lanka is the highest-ranked South Asian country, at 59th.

An accompanying report says that if countries increased their social mobility index score by 10 points, it would “result in an additional GDP growth of 4.41 percent by 2030,” plus other social benefits. 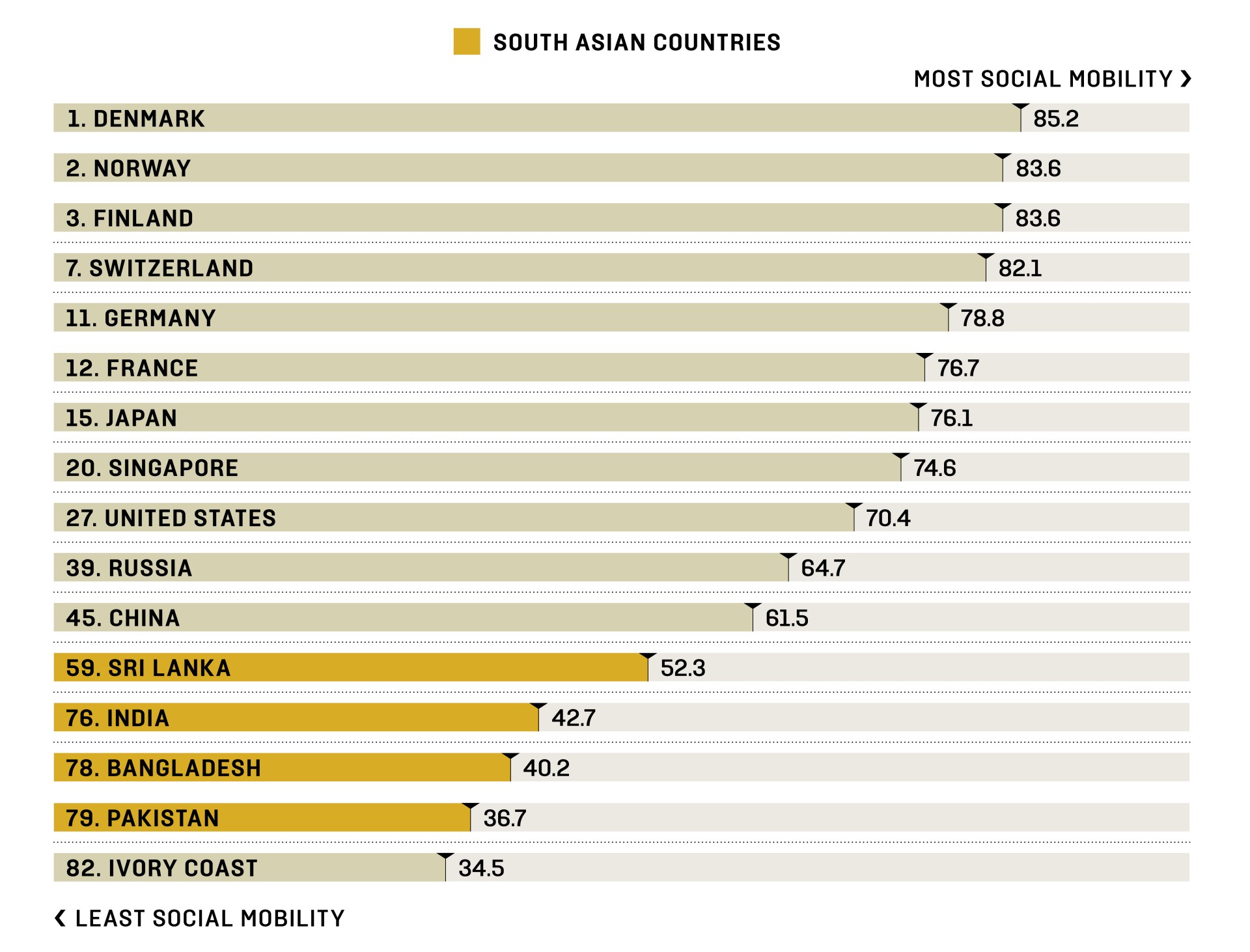 Bangladesh says island is ready for refugees. Last year, Bangladesh announced plans to move thousands of Myanmar’s Rohingya refugees from camps in Cox’s Bazar to an island in the Bay of Bengal, Bhasan Char. Now the government says that the island, which floods regularly during monsoon season, is ready to welcome around 100,000 people—with newly built houses, hospitals, mosques, and flood protection. (Foreign media have not been allowed to visit the island.)

Meanwhile, violence and child trafficking are on the rise in Cox’s Bazar, where as many as 900,000 refugees reside. Bangladesh fears a new flood of arrivals—this time from India—in the wake of India’s new Citizenship Amendment Act, which excludes Muslim refugees from those allowed a fast track to citizenship. Several Bangladeshi officials have canceled meetings with their Indian counterparts amid strained relations.

The Maldives seeks climate change funds. Maldives Foreign Minister Abdulla Shahid has launched a new campaign for foreign funding to fight the effects of climate change in the island nation. “For small states, it is not easy,” Shahid told Reuters. “By the time the financing is obtained, we may be underwater.” The Maldives spends about $10 million a year on coastal protection, but according to estimates from its environment ministry, it will need up to $8.8 billion more.

Afghan deal or no deal? The United States and the Taliban may actually be close to a peace agreement. Last week, the Taliban offered to temporarily reduce violence, which observers believe is an important gesture on the way to restarting peace talks and finalizing a preliminary agreement. A Taliban spokesman even tweeted on Friday that the two sides had “discussed the signing of the agreement and the ceremony for it,” although it was unclear which agreement he was referring to.

On Jan. 26, India celebrates its 71st Republic Day, which honors the day when a new constitution came into effect after independence. Republic Day celebrations include a major military parade, showcasing the country’s service members and latest armaments.

New Delhi also likes to make sure that there are prominent foreign figures at the parade, with past guests including U.S. President Barack Obama, Japanese Prime Minister Shinzo Abe, and Russian President Vladimir Putin. This year, Jair Bolsonaro will become the third Brazilian head of state to attend. Which countries are tied for sending the most chief guests to India’s Republic Day celebrations?

Uber retreats. Uber is selling its food delivery service in India to Zomato, a local start-up backed by Chinese conglomerate Alibaba, among others. While the $172 million deal shuts down the loss-making Uber Eats division in India, it allows Uber to gain a 9.99 percent stake in a rising unicorn last valued at $3.55 billion. Zomato’s primary domestic rival, Swiggy, is supported by another Chinese tech company, Tencent.

India’s tax hedge. As India’s economy slows down, one of the government’s methods for reviving GDP growth has been tax cuts: rationalizing the goods and services tax rates and lowering corporate rates. Some are now calling for a reduction on personal taxes. Individual tax compliance in India is terrible—as low as 11.6 percent, according to recent data.

If the country needs some ideas for enforcing its codes, it may look to its own imperial history. In the late 1800s, the British government in India built a massive hedge—more than 1,100 miles long, and12 feet tall and 14 feet across in parts. It was designed to prevent the smuggling of salt to areas where the salt tax was high. Eventually abandoned in 1879, the hedge was only partially successful and required constant maintenance, including 100,000 tons of additional plant matter each year.

Sting operation. A Chinese man was caught trying to smuggle 200 poisonous scorpions out of Sri Lanka last week. He allowed to return home after being fined around $550. Sri Lanka struggles to keep the trafficking of exotic animals under control. It submits the most proposals for additional protections under the Convention on International Trade in Endangered Species of Wild Fauna and Flora, and it regularly stops attempts to sell elephants, rare bird nests, and pangolins.

B) The United Kingdom and France.

Representatives from these countries have been the guest of honor five times. Leaders from the Soviet Union/Russia have done so four times, as have leaders from Bhutan. An American has only been the chief guest once, in 2015.

NEW FOR SUBSCRIBERS: Want to read more on this topic or region? Click + to receive email alerts when new stories are published on Economics, India, South Asia, Afghanistan