Malnutrition is passed from one generation to the next between mother and child—unless someone commits to stopping the deadly cycle.

When 14-year-old Wounaba first found out that she was pregnant, she was excited—until the fear kicked in. For as long as she could remember, her family of 12 had struggled to find enough food.

She asked for help. UNICEF had been visiting her village—a dusty community 16 hours’ drive east of Guinea’s capital, Conakry—for more than five years. In cyan blue T-shirts, its local volunteers led her to a medical clinic and assessed her height and weight. When her son was born later that year, doctors placed him on the scales as well, and as he grew they continued to check in: wrapping both mother and child in a measuring tape and handing over sachets of macronutrient-enriched peanut paste as the child’s weight began to drop.

In the meantime, Wounaba learned she was pregnant again. As with millions of teenage girls around the world, her role in ending malnutrition within her community hadn’t just been underestimated: It had gone entirely overlooked.

The global conversation around malnutrition is unifying and emotive: Pictures of children with protruding stomachs and razor-sharp ribs tug on the most hardened policymaker’s heartstrings and bring funders together. But experts also say the strategies in play are well worn and resistant to change, despite a clear need for innovation. One of the 17 Sustainable Development Goals set out by the United Nations is to attain “Zero Hunger” by 2030, but only 40 countries worldwide are on track to eliminate chronic child malnutrition in the next 10 years. Instead, rates of undernourishment are on the rise in South America and Africa, while progress made in Asia has led researchers to fear a swing in the opposite direction: One 2019 study predicts nearly two-thirds of the South and Southeast Asian population will be overweight or obese within 10 years.

Those most at risk from malnutrition are teenage mothers and their children. Multiple studies have shown that because pregnant teenagers are still growing, their nutritional needs are larger—and if they go unmet, it can affect not only their own development but also that of their unborn child.

According to the World Health Organization, babies born to teenage mothers are twice as likely to be stillborn or die within the first month as children with parents over the age of 20. Teenage mothers are 20 percent more likely to experience problems while breastfeeding. In 2019, the International Food Policy Research Institute published a study on 60,000 first-time mothers in India that found children born to teenage mothers were smaller than those with adult parents, and had a lower height-to-weight ratio on average, too. Meanwhile, the 2018 Global Nutrition Report revealed there isn’t a single country in the world that’s on track to reduce rates of anemia in girls of reproductive age. 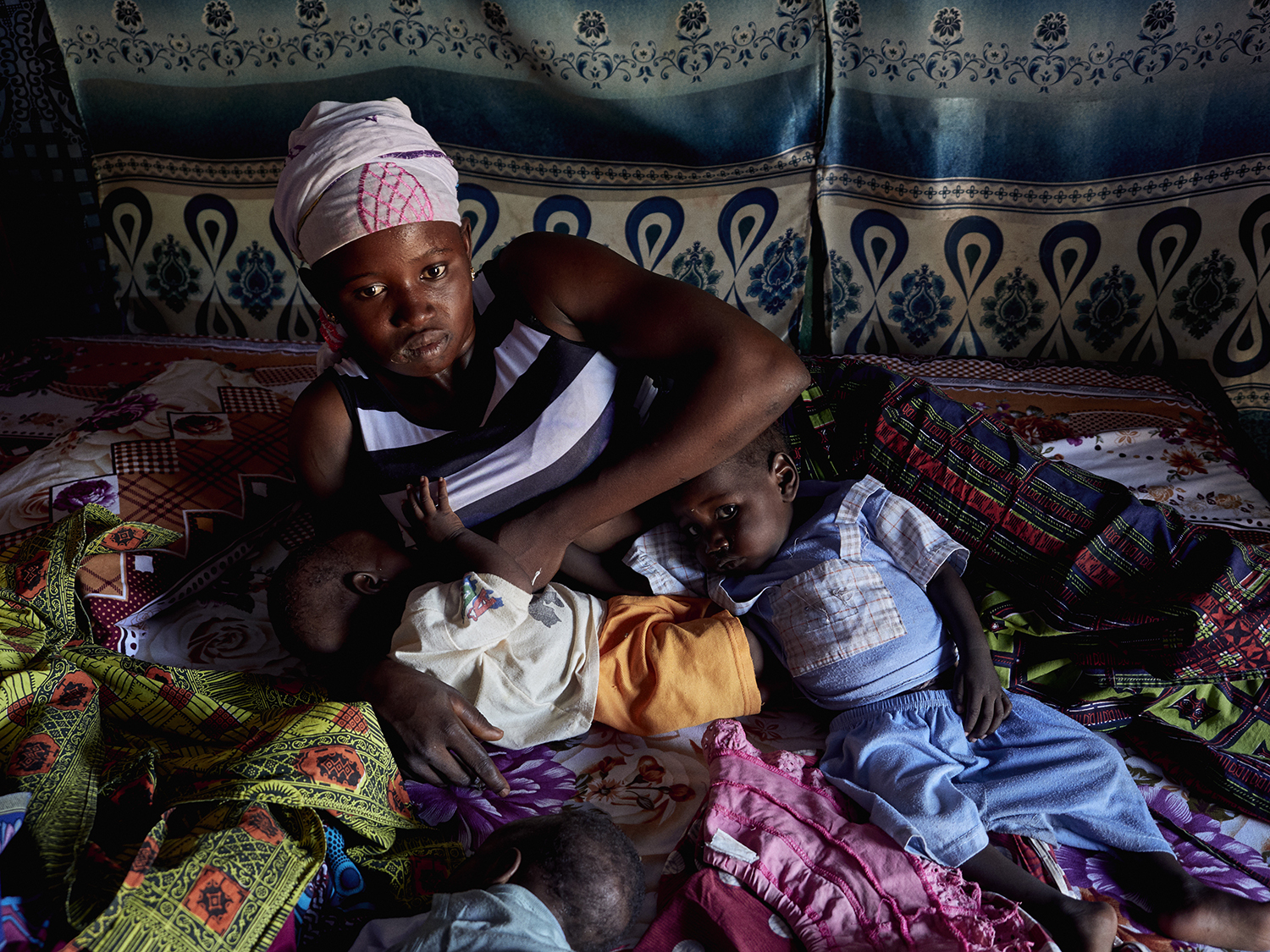 If malnutrition is cyclic—a bleak inheritance of hunger passed down from mother to baby from one generation to the next—then teenage pregnancy is the axle upon which the wheel spins. Yet international aid organizations consistently fail to take the specific needs of adolescent girls like Wounaba into account when working to reduce rates of maternal malnutrition and child undernutrition, and the lack of targeted support for teenage girls is impacting the lives of millions of children around the world.

Last year, the U.S. Agency for International Development invested more than $67 million in supporting adults and children who showed tape-measurable signs of undernourishment and to provide a range of assistance and training for international communities in times of crisis.

In Southeast Asia, a focus was placed on education and nutritional awareness. Locally based nonprofit organizations such as Mith Samlanh, a Cambodian organization that aims to support street children and their families, developed board games for young mothers, using brightly colored cardboard vegetables to teach them about which foods make up a balanced diet, while UNICEF has worked to develop a fish-based food supplement to appeal to local tastes. In West and Central Africa, education targeted at women and girls often takes the form of large-scale gatherings and traditional songs, working with age-old folklore to encourage girls to breastfeed their babies and seek professional help if they can’t. In Peru, the World Food Program has supported the development of an app that enables users to find out how much fruit and vegetables cost at local wholesale markets, in the hope that it will dissuade them from buying fast food instead. 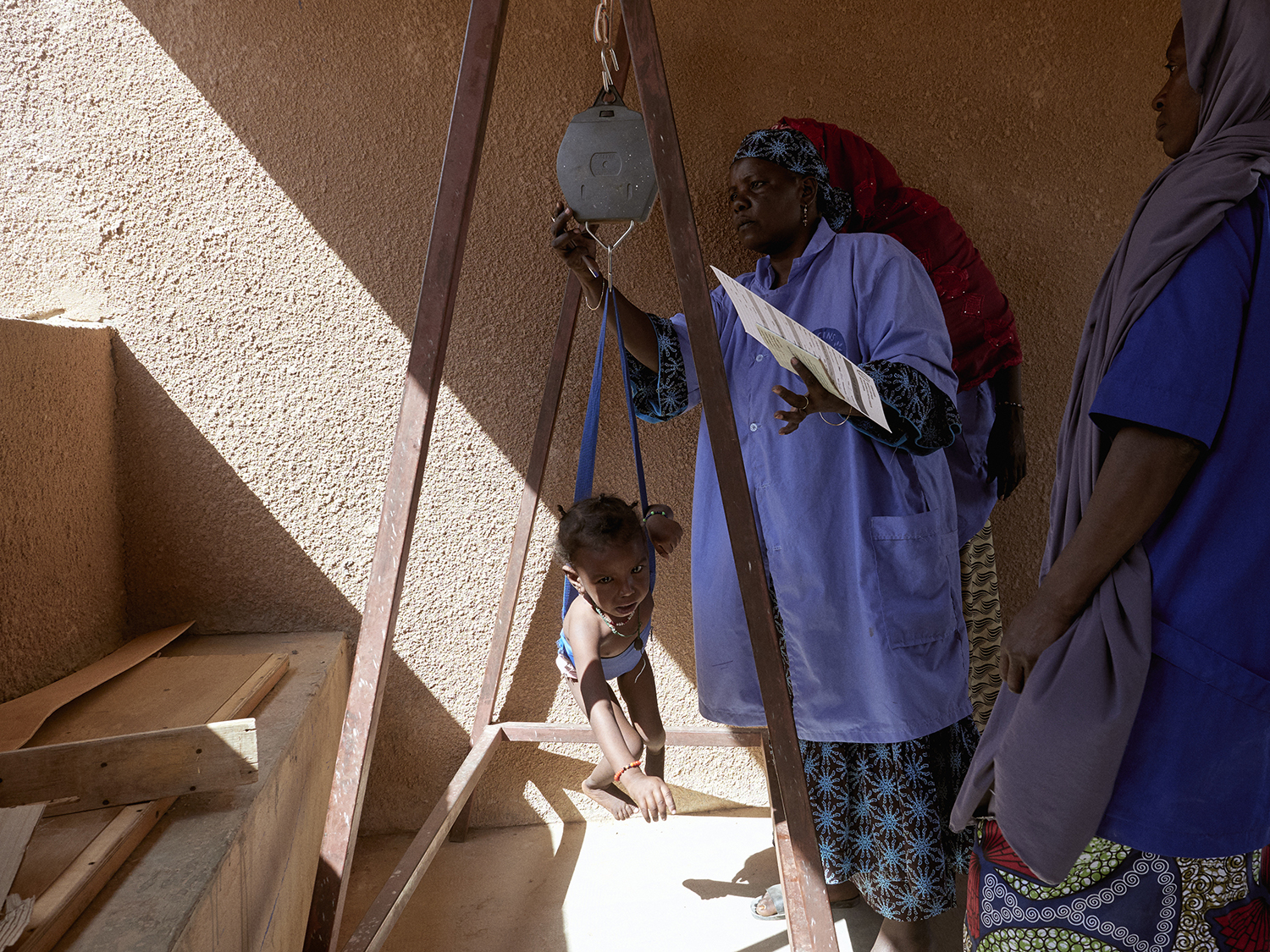 But while these temporary projects may succeed in chipping away at the symptoms, they fail to address its root cause. To end child malnutrition, intervention must go further than laminated pictures of vegetables and the mass distribution of packets of Plumpy’nut peanut paste. Teenage girls need help avoiding underage marriage, staying in school (or going back to school after giving birth), and planning and preventing future pregnancies—none of which are currently included as part of the U.N.’s ongoing Zero Hunger challenge.

“I didn’t want two children this young, but I didn’t have a choice.”

For Wounaba, it’s a level of inaction that continues to cost her dearly. Now 16 years old, she has two sons who are clinically underweight. Both are frequently sick and have to be hospitalized. “I am afraid my children are suffering like I have suffered,” she told me, sitting outside the circular mudbrick hut she shares with her sister and two sons. She’ll move back in with her husband when her youngest son turns six months old. “I have no milk in my breasts and no food to feed them. I didn’t want two children this young, but I didn’t have a choice.”

In part, the failure by some nongovernmental organizations to take female empowerment into account when tackling malnutrition is little short of a telling oversight—raising questions both around who designs the programs and how sustainable they really hope their projects will be. 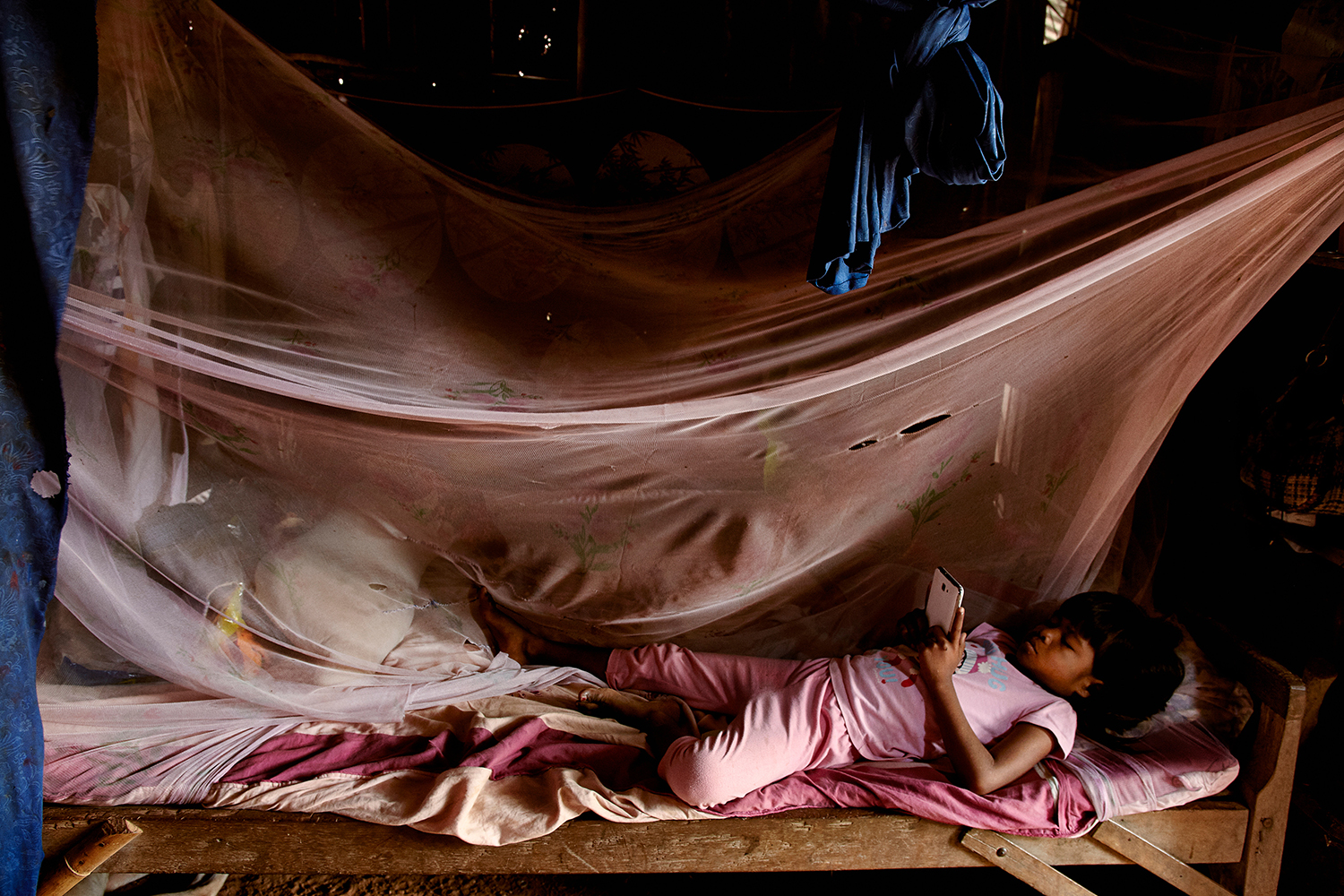 Nine-year-old Chinchin Kung nods when she’s asked if she’s hungry at her home in Phnom Penh, Cambodia, on Jan. 27, 2018. It’s been a day since she last ate anything solid, she said, although this morning she walked to the Buddhist temple nearby and begged tourists for money to buy an energy drink. Francesco Brembati for Foreign Policy

But those working in the sector also acknowledge another, more pressing roadblock: government funding and the stranglehold that the current U.S. administration has placed on women and girls’ reproductive services around the world. U.S. President Donald Trump’s 2017 reinstatement of the Mexico City policy—commonly known among critics as the “global gag rule”—has not only stopped all federal funding for nongovernmental organizations that provide abortion services, counseling, or abortion advocacy; it has also created an atmosphere of fear among other organizations, as they opt to give all family planning-related activities a wide berth in case their already-stretched budgets face cuts.

“There are more malnourished children, but their mothers are children too.”

Those in Cambodia say the situation is reaching a crisis point. Rates of teenage pregnancy across the Southeast Asian nation have nearly doubled since 2010. Malnutrition is also on the rise. U.N. statistics show approximately 80 percent of Cambodian children aged between 6 months and 8 months old are failing to receive the “minimum acceptable daily diet,” while 45 percent of children under the age of 5 in rural communities are growing up to be moderately or severely stunted.

“There are more malnourished children, but their mothers are children too,” said Nam Savshethao, a senior nurse at Dak Dam General Hospital on Cambodia’s eastern border, adding that most of the first-time mothers who she met in the district were aged between 13 and 17 years old. “We teach them how to breastfeed, and what to do if they can’t, which is common because they’re very young,” she said. “I think we should be telling them more about how to avoid having babies in the first place.” 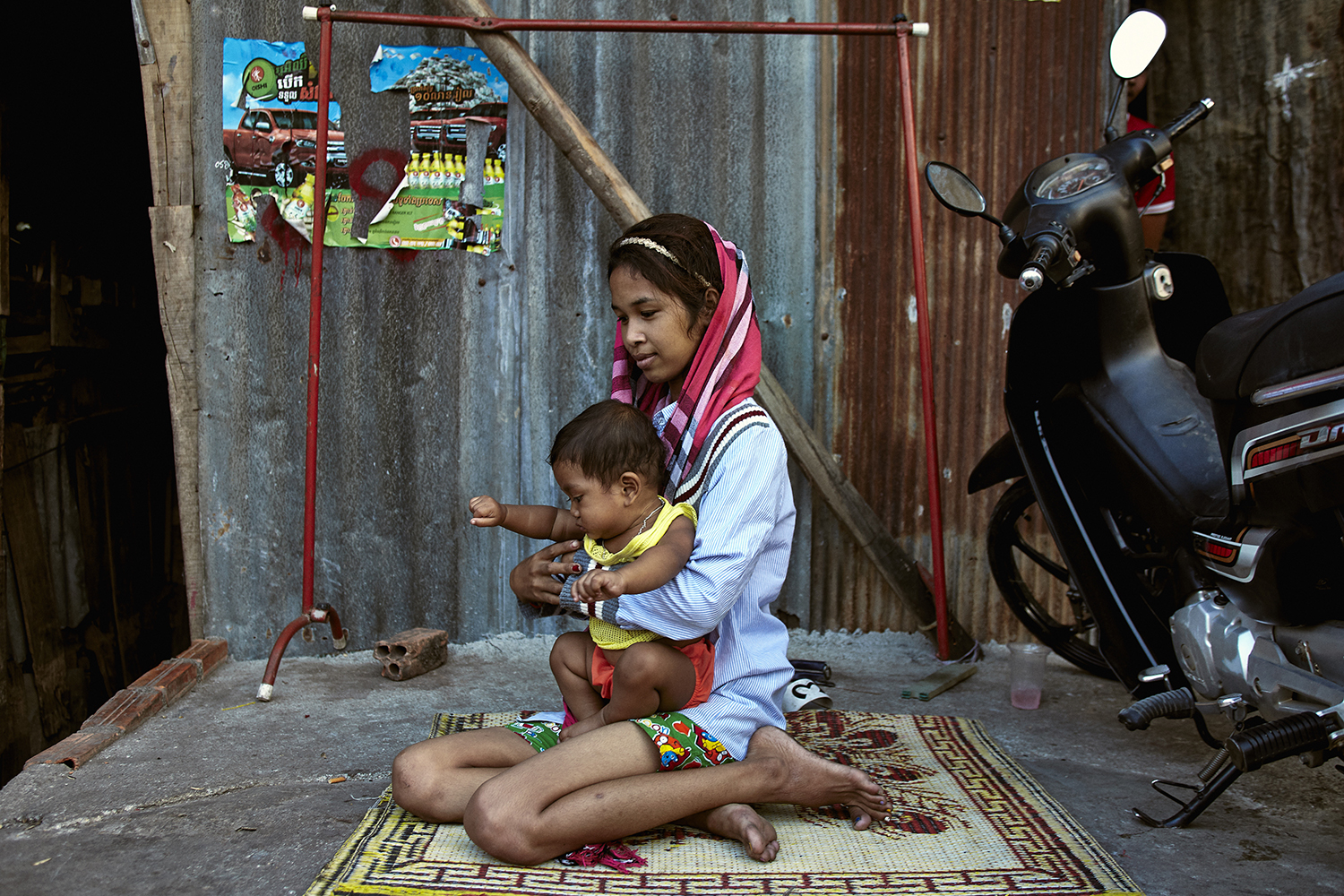 Kem Socheat, who is 18 or 19—she’s not sure, holds her 8-month-old son in the abandoned section of railway track where she lives in Phnom Penh, Cambodia, on Feb. 14, 2018. Francesco Brembati for Foreign Policy

Nurses at Marie Stopes International reproductive health clinics in both Siem Reap and Phnom Penh agreed. They said they were witnessing an uptick in the number of girls who were seeking abortions specifically because they were worried they wouldn’t be able to afford to feed a child.

Education around contraceptives across the country is too low, Marie Stopes’s Cambodia country director Amy Williamson told me in an interview in 2018. Were the clinics to close, she estimated there would be thousands of girls in Cambodia who would be forced to raise their children without enough food. Organizations designed to combat malnutrition across the country still seem unprepared for the coming challenges.

It’s a complacency that’s playing out around the world, and teenage mothers and their children are the ones suffering. In Guinea, Wounaba said she worried daily about returning to her husband and becoming pregnant for a third time. She can recite the signs of malnutrition by rote, she said, but she hasn’t heard of contraception and she never went to school. Her life might have been different if she had. “I would have liked to be a doctor,” she said. “If I had children when I was older, I think I would at least be able to afford rice.”

Corinne Redfern is Asia correspondent for the Fuller Project.