In Afghanistan, Religious Schools Are a Breeding Ground for Islamic State Influence

Countless madrassas are said to be funded by Gulf sources associated with the spread of extremist Salafist views.

KUNAR, Afghanistan—A small group of boys sits cross-legged on the floor, reciting the Quran under their breath, their bodies moving rhythmically to the Arabic words, in the light-flooded rooms of the religious school connected to the mosque in the village of Lamatak.

“At first I’d read the Arabic text without understanding, but our teachers are always here to answer our questions,” Fazil Haq, a green-eyed 14-year-old student, said excitedly. “God will be happy when I study the Quran.”

All of the children here in the madrassa in Afghanistan’s eastern Kunar province are getting their education free of charge. But Afghan security officials are increasingly concerned that too much of the money going to newly mushrooming madrassas such as this one could be encouraging extremism in the region. With the Kabul administration only able to financially support a minority of mosques and religious schools, money from Islamic State sympathizers might fund a growing majority of these institutions. Afghanistan’s Ministry of Hajj and Religious Affairs says there are likely tens of thousands of mosques in the country, but only about 7,000 are registered with the ministry. 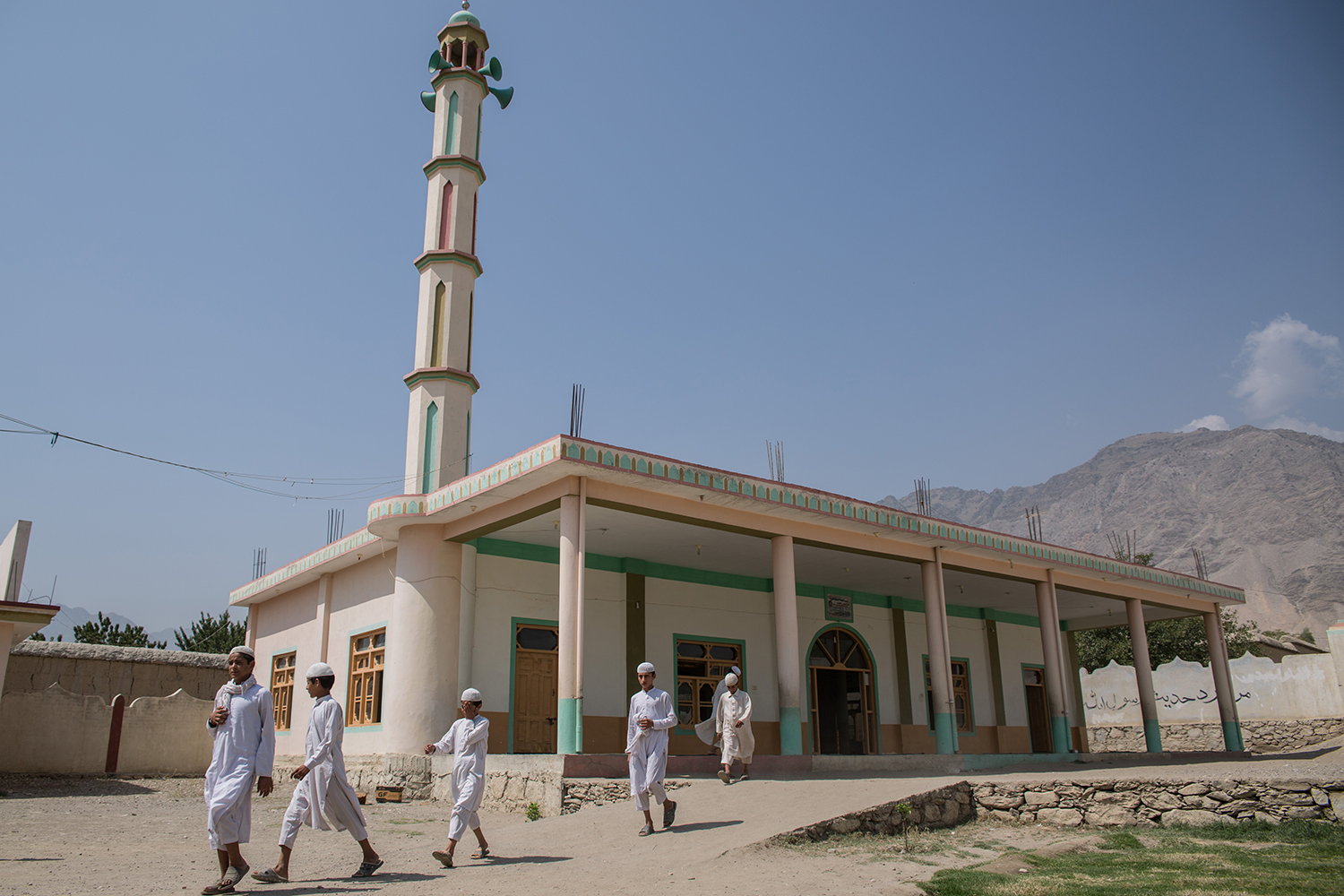 A group of boys stands outside Lamatak’s mosque on Sept. 16, 2019. Stefanie Glinski for Foreign Policy

“Of course that’s a problem, and it is mainly due to lacking funding,” said Fazal Mohammad Hussaini, the ministry’s spokesman. “The messages and Friday sermons in the registered mosques are largely controlled and prepared by the ministry, but not all of Afghanistan is under government control, and we don’t know for certain what some mosques might be teaching.”

“Not all of Afghanistan is under government control, and we don’t know for certain what some mosques might be teaching.”

Afghanistan’s intelligence agency, the National Directorate of Security, says some madrassa funding helps support Islamic State activities, though most religious leaders of both mosques and madrassas deny this. But as peace talks with the Taliban falter, some Afghan officials are worried about a rebirth of radical Islamism.

Mullawi Abdul Rahman, 25, who teaches about 90 students, said around 30 of them have come from all across Kunar and stay in the madrassa’s dorms, while the rest of the boys are local villagers.

But in Lamatak—home to about 300 families—villagers claim that at night, Islamic State fighters have been coming down from the nearby mountains, seeking shelter for the night in both houses and the mosque, before scattering again at dawn. Rahman denied this.

Lamatak’s mosque and madrassa, where Rahman is one of two teachers, was built four years ago with funding from Nejat, which in Arabic means “rescue,” an Afghan nonprofit with Kuwaiti funding and a base office in Jalalabad, the provincial capital of neighboring Nangarhar province. The mosque triumphs in bright colors over the otherwise simple mud houses that make up the village. But according to a security official who spoke under the condition of anonymity, family members of Nejat employees were detained for allegations of being linked to the Islamic State and remain in custody. 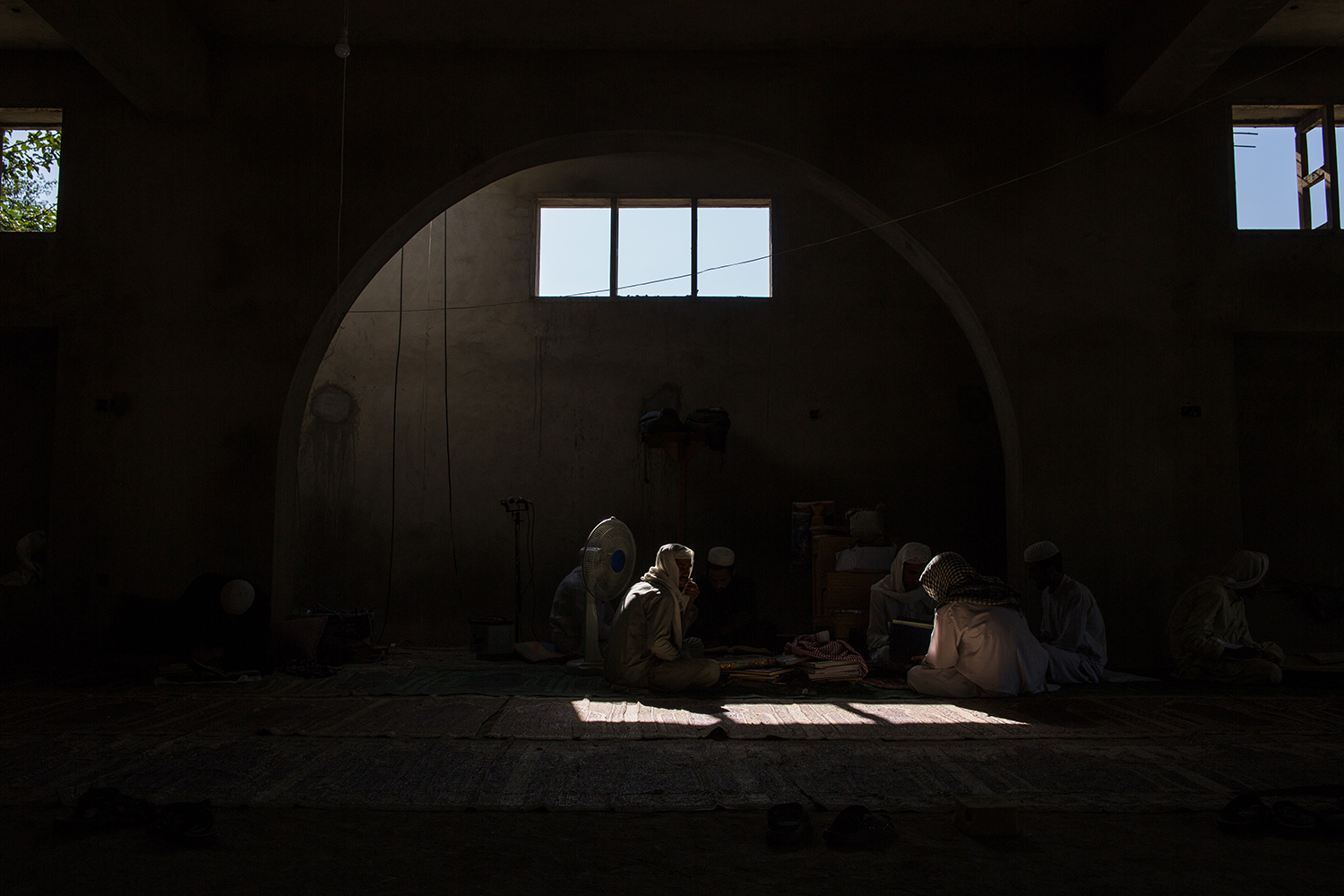 Students study at the mosque in Charakai village in Afghanistan’s eastern Kunar province on Sept. 16, 2019. Stefanie Glinski for Foreign Policy

Rahman, wearing a white tunic and a white scarf covering his head, considers himself a Salafist and studied Islam in a madrassa in nearby Pakistan when he was a teenager. He estimates that around 75 percent of people in Kunar follow Salafism today, but numbers are steadily expanding, not least due to the support of Gulf countries.

“The vast majority of Salafists are peaceful. While it is a marker of conservative Islam, it shouldn’t be equated with terrorism and extremism,” said Shiraz Maher, the author of Salafi-Jihadism: The History of an Idea and director at the International Centre for the Study of Radicalisation at King’s College London, adding that “most Salafists aren’t politically engaged.”

“The vast majority of Salafists are peaceful. While it is a marker of conservative Islam, it shouldn’t be equated with terrorism and extremism.”

Salafism dates back centuries, and its followers consider the earliest form of Islam to be the purest practice of the religion, adhering to a literal interpretation of the Islamic texts and laws. But many terrorism experts say it has been used to justify militant jihadism, and Islamic State militants claim to adhere by its principles.

“Some madrassas across the country have been infiltrated by ISIS since 2015,” said the independent researcher Nahid Ali Khan.

“It’s the perfect breeding ground for them,” an Afghan security official who spoke under condition of anonymity told Foreign Policy. “People are joining [the Islamic State] because the narrative of jihad is still alive, and they are partly funded through nonprofits or madrassas because it’s easier for money to enter the country through these official channels. The Islamic State wants central command in Afghanistan, and they want this to be in the east. It’s a strategic location with good supply roads—both near the capital, Kabul, and Pakistan’s border.” 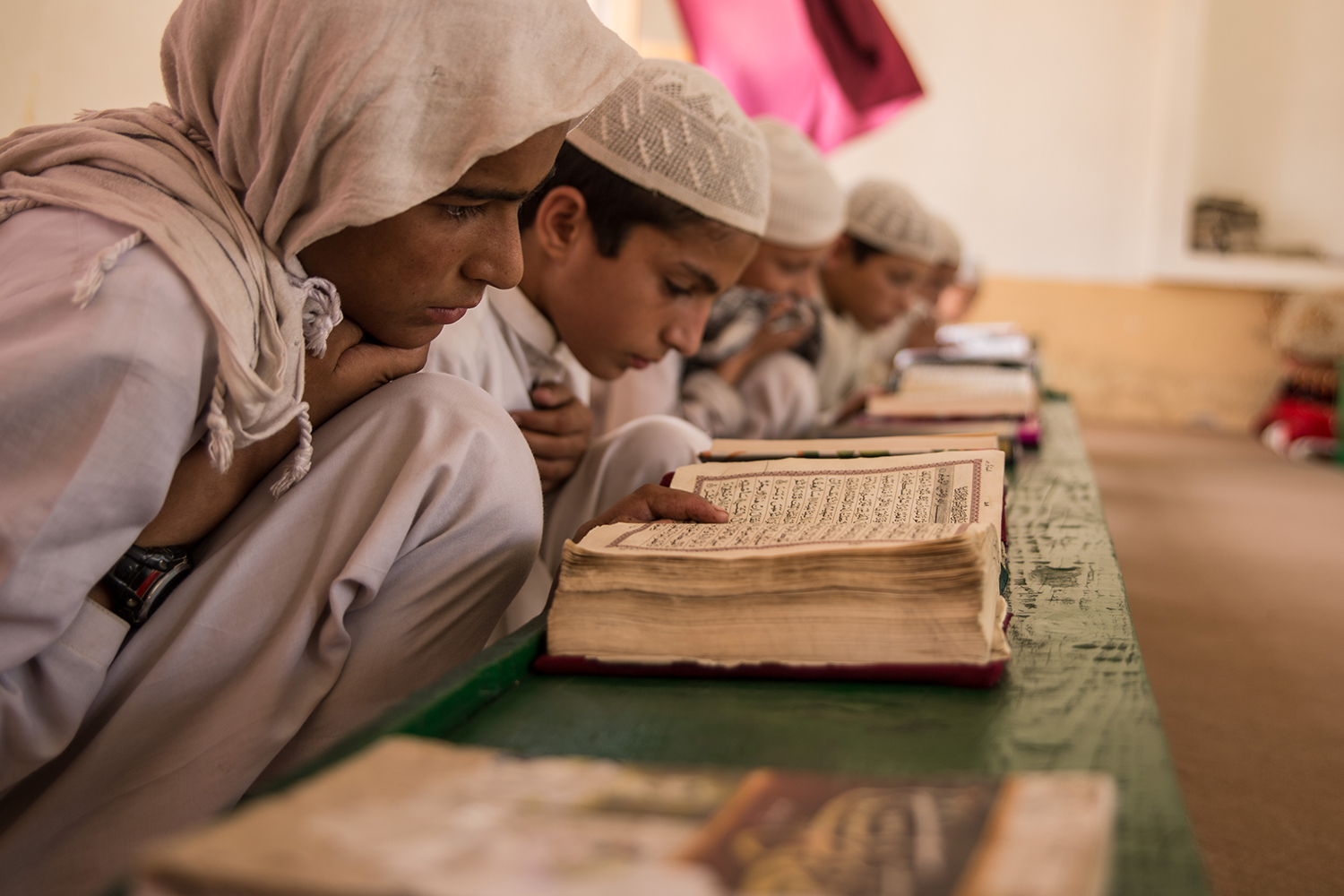 Boys study the Quran at the madrassa in Lamatak on Sept. 16, 2019. Stefanie Glinski for Foreign Policy

Afghanistan has seen decades of war, but large-scale military campaigns in recent months have seen the Islamic State presence shrink in eastern Nangarhar, with President Ashraf Ghani saying that the group’s “backbone was broken.” But while countless Islamic State fighters surrendered in Nangarhar and both the Afghan government and the Taliban are battling the group, thousands of fighters are still estimated to be active in Kunar province.

Kunar and Nangarhar, both in eastern Afghanistan and bordering Pakistan, have previously become a small haven for Islamic State fighters in the past, with some local villagers stating that they don’t mind the expansion of the group.

Abdul Hadi, a 48-year-old laborer from Kas Kunar district, said he has seen several young people in his village join the Islamic State.

“They do it because there is no justice in the government. It’s corrupt, and young people are angry. Daesh has become a new option for them,” he said, using the Arabic term for the group that most Afghans use. Hadi has noticed the shift in opinion throughout his district. “An acceptance for Daesh is growing because, like us, they are Salafists—and Salafism teaches us peace,” he said.

But Maher explained that Salafism can turn violent. “The issue of who becomes violent, or who becomes violent when, turns on the issue of legitimacy. So even for [Salafist] groups who might give loyalty and allegiance now, if they feel the government has later strayed into illegitimacy, they may feel new obligations towards armed resistance,” he said.

While most Salafists aren’t politically engaged, Maher added. “some believe in giving counsel or even in advising governments. Salafism is all around the world, partly because it is supported by the Gulf, but there are different traditions within it.” 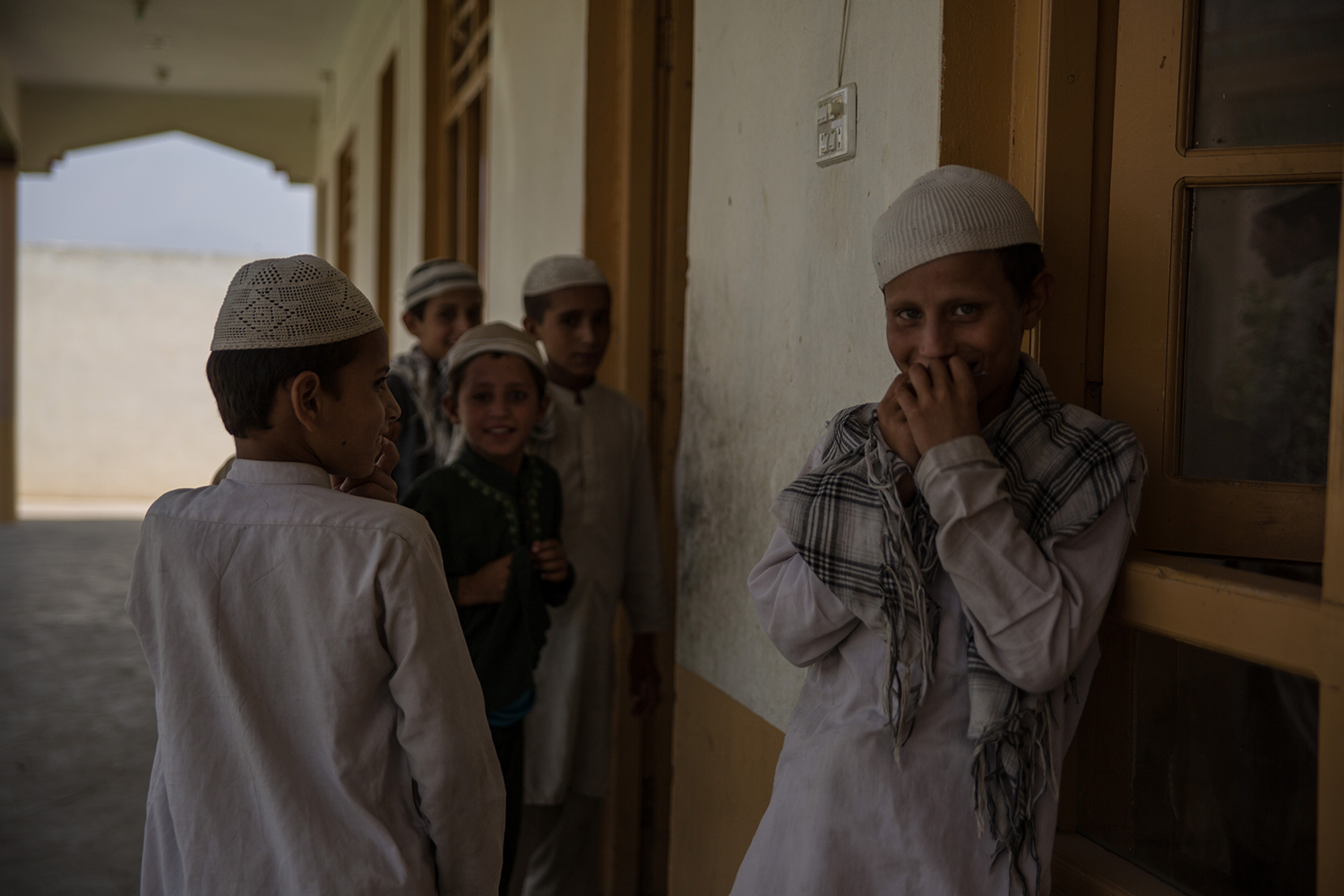 A group of boys gathers outside Lamatak’s mosque on Sept. 16, 2019. Stefanie Glinski for Foreign Policy

While Nejat is supporting Salafist mosques throughout Kunar, an Afghan security official said that another nonprofit, the Afghan People’s Relief Committee, supports a similar agenda in neighboring Nangarhar province, with—according to the official—much of the funding coming from Saudi Arabia, which has supplied money to extremist groups in the past.

Foreign Policy visited Nejat’s office in Jalalabad’s Angur Bar neighborhood and was welcomed with Arabic greetings when entering the compound. The head of the office refused an interview.

In Charakai village of Kunar, Mullawi Qary Hanifullah, 23, said none of his students are allowed to join militant groups after they finish their studies. He sits on a mat on the floor, a thick silver ring on his finger. Growing up, Hanifullah lived in Pakistan’s Peshawar, where he studied under a teacher who had been educated in Saudi Arabia, he said. “I teach my students to study hard and work for their country,” he said of the approximately 180 students. His mosque has likewise been supported by Nejat, indicated by a large sign near the entrance.

The Taliban, he said, wouldn’t send their children here, as they follow the Hanafi tradition of Islam. “This is a Salafi mosque and madrassa, and most people in Kunar follow exactly that tradition—and it is still on the rise.”