Migration and higher fertility can’t alter the course of Europe’s graying, but there is a strategy to avoid disaster.

The popular narrative of the aging of Europe suggests a grim future of decline: Many fear sinking standards of living and a flood of people dependent on social services, or, as the Financial Times put it last week, a “demographic time-bomb.” Acknowledging this anxiety, European Commission President Ursula von der Leyen recently appointed a vice president of democracy and demography, with the goal of launching a public debate on aging and the people it could leave without proper social protections or infrastructure.

Discussion about how to solve Europe’s aging problem gained prominence during the European refugee crisis of 2015. Many argued that new migration was necessary to keep up Europe’s social systems. “The equation is clear: to meet its workforce deficit and maintain its economic dynamism, Europe needs migrants,” then-United Nations Secretary-General Ban Ki-moon said in Brussels in 2015. That argument still shapes discourse around immigration: “Unless we want to gradually turn into an aging continent, we need new blood,” Spain’s then-Foreign Minister Josep Borrell, now the European Union’s foreign minister, said in 2018.

The crisis also sparked a three-year investigation by the European Commission into the EU’s demographic future, which I contributed to as a co-author. The findings, released last June, detail a sobering reality: More migration or higher fertility rates won’t change the momentum toward an aging society and a weakening labor force.

There is no prospect for meaningfully altering Europe’s aging.

Regardless of which policies are adopted over the next decade, there is no prospect for meaningfully altering Europe’s aging. In the long term, migration has limited effects on aging populations, because newcomers inevitably get older, adding to both the populations of workers and nonworkers over time. Even if EU countries overcome their different views and unite behind an approach to migration as open as Canada’s, adding over 100 million people by 2060, the average age in Europe will continue to climb.

The real dangers of a graying society can be seen in the labor force dependency ratio, the proportion of people who are not self-supporting relative to productive workers. For example, an unfavorable balance in France has prompted the government to plan pension reforms, recently setting off a month of public sector strikes and protests.

Commentators often rely on simplistic indicators, assuming that age structure alone determines the future health of the labor force. Such metrics overlook three key transformations in labor participation and education that could help maintain the current near-balance between dependents and workers in Europe.

First, Europeans are enjoying longer lives with more years in good health than ever before, thanks to medical advances and healthier lifestyles. That means they can stay active in the labor force for longer, which warrants a fundamental reappraisal of when working life ends and old age begins in many societies. Ten EU countries are taking prudent action by linking retirement age to life expectancy, limiting the average number of dependent years later in life. 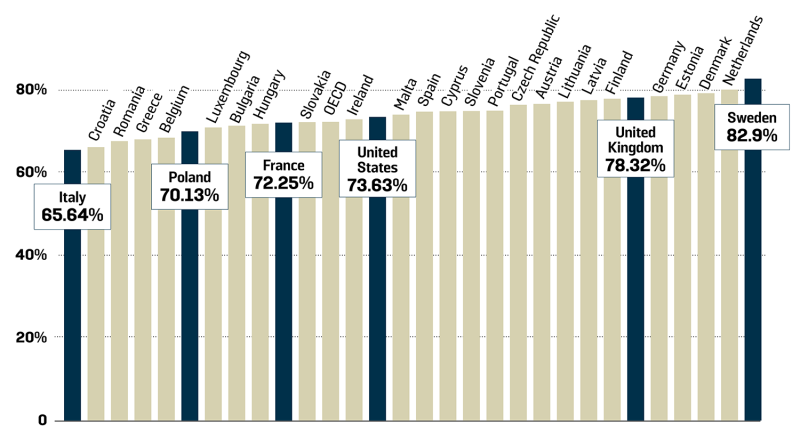 If the EU gradually boosts labor participation rates for men and women to match those in Sweden today, the feared spike in dependents—about a 30 percent increase by 2060—would be nullified. Sweden’s high labor participation owes in part to its to incentivization policies, including earned income tax credits, separate taxation with lower rates for part-time work, and stricter criteria to qualify for disability benefits and pensions.Growing female labor participation is converting a large part of Europe’s population from dependents to workers.

Poland and Hungary, which have illiberal migration policies, are perhaps the EU’s most outspoken pro-natalists—embracing state support for fertility to boost their workforces in the long term. Poland provides new parents a sizable monthly allowance for each child. Hungary, meanwhile, has expanded kindergartens, has subsidized loans for family homes and cars, and is even testing out offering leave for new grandparents who are not yet retired. The birthrates of these countries are showing signs of recovery, but for now the effects remain overshadowed by emigration to Western Europe.

Of the various scenarios laid out in the European Commission study, the youngest possible future for the EU resulted from a theoretical push for a better work-family balance that supports women so they can have a number of children closer to what they reportedly desire: around 2.3 children, or slightly above replacement level. But closing the gap between actual and desired fertility would bring greater demographic stability only after decades—a goal for countries that can base their planning on the time scale of generations.

The third major transformation is that the future EU labor force will look different from today’s. Workers are expected to be better educated, with far fewer people who ended their education at secondary school or earlier. The number of workers who have graduated from technical training or university is projected to expand to nearly 40 million by 2060, comprising nearly 60 percent of the labor force. 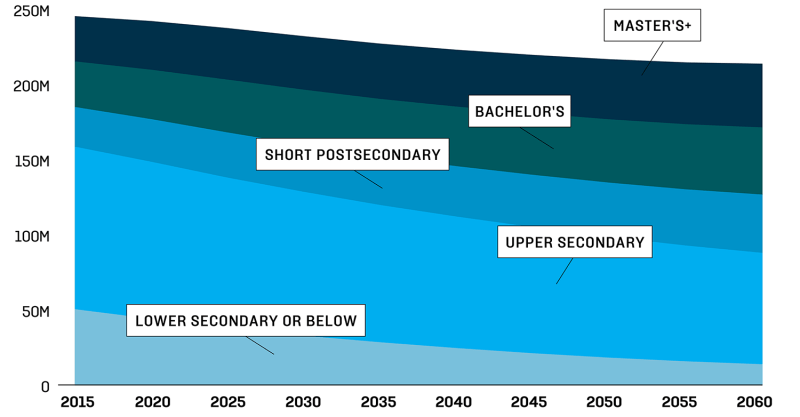 Source: Centre of Expertise on Population and Migration

Adaptability in the face of artificial intelligence and automation will be perhaps the greatest asset of a better-educated labor force. Economists do not agree on the ultimate impact of AI technology in terms of jobs lost or created, but they do forecast massive disruptions to the status quo. To maximize the future benefits of a larger post-secondary education system, administrators should ensure curriculums anticipate in-demand skills and proactively guard against pressures to inflate grades or undermine the value of academic degrees as they become less exclusive.

That Europeans can expect longer lives in good health is a historic achievement. Population aging is a mark of success. Indeed, nearly all populations of the world are now moving toward older versions of themselves, with Europe further along than most. This new demographic frontier calls for setting realistic expectations and a viable, long-term vision. Population aging is inevitable, but it’s manageable.

Savoring his partial China deal and passage of the new NAFTA, the U.S. president turns his sights on America’s closest allies. But he may have less success there.

New arrivals are ticking up again, but Europe doesn’t even have a short-term plan in place—much less a long-term strategy.

Nicholas Gailey is a demographer focusing on Europe at the International Institute for Applied Systems Analysis in Austria.

Savoring his partial China deal and passage of the new NAFTA, the U.S. president turns his sights on America’s closest allies. But he may have less success there.

New arrivals are ticking up again, but Europe doesn’t even have a short-term plan in place—much less a long-term strategy.