NOWSHERA, Pakistan—When 30-year-old Meher Nigar, a polio vaccinator from Pakistan’s northwestern city of Nowshera, knocked on a woman’s door last April, she was greeted with anger and immediately asked to leave. A month before, another woman had chased Nigar out of the house with a knife, saying that she would not accept her vaccination.

“It’s very difficult,” Nigar told me last May. “In some areas, the entire community is against us. In my opinion, the authorities cannot easily control the situation.”

As a front-line health worker for the Pakistani government, Nigar had encountered obstacles before, but she has still been shaken by the scale of vaccine refusals. Over a three-day period in spring 2019, Nigar tallied that nearly 300 of the homes she visited had rejected the polio vaccine.

Today, Pakistan has the world’s highest number of polio cases, and it remains one of only two countries in the world (along with Afghanistan) where the virus is endemic. The number of new cases surged to 137 in 2019, representing the first spike in incidents since 2014. In October 2019, the World Health Organization released a statement saying it was “gravely concerned” about the “widespread” uptick in cases in Pakistan, lamenting that the figures represented a reversal in progress made in recent years.

Part of the resistance to the vaccine stems from the legacy of a fake vaccination program run by the CIA a decade ago in Abbottabad, Pakistan, as part of the effort to ferret out information on the al Qaeda leader Osama bin Laden’s whereabouts. In some areas, moreover, locals vehemently believe that the vaccine is part of a Western project to sterilize Muslims. For years, administering the vaccine to children placed front-line health workers directly under attack, with a 2012 Pakistani Taliban fatwa inciting the deaths of polio workers. Last April, two armed guards and a vaccinator were killed, drawing the total death count to more than 90 over the past seven years. 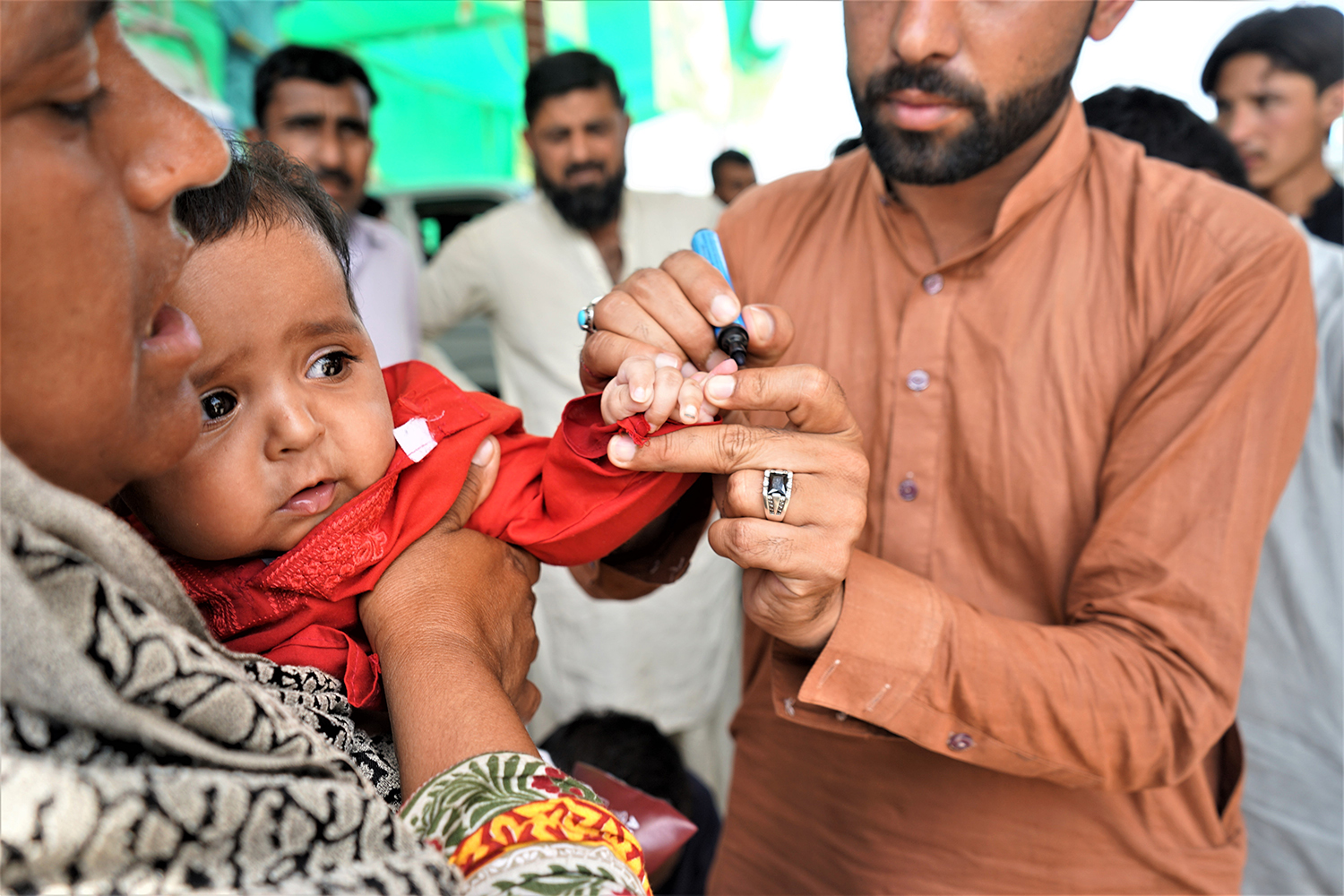 A child has his finger marked to indicate he has been vaccinated after receiving oral polio drops in Rawalpindi, Pakistan, on April 23, 2019. Sabrina Toppa for Foreign Policy

Last spring, Nigar’s neighbors sat in her home and angrily implored her not to visit during her door-to-door vaccination campaign, citing concerns that the vaccine might poison their children or lead to infertility. During polio campaigns, the government provides Nigar with an armed security guard and also gives her 2,000 rupees (about $13) on top of her monthly 18,000-rupee ($116) salary to help her achieve key health objectives. But the guards do little to assuage her anxiety. “Even if there is a security guard with me, I am still a little afraid of the situation,” Nigar says.

But given the growing number of polio cases in the country, it’s Pakistanis who should be alarmed. Polio primarily affects children under the age of 5, sometimes causing paralysis or permanent disability. It often spreads through contaminated water or food. In extreme cases, it can even spread when under-vaccinated communities are exposed to a different strain of the polio virus than what they’re protected against.

Starting last July, in Pakistan’s northern Gilgit-Baltistan and Khyber Pakhtunkhwa regions, several cases of polio began appearing that were markedly different from the norm. Globally, there are three types of the polio virus: types 1, 2, and 3. Only types 1 and 3 circulate in Pakistan; the country stopped administering a vaccine against the type 2 virus in 2016, after cases stopped appearing in Pakistan. Last summer, however, the type 2 virus came roaring back in the form of vaccine-derived cases in remote areas of the country.

First, during a normal immunization day, a health worker noted that a 2-year-old girl was limping and unable to walk in Diamer, Gilgit-Baltistan. The worker knew that any child exhibiting this type of muscle weakness might be presenting symptoms of polio, prompting him to send her stool sample to a lab in Islamabad. Later in the summer, he returned to Gilgit-Baltistan to investigate the case further, collecting stool samples of children to see if it was an isolated case or a trend. In the lab, the virus did not resemble the type 1 or type 3 virus circulating in Pakistan, leading officials to worry that another vaccine, used to treat type 2 of the polio virus, had been imported and had led to incidents of that disease. 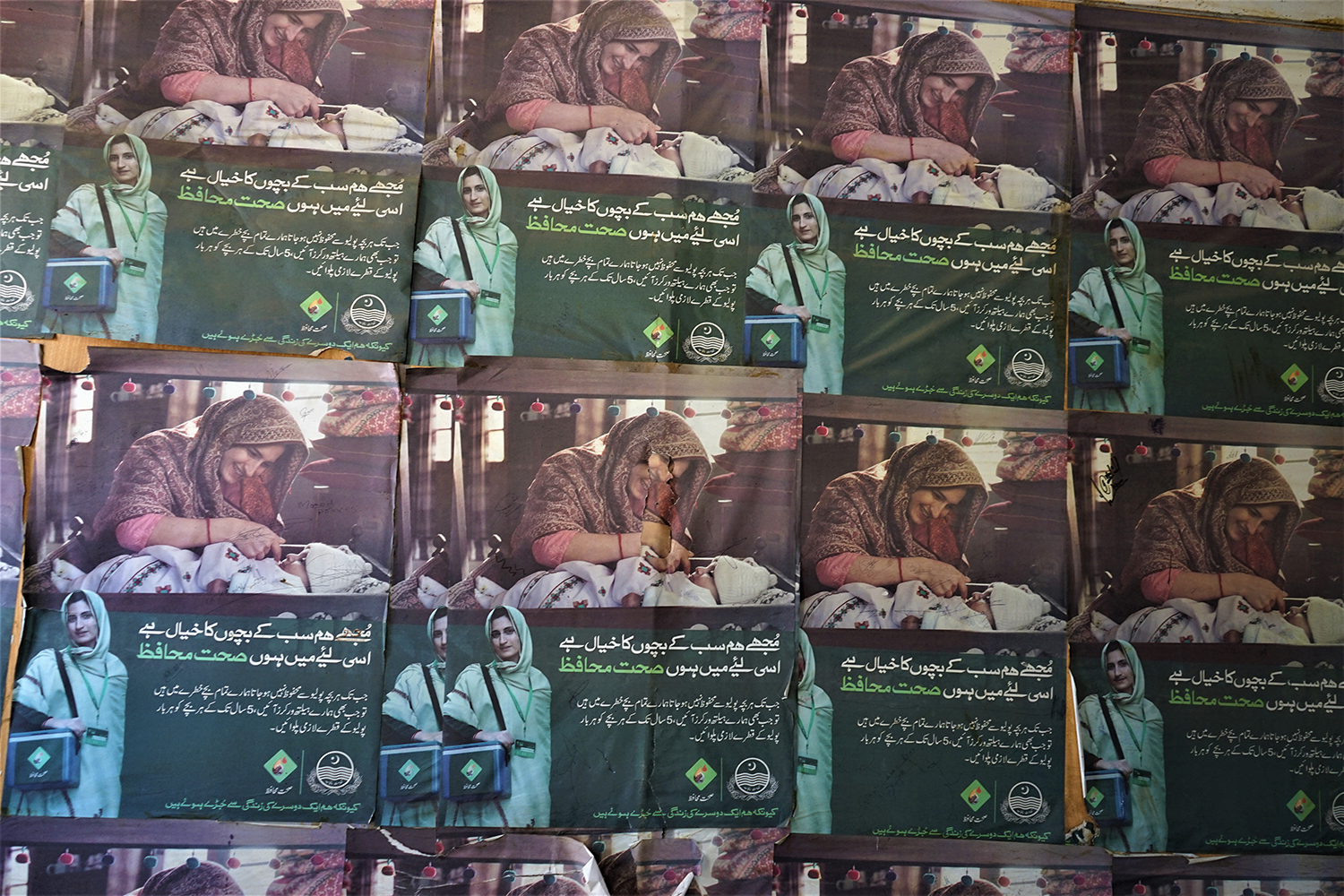 A public service announcement about the polio vaccine in Rawalpindi on April 23, 2019. Sabrina Toppa for Foreign Policy

Given that a weakened form of the polio virus exists in every oral vaccine, it is possible for vaccine-derived poliovirus cases to materialize in under-vaccinated communities where basic sanitation, nutrition, and health outcomes are already poor and immunity is weak. In these cases, the introduction of a mutated virus can endanger and even disable children.

With the type 2 vaccine now only used in Africa, health officials believe the virus may have been introduced into the environment through the waste of travelers coming from the Horn of Africa, perhaps either itinerant religious travelers known as Tablighi Jamaat or a Pakistani contingent of a United Nations peacekeeping mission that had been in Africa.

The vaccine-derived cases were sent to the Washington-based Centers for Disease Control and Prevention for verification, but they were not included in a public count of Pakistan’s polio cases. After the country’s polio program was accused of covering up information, Pakistan has since started listing the number of vaccine-derived cases on a government website. 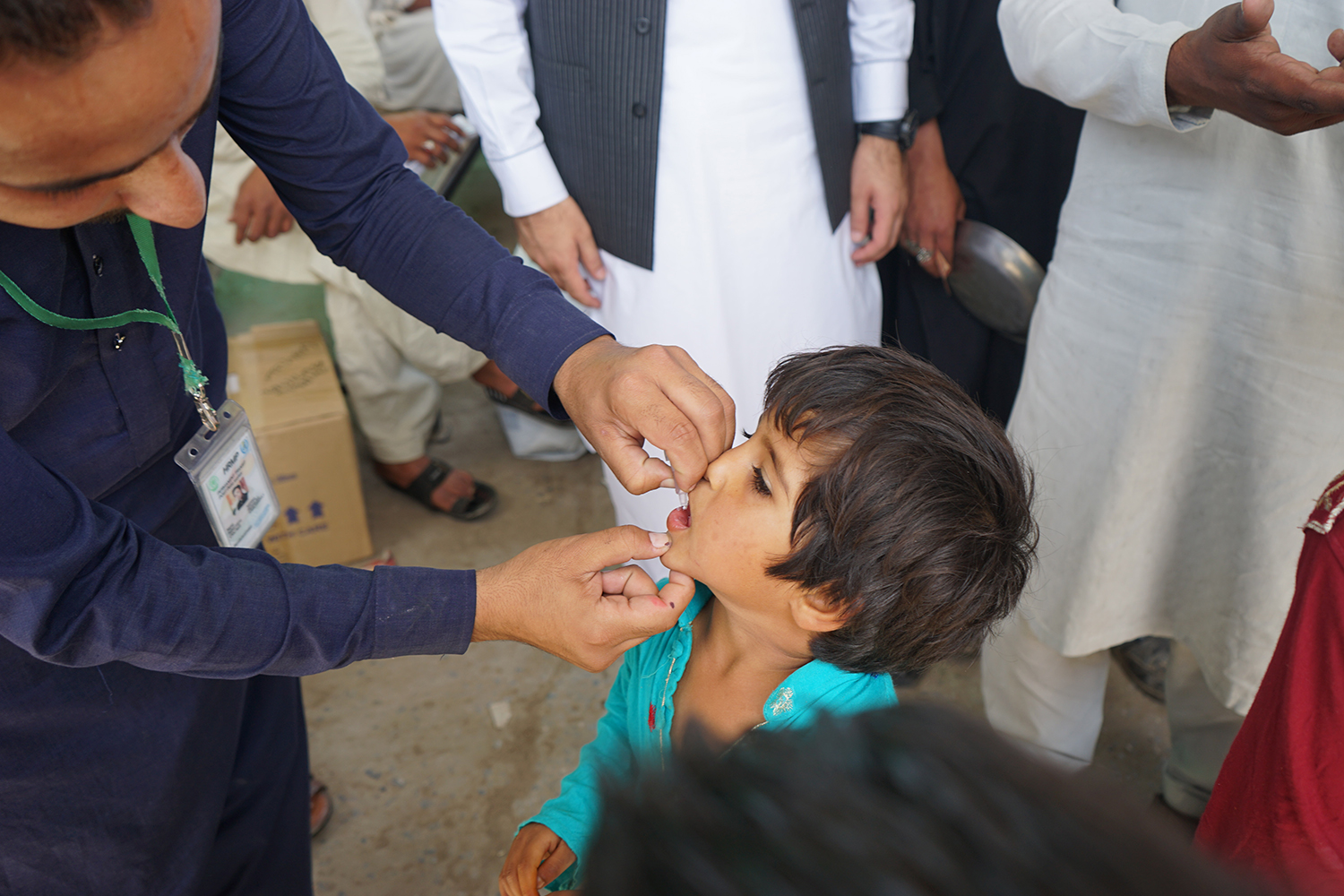 A child receives oral polio drops during a vaccination drive in Rawalpindi on April 23, 2019. Sabrina Toppa for Foreign Policy

For a polio campaign regularly buffeted by misinformation—and already set back by one of the worst years for polio outbreaks—the allegations of a cover-up were bad news. However, the episode did underline the importance of two groups vital to the success of Pakistan’s polio campaign: female vaccinators and religious leaders.

In high-risk areas, Pakistan relies on a predominantly female workforce of vaccinators drawn from the local community. These women reside in the same neighborhood as their target population; their long-standing ties foster trust and decrease the probability of a vaccine refusal. Public health officials say that this community-based model, widely used next door in India until it eradicated polio in 2014, has been instrumental to restoring trust. Female vaccinators, moreover, have been able to access domestic spaces men are blocked from, which has helped quell suspicions that a nefarious Western agenda lurks behind the polio campaign.

Approximately a third of vaccine refusals in Pakistan occur because of religious reasons.

Nosherwan Khalil, Rotary International’s Punjab coordinator for the polio program, said the inclusion of local women has improved coverage and reduced refusals. “Women in Pakistan have been the true heroes in our polio eradication program,” Khalil said. “They face challenges from both within and outside the community but continue to work for the children of Pakistan.” According to Rotary International, community-based vaccination teams led by women have brought the vaccine acceptance rate up ­to 95 percent in some areas of the country.

In addition to recruiting female vaccinators, for the past few years, Pakistan has also been mobilizing Muslim religious leaders to build awareness about polio. Approximately a third of vaccine refusals in Pakistan occur because of religious reasons, Qibla Ayaz, the chairman of the Council of Islamic Ideology, a body that worked with the government to endorse hundreds of pro-vaccine fatwas, told me this winter.

In high-risk areas like Nigar’s city of Nowshera, teams carry fatwa pamphlets with endorsements of vaccination from nearly every school of Islamic thought. Countering ambivalence is the central aim, and the polio campaign works with mosque leaders who use their moral authority to convey its health benefits. In the past, parents who refused vaccinations could be arrested, but the state has recently walked back from enforcing that policy, believing that doing so may only imperil Pakistan’s larger eradication effort. 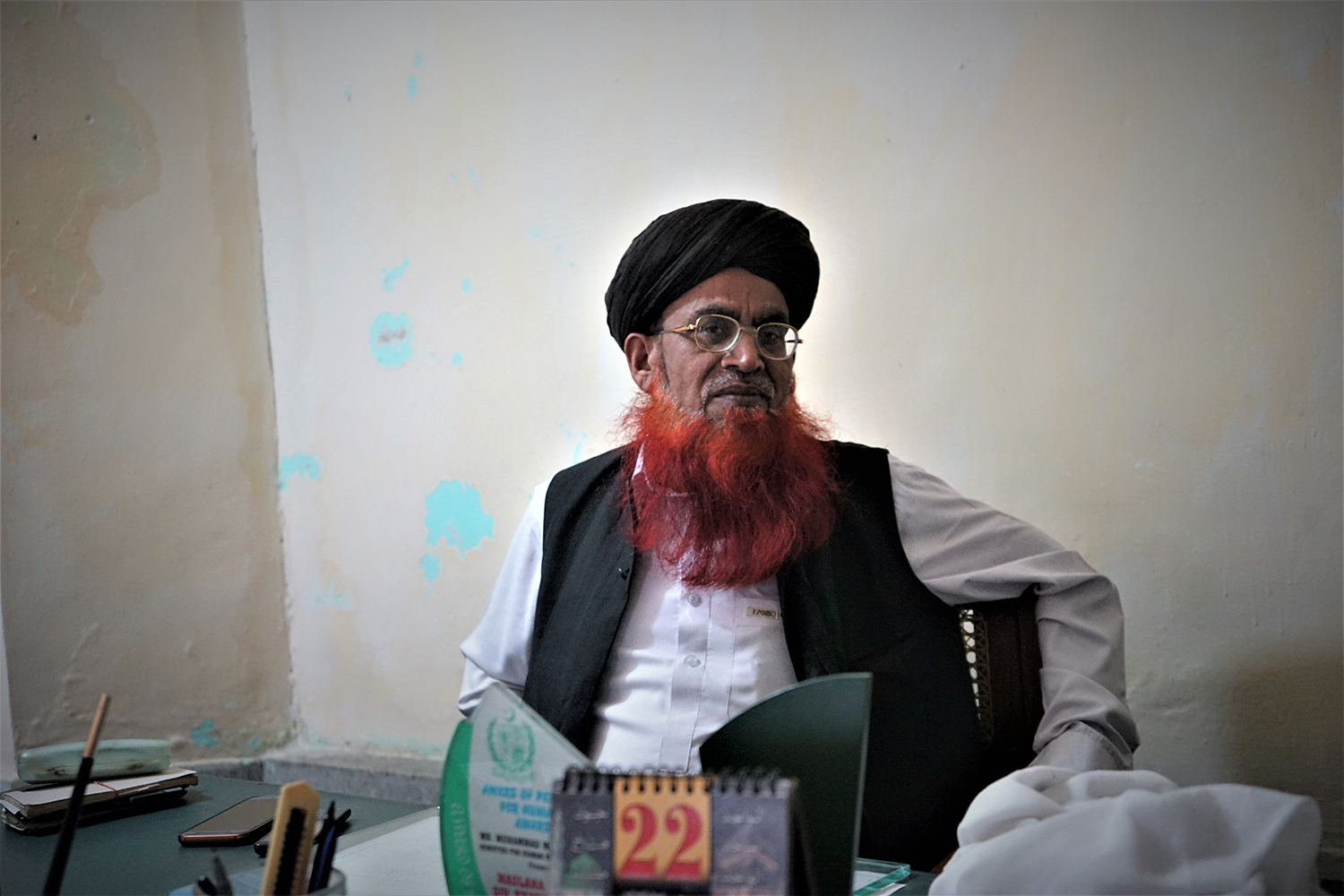 In Rawalpindi’s historic Markazi Jamia Mosque, Hafiz Iqbal Rizvi, a Muslim scholar, delivers pro-vaccine sermons and says that false propaganda has been circulating against the polio vaccine for years. “It is necessary to vaccinate children,” he affirmed. Rizvi is quick to distance himself from the right-wing Islamist groups propagating false information, saying that the country’s mainstream religious establishment has nothing to do with it. “We have no cure for the propaganda,” Rizvi said, adding that he even gives the vaccine to his own children. “We are with the government and its polio partners.”

“We have no cure for the propaganda,” Hafiz Iqbal Rizvi said. “We are with the government and its polio partners.”

Indeed, for nearly a decade, Rizvi has been personally involved in Pakistan’s fight against polio, standing firm that the vaccine is safe amid recent waves of panic. During times of concern, Rizvi has written letters to mosques to help vaccinators enter communities where paranoia and resistance still impede access. Khalil said it’s been successful: “Many Pashtun communities are still reluctant to administer the oral polio vaccine to their children until the imam announces in the mosque that all children must be vaccinated. Religious leaders play a key role in illiterate areas of the community.”

“Nobody comes up with any evidence,” Rizvi said about the misinformation campaigns surrounding polio, which set social media ablaze last spring and even led a frenzied mob to torch a government health facility in Khyber Pakhtunkhwa province. “Whenever we go into meetings, we tell the community that this propaganda is false and we support the polio vaccination program.” Questions about vaccine-derived cases have also flooded into the country’s newly established 24/7 WhatsApp polio help line and polio call center, leaving people like Rizvi and others to explain the urgency of accepting multiple rounds of immunization to cover different types of the poliovirus. This month, the government reached 3.6 million children during a campaign to specifically vaccinate against type 2 of the virus, requiring female vaccinators and religious leaders to step in and explain why so many rounds of vaccination were occurring in quick succession.

As the government redoubles its efforts to rebuild trust in the vaccine, it is clear that Pakistan’s most effective strategy may be to rely on women and religious leaders. As the global polio campaign inches closer to eradicating the virus, success will depend on the backing of the Pakistan’s most influential agents for social change.

Sabrina Toppa is a journalist based in Pakistan. Her stories have been published by The Guardian, TIME Magazine, The Washington Post, NBC News, Public Radio International, and Al Jazeera English, among other outlets.

The Polio Capital of the World

Pakistan's Army and Lady Health Workers are at the center of the global effort to eradicate polio. How successful have they been?

While the country's path to eradication hasn’t been easy, there is now reason for optimism.

The country’s vaccinators have overcome distrust, misinformation, and an insurgency to reach this point, but they can’t stop yet.