WHO Chief Arrives in China Amid Growing Virus Fears

Global health experts are mounting a response to the Wuhan coronavirus, as China’s official figures rise.

Here is today’s Foreign Policy brief: The head of the World Health Organization arrives in China as fears over the Wuhan virus rise, Israeli leaders head to the White House to discuss Trump’s Middle East peace plan, and what to watch in the world this week.

How Will the World Respond to the Wuhan Virus?

Here is today’s Foreign Policy brief: The head of the World Health Organization arrives in China as fears over the Wuhan virus rise, Israeli leaders head to the White House to discuss Trump’s Middle East peace plan, and what to watch in the world this week.

How Will the World Respond to the Wuhan Virus?

Chinese official figures on the Wuhan virus keep rising: On Monday, 2,744 cases had been confirmed and the death toll had risen to 80—with all but four in Hubei province. Major cities there including Wuhan remain on lockdown, though some experts have called the effectiveness of the quarantines into question—particularly if the virus is carried by people without symptoms. There is still limited information about how easily it spreads, and it is difficult to recognize, as Annie Sparrow reports for FP.

The head of the World Health Organization (WHO), Tedros Adhanom Ghebreyesus, is in Beijing, where he is expected to meet Chinese officials and medical experts about the response to the outbreak. The WHO has not yet declared the Wuhan virus a global emergency. “The epidemic is now entering a more serious and complex period,” said Ma Xiaowei, the director of China’s National Health Commission. “It looks like it will continue for some time, and the number of cases may increase.”

Hong Kong takes action. There are six confirmed and 77 suspected cases of the Wuhan virus in Hong Kong, which has so far refused to block travel from mainland China in general. On Sunday, authorities did ban residents of Hubei province from entering the city. Hundreds of citizens protested the city’s plans to convert an empty apartment building into a temporary quarantine zone, blocking roads and throwing Molotov cocktails.

What’s next? The confirmed numbers could represent just a fraction of the total number of cases: The virus has a long incubation period, and hundreds of thousands of people left Wuhan before Lunar New Year, as FP’s James Palmer explains. Still, there is not cause for global panic: “The coronavirus is highly worrying, but so far it lacks the pandemic properties of influenza and has a relatively low—experts believe—mortality rate,” he writes.

Trump hosts Netanyahu and Gantz. Today U.S. President Donald Trump is scheduled for back-to-back meetings with Israeli Prime Minister Benjamin Netanyahu and opposition leader Benny Gantz at the White House. There, U.S. officials are expected to release details of Trump’s delayed Middle East peace plan, though it is unclear when the plan will be made public. Trump meets Netanyahu first and Gantz second, and on Tuesday he will deliver joint remarks with Netanyahu. The meetings come ahead of Israel’s March election, in which Netanyahu will face off against Gantz, again.

Italy’s Salvini loses key local election. Exit polls in Italy’s Emilia-Romagna regional election on Sunday showed the left-wing Democratic party ahead of a right-wing coalition led by Matteo Salvini’s League party. The apparent loss foils Salvini’s plan to push the left-leaning region to the right, which could have triggered a political crisis at the national level. After a significant campaign that saw Salvini challenged by the grassroots Sardines protest movement, turnout in the election was much higher than in the region’s last vote. Salvini is broadly popular across Italy, but he has struggled to mount a comeback after backing out of the coalition government in August.

Travel ban expansion expected today. The Trump administration’s travel ban could be expanded today to include seven countries: Belarus, Eritrea, Kyrgyzstan, Myanmar, Nigeria, Sudan, and Tanzania. (It remains unclear if the ban will apply to all U.S. visas.) Meanwhile, the 2017 travel ban, which applied mainly to Muslim-majority countries, heads to a federal appeals court in Richmond on Tuesday. The court will consider three lawsuits filed by U.S. citizens or permanent residents whose family members have been stopped from entering the United States. The Trump administration has asked the court to dismiss the suits.

Bolton’s book and Trump’s impeachment trial. Impeachment proceedings continue this week in the Senate, with the president’s lawyers wrapping up their defense by Tuesday. Once the opening arguments are completed, senators will have up to 16 hours to ask questions—in writing. Debate over whether the Senate should subpoena witnesses or documents is expected to start on Friday.

Portions of former National Security Advisor John Bolton’s draft book manuscript—circulated among various associates who described the draft to the New York Times—could throw a wrench in Republicans’ plans for a quick trial. Bolton’s book reportedly describes Trump’s decision to withhold aid to Ukraine in detail and reveals the involvement of other top officials, including Attorney General William Barr and Secretary of State Mike Pompeo. If witnesses are called, the trial would extend into next month.

World leaders meet in Poland today to mark the 75th anniversary of the liberation of the Auschwitz death camp, with ceremonies held there. More than a dozen heads of state will be in attendance—fewer than traveled to another event held in Jerusalem last week. Polish President Andrzej Duda was absent at the Israeli memorial, due to an ongoing feud with Russia over World War II history.

The U.K.-EU withdrawal agreement is up for a final vote in the European Parliament on Wednesday, with lawmakers expected to pass the deal put forward by British Prime Minister Boris Johnson’s government. The vote comes just ahead of the Brexit deadline on Friday, with Britain leaving the EU at midnight central European time. (It will remain in the EU’s single market and customs union until the end of the year.)

The U.S. Federal Reserve Bank meets this week, holding a press conference on Wednesday. Expect interest rates to hold steady: Though Trump has pushed for negative interest rates, notes from the Fed’s October meeting suggest that officials are concerned doing so could disrupt the U.S. financial system.

U.S. Secretary of State Mike Pompeo travels to Ukraine on Thursday and will meet President Volodymyr Zelensky in Kyiv on Friday, as well as other top officials. The visit, which coincides with Trump’s impeachment trial, is intended to show that the United States stands by Ukraine. It comes at an awkward time for Pompeo, who over the weekend publicized an angry letter accusing an NPR journalist of violating an agreement over the terms of an interview and not being able to find Ukraine on a map. NPR has responded by publicizing emails that contradict Pompeo’s account.

Unrest in Iraq. Anti-government unrest continues in Baghdad, where security forces killed at least one protester on Sunday and set protesters’ tents on fire. The demonstrations began in October but have accelerated again since the U.S. assassination of Iranian military commander Qassem Suleimani in Baghdad. Demonstrators are demanding that the entire government step down. Nearly 500 people have been killed during the protests so far.

Peru’s new legislature. Peru’s voters elected a split Congress on Sunday, with a center-right party winning the most seats: just 24 out of 130. The election means the right-wing Popular Force party led by Keiko Fujimori, the daughter of a former president, has lost the legislature. Still, the new Congress will be replaced next year, when Peruvians return to the polls to elect a five-year legislature and a new president.

Afghan Refugees Are Stuck in Turkey 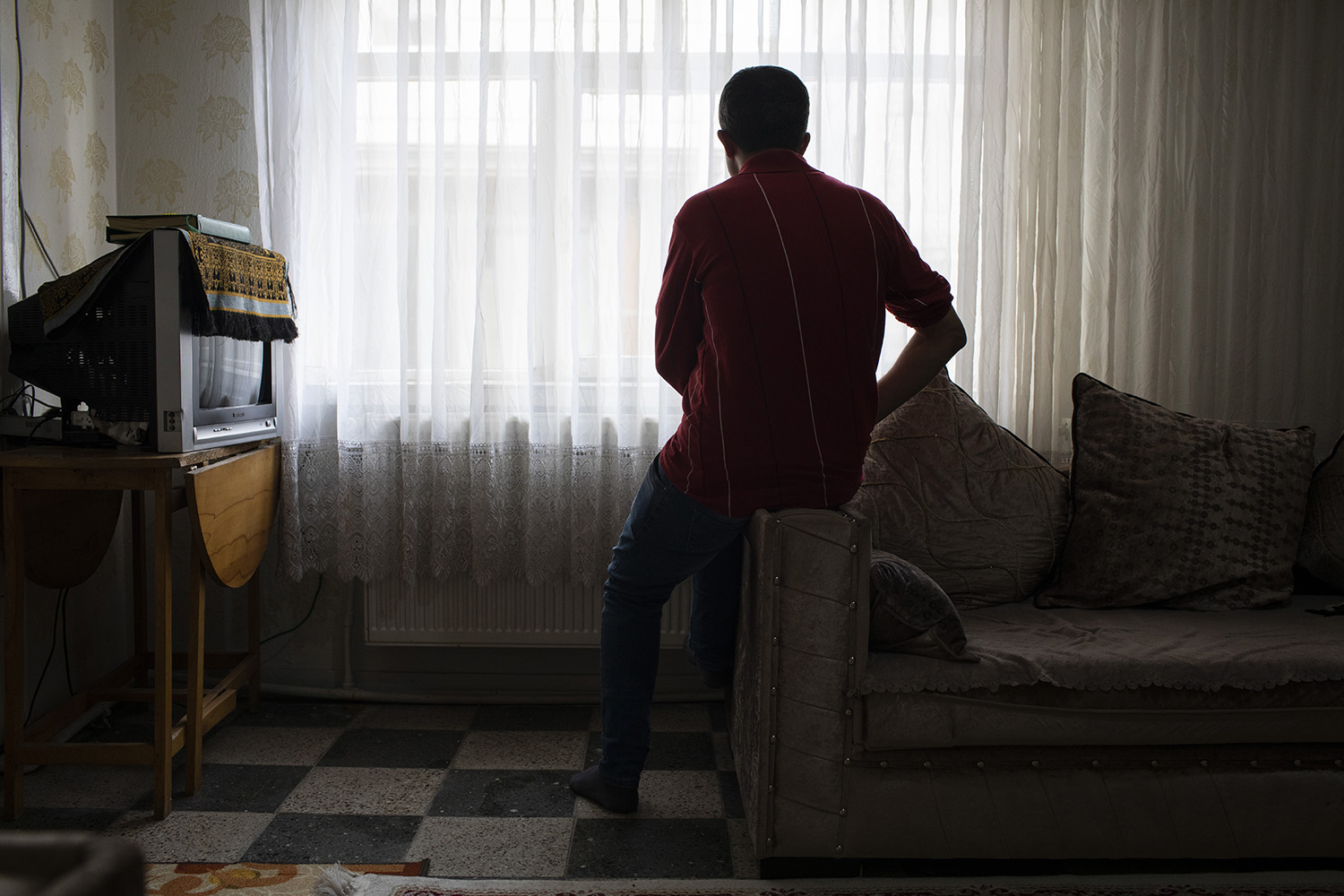 Qadir, a refugee from Afghanistan who didn’t want to use his real name, looks out the window of the apartment where he lives with his family in Van, Turkey, on March 3, 2019.

The Trump administration has made it prohibitively difficult for Afghans to seek asylum in the United States—even those who worked with the U.S. military in the field. Many are waiting for resettlement in Turkey, where they are only granted temporary protection. Moreover, Turkish authorities are increasingly detaining and deporting Afghan refugees, with some now unable to even register for temporary protected status, Umar Farooq reports for FP from Van, Turkey.

FP Conference Call—Please join us for a timely FP Insider conference call today at 11 a.m. EST on the Wuhan coronavirus. What can be done to stop the epidemic? What are the business and political impacts? And how can regular people stay safe? FP managing editor Ravi Agrawal and expert guests Laurie Garrett, Pulitzer Prize-winning FP science columnist, and James Palmer, FP senior editor and China Brief newsletter writer, will give answers and take your questions. Reserve your spot now.

North Korean leader Kim Jong Un’s aunt, Kim Kyong Hui, has been seen in public for the first time since her husband was executed for treachery in 2013. She was pictured seated next to Kim Jong Un at a Lunar New Year celebration on Sunday. Kim Kyong Hui, the sister of former leader Kim Jong Il, was widely assumed to be exiled or executed. (Such reports about North Korea are often unconfirmed, as FP’s Robbie Gramer reported earlier this year.)

NEW FOR SUBSCRIBERS: Want to read more on this topic or region? Click + to receive email alerts when new stories are published on Health, China, East Asia, Hong Kong

How Aafia Siddiqui Became a Radical Cause Célèbre

How Aafia Siddiqui Became a Radical Cause Célèbre