Is South Asia Prepared for the Wuhan Virus?

While there are few reported cases in South Asia so far, an outbreak of China’s new coronavirus could overwhelm the region.

Welcome to Foreign Policy’s weekly South Asia Brief. The highlights this week: Sri Lanka and Nepal report cases of the Wuhan coronavirus, the U.S. military confirms an aircraft crash in Afghanistan, and India gears up for a state visit from U.S. President Donald Trump.

Welcome to Foreign Policy’s weekly South Asia Brief. The highlights this week: Sri Lanka and Nepal report cases of the Wuhan coronavirus, the U.S. military confirms an aircraft crash in Afghanistan, and India gears up for a state visit from U.S. President Donald Trump.

South Asia is on high alert over the new Wuhan virus that has infected more than 4,500 people, mostly in China, and killed more than 100. Nepal and Sri Lanka have each confirmed cases, and there are others suspected in India and Pakistan. Five South Asian countries—Afghanistan, Bhutan, India, Nepal, and Pakistan—share a combined 4,000 miles of border territory with China, where the virus originated.

Given that the Wuhan virus can be spread during the incubation period—anywhere from two days to two weeks—there is a reasonable chance that South Asia may see a surge in reported cases in the coming days. India, the region’s biggest country, has extended temperature screening measures for passengers at 20 airports across the country. Though some Indian airlines have offered cancellation waivers for direct flights to and from China, thousands of passengers continue to come and go—increasing the likelihood of contagion.

Risk factors. South Asia’s countries have several characteristics that make them vulnerable to the spread of disease. First, many are among the most densely populated countries in the world. Literacy rates are low, general hygiene awareness is low, and access to clean water, gloves, and masks is limited. Private hospitals tend to be small and expensive, while government-run ones are mostly understaffed and unprepared for major crises.

In Nepal, for example, a man tested positive for the Wuhan virus after he was released from medical observation. According to the Kathmandu Post, other hospital patients were also discharged before their test results were received, suggesting that there could be several more cases in the coming days and that professional incompetence could worsen the crisis.

Finally, the region’s media fares poorly on most global surveys, making it unlikely that journalists could raise awareness quickly enough or hold governments to account. Reporters Without Borders ranks Nepal’s press 106th in the world, and India’s 140th. Fake news is a regional scourge, too. As millions of South Asians with low digital literacy have come online with smartphones in recent years, it’s more likely that misinformation and panic could spread during a crisis.

What’s next? Things could easily get bad. South Asia’s countries rank among the worst around the globe on health care access and quality, as shown below. While the world focuses on how China contains the virus, it is worth considering what could happen if the epidemic spreads to the developing world: Regions such as South Asia or sub-Saharan Africa will not only be slower to diagnose and report new cases, but they will also be ill prepared to deal with a fast-mutating virus. And as FP’s Laurie Garrett writes, China’s growing global interconnectedness as it pursues Belt and Road infrastructure projects has increased the likelihood of the spread of viral outbreaks.

India says, “Howdy, Trump?” Indian officials say that they are planning to host U.S. President Donald Trump for a state visit in late February. The proposed trip would involve a day in New Delhi and perhaps a visit to Indian Prime Minister Narendra Modi’s home state of Gujarat. Last September, Modi held a “Howdy, Modi!” rally in Houston that attracted tens of thousands of Indian American supporters—a showing that impressed Trump, who made a brief appearance. There are now some Indian media reports that Trump could headline a similar rally in Ahmedabad, Gujarat’s biggest city.

Pakistan’s military cracks down on critic. For two years, a protest movement demanding accountability from Pakistan’s military, the Pashtun Tahafuz Movement (PTM) led by Manzoor Pashteen, has been a real thorn in the brass’ side. Though other movements against the military in Pakistan have fizzled out or remained local affairs, the PTM went national in its demands for justice and democracy. Given the military’s outsized power, it’s no surprise that Pashteen was arrested on charges of criminal conspiracy and sedition this week. Other PTM leaders have vowed to keep up the fight.

U.S. military plane crashes in Afghanistan. On Monday, the U.S. military confirmed that an aircraft had crashed in Afghanistan’s Ghazni province, but it denied claims that the Taliban shot it down. It is unclear how many people have died in the crash or whether it will further complicate the peace negotiations underway between the United States and the Taliban. Meanwhile, in 2019—during much of which talks were ongoing—the United States dropped the most bombs over Afghanistan in nearly a decade, the Military Times reports.

Kashmir still left in the dark. Nearly six months after shutting down the internet in Kashmir when it revoked the territory’s special status, India has finally lifted some restrictions—unblocking a few hundred websites and restoring low-speed 2G internet access. But for many Kashmiris the gestures are empty: Most Kashmiri sites, including social media, remain off limits.

Among the allowed sites for Kashmiri internet users are video streaming services such as Netflix and Amazon, which now feature a wealth of TV shows created for growing Indian audiences.

On Netflix at least, Indian users spend more time watching movies than viewers in any other country. What percentage watched at least one film a week in 2019?

Budget time. Indian Finance Minister Nirmala Sitharaman will deliver the government’s budget on Saturday. The event may sound less than thrilling, but it is widely followed and broadcast live alongside commentary from corporate leaders and economic experts. This year’s budget is crucial, given that the economy slowed to a 4.5 percent growth rate in the last reported quarter. And next week, India’s central bank is scheduled to meet to discuss further cuts to interest rates.

Plane business. India has announced it is ready to sell a 100 percent stake in Air India, its ailing national carrier. An earlier move to sell a partial stake (76 percent) didn’t attract buyers. India’s government has been trying to divest from key holdings not only to cut losses and raise money but also to try to increase efficiency. 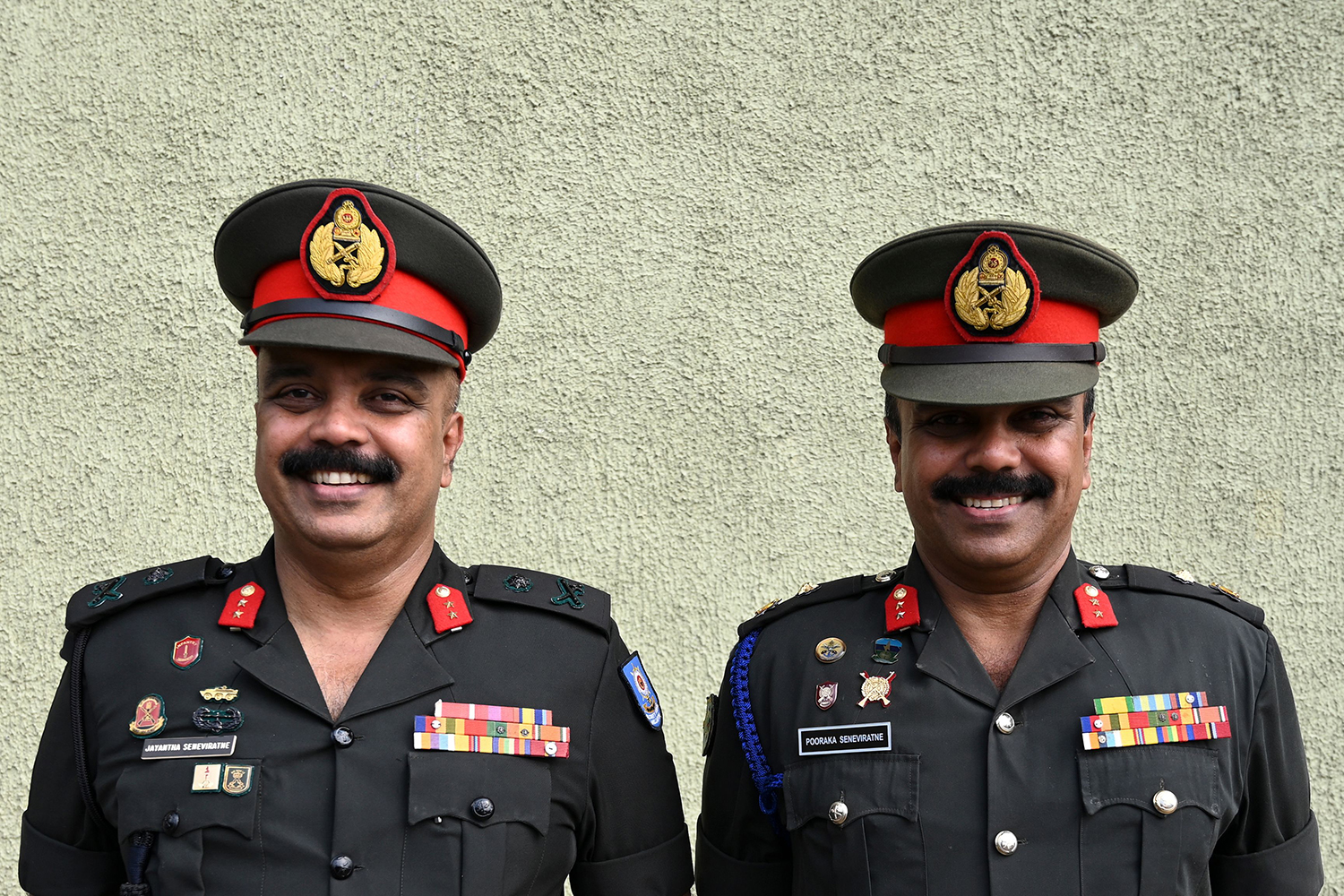 Sri Lankan Army Gens. Jayantha and Pooraka Seneviratne, pose for a picture during an attempt to break the world record for the biggest gathering of twins on Jan. 20 in Colombo, Sri Lanka.LAKRUWAN WANNIARACHCHI/AFP via Getty Images

Twin trouble in Sri Lanka. Last week, a Sri Lankan organization attempted to set a world record for the largest gathering of twins at a sports stadium in Colombo. The bid seems to have failed, but not because Sri Lanka has too few multiples. Instead, higher than expected turnout led to long registration lines, which meant that organizers weren’t able to follow Guinness World Records’ strict procedures.

Pakistan’s fight against polio. Due in part to public suspicion after CIA efforts to use vaccination programs to gather information on al Qaeda leader Osama bin Laden, giving out polio vaccines is difficult in Pakistan. But with new efforts to involve female health workers and religious leaders in the campaign, health workers in the country hope to rebuild trust and eradicate polio, Sabrina Toppa reports for FP.

According to Netflix, 70 percent of subscribers in India watch at least one movie a week on the platform. No wonder it is planning to invest hundreds of millions of dollars on content in India.

NEW FOR SUBSCRIBERS: Want to read more on this topic or region? Click + to receive email alerts when new stories are published on Health, China, India, South Asia