The Pentagon says if flat budgets continue it will need to rely on smaller, possibly unmanned ships.

The U.S. Navy is requesting $19.9 billion for shipbuilding in fiscal year 2021, which if approved by Congress would reflect a 20 percent cut from last year’s funding even as President Donald Trump pressures the service to fulfill his campaign promise to grow to 355 ships by 2030.

In the Pentagon’s budget proposal for the fiscal year, released Monday, the Navy is asking for $19.9 billion, down from $24 billion Congress appropriated last year. The request also seeks just eight new ships this year, down from 12 in fiscal year 2020.

The cuts reflect the Pentagon’s overall belt-tightening as officials prepare for an end to three consecutive years of growth under Trump. The department’s overall budget request this year is $705.4 billion—a decrease from $712.6 billion Congress appropriated for it last year.

Despite the proposed shipbuilding cut, defense officials stressed that the Pentagon remains “committed” to reaching Trump’s promised 355 ships, which is now mandated by law. Experts say growing the fleet is critical to compete with China, which is reportedly on track to reach 420 ships by 2035. But if budgets remain flat as projected, officials said the department may need to rely on smaller, cheaper—and possibly unmanned—ships instead of the large, expensive vessels that currently make up the fleet.

“As you know, 355 is the law, so we have a desire to get there, but the reality is if you look at the money we have to get there now and the flat budgets we have, we have to continue there,” said Vice Adm. Ron Boxall, the director for force structure, resources, and assessment on the Joint Staff, at the Pentagon on Monday.

Boxall said that to spend the Pentagon’s limited money more efficiently, the Navy will look at “a new warfighting concept” that includes moving to unmanned or “optionally manned” vessels that have “better concept value” than traditional warships.

But experts are skeptical that the Navy will reach 355 ships on the promised timeline if budgets remain flat. The Navy’s most recent force structure plan had the service reaching 355 ships by 2034. With a cut to shipbuilding this year, it’s not clear how the service plans to reach that goal even sooner

“The Navy’s problem is there is no foreseeable solution,” said Mark Cancian, a senior advisor at the Center for Strategic and International Studies, noting that the White House’s directive puts the service in an impossible position.

“They were locked into a 355-ship Navy, they didn’t want it, they backed off from that,” Cancian said. “But the White House came back and said no, the president said 355; 355 is the number.”

According to documents released along with the budget on Monday, the Navy currently has 293 battle force ships in industry, including 108 deployed around the world (the rest are typically undergoing maintenance or preparing to deploy). The overall inventory is expected to increase to 297 in fiscal year 2020 and 306 in fiscal year 2021.

The proposal to increase the number of smaller, lightly manned ships could be an enticing opportunity for smaller shipyards. There are only a handful of shipyards remaining that build large ships such as aircraft carriers, submarines, and destroyers. 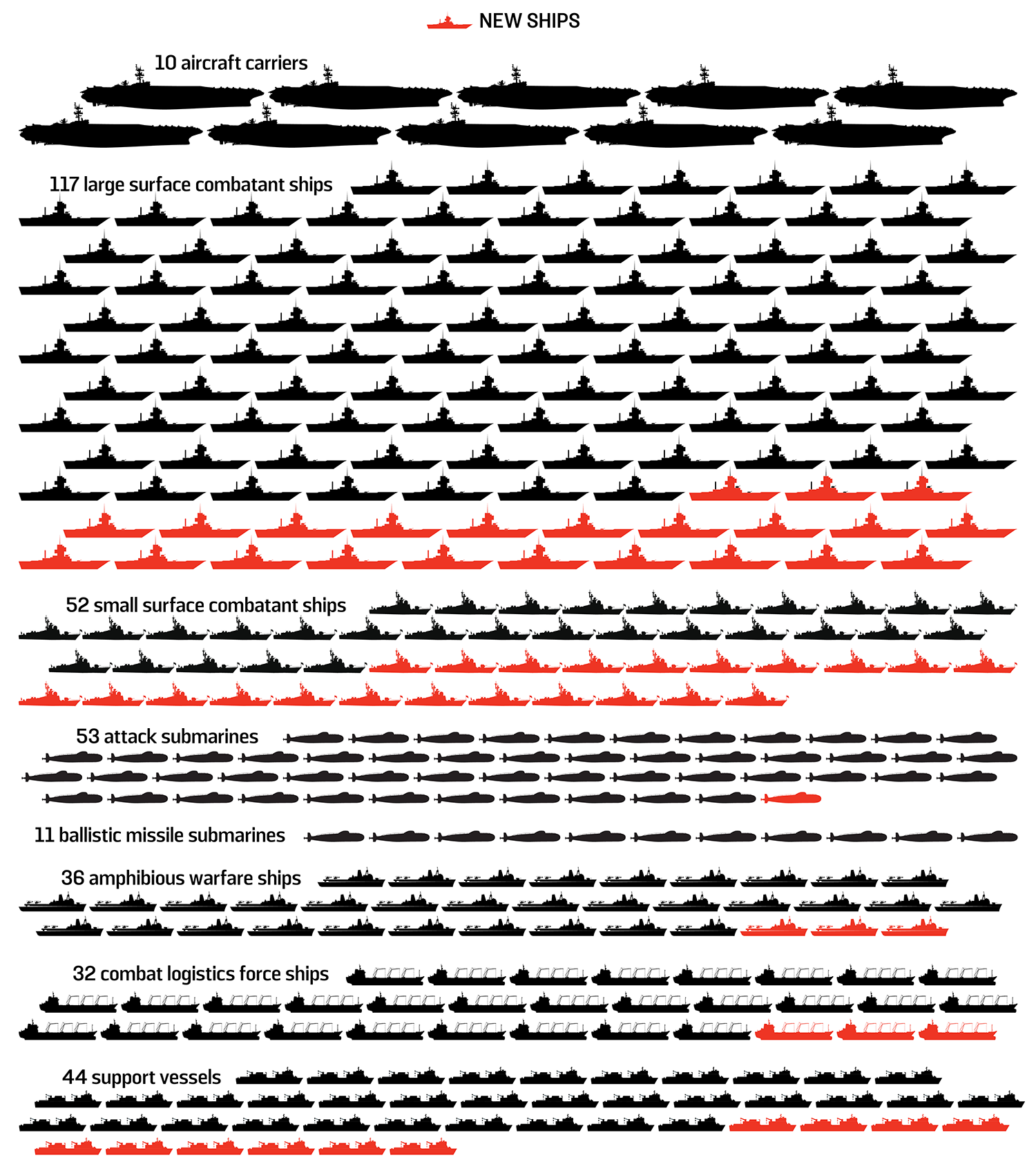 But the new shipbuilding blueprint may be dead on arrival on Capitol Hill. Driven by the powerful shipbuilding industry, lawmakers have historically pushed back on the Navy cutting its force structure. Last year, for example, members of Congress were outraged when the Navy proposed retiring the aircraft carrier USS Harry S. Truman, and the decision was ultimately reversed.

Lawmakers expressed concern on Monday after the Navy’s budget request became public. Rep. Rob Wittman of Virginia, the top Republican on the House Armed Services seapower and projection forces subcommittee, said that a decrease in the shipbuilding account “is the opposite direction we need to be going if we are to compete” with China.

“Simply put, the budget published today does not invest nearly enough in shipbuilding,” Wittman said, adding that he will be working on this year’s defense policy bill to add funding for the shipbuilding account. “I won’t allow us to lose ground.”

Experts also warned that the Pentagon already has massive modernization bills coming due in the next few years, including recapitalizing the nuclear triad—a project the Congressional Budget Office projects will cost roughly $500 billion through 2028. The Navy is already building new class of submarines and aircraft carriers; the Air Force, meanwhile, is building a new stealth bomber, air-launched cruise missile, and intercontinental ballistic missiles.

The Pentagon will propose retiring many of its older aircraft as new capabilities come online, but the cuts aren’t as steep as initially planned.

If defense budgets remain flat and modernization continues to eat up funding, the department may need to dip into operations and maintenance or personnel costs, said Todd Harrison, the director of defense budget analysis at the Center for Strategic and International Studies.

Along with the budget proposal, the Pentagon announced that it had identified $5.7 billion in savings that will be reallocated toward new priorities needed to counter China and Russia, such as hypersonic weapons technology and artificial intelligence. These savings are part of Esper’s internal review of the department’s so-called fourth-estate offices, roughly 50 defense agencies outside the military departments.

Update Feb. 10, 2020: This story was updated with comments from Rep. Rob Wittman, a Republican from Virginia.

The Pentagon will propose retiring many of its older aircraft as new capabilities come online, but the cuts aren’t as steep as initially planned.