Explaining a word and the culture that uses it.

“Jai Shri Ram!” Those were the words 25-year-old Kapil Gujjar shouted as he pointed his semi-automatic pistol at hundreds of unarmed women and children at Shaheen Bagh, a predominantly Muslim colony in New Delhi, on Saturday, Feb. 1. It was a cool, smog-infused afternoon, and Indians from all walks of life had gathered in a peaceful protest against a controversial new citizenship law that especially affects the country’s poor, women, and, perhaps most of all, Muslims. Gujjar fired three bullets in the air. The crowd scattered. Later, while being handcuffed by the police, Gujjar explained his motive: “In our country, only Hindus will prevail.”

Jai Shri Ram literally translates as “Victory to Lord Ram,” a popular Hindu deity. But while this seemingly harmless phrase originated as a pious declaration of devotion in India, it is today increasingly deployed not only as a Hindu chauvinist slogan but also as a threat to anyone who dares to challenge Hindu supremacy.

Gujjar’s message was aimed at India’s 200 million Muslims—the largest religious minority in a mostly Hindu population of 1.3 billion people—who have become unwitting targets in an us-versus-them culture war waged by Prime Minister Narendra Modi and his ruling Bharatiya Janata Party (BJP). The latest catalyst for tensions is the new Citizenship Amendment Act (CAA), which discriminates on the basis of religion. The law grants citizenship to refugees from Afghanistan, Bangladesh, and Pakistan who are Buddhists, Christians, Hindus, Jains, Sikhs, or Zoroastrians—but not Muslims—as long as they entered India before 2015.

Activists point out that the CAA goes against the secular principles enshrined in the Indian Constitution. Jai Shri Ram is today increasingly deployed as a threat to anyone who dares to challenge Hindu supremacy. And when coupled with a proposed national registry of citizens that could force people to prove their citizenship, the government’s plans could hurt the many millions of poor and illiterate Indians who don’t possess any documents to further their claims. Mass protests have seized the country’s cities and towns since the CAA was passed on Dec. 11; in scenes unprecedented in modern India, thousands of demonstrators have been forming human chains, singing the national anthem, and reading the constitution aloud. Shaheen Bagh, where hundreds of local Muslim women have staged a sit-in since the start of this year, has become the center of the national movement as more and more Indians—students, professionals, activists, singers, artists—join them every day.

Two days before Gujjar walked into Shaheen Bagh, another young man, a teenager, produced a pistol near the area and shot at anti-CAA demonstrators, injuring one and terrifying hundreds. The juvenile shooter, whom Indian law prohibits the media from naming, had apparently been prepared to become a martyr in what he perceived as a war for Hindu supremacy. In a Facebook video he recorded while on his way to Shaheen Bagh, he had left instructions for his fellow warriors: “On my final journey, cover me in saffron clothes and chant Jai Shri Ram.” The phrase has provoked terror in the capital since the beginning of this year: On the night of Jan. 5, a group of masked attackers affiliated with the Hindu far-right cried “Jai Shri Ram” as they entered Delhi’s Jawaharlal Nehru University, a hub of left-wing politics, and brutally beat up students who had been protesting against a recent fee hike. 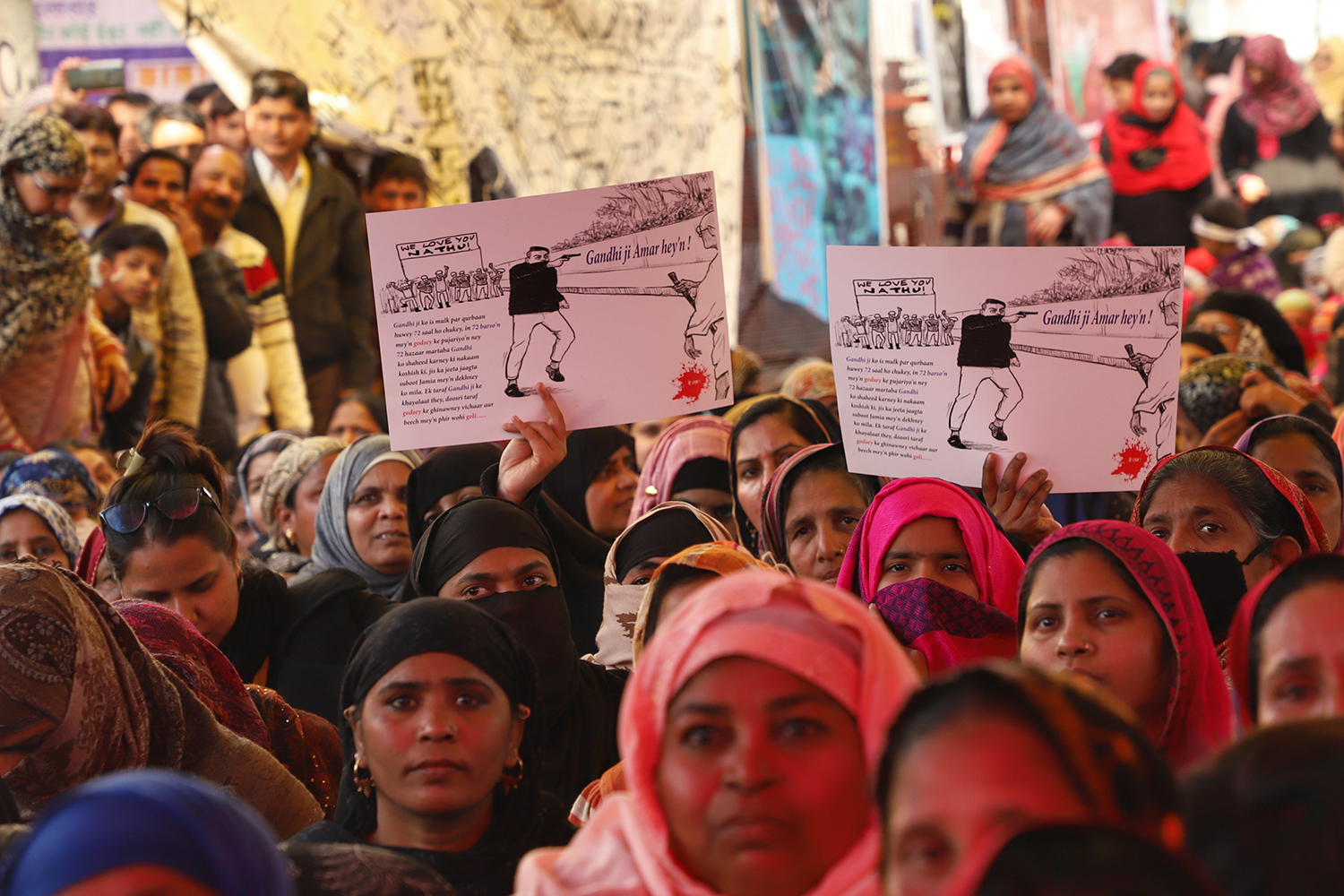 People take part in protests against the Citizenship Amendment Act and the National Register of Citizens at Shaheen Bagh in New Delhi, on Feb. 2, the day after a shooter fired on protesters there. Nasir Kachroo/NurPhoto via Getty Images

Ram, the popular Hindu god, is the protagonist of the Sanskrit epic Ramayana, said to be written sometime between the seventh and third centuries B.C. In modern, mainstream depictions of the Ramayana, Ram is extolled as the embodiment of the perfect man: an exiled prince who rescues his abducted wife and destroys an evil empire before returning home to assume his rightful throne. Ram is always described as just, brave, self-sacrificing, and righteous. His followers even justify the fact that he later abandoned his wife, Sita, after commoners questioned her purity—after all, they argue, Ram’s role as king superseded his duties as a husband. He was likely only following the social mores of his era.

Ram is always described as just, brave, self-sacrificing, and righteous.

In Hindi-speaking regions, Hindus have invoked Ram’s name for more than a century in regular greetings, in exclamation, and in folk songs. The deity’s political influence goes back even further. In the 12th century, a “sudden rush of temples [were] built for Ram” in response to the establishment of the first sultanate in Delhi in 1206, the journalist Shoaib Daniyal points out in Scroll.in. “In the 17th century, for example, two Marathi Ramayans were written, one which compared Mughal Emperor Aurangzeb to Raavan [Ram’s nemesis] and the other to Raavan’s gluttonous brother Kumbhakarna,” he writes.

But the phrase’s cultural relevance changed markedly in the last four decades, when it began to take on a different meaning. I first heard the words while watching the late 1980s television adaptation of Ramayana that aired on the national broadcaster Doordarshan. The program became a Sunday ritual in Hindi-speaking parts of India, and it depicted Ram as an ideal, pious man with a beatific smile—until he encountered evil, which he slew on sight. But Ram never used his special powers unless it was warranted. “Attacking the weak or the innocent to show your arrogance or your might doesn’t count as the dharma [duty] of the brave,” Ram’s spiritual mentor, Vishwamitra, advises while awarding him with celestial weapons.

Some purported followers of Ram now seem to have a different interpretation of dharma. Last year, across several incidents, dozens of poor and innocent Indians were attacked because they refused to say the words Jai Shri Ram. On June 18, a 24-year-old man was lynched in Jharkhand; on June 20, a 40-year-old cleric was hit by a car in Delhi; on June 23, a 25-year-old cab driver was beaten up in Thane near Mumbai; and on July 28, a 15-year-old boy was set on fire in Uttar Pradesh. In each of these attacks, the victims were Muslim, and they were asked to chant Jai Shri Ram by as few as three and as many as 30 Hindu assailants.

The slogan is deployed as effectively in violence as it is in entertainment. Last July, as Muslims were being forced to intone Jai Shri Ram, the country seemed gripped by a viral music video (now deleted) on YouTube titled “Jo Na bole Jai Sri Ram, bhej do usko kabristan” (Those who don’t say Jai Shri Ram, send them to their graveyards). The reference to cemeteries made clear that the message was directed at Muslims and Christians. Four people involved in making and uploading the video were later arrested. There is no stopping the messages of hate, however. On YouTube, one can now find dozens of songs glorifying Ram and denigrating minorities. Most of them mix Hindi hate speech with electronic beats. Some are so popular that they are requested at weddings and played in clubs. “Hindu Blood Hit,” for example, has been viewed more than 3.8 million times. Between psychedelic repetitions of Jai Shri Ram, the singer warns India’s Muslims that their time is up. Other viral songs can be geopolitical: “Jai Shree Ram DJ Vicky Mix” calls for a future in which “there will continue to be a Kashmir but no Pakistan.” 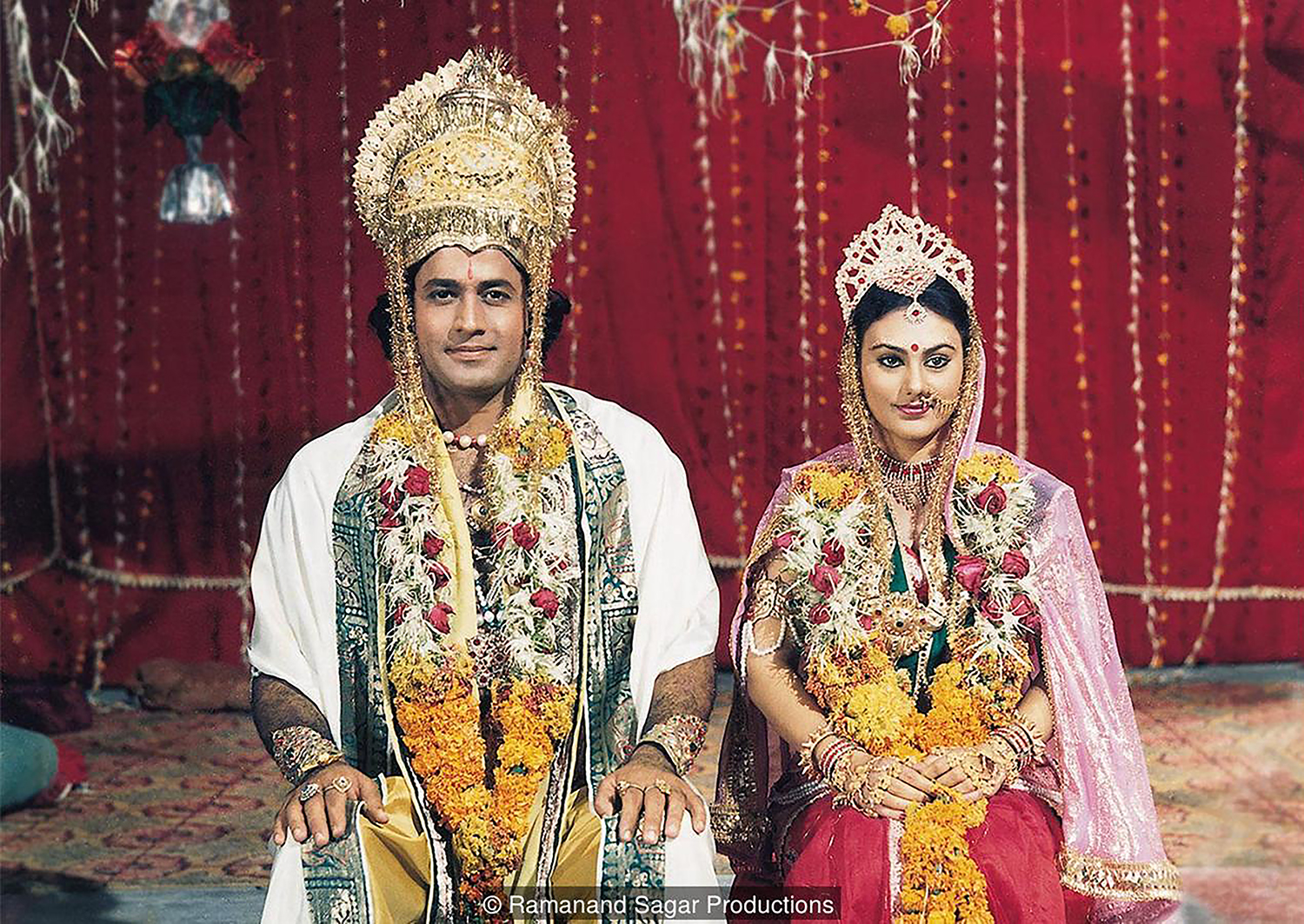 The 1980s television show of the Ramayana reached millions of Indians right as the BJP accelerated its project to unite Hindi-speaking Hindus around the figure of Ram. This was a bold political experiment. Although widely known as the hero of the Ramayana, which has been published in multiple languages and dialects, Ram was worshipped only selectively in India. In some parts such as Tamil Nadu, his worship elicits hostility by those who see the Ramayana’s narrative as racist toward Dravidians, the ancestral inhabitants of southern India. In West Bengal, where the majority of Hindus worship the goddesses Durga and Kali, Ram’s name doesn’t resonate widely.

But Ram’s imprint has spread in the years since the BJP chose him as the mascot for its project to build and cultivate a Hindu base of voters. The center for this project was the city of Ayodhya, where a 16th-century Mughal mosque occupied what some believe to be the site of Ram’s birth. Around the mid-19th century, regional Hindu organizations attempted to claim the site and build a temple to Ram on the mosque’s grounds. But then, in the 1980s, the BJP and its ideological allies turned the local demand for a Ram temple at the site into a sweeping Hindu nationalist movement. The slogan for this movement, which was led by BJP leader and then-Home Minister L.K. Advani, was Jai Shri Ram. The words were chanted, loud and clear, as the foundation for the temple was laid next to the mosque and bricks were loaded into trucks and trains headed for Ayodhya. And the same words tore through the city on Dec. 6, 1992, as thousands of Hindu volunteers pounded the mosque with hammers and axes. In a matter of hours, the building was razed; riots sparked throughout India. Jai Shri Ram now had an additional meaning: an expression of Hindu dominance and the BJP’s rise.

Last June, cries of Jai Shri Ram echoed through the Indian Parliament after the BJP was reelected with a sweeping majority, winning 303 of 543 parliamentary seats in an ugly, polarized election. The words were used to heckle Muslim legislators as they took their oaths to uphold the Indian Constitution. Five months later, India’s Supreme Court settled the country’s longest-running property dispute by ruling in favor of a Ram temple to be built in Ayodhya at the same site where the mosque was demolished by Hindu nationalists in 1992. The Muslim petitioners were granted 5 acres elsewhere in the city to build a mosque. On Nov. 9, as the government commenced arrangements for building the temple, Modi tweeted his response to the court verdict: “May peace and harmony prevail!” But those words seem lost amid the dog whistles sounded by senior leaders and amplified on social media with impunity. It is no surprise then that the devotees firing bullets at Shaheen Bagh have different intentions.

Back to India’s Secular Future

Protests over the Citizenship Amendment Act are rallying Indians of all stripes around their country’s foundational principles.

India’s New Laws Hurt Women Most of All

New Delhi wants people to prove their citizenship. But Indian women are the demographic least likely to possess paperwork.

Argument |
Nilanjana Bhowmick
Snigdha Poonam is a journalist with the Hindustan Times in Delhi and the author of Dreamers: How Young Indians Are Changing The World.
Twitter: @snigdhapoonam
Tags: India, Narendra Modi, Nationalism

Back to India’s Secular Future

Protests over the Citizenship Amendment Act are rallying Indians of all stripes around their country’s foundational principles.

India’s New Laws Hurt Women Most of All

New Delhi wants people to prove their citizenship. But Indian women are the demographic least likely to possess paperwork.